You might have seen your male cat showing affection to another male cat, perhaps more so than to female cats. Now, you might be wondering Can cats be gay?!

This is a topic to which a Yes or No type of answer cannot do justice. It deserves a thorough explanation, since it truly is a very complex subject.

Continue reading if you’re interested in gaining a good understanding of the sexual behavior of cats (and animals in general).

Contents show
1 Can Cats Be Gay?
1.1 What Is The Definition Of “Gay”?
1.2 You Might Have Noticed This…
2 An Important Disclaimer – Things To Keep In Mind!
2.1 Can Human Sexuality and Cat Sexuality Be Compared?
2.2 Does Homosexual Behavior Equal Homosexuality?
3 What Could Cat Gay Behaviors Mean?
3.1 1. Mounting
3.2 2. Penetration
3.3 Neutering is a procedure where the testicles of a male cat or the ovaries and uterus of a female cat are removed. These organs are sex-hormone factories, which are now gone.
3.4 3. Grooming
3.5 4. Sleeping Close To Each Other
4 Why Do Animals Engage In Homosexual Activities?
5 • Straightening Social Bonds
6 What Does Science Have To Say About It?
7 In Conclusion

Can Cats Be Gay? 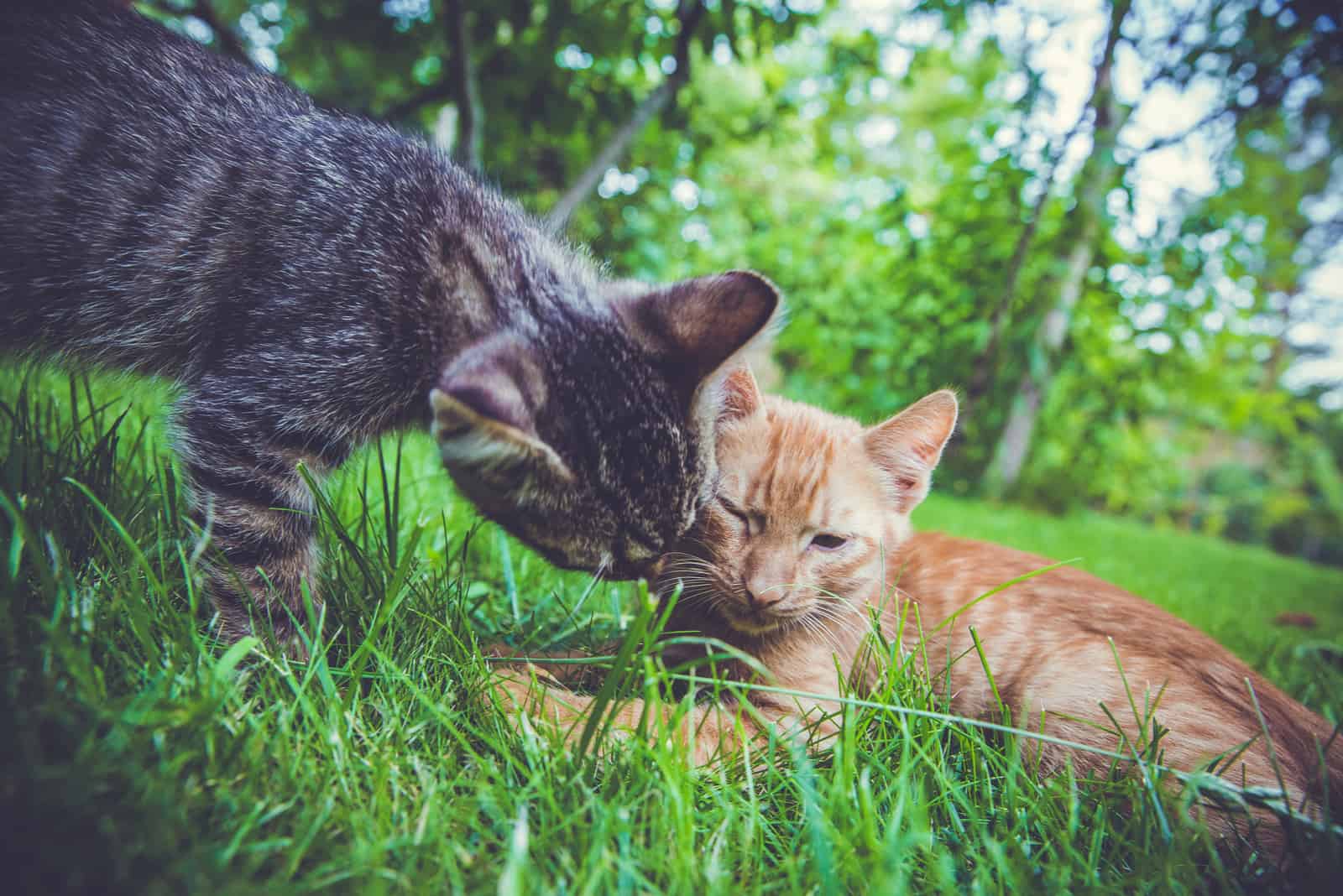 It is a tricky question indeed. It is tricky because of its formulation.

Sexual interactions between same-sex cats is not unheard-of. But truth to be told, it is quite rare in felines. There are many species where it is extremely common – but not really in cats. However, even though it is not frequently observed, it still does happen!

As we know same-sex sexual encounters do occur in cats – this makes for a worthwhile (and interesting) conversation!

What Is The Definition Of “Gay”?

In animals, homosexuality means same-sex behavior, including affectionate behavior, courting, copulating, and parenting (so practically the same as with humans).

When talking about animals, it is not recommended to use “gay“, “lesbian“ or any other similar term. The reason is that these terms are usually exclusively used to describe human sexuality.

There are a few cat behaviors that can catch your attention and make you question your cat’s sexual orientation. Is my cat gay? may briefly run through your mind when you observe these:

• Tomcats mounting each other

•  Female cats licking each other

• Disregarding the presence of an opposite-sex cat

• Sleeping together cuddled up to one another

Pet owners – have you ever noticed your cat doing any of these? Below, we explain what these behaviors mean!

An Important Disclaimer – Things To Keep In Mind! 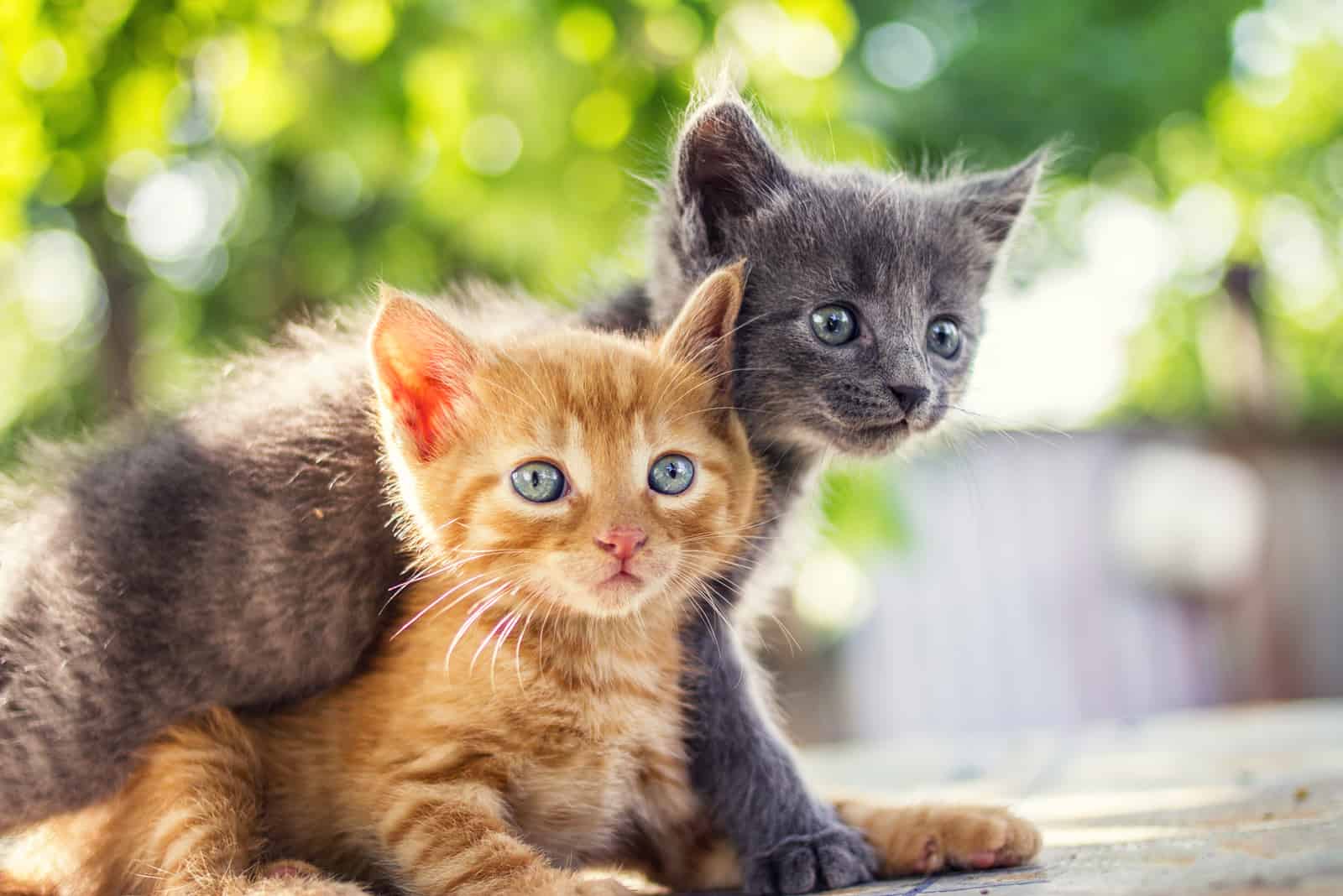 Animal sexuality and sexual orientation are not well understood! There is little research into this field due to:

•  Excess stigma around this topic

The lack of research and scientific evidence regarding cat sexual behavior, leads to another problem. People tend to assign what they know about human sexuality – to cats.

This is known as anthropomorphism, and it should be avoided! Some consider the terms ‘gay’ and ‘lesbian’ anthropomorpic, considering they are exclusively used for describing human behavior.

Can Human Sexuality and Cat Sexuality Be Compared?

No, they can not and they SHOULD NOT be compared. There are a few reasons behind this.

Humans can talk (obviously) and tell you exactly what they’re thinking. Because of this, analysis of sexual preferences is relatively easy and straight-forward. Considering cats cannot talk – we cannot make an in-depth analysis of sexuality.

Cats do not contemplate what they’re doing sexually in the way that we humans do.

They act on INSTINCT and do not make “consious decisions“ regarding their sexual acts. It’s not the same with humans, right?

Humans have extremely complex sexual emotions that accompany the sexual act – which is something that cats completely lack.

Because of this, it can be concluded that comparing sexual behavior of humans and cats is not right and should not be done. You can not compare gay cats to gay people.

This can do more damage than good!

If we were talking about humans, this would be an easy question. However, for cats (and animals in general), the answer is quite different.

Animals exhibit homosexual behavior occasionally – there are no animals that completely disregard the existence of the opposite-sex.

There are no records of, for example, a female cat showing its affection exclusively to other female cats for its entire life, without ever having any sexual acts with a male cat.

The same goes for male cats. If this were the case – you could say My cat is gay. But that never is the case, right?!

Does this occasional homosexual behavior mean you have a gay cat? Most would say no.

What Could Cat Gay Behaviors Mean? 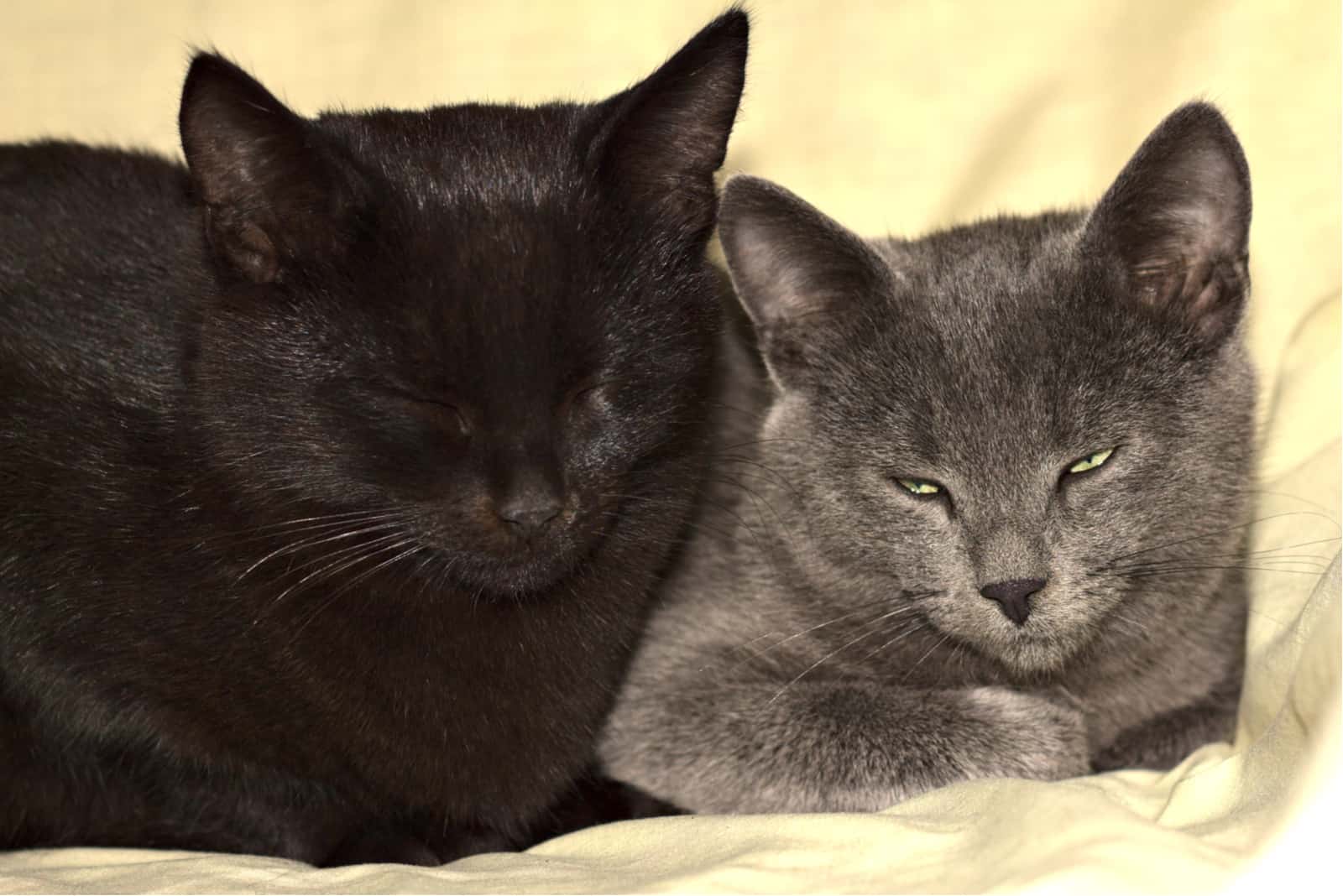 Mounting, penetration, licking, grooming, and similar signs of affection have been mentioned as some sexual behaviors you might notice between cats of the same sex.

Mounting is most commonly observed in dogs but cats are no strangers to it as well! Dogs do it over other dogs, on your leg or on the side of the couch – they don’t care!

Cats usually only mount other cats, and both males and females do it. It is one way of establishing dominance over another cat. You may notice it more in males and it is a type of sexual agression.

Neutering is a procedure where the testicles of a male cat or the ovaries and uterus of a female cat are removed. These organs are sex-hormone factories, which are now gone.

For males, that means the production of testosterone-laced pheromones is no longer possible. Now, what can happen is that another male can mistake the neutered male as a female. Why? Because there are no pheromones telling him This is a male cat.

This can lead to a lot of confusion – but there is a logical reason behind it.

Same-sex cats grooming their private parts is also something strange – but it does not have a sexual connotation to it.

Cats love grooming each other. It is their way of forming a bond and showing that they’re comfortable with each other. This is more likely to be seen in domestic cats.

Sure, it is a bit strange that they’re grooming the private area and not the face, but we can’t judge by human standards!

4. Sleeping Close To Each Other

When it comes to snuggling up and sleeping close to each other, this simply means the two cats are friends. It shows they feel comfortable and safe when in each other’s presence.

The same goes when the two cats in question are of opposite-sex – it doesn’t mean anything sexual, but rather social (or maybe they just like to cuddle!).

Why Do Animals Engage In Homosexual Activities? 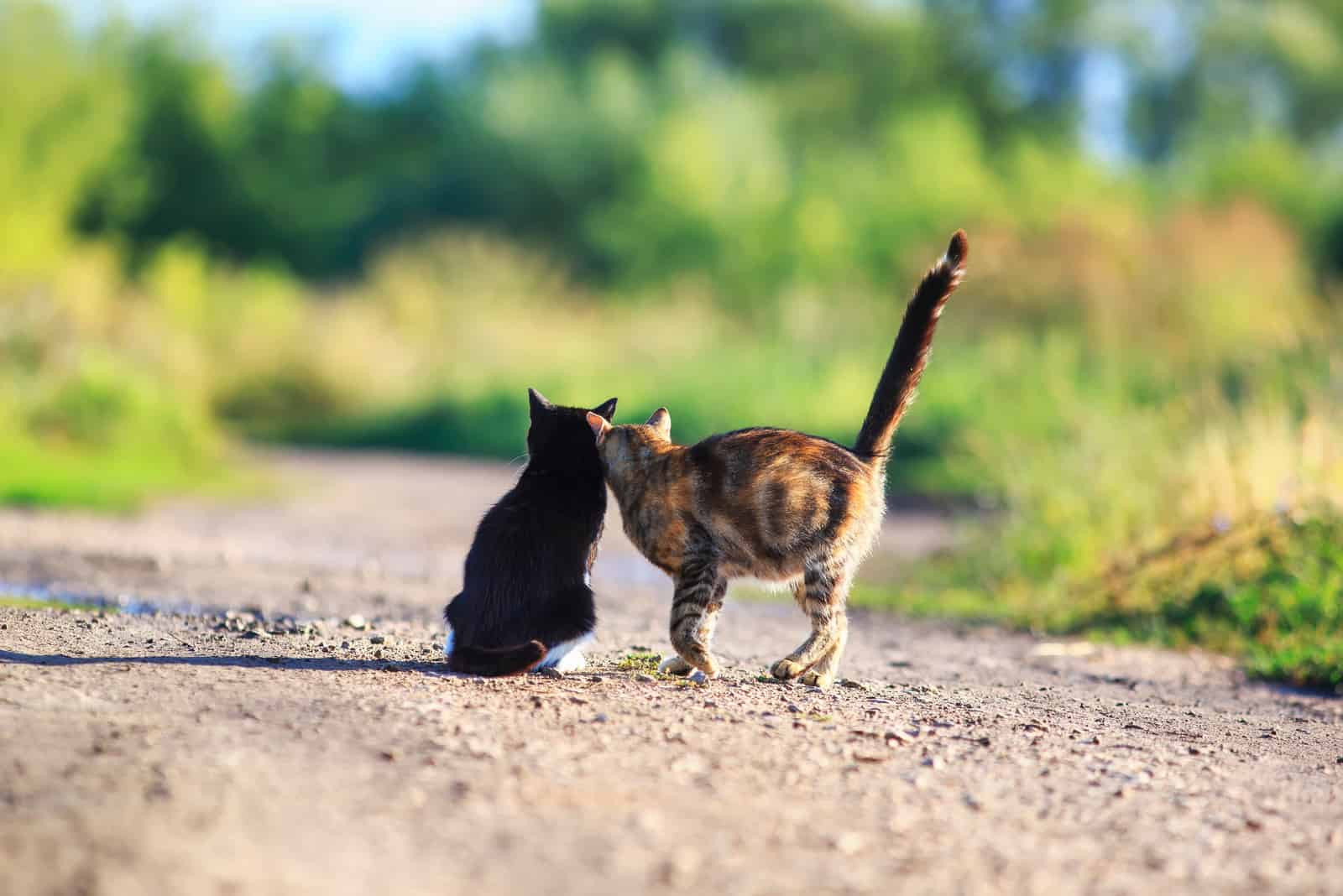 Social bonding is a known reason for engaging in homosexual activities, especially in males. In many species, males are dependent on each other to get to a specific goal. The goal can be courting females, hunting, or defending the group.

Some species have been observed to turn to sexual activities as a way to completely avoid conflicts. Most notable examples would be bonobos.

A major reason for same-sex relations can be pure satisfaction. Non-reproductive sex can be commonly observed in many species.

• Companionship due to imbalanced sex-ratio

In some populations, there can be more females than males. If this is the case, due to the lack of males, females turn to other females for partnership. The same goes if there are more males than females – this may result in males seeking a partner in another male.

This is especially true for male animals. They want to assert their dominance over another male by making them take a female mating position.

What Does Science Have To Say About It?

By fat the biggest and most detailed collection of data is within the book called Biological Exuberance: Animal Homosexuality And Natural Diversity. It is something of a holy grail when it comes to homosexuality in animals. It was written by Bruce Bagemihl and published in 1999, but it is still highly popular.

Bruce Bagemihl explains that non-reproductive animal behavior is a characteristic of many different species. This behavior is displayed in a vast array of ways.

It can be “same-sex courtship, pair-bonding, sex, and co-parenting—even instances of lifelong homosexual bonding in species that do not have lifelong heterosexual bonding”, as Bagemihl states.

Some species exhibit this behavior in only one particular part of their lives, while for others, this behavior persists throughout their entire life.

Also, some species exhibit it very rarely, while for others, it is observed very often. It can be also be the case that homosexuality is observed in only one sex of the species, and not in the other.

Over 1500 species are known to engage in homosexual activity (primates, giraffes, albatrosses, lions, penguins, dolphins, and many more). The true number is expected to be much higher, but there is little information due to the lack of research in this field.

This topic is still taboo, so many researchers are not very enthusiastic about going into this field of research.

Now you see why the question Can cats be gay is a complicated one to answer. The most concrete answer we can provide is the following:

Cats can and do exhibit homosexual behaviors, such as mounting, licking, and grooming members of the same sex. But your cat being exclusively gay its entire life, without any contact with a cat of opposite gender – this is unheard of.

The most likely answer to Can cats be gay? is – No, but they can be involved in what could be considered ‘gay’ activities.

This might be observed in many different animal species too: penguins, giraffes, monkeys, ducks, lizards and hundreds of other examples. You name the species, there is most likely evidence of homosexual behavior among the members.

We know one thing for sure – the animal kingdom is full of different sexual activities with many different meanings behind it!

At the end of the day, your cat’s sexual behavior really doesn’t matter nor it should matter. All cat lovers just want their furry friends to be happy, healthy, and safe!

Can Male Cats Mate With Other Male Cats? Explanation Below!