Kinkalow cats are a unique and unusual feline breed that is relatively new and still quite rare.

The Kinkalow cat is known for its highly active and playful demeanor, therefore it’s only to be expected that this rare and interesting cat breed has captured the attention of so many cat lovers.

This adorable cat is the offspring of another dwarf cat breed, which explains its small height and short legs.

However, despite their small size, Kinkalow cats have a powerful presence. Many people refer to the Kinkalow cat breed as the cutest breed among domestic cats.

Continue reading to get more information and find out some fun facts about the Kinkalow cat!

All About The Kinkalow Cat Breed

Origin Of The Kinkalow Cat

The Kinkalow cat is a fairly new breed. Kinkalow cats originated in the USA in the mid 1990s when breeder Terri Harris mixed the Munchkin cat and the American Curl.

The original name of the breed was Munchkinlanes Kinkalow Louie. The name ‘Kinkalow’ most likely refers to the kink in this cat’s ears, and the fact that they are short in height.

The Kinkalow cat breed is very clearly linked to its parent breeds; most people recognize the breed characteristics as having short legs because of the Munchkin parent, and curled ears because of the American Curl.

Characteristics Of The Kinkalow Cat 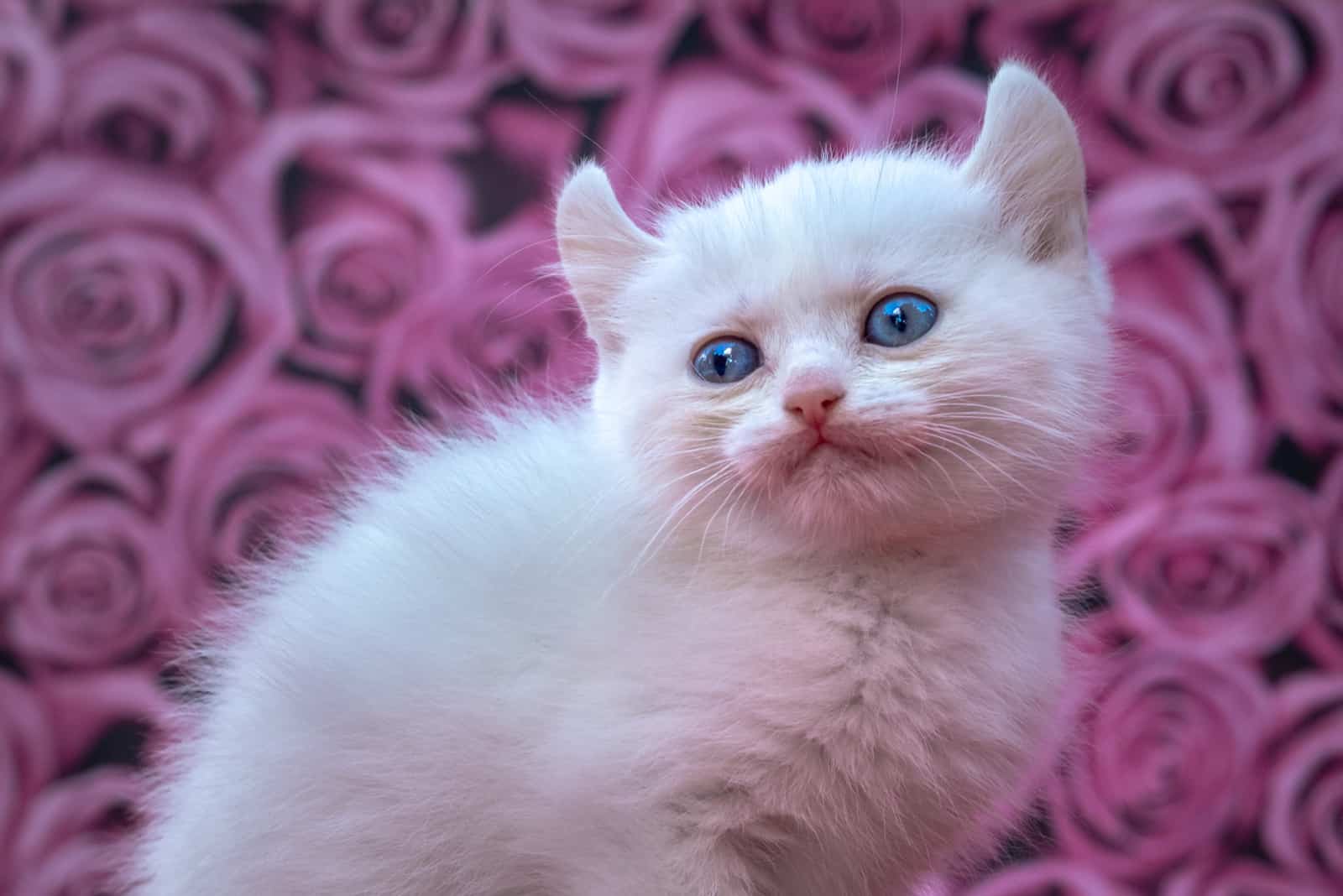 The Kinkalow cat breed is characterized and recognized primarily for its cute appearance, having curled ears and short legs. Kinkalow cats are quite rare so you might have a hard time finding a kitten.

Their appearance is interesting and curious and will definitely catch anyone’s attention.

Let’s see some more detailed info about the breed characteristics of the Kinkalow cat.

Kinkalow cats have a long body and really short legs which they get from their Munchkin parent breed, and cute little curled ears, which means they resemble the American Curl as well. Some Kinkalow cats don’t grow up to have curled ears.

Kinkalow cats have a solid, muscular body, and a head that‘s shaped like a tiger’s.

They have sparkling rounded eyes, as do most dwarf breeds. The tail of a Kinkalow cat is long and silky and adds to their graceful look.

The medium-length coat of a Kinkalow can be a range of colors and patterns.

Kinkalows are little cats that are typically seven to eight inches tall, and they usually weigh between three and seven pounds.

Kinkalow cats have a medium-long coat that may be a range of colors and patterns.

The coat of a Kinkalow cat may be one of several coat patterns, including solid, tortie, tabby, and calico.

They can be in a wide variety of colors too, including white, orange, cream, black, and gray. 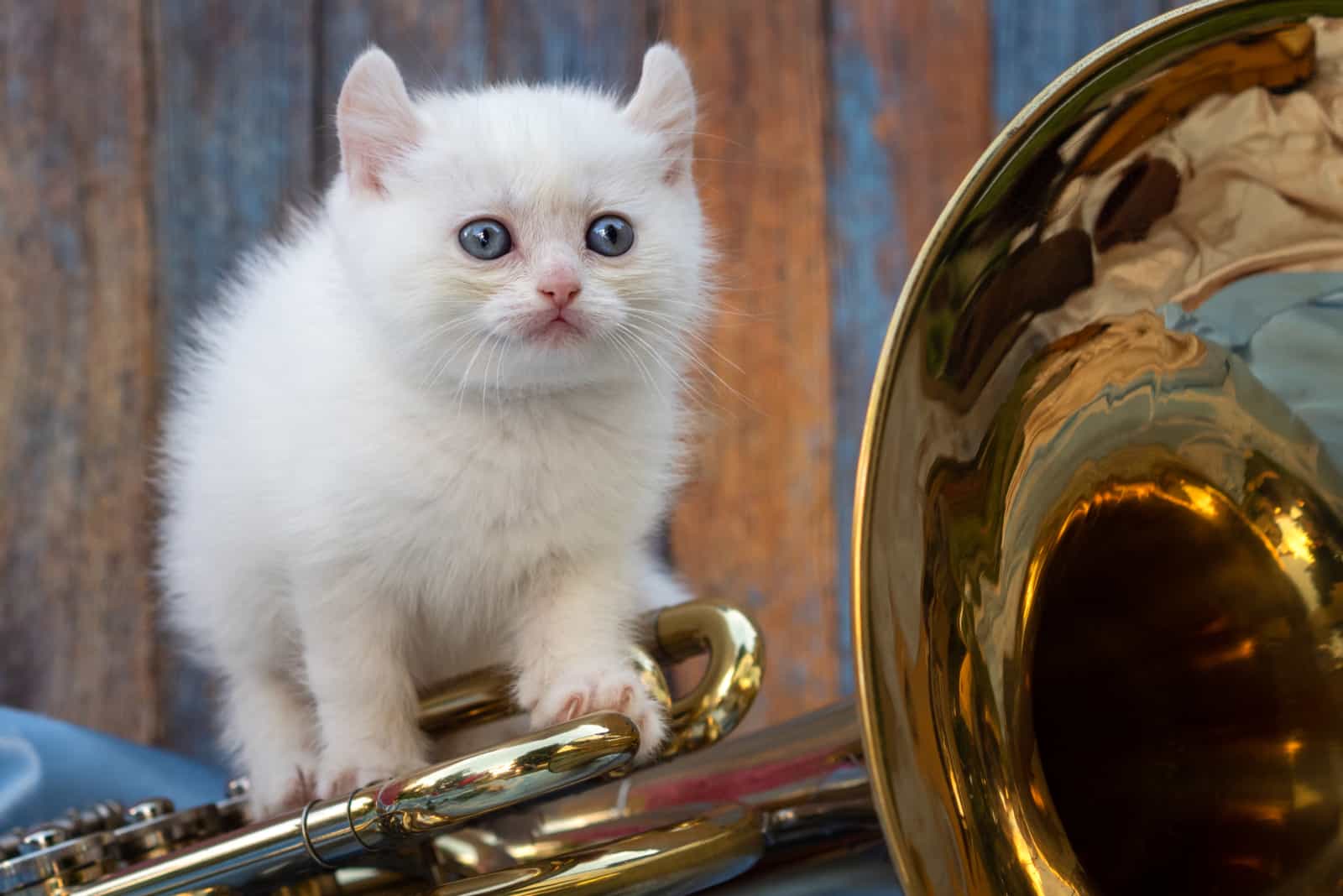 These fluffy buddies are outgoing cats that are keen to entertain their owners and will enjoy spending time with people.

As Kinkalow cats are very obedient and intelligent, they are also very trainable. They will quickly and easily learn new tricks and games.

They are especially good at picking up important things like using the litter box. You won’t even have to show them the cat tree as they’ll be all over it, because they love chilling in high places.

Kinkalows are affectionate, lively cats who enjoy cuddling. They can be calm, they can also be energetic as well, and love racing from room to room.

They are also recognized for their intelligence, therefore some clever cat toys, cat trees, and a lot of playtime will be required to keep them intellectually and physically challenged.

Kinkalows are amiable and loving cats who would fit in well in any cat-loving household. They are great for families, as they are good with kids.

Kinkalows are a great choice for a pet, especially for families that have school-age kids or younger kids because they’re also energetic and highly playful.

Kinkalows are an appropriate choice for first-time cat owners as they aren’t high maintenance.

Kinkalows are extremely sociable and it is great to have different forms of socialization for any pet. It is a great idea to welcome a Kinkalow into a family with other pets as well.

Having other pets means that your Kinkalow cat will have additional playtime buddies and more activity for their energetic temperament.

Kinkalow cats, like some other cat breeds (e.g. the Maine Coon) are known for having dog-like characteristics, so don’t be surprised if you see them running to greet you at the door, or running about with your dog.

A cat’s years are influenced by a variety of circumstances, including adequate health care and living conditions.

Kinkalow cats have a rather long life expectancy of 12 to 15 years.

The Kinkalow is generally a healthy cat breed, but because of the length of their legs in comparison to their body length, they, like most dwarf cat breeds, have a major risk of spinal injury.

It is critical to monitor your cat’s back health for any symptoms of pain or discomfort.

Other potential health issues include ear infections (as a result of their curled ears). If you observe any indicators of pain, contact your vet right away. 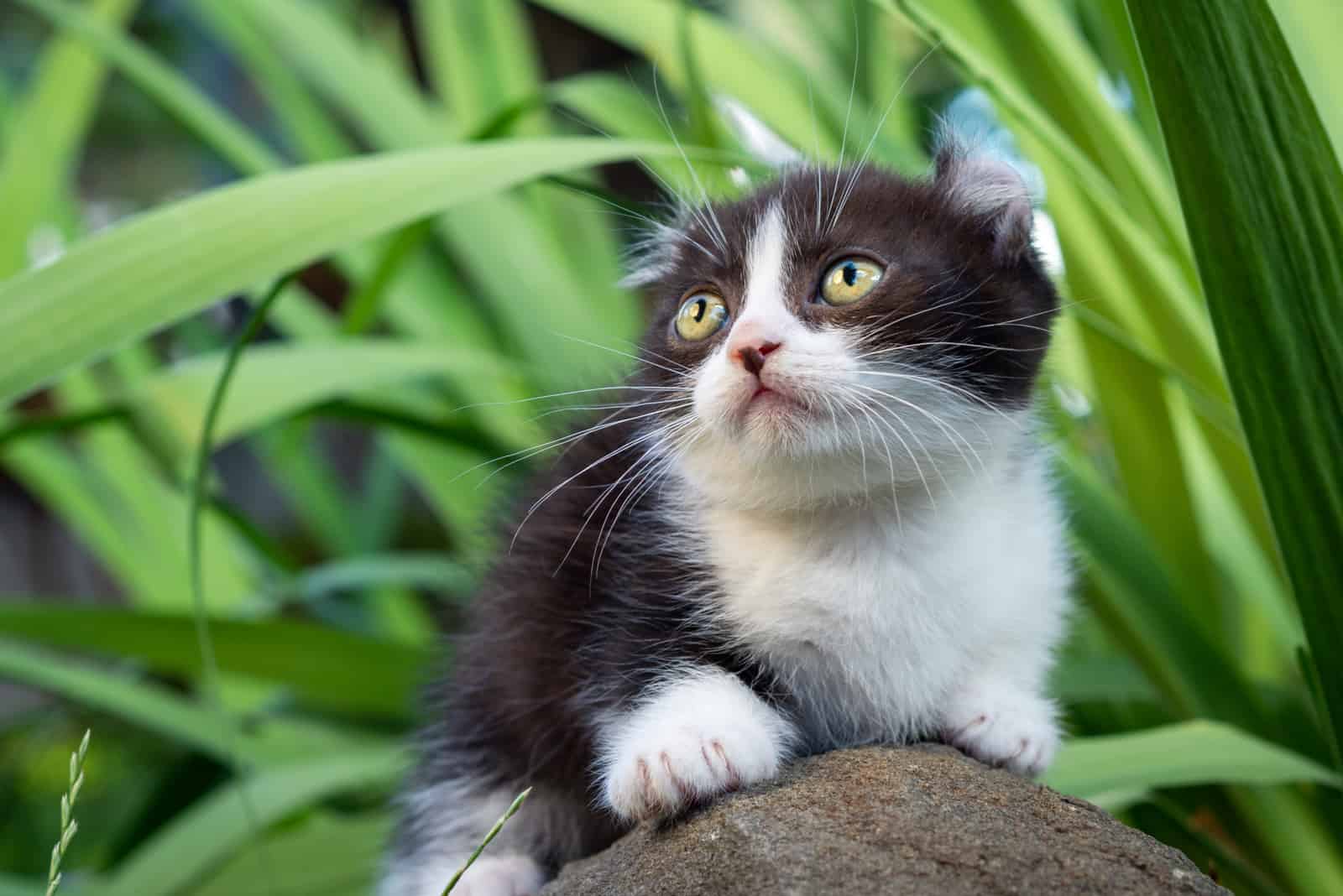 You must bathe and brush your Kinkalow cat on a regular basis. Even though cats are known for their excellent self-cleaning skills, some dirt still stays stuck to their fur.

Bathe your Kinkalow on a regular basis to clean off any dirt that’s left after the cat cleans itself, for a soft and beautiful Kinkalow coat.

Bathing your cat every four to six weeks is recommended by the National Cat Groomers Institute of America. Most cats are scared of water, or they simply don’t like it.

Bath time may be made more pleasurable by allowing cats to play with toys while bathing them, or you can even use dry shampoos for a more pleasant experience.

Kinkalows, like other cats with adorable curled ears, are more prone to earwax buildup and ear infections.

To reduce the risk of ear infections, gently clean your Kinkalow’s ears on a regular basis using a cotton bud and a high-quality cleaner.

When selecting ear cleaning solutions, it is essential to visit your vet and ask for advice and instructions.

Although cats like self-grooming, Kinkalows prefer to spend time with their beloved humans, which is why regular grooming is not only important and good for their health but also for bonding with you and getting their much-needed attention and care.

Kinkalow cats don’t require a special diet; they usually have healthy eating habits and aren’t prone to gaining too much weight, since their physique can only endure a healthy body weight.

However, you should feed them high-quality cat food that is going to keep their coat, skin, and weight in great shape.

Furthermore, your Kinkalow kitten will require a different type and quantity of food at each stage of its life. This is something your vet will instruct you on anytime there’s a need for a change.

Kinkalows are well-known for their playful nature. To keep their minds busy, they require regular playtime and cat toys that involve intelligence and strategy.

Spending quality time with a Kinkalow cat is always encouraged as they like spending time with their owners more than anything. Kinkalows are easily trained and are very intelligent, active, and lively.

Kinkalows can be taught and trained from an early age, as it’s easy to teach them tricks and teach them to stop any unwanted behavior such as scratching around the house.

It doesn’t take much effort to keep a Kinkalow cat active and healthy. You won’t struggle to get them to exercise, as they’ll willingly do it themself.

Kinkalow cats need a lot of playtime, so toys, cat trees and climbers are ideal, especially tall structures as they’re known for perching up on high places.

When it comes to devoting your time to your pet, it shouldn’t be too much hard work, but they do need about 20 minutes of real exercise each day.

We all know that all cats, while they’re young, will play, jump, wander, and explore for almost the entire day, so you’re not required to do much when it comes to encouraging activity.

You do need to teach a Kinkalow not to scratch around the house, so it would be a great idea to provide cat scratchers, climbers, or cat trees with scratching posts.

Kinkalow cats will easily learn where it’s okay to scratch and how to use a litter box.

Some bad habits may remain in your Kinkalow cat’s behavior if you don’t act on it, and fix it with training. For example, a Kinkalow cat will want to follow you around and go to the bathroom with you.

At some point, this will annoy you and it is best to teach them from an early age what behavior is acceptable and what isn’t.

Bear in mind that Kinkalow cats are also very affectionate and sensitive, so you should use a positive tone and methods to achieve what you want.

Never yell, shout, or hit a Kinkalow (or any cat!), as this won’t achieve anything positive. You can use the tried and tested rewarding method.

When your Kinkalow kitten does something good, reward them with a treat, and see them doing it again because you’re on the right path to improvement. 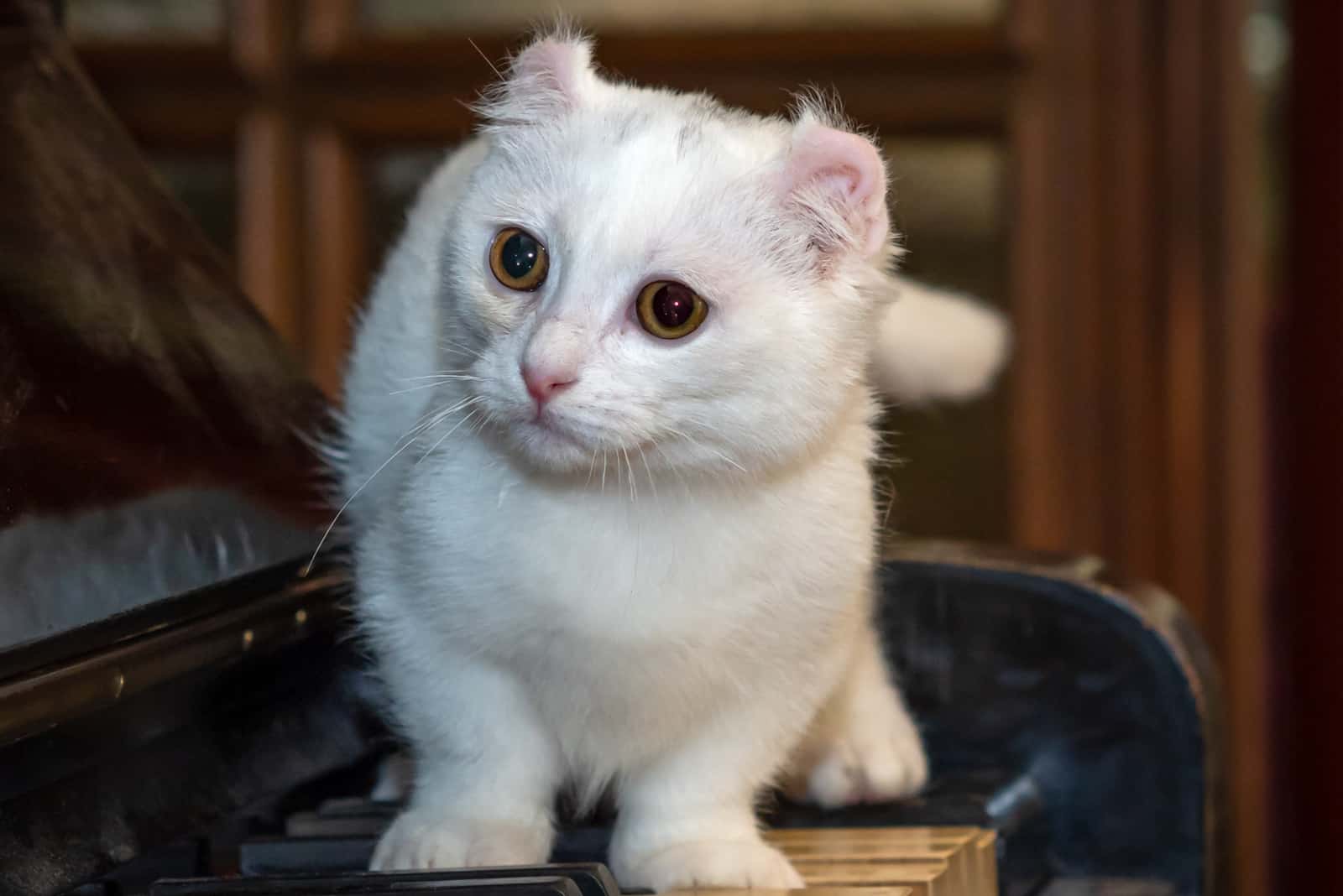 Average Price Of A Kinkalow Kitten

Kinkalows are expensive because they are unusual and very rare cats with many outstanding characteristics.

The cost of a Kinkalow is determined by various factors, including the individual cat breeders, their location, and the availability of Kinkalow kittens/cats at the time.

These adorable felines will set you back a fair buck. Kinkalows typically cost roughly around $2,000 from a registered and reputable breeder, and due to the fact that it is a very rare cat breed, you probably won’t find it in shelters or rescue centers.

🐾 Kinkalow cats are generally less vocal than most other domestic cat breeds.

🐾 The Kinkalow cat breed is registered by TICA and TDCA.

🐾 Some Kinkalow cats don’t grow up to have curled ears.

🐾 When a Kinkalow kitten is born, it has straight ears that curl back as it grows up.

🐾 Other than physical traits, the Kinkalow cat is known for its lively, energetic temperament. 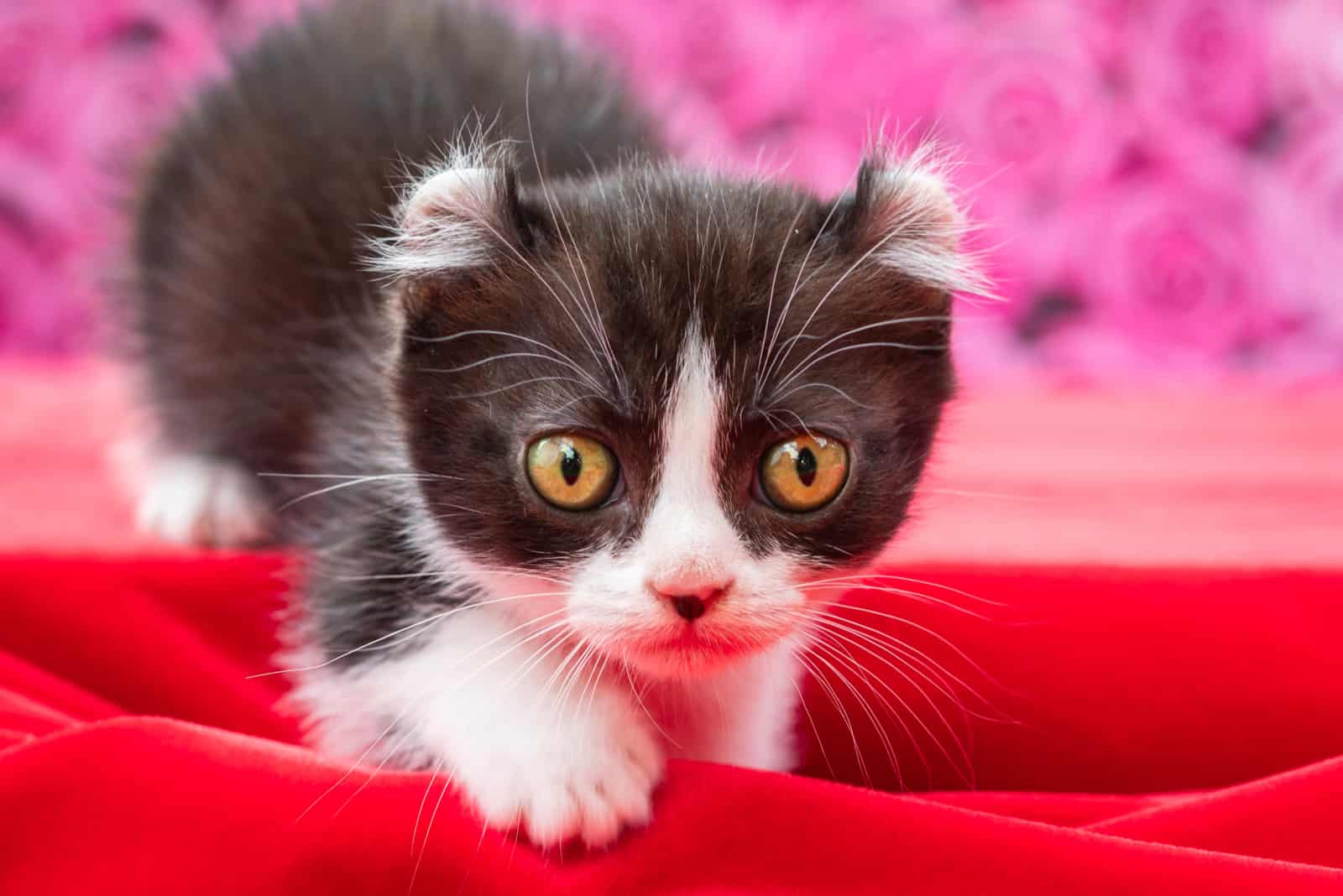 Kinkalow cats are a unique and unusual feline breed that is relatively new and still quite rare.

The Kinkalow cat breed is known for its highly active and playful demeanor, so it’s natural that this rare and interesting cat breed has caught the attention of so many cat lovers.

Kinkalow cats make great family pets, since they are friendly towards children and people of all ages.

Kinkalow cats also get along well with other cats, dogs, and different pets. They’re extremely playful and will love playing with a buddy, no matter its breed.

Many people refer to the Kinkalow cat breed as the cutest breed of all domestic cats.

When it comes to nutrition and health, Kinkalows are generally quite healthy and don’t require any special diets.

Before you decide to adopt any cat breed to be your pet, think and plan ahead. After all, it’s another life to take care of.

All in all, every home is a much happier place when there’s a pet living there.