Sometimes, as well as a lovely temperament, cat lovers want a cat with a particular color or pattern. Sometimes it’s difficult to reconcile these two things.

However, if you’re looking for a calm and gentle cat with a docile temperament and the possibility of various colors, then this is your lucky day, because we have a suggestion for you!

Ragdoll cats are very beautiful, calm, and friendly cats. They’re very dependent and adore being in your company. As well as having a lovely, friendly temperament, this is one of the most beautiful cat breeds.

There are different ragdoll cat colors and patterns as well. Here’s the list!

Speaking of colors and patterns, a chocolate point ragdoll cat is one of the rarest raggies. So, if you want to be unique and own this particular cat, read on to find out more about it! 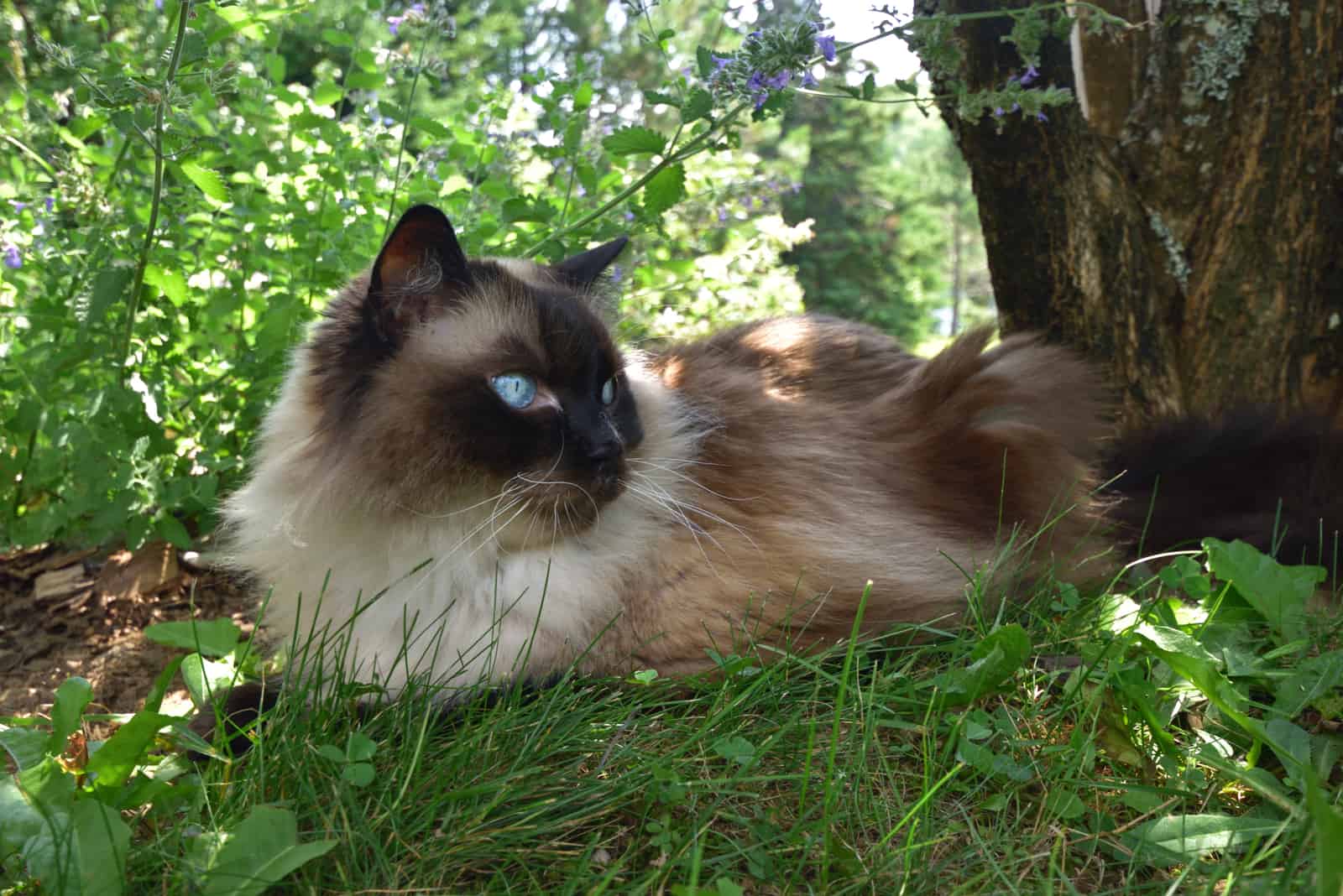 Amongst these colors, the chocolate point ragdoll cat is the rarest, so if you decide to buy a purebred ragdoll cat from  a breeder, you better prepare yourself! They can cost from $500 to $2500 for show quality.

The body of the ragdoll cat is an ivory color, and this may be lighter around the cat’s stomach and chest. The color of the points is, of course, chocolate brown in a warm tone.

Its nose and each paw pad are cinnamon pink in color, and they have huge eyes in the brightest color blue which is a famous characteristic of the breed.

Chocolate point ragdoll cats may appear in different patterns and these are recognized and registered by cat showing organizations.

The Patterns Of The Chocolate Point Ragdoll Cat

The body color of the chocolate lynx point is ivory in color, and the shading will usually take the form of cream mottling.

They’re very recognizable because of their tabby markings. Their points are distinctive and look like warm milk chocolate, separated by the lighter background color.

Cats with this specific pattern have a cinnamon coloured nose and paw pads. However, a nose in a pinkish cinnamon color is more sought-after.

Chocolate bicolor ragdolls are recognizable  for the inverted V marking on their face. From the chin and all across the belly, their fur is snowy white, while the top is cream in color. Around their big blue eyes, you will notice a dark brown color, and this is also found on the ears.

The paw pads and nose are usually pink in color. 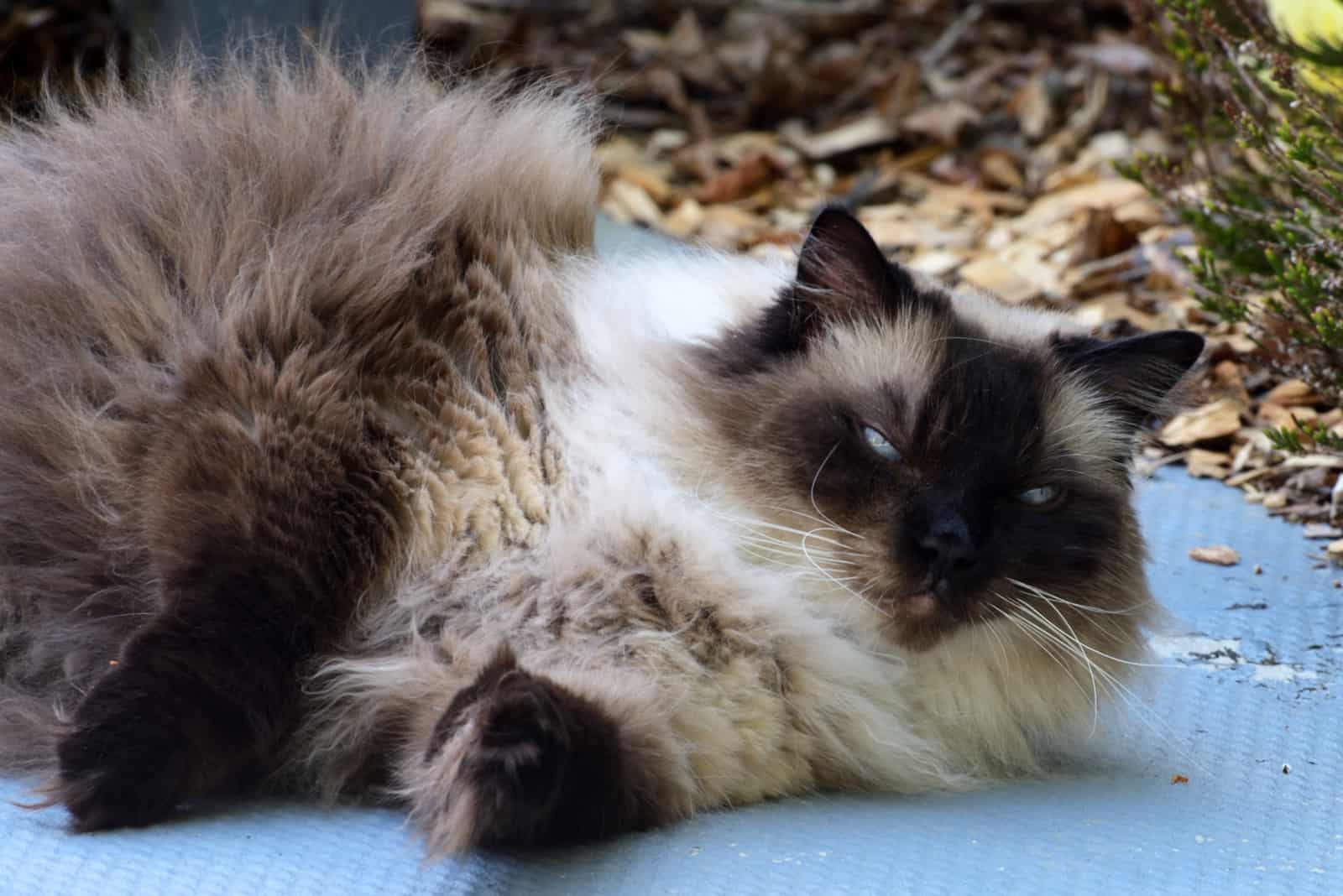 A chocolate colorpoint ragdoll cat has specific markings that are similar to those of a Siamese cat. The body is of an ivory cream color. Other parts, such as the nose, ears, paws, tail, and face are a warm, chocolate brown.

Finally, the nose and paw pads may be pink or cinnamon but it is usually preferable that they’re the same color as the dark points.

A Chocolate Mitted Ragdoll Cat is almost the same as a chocolate colorpoint ragdoll. The difference is that chocolate mitted ragdolls have white mitts on their paws and chin. The mittens on the back paw can go right around their hocks, and their front paws may have mittens right up to the wrist.

From their chin, there is a white stripe across their belly. Interestingly, they sometimes have white marks on their face in pretty shapes such as a star, hourglass, or blaze.

The body of the chocolate tortie point is ivory in color. In older cats, the fur may seem mottled.

The points are a warm milk chocolate color, and warm tones may appear with traces of red or cream.

The paw pads and the nose leather are cinnamon in color, and a flesh tone or coral pink color are usually preferable.

This color pattern  is a body that is ivory in color, and light brown mottled markings that may have cream and red tones. The point of a chocolate tortie is chocolate brown which can be separated by the light color.

The nose of the chocolate tortie is usually cinnamon in color. However, the proper color for the nose is edged with cinnamon pink. Sometimes, coral pink may be present.

Just like the nose, the paw pads can be cinnamon in color or they can be mottled with coral or flesh pink. 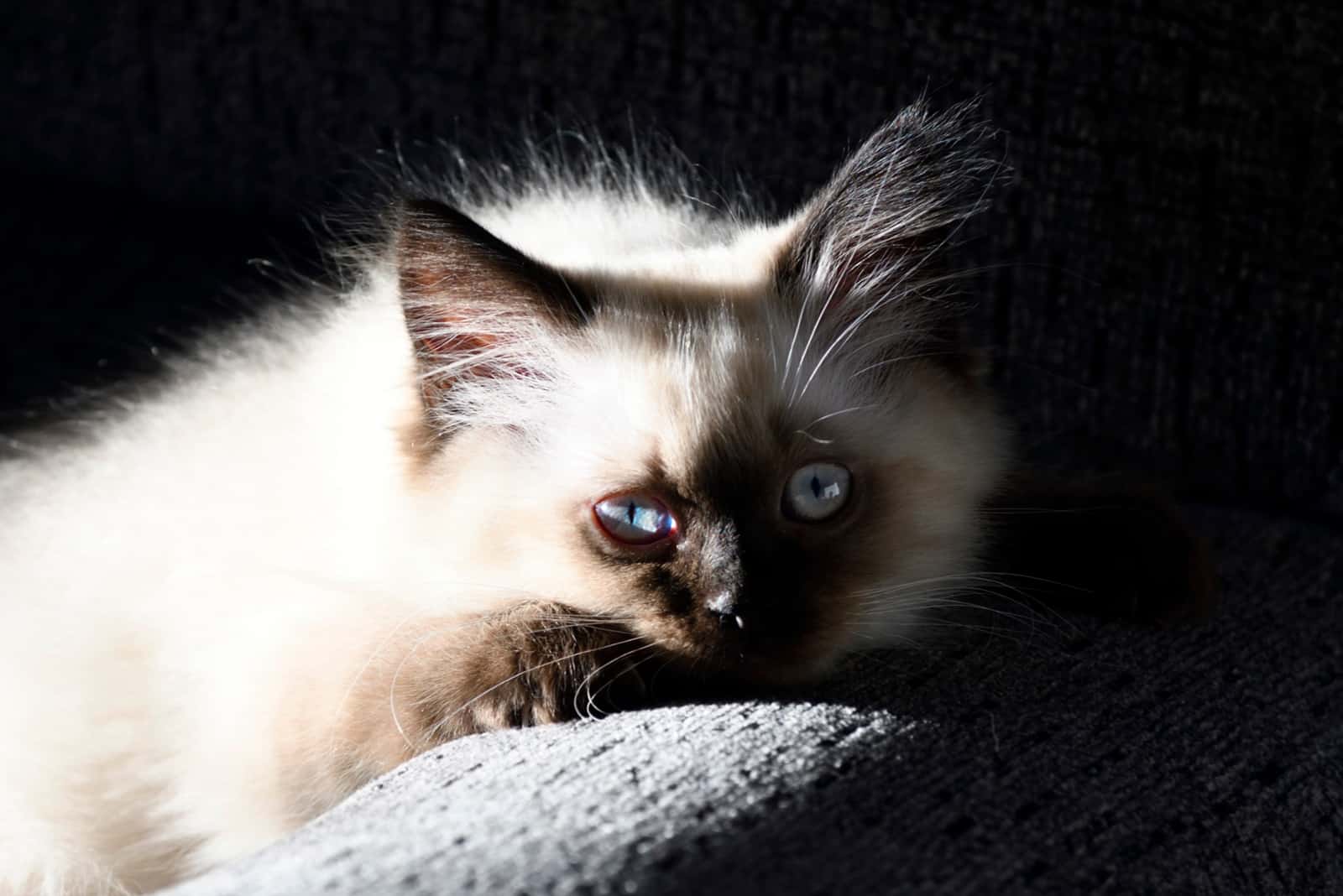 Yes, chocolate, mink, and lilac colors of the ragdoll breed are rare, unlike, for example, seal and blue ragdolls. As they are rare, it’s more likely that you’ll have difficulties finding a good breeder with his own cattery where you can get a chocolate ragdoll kitten.

In addition, remember that they’re more expensive than other cat breeds. So, if you don’t want to spend a lot of money on a cat then this might not be the breed for you!

How Much Is A Chocolate Point Ragdoll?

A chocolate point ragdoll kitten may cost anywhere between $500 to $2500. The reason for the high price is that they’re rare and often very hard to find.

What Is The Difference Between A Chocolate Point And Seal Point Ragdoll?

The main difference between these two colors is their shade. A seal point has dark brown points which are much darker than the chocolate point ragdoll, which has much warmer and lighter shades of brown, in a milk-chocolate color.

A seal point is more similar to a Siamese cat due to its dark points.

Do All Chocolate Ragdolls Have Blue Eyes?

Yes, all purebred ragdolls have blue eyes. This is one of their main characteristics. Mixed breed ragdolls may have dark blue or even green eyes.

The answer is NO. Every Ragdoll kitten, not just the chocolate variety, is born completely white. They start to develop their color after the first couple of weeks.

Yes, they can change color because their pigment production is influenced by their body temperature.

Do Chocolate Ragdolls Get Darker Coats When They’re Older?

Yes, their coats do get darker with their age. However, this also has to do with the cat’s temperature. How is this possible?

On the other hand, older cats have a slower metabolism and a lower body temperature which causes pigment production to increase, so their coats get darker, especially in the places where body temperature is lowest.

Yes, they do. It may sound funny, but it’s true – body weight can influence the color of the coat.

Overweight cats have large quantities of a particular type of tissue under the skin. This causes a lower temperature in this area.

This fatty tissue blocks body heat from reaching the skin and with a lower temperature, the fur becomes darker.

This is not permanent. When a cat loses weight, the fatty tissue disappears and temperature increases again, making the cat’s fur lighter again.

Ragdoll cats are one of the best pets because of their gentle temperament, and this wonderful variety of different colors makes them one of the most beautiful cat breeds.

There are many different colors for the ragdoll breed, and there are also various patterns. So, each different color of ragdoll cat can also have different patterns, for example, chocolate lynx, blue mitted, seal bicolor, etc.

The chocolate point ragdoll is one of the rarest colors when it comes to ragdoll cats. Their specific cream body color and milk chocolate points are very sought after and very expensive.

However, if you have difficulties finding a chocolate point ragdoll cat in your area, don’t worry because you can choose from many other beautiful colors and patterns and find the perfect ragdoll cat companion.

After all, it’s not just about the cat’s color; the most important thing is that you and your cat get along and that she’s safe and healthy – that’s the best way to happiness and a content, grateful cat!

16 Brown Cats That Will Leave You Speechless (With Pictures)

[…] cat breeds with pointed coat patterns, like the seal point Siamese cat or the chocolate point Ragdoll, are also available in […]

[…] coat is fascinating, mainly because it may appear in colors such as seal, blue, chocolate, red, cream, white, and lilac. These colors are often combined with five possible coat patterns: […]

Introducing You To The Charming Blue Bicolor Ragdoll Cat

[…] may appear in many different color and pattern combinations. These colors include: seal, blue, chocolate, cinnamon, lilac, and […]

[…] include the Siamese, Birman, Oriental shorthair, Balinese, Himalayan, Burmese and Ragdoll (the chocolate point Ragdoll is my […]

[…] See also: The Beauty Of The Chocolate Point Ragdoll Cat […]