When a cat lover decides to get a cat, the first thing they should do is to find a cat breed that suits their needs and lifestyle.

Not every cat breed is suitable for every type of person. As a responsible cat owner, you should find the most suitable breed for you in order to give your feline friend the best life possible.

If you’re someone who wants a lovely, calm, and clean cat who can’t live without its owner, then a ragdoll cat could be the perfect choice for you!

A ragdoll cat is a domestic cat that has beautiful blue eyes and long soft fur which can be mitted, bicolor, lilac, or colorpoint.

The ragdoll cat is a friendly cat who adores cuddling and playing. It’s an excellent breed of cat for a first-time owner and in addition, they’re good with children.

Although they’re so gentle and calm, there are specific ragdoll cat behavior problems that you should know about if you’re considering getting one. The best thing to do is to ask the breeder for the information about the breed.

This breed of cat is prone to a heart disease called hypertrophic cardiomyopathy, but despite that, they have an average lifespan of 15 to 18 years. So, if you decide to get yourself one, you should know what to expect from your companion for at least 15 years.

So, before you talk to the breeder or an expert, here are some main ragdoll cat behavior problems and possible solutions. Read on to learn more!

1. Ragdolls Are The Most Dependent Breed! 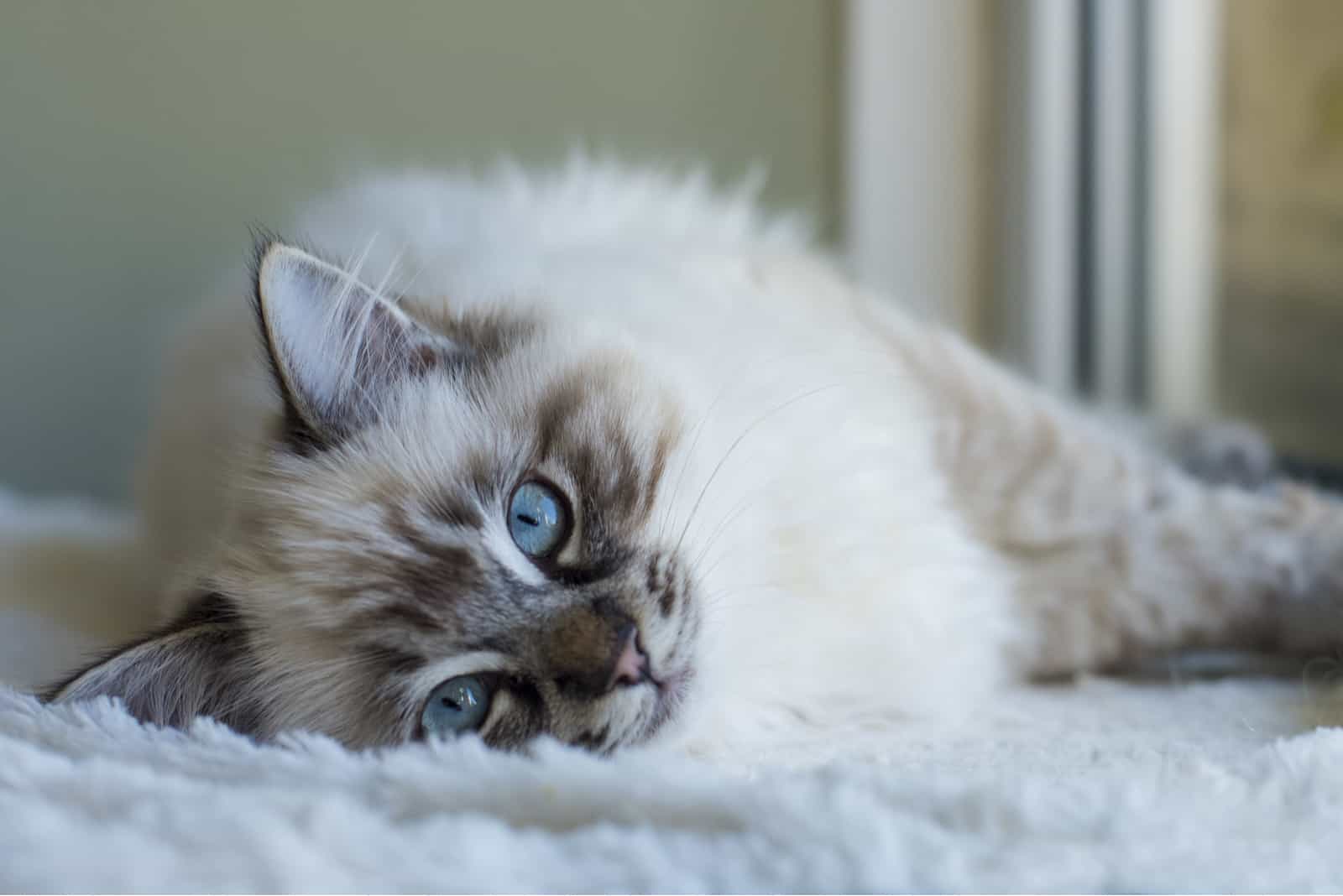 This specific breed of cats tends to be very dependent on their owners. This is because they’re bred to be indoor cats and to be a human’s best friend.

You won’t see a ragdoll cat outside, and it’s most likely that they wouldn’t survive on their own for very long. This is because they’re extremely friendly towards other humans, children, and even other pets.

If a ragdoll cat encounters another cat or dog, and it attacks her, she won’t know how to defend herself. Also, they lack the necessary hunting instinct so she wouldn’t be able to catch herself a meal.

While there is no real solution for this behavior, if you get yourself a ragdoll cat, remember this, take care of her, and don’t let her go outside!

Usually, cats don’t like to be carried around or bothered too much. However,ragdolls adore being carried and hugged all the time. This is also one of the reasons why they’re so good with children.

Some cats hate being bothered or carried by children, but in this case, children will enjoy carrying the ragdoll around and the ragdoll will enjoy it even more!

Ragdoll cats quickly become attached to their owners and they love lots of affection and attention. Usually, your ragdoll will follow you everywhere and she’ll probably even want to sleep in the same bed as you.

This is all really sweet, but you shouldn’t overdo it. If you spoil her, she may become jealous when she sees you holding a baby or another pet, especially if she thinks you are neglecting her or didn’t pay attention to her.

The solution to this problem may be that you don’t carry your ragdoll cat all the time, and close the bedroom door if you don’t want her to sleep with you. Eventually, she’ll learn that this is just how things are and she will accept it. 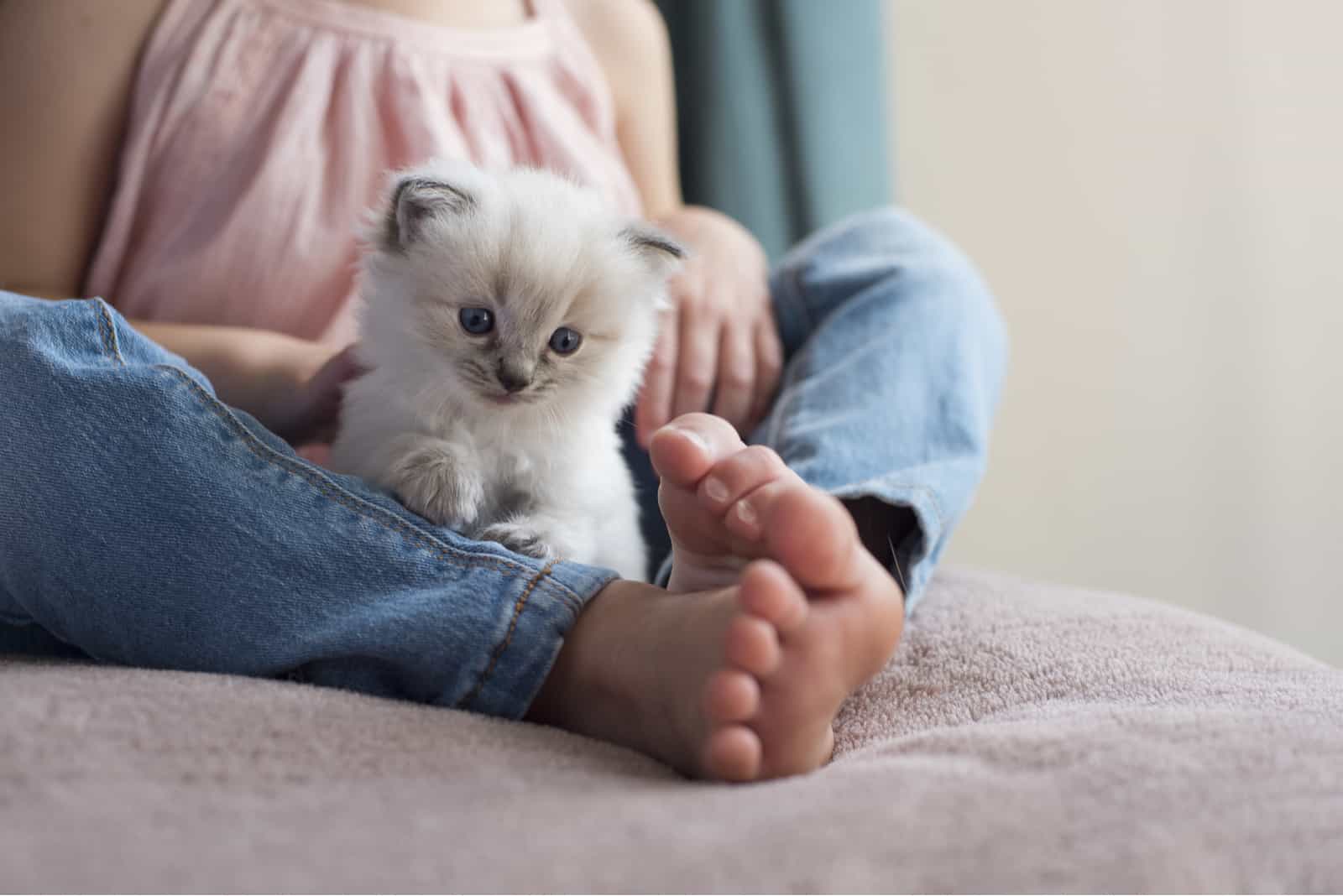 Just like most cats, ragdoll cats are calm and sleepy during the day, and more active during the night. So, for example, they may sleep when you’re at work, and then when you’re sleeping they want to play.

It’s very possible that your ragdoll will try to wake you up early in the morning, wanting you to pay attention to her or feed her.

So, don’t think you’ll get to enjoy your morning sleep, because your ragdoll will probably try to catch your elbow or feet or just bother you until you wake up.

To solve this ragdoll cat behavior problem, you can change her breakfast time and provide her with plenty of toys to occupy her and keep her busy. If that doesn’t succeed, the only solution left is to ban your cat from your bedroom, she’ll survive, don’t worry!

Knowing that ragdolls are very dependent cats, you won’t be surprised to learn that they will meow loudly when they need something, for example, a clean litter box, food, attention, etc. If you don’t react to your cat crying it can lead to other problems, such as scratching furniture.

This is the main problem when it comes to ragdoll cats, and there’s no real solution for it. Putting scratching posts around the house may be very helpful, but still, you should pay attention to your cat and everything she’s trying to say! 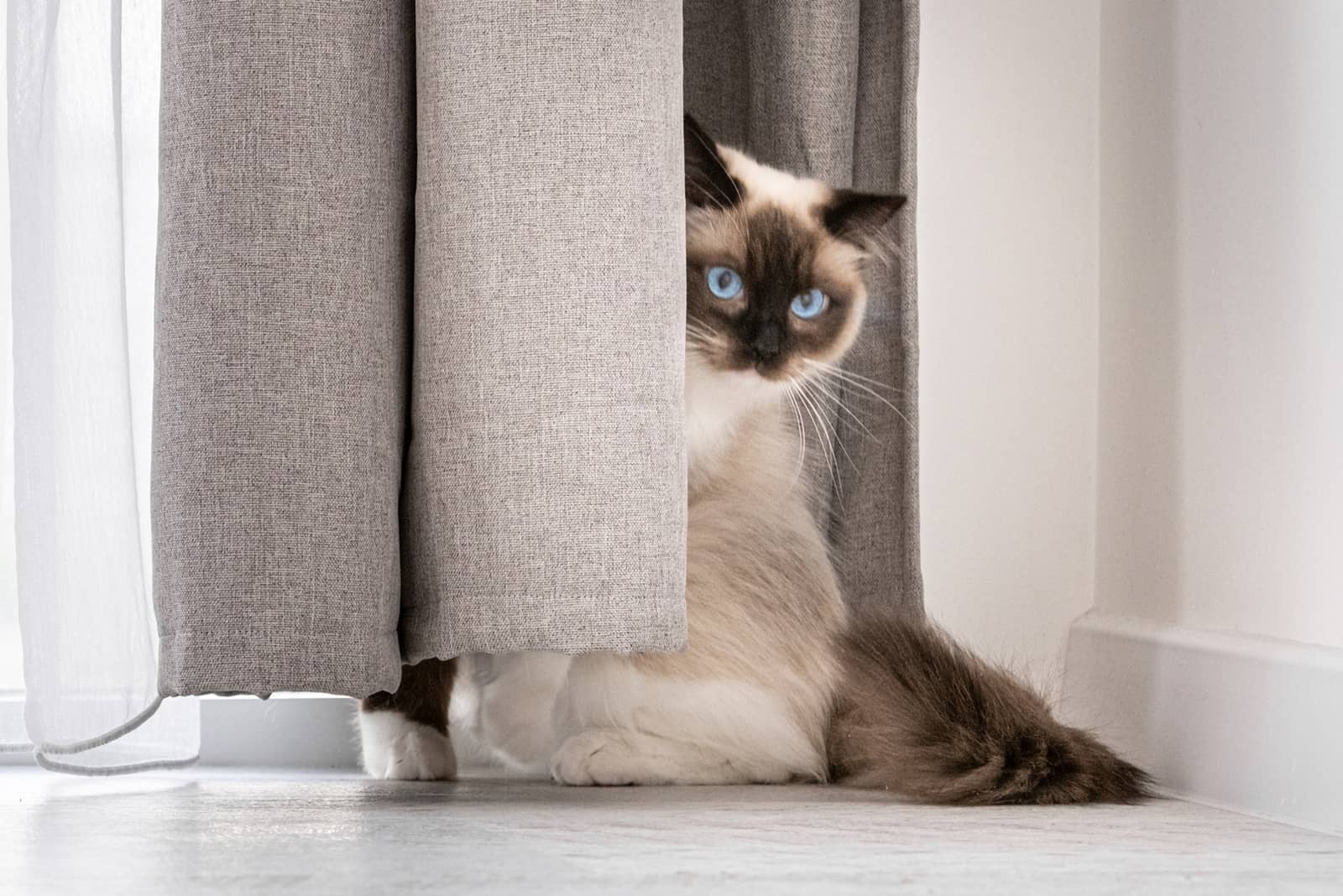 Play aggression is one of the ragdoll cat behavior problems which is hardest to handle. Sometimes they become so excited when you play with them and this may turn into aggression.

If your ragdoll scratches and bites you during playtime, that is not good! The main solution to this problem is socialization. If you get a ragdoll kitten, train it and socialize it from the beginning in order to avoid these problems.

If you have an adult raggie, make sure you trim her nails often in order to avoid injuries while playing!

6. Ragdolls Are Too Picky

Ragdolls are extremely picky when it comes to food and toys.

If they don’t like the food, they’re just going to leave it and NO, they won’t eat it later!

So, before you spend a lot of money on cat food, make sure you talk to the vet or another expert for an opinion about ragdoll feeding. They will probably give you the best advice, because some food may influence their health problems.

The same thing goes for toys. If your ragdoll doesn’t like a toy she’ll leave it, and she won’t play with it! So, before spending a fortune on different toys, search for toys designed to ragdoll cats or simply ask other ragdoll owners what the best toys are for these picky cats! 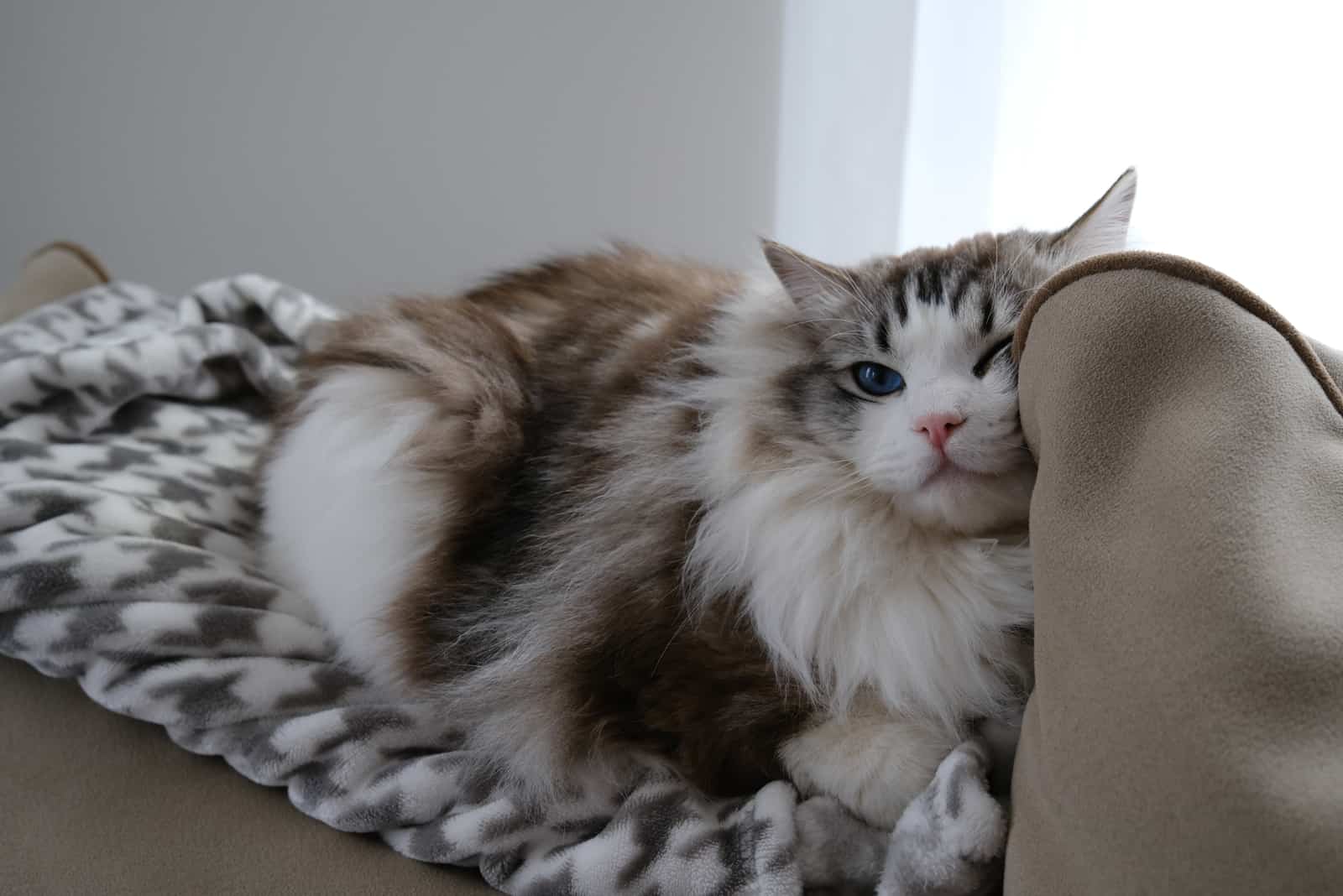 Why is it always the furniture’s fault?!

We have already learned that these cats crave attention, and if they don’t get it, you can say goodbye to your pristine furniture.

If you don’t pay attention to them, these cats may get frustrated or bored and scratch the furniture.

Another reason for scratching the furniture may be because you haven’t trimmed your cat’s nails, so she’s finding her own way to solve the problem.

Again, the solution is to socialize and train your cat as well as taking care of her regularly and giving plenty of attention and activities.

You should also put scratch posts around your house, as well as cat trees, but make sure that the cat trees are not too high because ragdolls like to stay on the ground.

8. Ragdolls Are The Cleanest Cats

The ragdoll cat breed is known for cleaning and licking themselves constantly. That is good for staying clean, but it can also lead to the common health issue known as hairballs.

Ragdoll cats are long-haired cats and by licking, they swallow fur which is not digestible. This leads to the development of hairballs which your cat eventually vomits.

So, if you want to prevent hairballs and loose hair, make sure you groom your ragdoll twice a week with a wide-toothed comb! 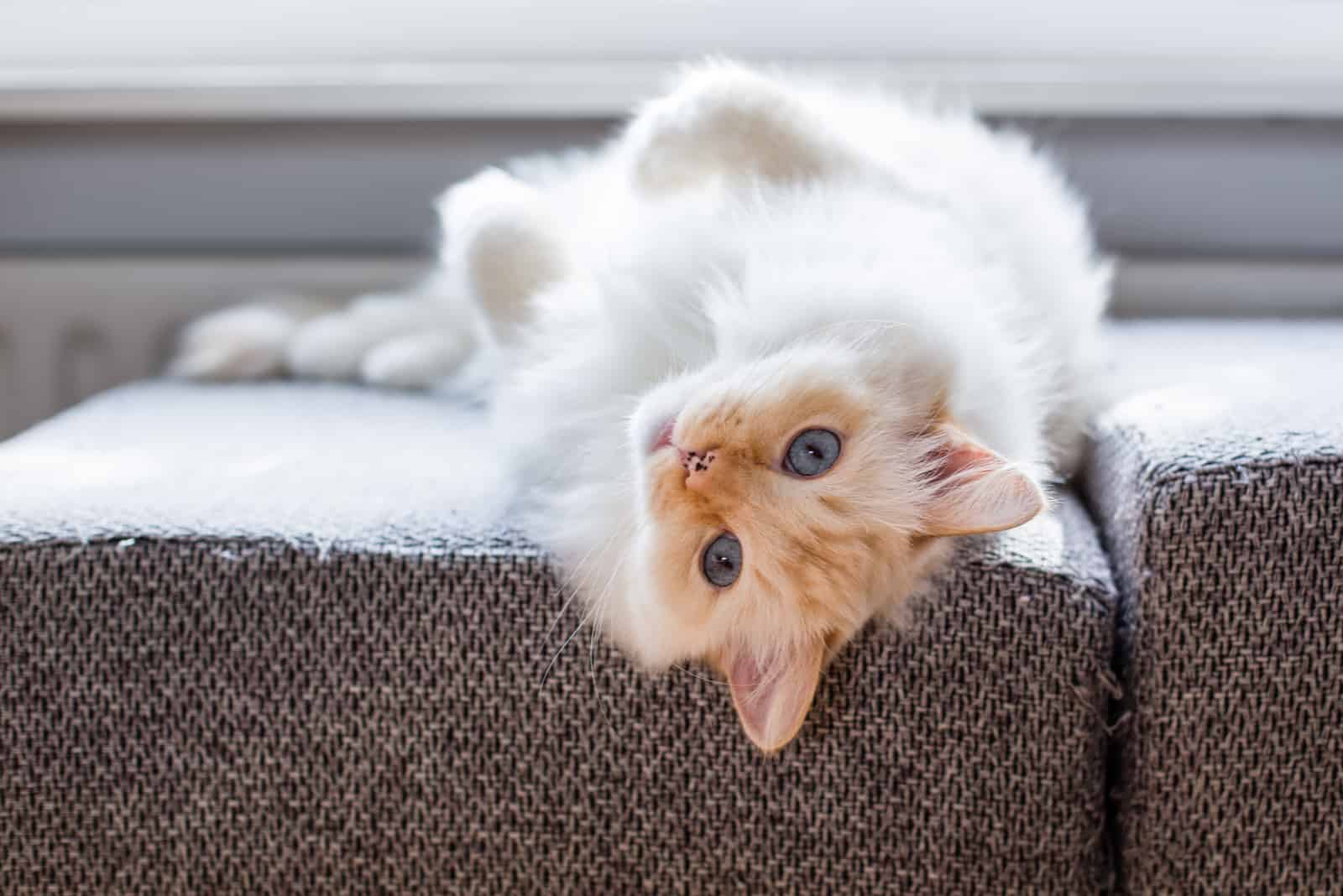 This is one of the most distinctive ragdoll cat behavior problems. Ragdoll cats like to sleep in a strange position with their legs spread out.

However, many ragdoll owners have tried to change their cat’s sleeping position, only to find that their cat simply replaces it with another weird posture.

As mentioned previously, ragdoll cats are very dependent cats and they have a docile temperament. So, it’s likely that your ragdoll will follow you around everywhere.

If you don’t have lots of time to be your cat’s companion, then you should provide her with plenty of interesting toys or just get another pet to keep her company while you’re gone. 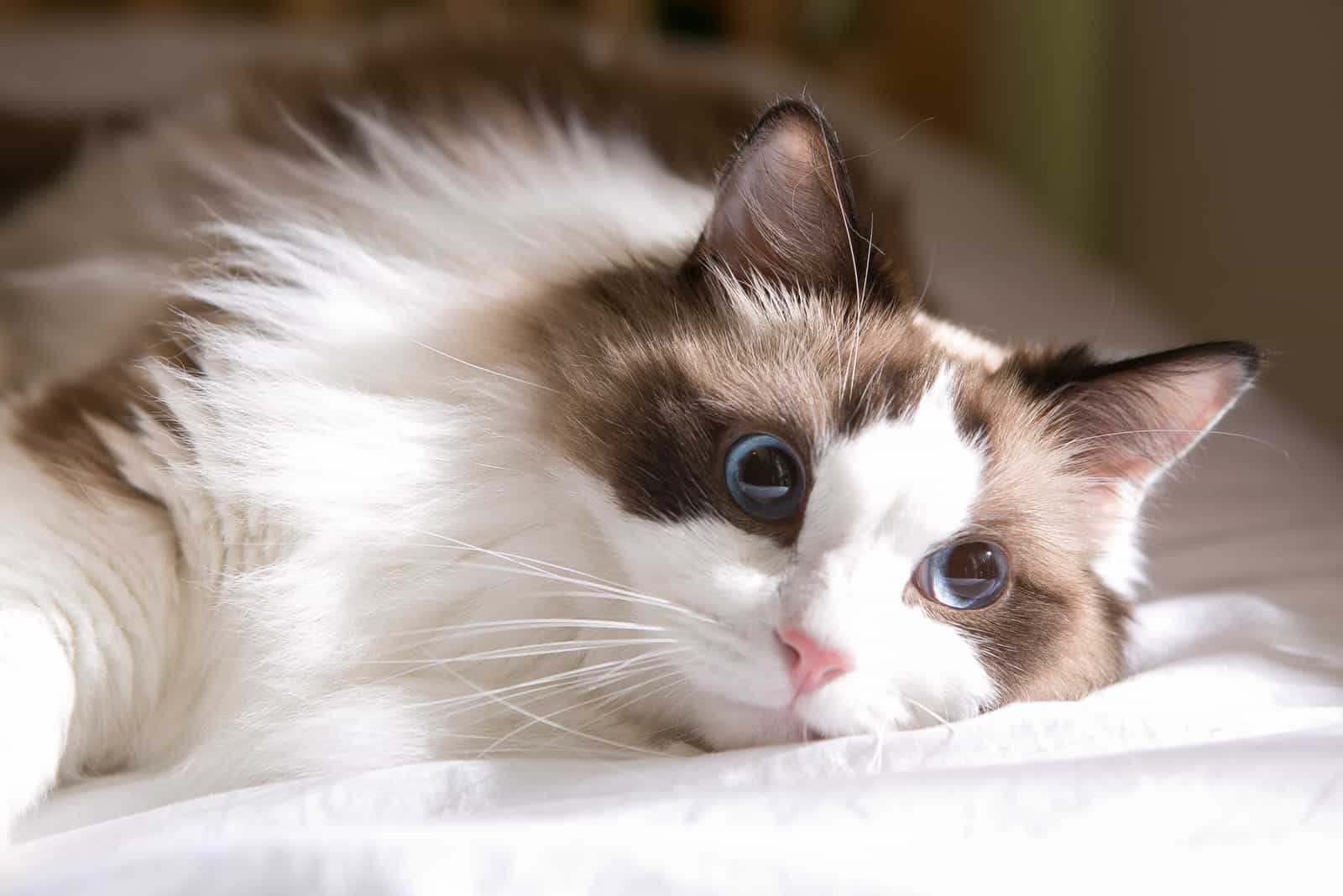 Is It Possible That A Ragdoll Cat Is Stressed?

Yes, your raggie can become stressed and this may be the reason for bad behavior such as biting, scratching, or even defecating outside the litter box.

If you notice this unwanted behavior, you need to react by spending more time with your cat, as they’re probably stressed because they crave your attention.

Can Ragdolls Be Aggressive?

Usually, Ragdolls are calm and gentle cats. However, sometimes they may get aggressive because they’re not spayed or neutered.

They may also show signs of aggressiveness when they’re stressed or ill.

Raggies usually have a docile temperament, so it’s important to find the cause of any aggressive behavior because this is very unusual for the breed.

Why Does My Ragdoll Cat Bite Me?

Raggies don’t usually bite, BUT there’s always an exception. They may bite when they’re frightened, depressed, or irritated. 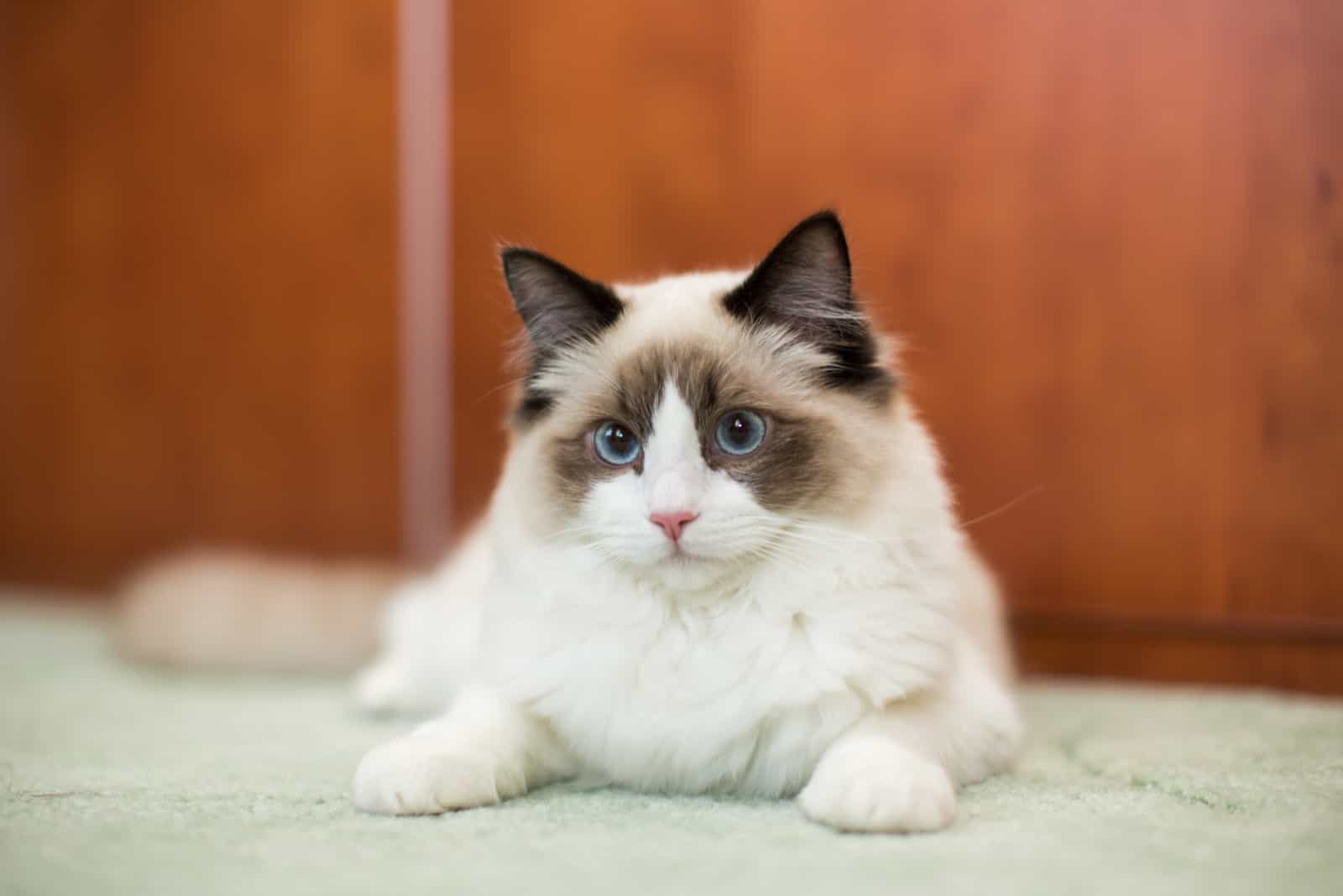 This beautiful breed was created and developed by Ann Baker in California in the 1960s. Her goal was to produce a lovely, friendly, and calm cat, and she succeeded.

Although they’re very gentle, they may have some particular behavior problems which can be prevented by early training and socialization.

If you didn’t get your raggie from a certified breeder, there’s also a possibility that it is not a purebred cat and that some behavior problems may derive from other breeds.

Apart from their behavior problems, they may suffer from obesity and kidney disease. Sometimes ragdoll cat behavior problems may be influenced by illness, so, you need to learn to recognize when your cat’s trying to tell you that there is something wrong. Remember, every good pet owner wants the best for their pet!

6 Things That Make The Ragdoll Blue Lynx So Special

[…] So, if you get a Ragdoll cat as your furry friend, I’m sure you won’t regret it, and the cat won’t complain about it either, as they’re very calm and quiet. Just make sure you train them properly at a young age in order to avoid certain behavior problems in Ragdoll cats. […]

[…] they’re very calm cats, they may have some behavioral issues, so it’s very important to start socializing and training your kitten from the […]

[…] you don’t train and socialize them on time, ragdolls may have behavior issues. However, with appropriate training, these cats can be desirable family pets, especially if you […]

The 5 Best Ragdoll Breeders In Michigan

[…] However, even though they’re extremely calm, they require proper socialization and training from a young age if you want to avoid certain behavior issues. […]