If you’re a cat parent, you may have noticed how your cat reacts to certain sounds, musical instruments, and other noises. Have you ever wondered why they react; is it because of pleasure, or because they’re scared, or something else?

Our question for today is do cats like music?

Believe it or not, cats do like music, and they may really enjoy it. However, they’re not fans of every type of music and there are many reasons for this, which we will discover later on in the article.

If you want to learn what type of music you can enjoy listening to with your furry friend, then read on!

Contents show
1 Do Cats Like Music?
2 All You Need To Know About Cat’s Hearing Range?
3 Why Is Music Good For Cats?
4 Good Music For Cats
4.1 Soft Classical Music
4.2 Music Composed For Cats
4.2.1 Sounds Present In Cat Music
5 Music That You Should Avoid Playing To Your Cats
6 Final Thoughts
6.1 Related Content 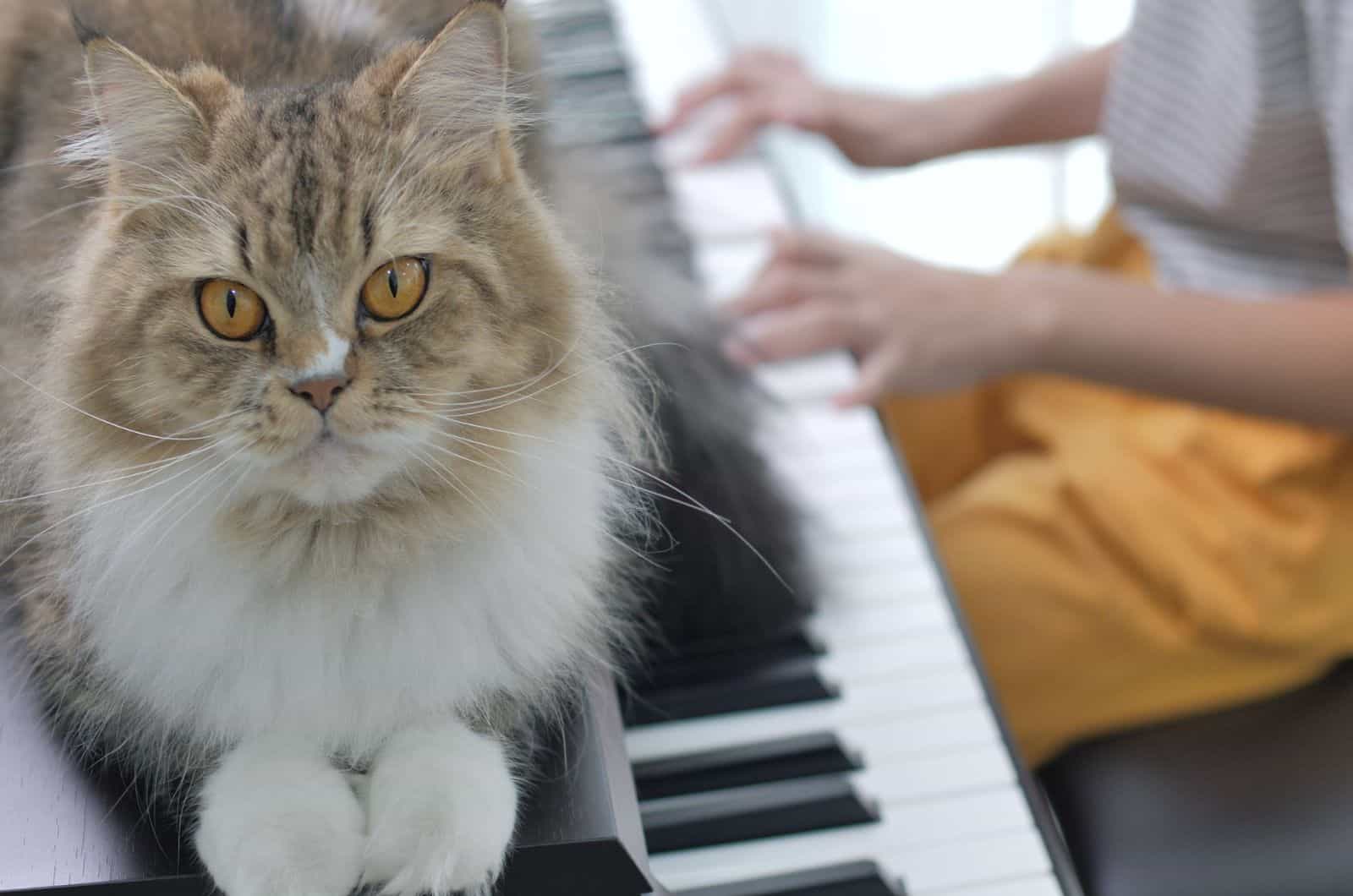 Cats can enjoy listening to music. According to research, cats prefer species-appropriate music with a specific frequency range and rhythm.

In order to test this, scientists, along with a music professor, succeeded in creating music for cats! The result was incredible. While listening to this music, most cats behaved positively by rubbing against the speaker, purring, meowing, and turning themselves toward the speaker to listen to the music.

However, that wasn’t exactly the case with human music; which means that cats react differently to different types of music. The researchers used two human songs: Bach’s “Air on a G String” and Faure’s “Elegie”. The result was unexpected; the cats didn’t react to these songs written for humans at all.

Another interesting thing was also discovered; the most interested cats were younger and older cats, while the middle-aged cats were less impressed.

This is only the beginning. Obviously there are certain reasons why cats enjoy only some types of music, and if you wish to learn more, just stay with me to find out!

All You Need To Know About Cat’s Hearing Range?

The main reason why cats don’t like human music, or at least not every type of music, is because they have different hearing ranges than humans do.

Therefore, certain sounds that we may find interesting, won’t necessarily be interesting for cats because they may hear it differently than you do.

As a result of their hearing range, a cat’s hearing is very sensitive, but they can still hear low and high frequencies as well as high-pitched sounds.

Furthermore, they have cone-shaped ears that contain as many as 32 muscles which have the ability to amplify sound waves by two or three frequencies and this helps them to locate the sources of the sounds they hear. That is why cats have a better hearing range than humans; we have only 6 muscles in our outer ears.

That may lead to different reactions. So, certain human music may even cause stress and result in behavior issues in cats, even though it may sound like a nice song to us.

Therefore, if you decide to relax with your feline friend while listening to music, be careful what type of music you’re choosing. Read on to find out which type of music sounds good to cats and which doesn’t.

Why Is Music Good For Cats? 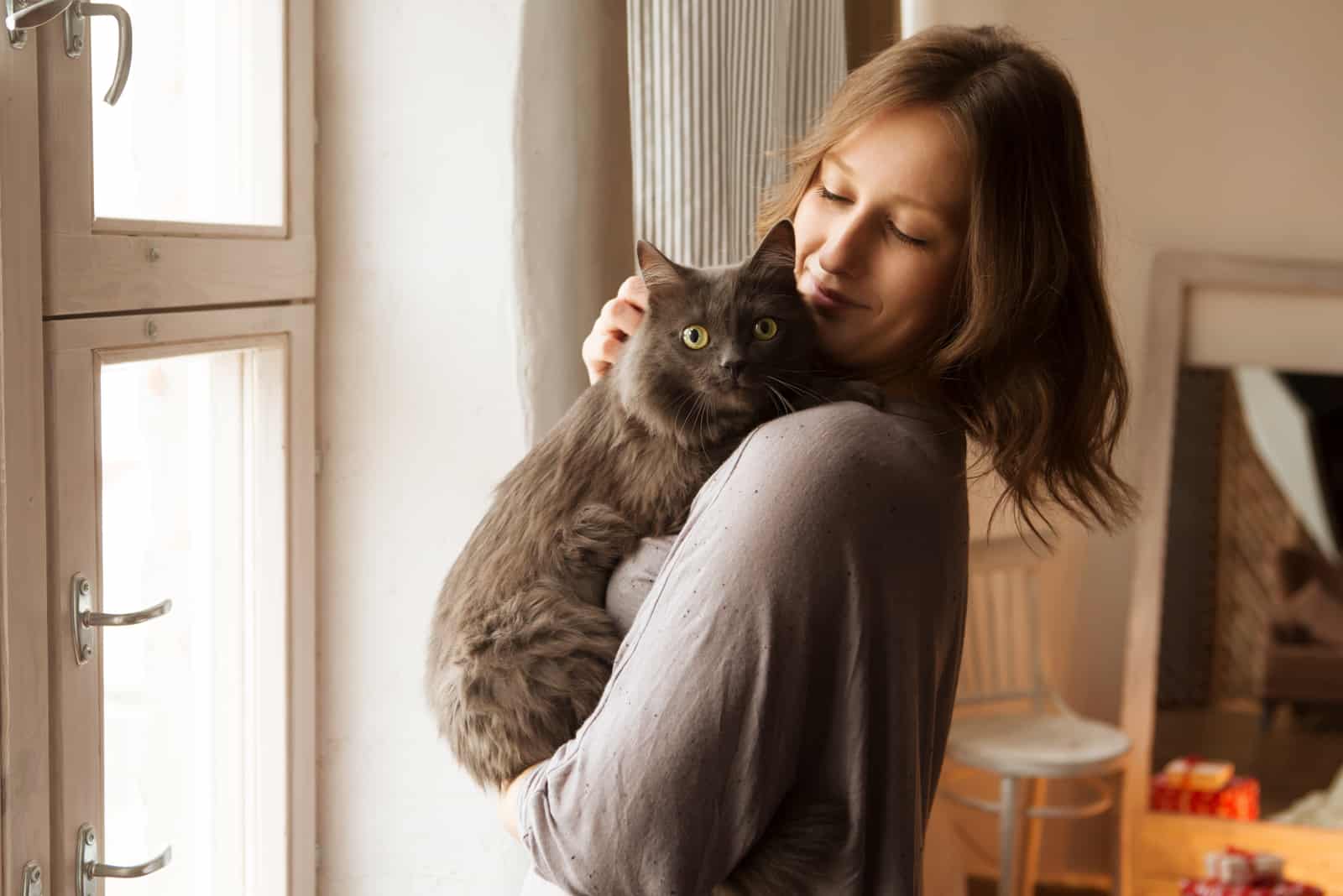 According to Applied Animal Behavior Science, the music that cats enjoy the most is species-specific music. It can even be a good type of therapy for them too.

Cat phenomenon music research came to the conclusion that cat-specific music can positively affect the cat and its behavior. It can significantly lower the stress in cats, meaning that it has a calming and soothing effect.

So, the right type of music can reduce stress and anxiety in cats and impact their behavior positively. When they hear the sounds that they like, they’ll become calm and start to purr and rub against the speaker or nearby objects, leaving their scent as a sign that they enjoy it.

Not every type of music will have a calming effect on your cat, so it’s very important to choose the right music for your feline friend. Read on to discover some good music for cats.

You should be very careful when choosing the right music for your furbaby if you want to avoid unwanted animal behaviour.

As previously mentioned, cats don’t like the same music as humans do, because they perceive it differently. Cats have different acoustic, vocal, and heartbeat ranges as well.

Psychologists Megan Savage and Charles Snowdon, at the University of Wisconsin, wanted to know how it works, and what types of music cats actually like.

Later on, they decided to compose music that attempts to mimic the communication between cats, that is, the sounds that aren’t present in human speech.

So, the drum beat in human music was replaced with a purring tempo for the cat music, along with other changes to entice cat listeners.

Finally, they played these songs for over 47 cats, while monitoring their behavior. Eventually, they realized that this music – composed specially for cats – impacted positively on them, unlike standard human music.

According to this research, some of the best classical music for cats include “La Mer” by Claude Debussy, and “Goldberg-Variations” by Johann Sebastian Bach, as well as compositions by other famous composers such as Mozart.

Moreover, some research shows that music can even help regulate blood pressure and cardiovascular function.

Species-specific music is believed to have a calming effect on our furry friends and this can impact their behavior positively.

If you want to avoid negative behavior in your cats, avoid human music and choose music composed specifically for cats, and your cat will not be the only one enjoying the music; you should also be satisfied with a calm cat.

As this music is very relaxing for cats and reduces stress, that may be the main reason why this type of music is often played in adoption and rescue centers, to keep their fur babies calm.

One of the most popular composers of cat music is an accomplished cellist called David Teie, who shares his passion for both cats and music.

He has now composed many cat songs. He has his own playlist that could be ideal for you and your feline friend. If you cannot decide which one to play, try playing the track called “The Cozmo’s Air”, which is one of the most popular ones.

There may be many different sounds found in cat music which may sound unnatural to humans. However, just as human music has sounds that create a certain mood, that’s exactly what cat music offers to felines.

Some cat songs have chirping birds and similar sounds that will boost your cat’s energy and stimulate her excitement. Other music will soothe or calm your cat; soothing tones usually have a purring rhythm, or the sound of a suckling kitten.

Music That You Should Avoid Playing To Your Cats 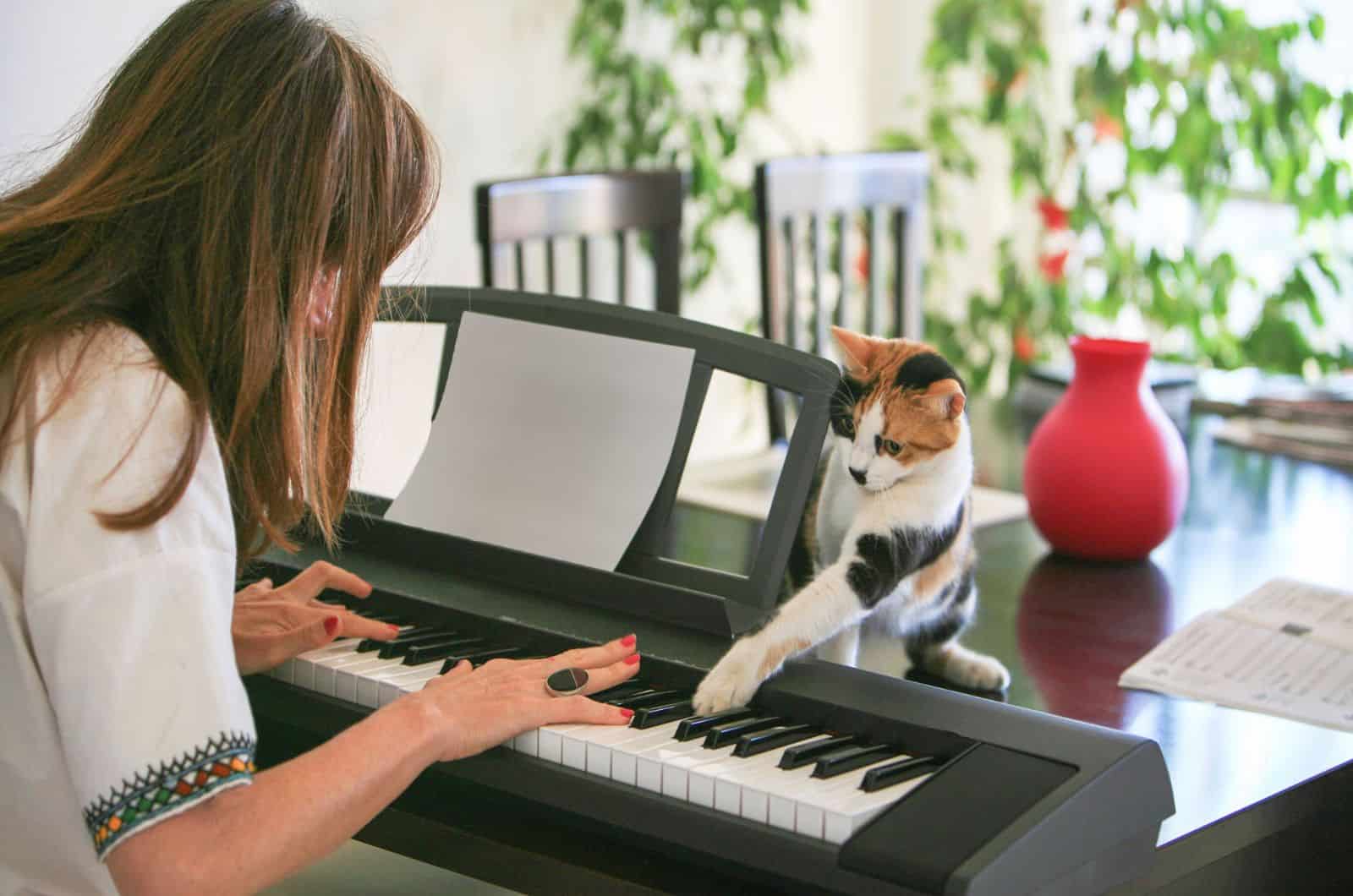 If you want to avoid certain unwanted behaviors in your cat, then you should avoid the kind of music that I’m about to mention. Heavy metal, or any kind of music with heavy bass, should be avoided because it can cause major stress and anxiety in your cat.

This usually happens because cats are able to feel the heavy vibrations through their whiskers and their ears, and therefore they get confused by the mixture of high and low frequencies.

Your feline friend may really get scared hearing this type of music, and you may notice signs of this fear in her behavior and body language such as folded ears, dilated pupils, a high heart rate, hiding, etc.

As previously mentioned, cats prefer gentle, slower music with soothing tones that will make them feel happy, comfortable, and calm, just as they should be.

So, if you wondered do cats like music, now you know that the answer is yes. However, it is a little bit complicated. Cats don’t like all types of music, especially human music, because they have a different hearing range to humans, so they may not hear certain music the same way we do.

So, while cats like music, the music that cats like most is a species-appropriate music which is made of sounds and frequencies that are pleasant to the cats. The best thing about cat-composed music is that its vibrations remind them of purring and their own communication.

Besides cats enjoying the music, it’s actually very helpful for them as it has a calming effect. This can be seen through their behavior, such as rubbing, meowing, purring, and similar.

The best music for felines is soft classical music, or music composed specifically for cats. It is best to avoid music such as heavy metal or heavy bass because it can negatively impact the cat’s behavior, leading them to be scared or causing them stress and similar which can lead to unwanted behavior.

So, if you wish to relax with your feline, there is plenty of special music composed for cats that you can choose for your feline and hopefully enjoy together!

• Do Cats Forget Their Owners? Here’s The Answer!

• What’s A Cat’s Favorite Color? Do Cats Even See Colors?

• Why Do Cats Carry Toys And Meow? All You Need To Know!

Can Cats Swim Or Is The Myth About Cats And Water True?