Cats are fine without a light at night. They have extremely good vision which enables them to see things and move around the area as long as there aresmall traces of light.

So, if you’re a pet parent who’s searching for the answer to the question do cats need light at night, read on to find out everything about your cat’s vision, and what you can do for your cat during the night!

Do Cats Need Light At Night? 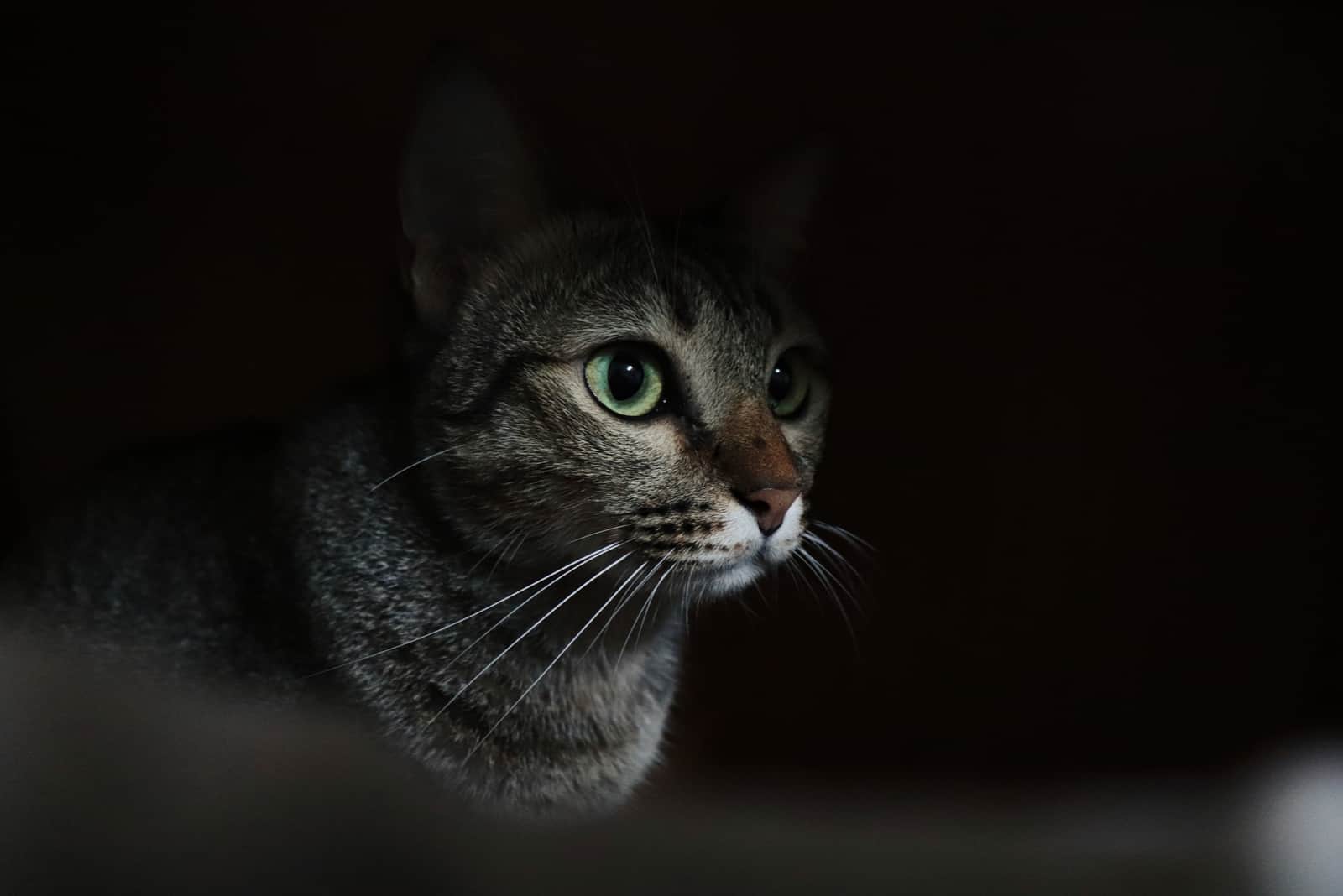 Once more, cats can see well in darkness, but even small traces of light help them to see perfectly in the dark.

Cats are known to be semi-nocturnal creatures with the ability to see and move safely in the dark. However, they do need some light in order to see perfectly in the dark, but not nearly as humans do. This is because cat’s eyes are very sensitive and very adaptable during the night.

Cat’s vision is very interesting. Cats can see perfectly in low light situations; they can avoid obstacles and even hunt prey. They’re very sensitive to movements and have a broad field of vision, which makes them incredible hunters.

The most amazing part of their vision is their pupils. Usually, during the day a cat’s pupils are narrowed tightly, reducing bright light.

However, during the night, their pupils widen in order to receive the most light.

In addition, a cat’s eyes have a special layer behind the retina which is called the tapetum. That tapetum is reflective, which allows the cat to maximize the amount of light she receives.

Incredibly, cats are able to see in the dark using only one sixth of the light that humans need in order to see clearly. Amazing, right?!

Can Cats See Completely In The Dark?

Cats are known for their excellent night vision, but they have difficulties seeing in total darkness.

So, it’s okay if you turn the light off during the night, but make sure that there’s some residual light from outside which will help your cat move around safely. If there’s no light from the outside you can always provide your cat with a small nightlight, but nothing too bright.

Sometimes your cat has enough light to see in the dark, which she receives from home devices or street lights,so don’t worry too much about it. Besides the cat’s vision, cats also have other important sensors like their scent and whiskers.

With their whiskers, they easily adapt to sensing the environment, noticing every object around them, and with their brilliant sense of smell, they’ll be able to easily find food or water or even the litter box in the dark.

However, it’s unlikely that your cat is tripping over objects around the house. So, if you notice that, most likely it’s due to a medical condition and you should contact your veterinarian as soon as possible.

Can Kittens See In The Dark?

It’s important to know that kittens are born blind, and they open their eyes after nine to fourteen days. After that, they start seeing clearly, but still, they can’t see in complete darkness. Just like adult cats, kittens also need a small amount of light in order to see perfectly in the dark.

Dark Vs. Light – Which One Does A Cat Prefer? 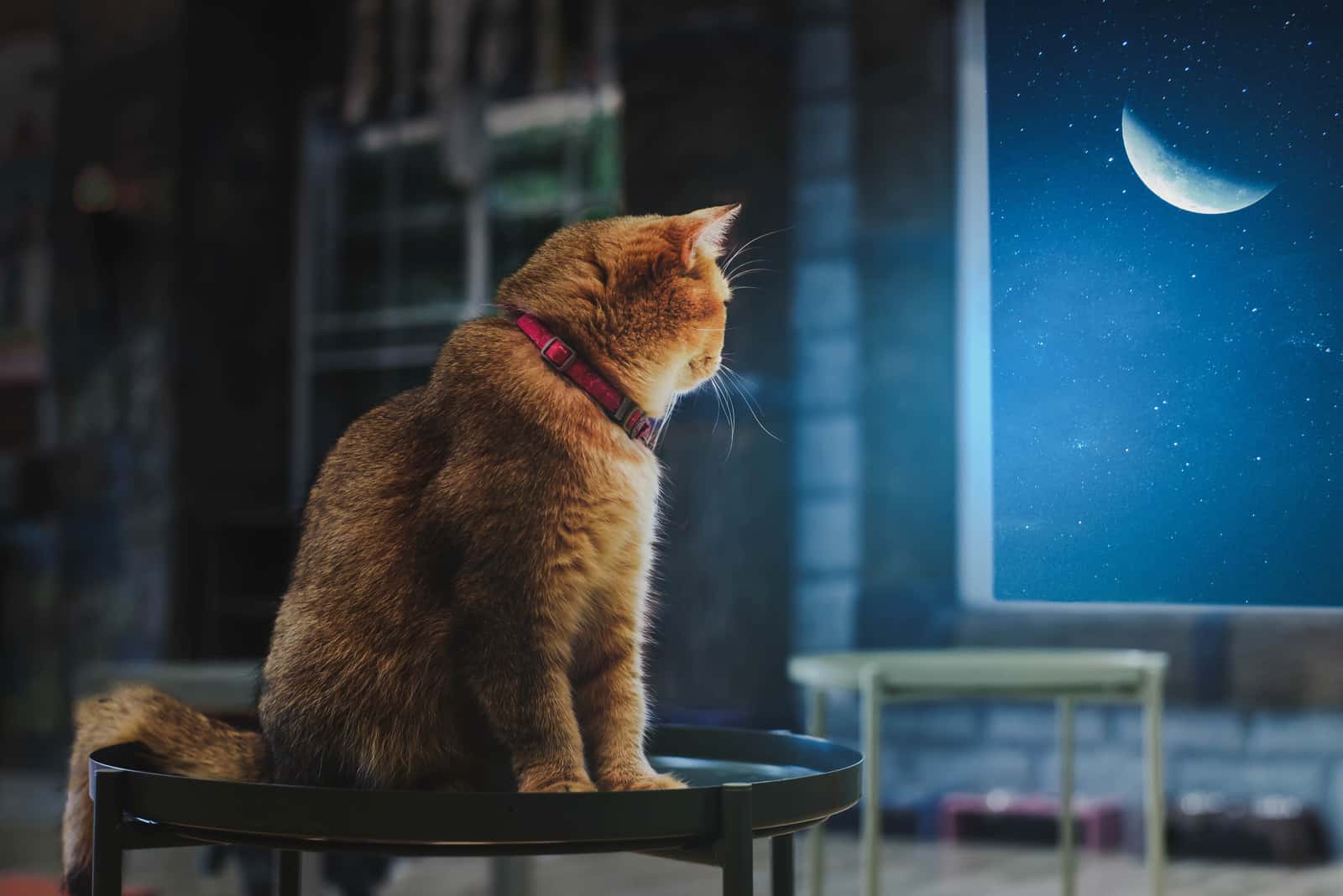 Both humans and cats have a pineal gland which is responsible for melatonin. That is the main reason we become sleepy at night.

Try to avoid leaving a light on after dark, because cats like sleeping in the dark, just as everyone else does. If you want a light on, it’s better to leave a small night light just in case you don’t step on your cat or hurt her.

The best thing to do is to stick to the routine! For example, turn the lights out at the same time every night so that your cat knows that it’s sleep time.

Don’t worry, if your cat doesn’t like something or if she’s afraid in the dark, she’ll definitely let you know that, probably by crying like a baby.

Can Cats Be Afraid Of The Darkness?

Cats can’t see in the pitch-black darkness unless there is enough light for them to see, but usually, most cats aren’t even afraid of the dark.

However, it is possible for cats to be afraid of darkness, especially young kittens and younger cats that are used to your attention or those who don’t like to be left alone. They can also be afraid if they have had previous bad experiences, such as being captured in the dark or even beaten.

So, if you notice that your cat is meowing at night, it may be because she’s afraid. The solution is to keep a night light on which may help her calm down or adapt to the new environment. This is especially important if you have moved house or if there’s a new cat in your home.

Why Should You Provide Your Cat With A Night Light?

If you have ever wondered do cats need light at night, here are a few reasons why you should provide a source of light for your cat:

• Usually, older cats get stressed easily, so, in order to calm them down, you should leave a night light on, so that she can feel safe.

• With enough light, you’ll avoid different accidents in the middle of the night, such as stepping on your cat. You both have benefits from this – your cat won’t be hurt and you won’t feel the guilt!

• If you got a new kitten who feels stressed and nervous in the new surroundings, you should leave a light on in order to help him adapt in the new home.

Why Do Cats Have Good Vision? 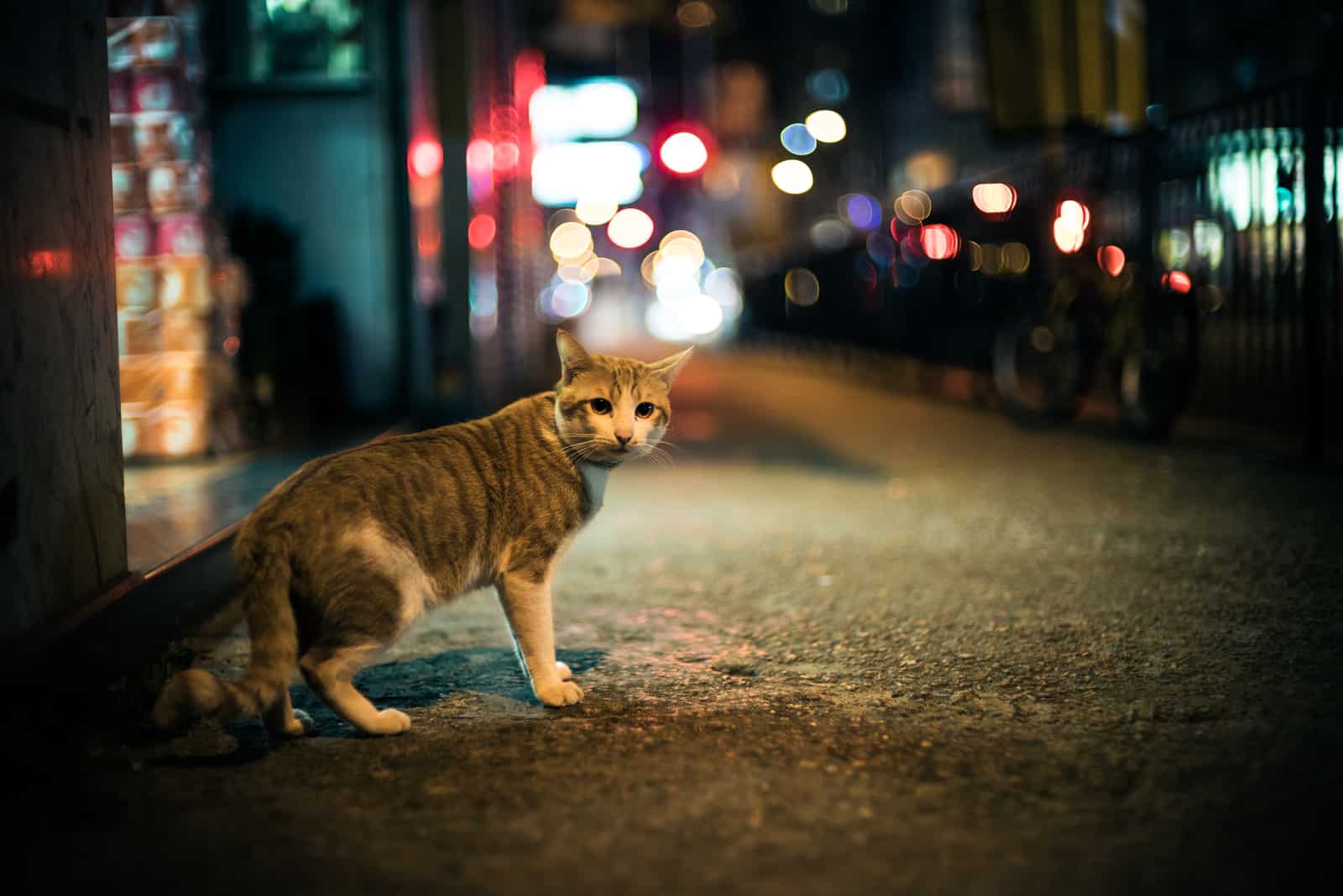 Cats can see well in dim light because they’re basically built for that, so let’s see how!

Cats Have A High Rod Count!

The retinas consist of two major cell types for light sensitivity and they are cones and rods. Here, the most important are the rods. They play the main role in night vision as they are the ones that reflect light.

Both humans and cats have rods, but the biggest difference is in the number of rods. Having more rods makes cats see better in the dark than humans!

Cats have really big eyes that are disproportionate to their head and that’s another advantage for good vision.

Their flexible irises are also very important, especially when it comes to dim light, because they can take in as much light as they need! 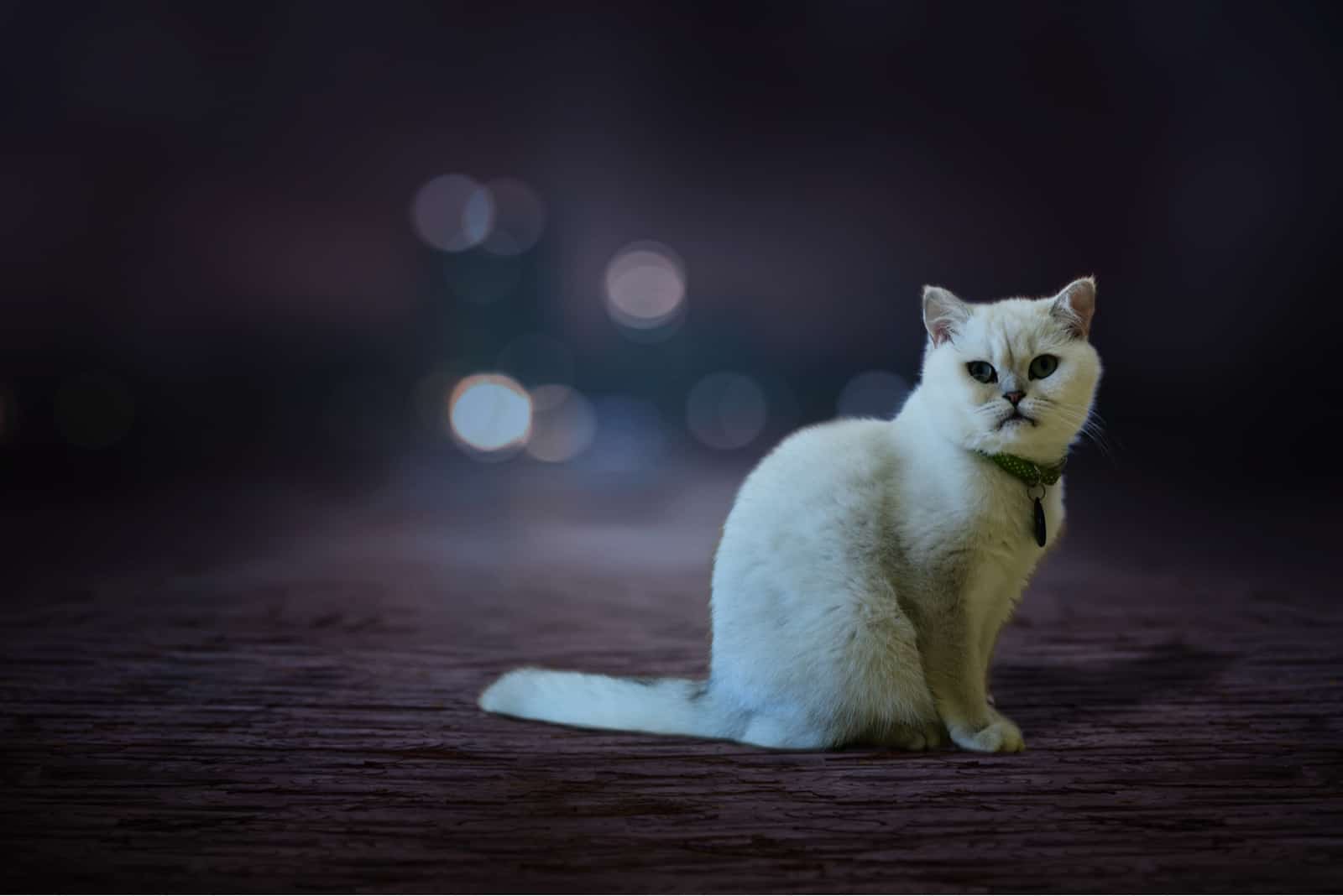 Many people believe that cats are nocturnal animals. However, that’s not correct. Cats are crepuscular animals which means that their activity time occurs at dusk and dawn.

So, sometimes it may be annoying when your cat is trying to wake you up or when she’s meowing for your attention. That’s why it’s very important to provide your cat with cat toys and scratching posts to keep her busy during the day, so that she will sleep calmly during the night.

It’s not by accident that they’re active at that particular time. Cats’ active time revolves around the activity of their prey. Their hunting instinct tells them that this is the perfect time for a successful hunt.

Is It OK To Leave A Cat In The Dark?

Yes, it’s okay to leave your feline friend in the dark, but only if there’s some dim light. It’s very important that you and your cat have a routine that will let her know that it’s alright to stay alone in the dark.

There are times when you shouldn’t leave your cat in the dark, for example if it’s a kitten that’s adapting to the new surroundings, if your cat is afraid of the dark, or if you have an elderly cat that’s not as capable as she was before.

Why Does My Cat Cry In The Dark?

Your cat may cry in the dark because she’s bored or because she feels lonely or wants to cuddle. She may be hungry, or perhaps she’s just afraid of the dark.

Make sure that playtime occurs during the day, so that your cat won’t feel bored during the night. Also, make sure you feed her every day at the same time.

What Should I Do If My Cat Is Afraid Of The Dark?

If your cat is afraid of the dark, you can leave the night light on while she’s sleeping. If that’s not helpful, you can try putting your cat’s bed in your bedroom so that she will feel safer. The final solution would be to let your cat sleep beside you, which would calm her. Whatever suits you best!

You should teach your cat from a young age that the dark is okay, but usually, cats are not that afraid as they’re predators in nature.

Why Should I Leave A Light On For My Kitten? 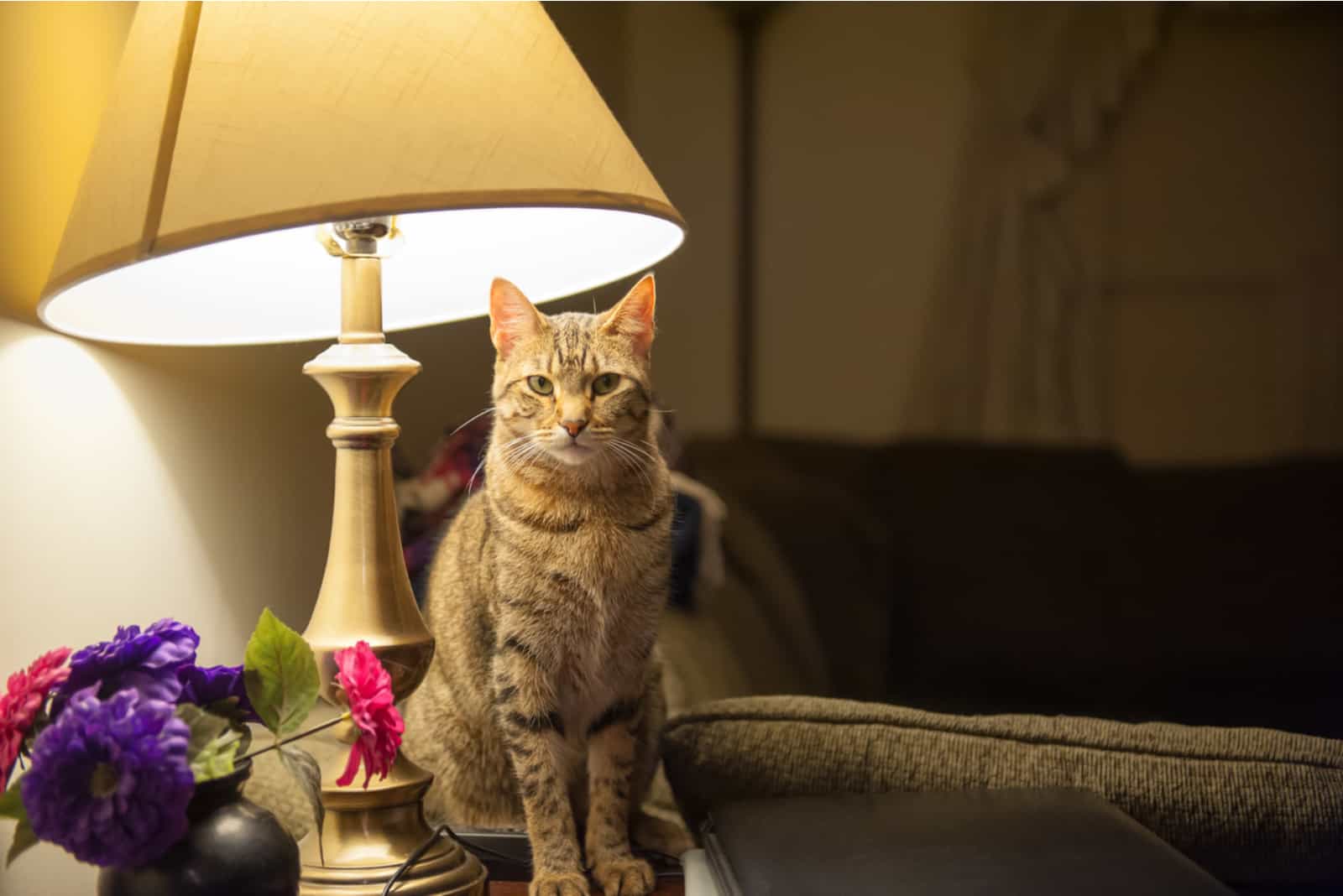 You can leave a night light on if your kitten is just getting used to its new home. On the contrary, there’s no need for light because cats have excellent night vision and they won’t have problems finding the things they need.

What Is The Best Type Of Light For A Cat?

LED lights are perfect for cats. They emit less heat than normal lights, which makes them very safe. Just make sure they’re not too bright during the night.

The answer to the question: do cats need light at night is no. Cats are fine in the dark without light, but sometimes they may have difficulties seeing in total darkness. That means that they need a small amount of light in order to see perfectly in the dark!

We know that cats are more active during the night, especially at dawn and dusk. They have remarkable vision which enables them to see and move in the dark. Besides their vision, cats have other senses that help them move around in the dark safely.

ICats aren’t usually afraid of the dark as they’re predators in nature, but it can happen, especially in young kittens or older cats who can’t see or hear well anymore. In that case, you can leave a night light on, so that they feel calm and safe.

However, if your cat is completely normal, it’s better to avoid leaving the light on during the night when both you and your cat should be sleeping. Find a way to let your cat know that when you turn the lights out it means it’s sleep time. Stick to the routine for sweet dreams!