Do you know who Beluga is? And no – it has absolutely nothing to do with the beluga whale.

There is a chance you’ve seen a YouTube channel called Beluga. It is run by an American youtuber and it is a relatively big channel with 8.6 million subscribers (as I’m writing this) and that number will most definitely rise in the future.

The face of the channel is… a cat. It’s not just any plain old photo of a cat, the picture is actually that of the polite cat meme.

You must have seen this meme somewhere, it is a picture of a smiling cat, and people have started calling the cat the polite cat.

As the polite cat is the face of the channel called Beluga – the cat has become known as the Beluga cat.

As a result of the popularity of the channel and its characteristic use of the polite cat as a trademark, people have started wondering What breed is the Beluga cat?

Continue reading to find out which cat breed the Beluga cat might be, as well as some interesting facts about the Beluga channel and how it came to have a cat as an emblem.

Beluga Cat Breed: Hmm, Which One Can It Be? 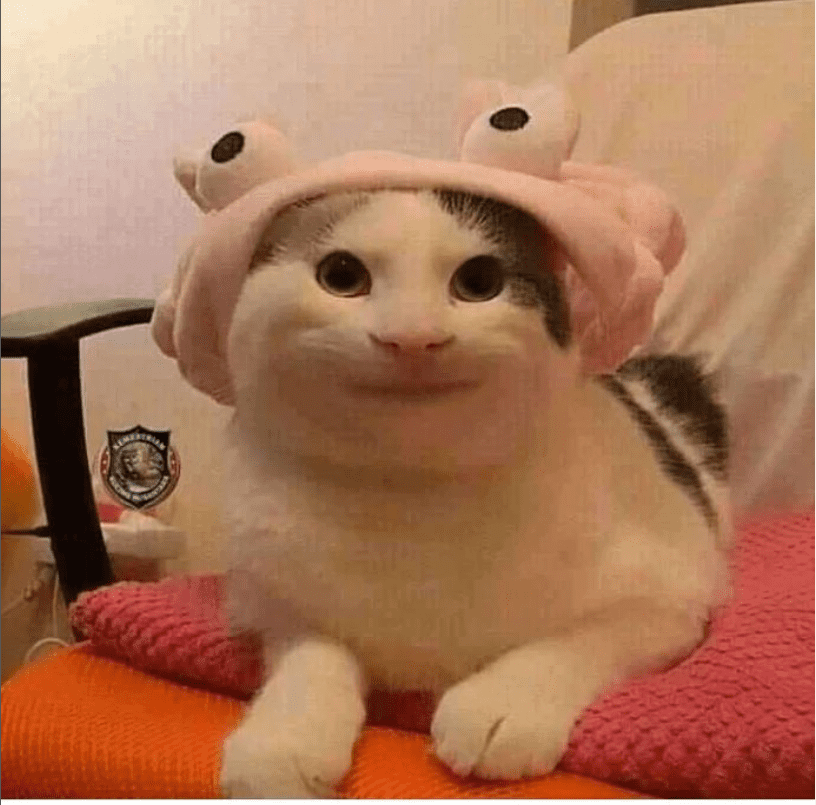 Let’s answer one question first: Is Beluga cat even real?

Well – the answer is a Yes and a No. It’s a Yes because the cat in the photo is someone’s cat in real life. That person took a photo of their cat, photoshopped a smile and put it on the internet.

However, Beluga cat is not real; it’s just a profile picture for a YouTube channel. It is a fictional cat that serves the purpose of entertainment, and it is sometimes featured in videos.

Nevertheless, it still is a cat (doesn’t matter if it’s real or not) so let’s get down to answering: Which breed is the Beluga cat?

From what we can see, it is a bicolored cat. It has white fur with some irregular dark patches of fur.

Cat lovers, what do you think – which breed could it be?

Well, we will most probably never know for sure, but we can make very good guesses!

The Beluga Cat Breed Is…

It is most likely to be a domestic short-hair cat. This type of cat is also called a house cat (or a moggy in the UK).

Domestic short-hair cat is not recognized as a distinct cat breed by any breed registry, because it probably has very mixed ancestry. The “little bit of everything” cat does not meet the standards of being an official cat breed.

When it comes to records of these cats in shelters for example, they are classified as domestic shorthair cats, and they’re a sort of pseudo-breed.

Domestic shorthair cats display a wide variety of physical characteristics – they can be of any coat color, any pattern, any eye color, any fur type or texture, and any size.

Nevertheless, they are the most common kind of cat in the USA; as many as 95% of all cats in the USA are domestic short-hair cats.

The Interesting Story Behind The Beluga Cat

In order for us to get to the bottom of the story behind the Beluga cat, let’s first introduce some important concepts around this iconic cat. 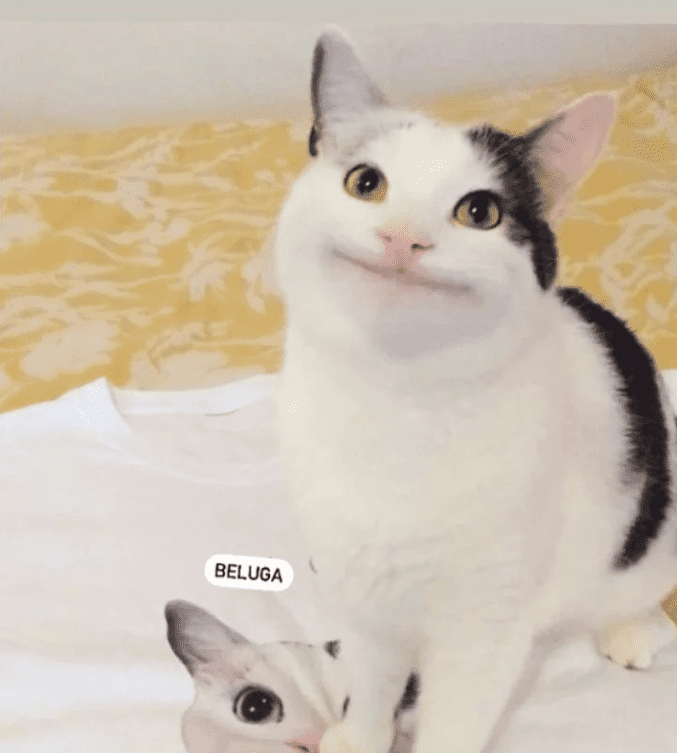 Beluga is the name of a very popular YouTube Channel and also the name of the main character in all of the videos.

The channel was created in 2017, but the creator started uploading more actively in 2021. In a very short period of time, the channel reached 1 million subscribers.

Now, it is considered as one of the fastest growing YouTube channels in the history of YouTube. At the time of writing this article, it has 8.55 million subscribers and 1.42 billion views.

Discord conversation with no voice-over or videos regarding memes are the main topic of the Beluga’s videos. Every video is a short 2-3 minute long video usually revolving around a particularly interesting Discord conversation. Beluga is a character from the Beluga Cinematic Universe.

All of Beluga’s short videos are very unique, interesting and… a bit unusual. Check out the most popular video on the channel below to see what I’m talking about:

Beluga is the main character in a cast of characters featured in Beluga YouTube videos. Beluga is the narrator and the other characters include: Pablo, Laster, Eugene, Skittle, Skittle-chan, Pepper, Hecker, Vladimir, Snowie, Walt, and many more.

Each character has a distinct personality and they’re all all connected as their stories intertwine. They are either family, best friends, love interests, enemies, or just acquaintances. One or two characters will be found in most videos.

The Beluga Cinematic Universe has a very involved fandom  who take a huge interest in the channel.

To learn more about Hecker, I suggest you check out: Hecker Cat From Beluga Cinematic Universe Is A Real Cat!

The polite cat meme is an image that originally surfaced on 9GAG (a website with a bunch of funny memes and GIFS) that features a smiling cat. The cat’s name is Ollie and he is looking upwards towards the camera with a polite expression.

It was uploaded to that site with the caption “My face when someone expects me to be excited about something that I’m not excited about”.

Ollie the polite-looking cat blew up on the internet after another user screenshotted a conversation between Bruce Landlord and himself. In the conversation, the landlord told him that there is a ‘no pets-allowed’ policy in the apartment, and he responded with a picture of Ollie. The landlord’s response was funny – he was going to make an exception because the cat “looks very polite”.

After that, an avalanche of memes featuring The polite cat hit the Internet, and now – Ollie will live on as a meme forever.

Let’s Sum It Up 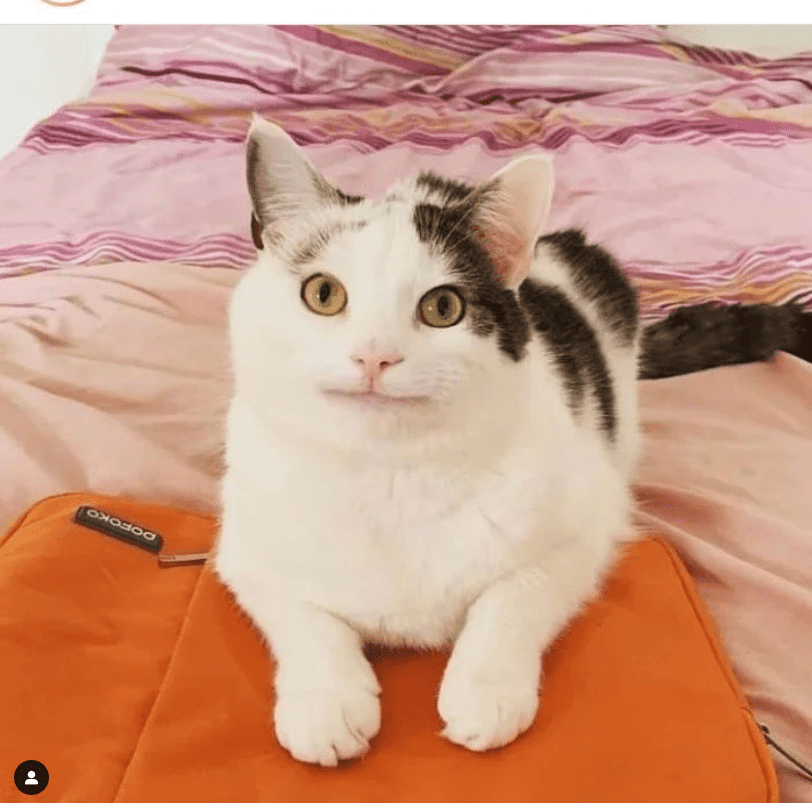 In order to make everything clear, let’s answer some basic questions about the Beluga cat!

Who Is Beluga Cat?

Beluga cat is a trademark of the Beluga YouTube channel. This channel’s profile picture is that of a cat, and considering the channel’s name is Beluga – the cat is conveniently named Beluga cat.

Sometimes it is misspelled as Begula cat, which I find quite funny. I even started mixing Beluga with Begula while writing this article…

There is no Beluga cat in real life. It is simply a cat whose photo was taken and the photoshopped photo started trending as the polite cat meme.

Who Is The Owner Of The Beluga Cat?

The “owner” of the Beluga cat is the owner of the YouTube channel named Beluga. To be more precise, we now know the name of the youtuber running this channel; Aretz.

That is pretty much all the internet knows. Aretz may not even be his real name… who knows?! He has kept his details private for years now. However, he did do a face reveal in 2021, so at least we know what he looks like for all those super fans out there.

Where Is Beluga Cat From?

Beluga cat is “a child of social media”. First, there was a real cat. Then it got photoshopped into a smiling cat. Then it turned into the polite cat meme. After all that, it is now used as the profile picture of a YouTube channel. Quite a road for one photo of one cat…

I guess the answer is: the Beluga cat will be alive as long as the Beluga YouTube account is alive…

As for what’s happening with the cat from the photo in real life – that information is completely unknown and I don’t think anyone is making the effort to find out. After all, it would be kind of weird, don’t you think?

What Is The Meaning Of Beluga?

Beluga is just the name of a popular YouTube channel. How the owner of the channel came up with it is unknown.

Which Cat Breed Is Beluga?

There is no beluga cat breed.

The Beluga cat (the cat from the profile photo of the Beluga YouTube channel) is thought to most likely be a domestic shorthair cat. It does not have any distinct features that can be attributed to a specific cat breed.

What Is The Lifespan Of A Beluga Cat?

Considering it is not a real cat breed, there is no lifespan to be talked about!

How Many Colors Of Beluga Cat Are There?

Beluga cat has only two colors – white and black/ very dark brown. The base color is white, while the patches are very dark. The most notable black patch is around the cat’s left ear.

Are you disappointed that the beluga cat breed doesn’t actually exist?

The name beluga cat does sound cool to me – I immediately associate it with the beluga whale so I imagined a cat that is probably huge and white, but extremely friendly and social, just like beluga whales are.

However, beluga cats do not exist in real life. Beluga cat is just a trademark of the YouTube channel named Beluga. It is a funny cat – it is smiling and looking at you. You can’t really decipher that facial expression – it could mean 100 different things. That’s why it became an extremely popular meme.

I must say, it was a little bit strange writing this article, but I admit – I had a lot of fun. It was different to research a fictional cat but I learned some fun facts along the way and writing about a profile photo (that is also the polite cat meme) of a famous YouTube channel is something I guess I can take off of my Things to do before you die list…

If you’re interested in reading about some real-life cat breeds, I suggest:

The Beauty Of The Chocolate Point Ragdoll Cat

Siamese Cat Cross Eyed – Why Your Meezer Looks Like That

Hecker Cat From Beluga Cinematic Universe Is A Real Cat!

[…] It is now regarded as one of the fastest-growing YouTube channels in the history of YouTube. Read more about Beluga and which cat breed it can be in Beluga Cat Breed: A Mystery, Solved! […]

i used to watch beluga is he dead