Along with their elegance, Siamese cats (also colloquially called Meezers) are intelligent, loving, and loyal animals that are adored by cat fanciers around the world. They are as far away from the average domestic cat as it is possible to be.

Many people want these cats in their families because of their unique appearance and bold character. Siamese cat cross eyed is a real gem among cats.

The vivid, almond-shaped blue eyes and silver-gray shiny coats with just enough black on the paws, head, and long tail (which are called color points) will make you fall in love with them instantly.

Although many Siamese cats are silver-gray, you should know that their short hair coats can also be red or orange, chocolate brown, cream, and even blue or lilac-colored.

When we think about Siamese cats, the image that pops into our heads is the modern Siamese cat, which is the result of years of selective breeding and line-breeding.

On the other hand, if we look at the traditional Siamese cats that originate from Thailand, we can see that they have crossed blue eyes and long kinked tails.

So, if the secret of the majestic nature of these cats lies in their eyes, then why are they sometimes born with crossed eyes?

The Phenomenon Of The Siamese Cat Cross Eyed Look 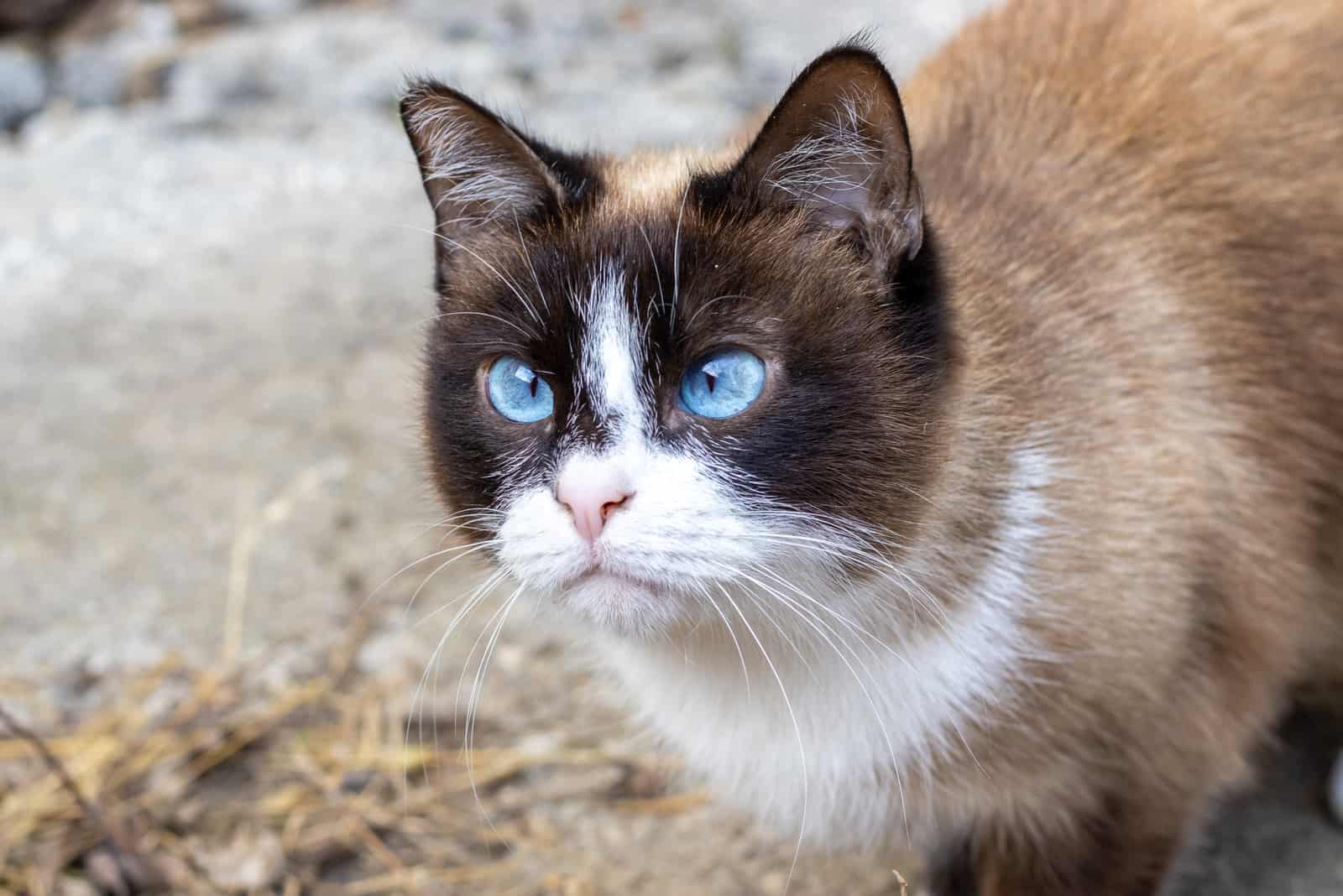 Most breeders want to avoid cross-eyed defects, but this cute flaw can’t always be completely avoided. The reason why Siamese cats have crossed eyes is due to a genetic condition called Strabismus.

The retina, which is the innermost layer of the eye structure, is located near the optic nerve and in the center of the eye, but in the case of Strabismus, it is diverted, rendering them unable to perceive a clear image.

It’s also worth noting that not all white cats are albino. Albinism is a genetic condition in which the body does not produce normal levels of the pigment called melanin.

Siamese cats are born with a gene that is similar to the albino gene, but it does not color their eyes pink. This gene is sometimes dubbed the Himalayan gene.

Siamese kittens are born white or cream and as they grow, you can see their coats developing amazing color patterns on their paws, nose, and tail.

The genetic flaw in the structure of the Siamese cat’s eyes originates from a genetic disorder of neurological origin.

This disorder is an abnormal crossing of visible fibers within the cat’s central nervous system.

Are Crossed Eyes In Siamese Cats A Reason For Concern? 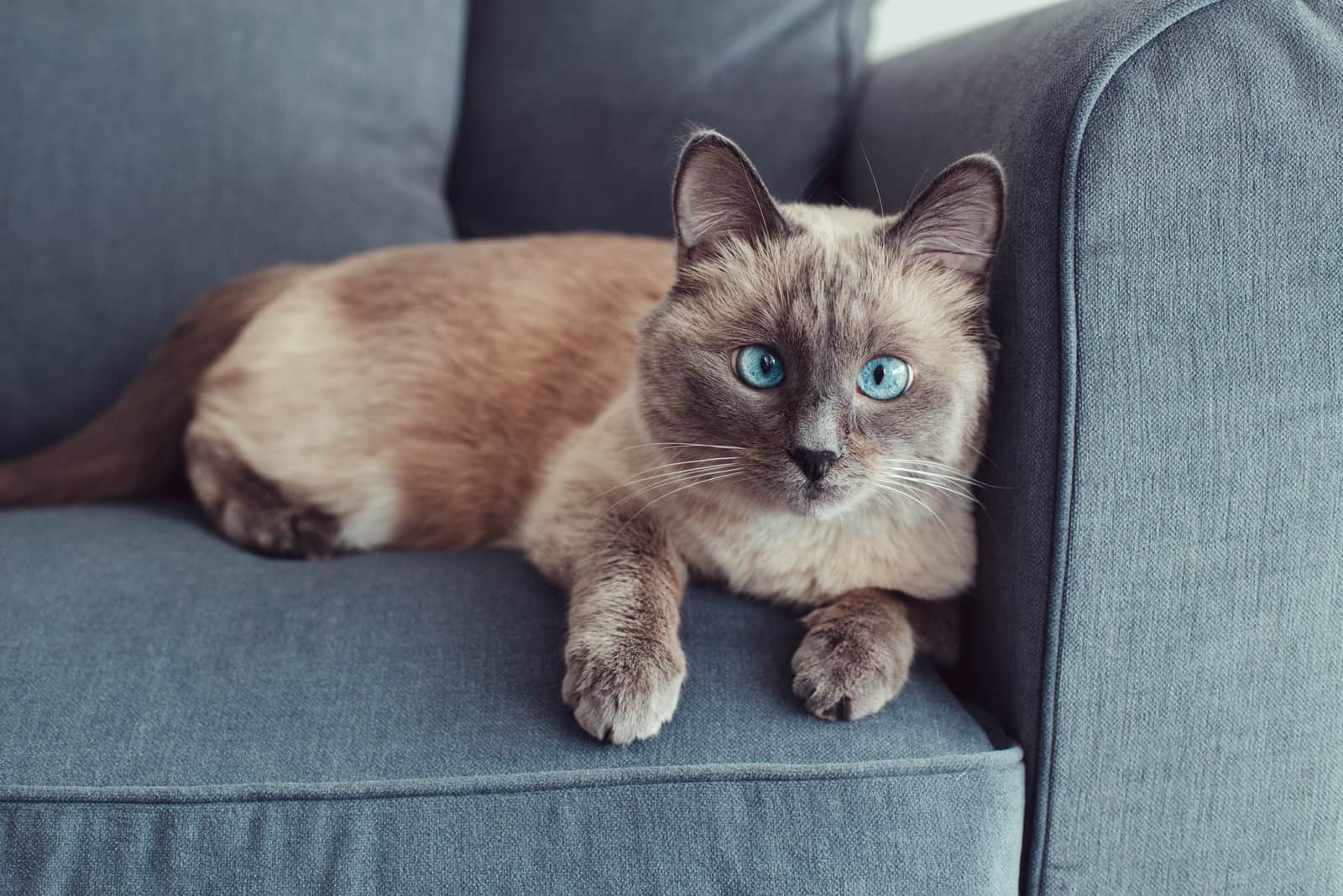 Usually, when people see a Siamese cat cross eyed, they can’t help but wonder whether or not the cat is in any discomfort, or whether it can even see anything.

However, crossed eyes in Siamese cats really aren’t a reason for concern because the condition doesn’t necessarily affect the kitty’s quality of life.

In fact, most Siamese cats with crossed eyes are still as elegant, playful, and energetic as their straight-eyed cousins.

In some cases, crossed eyes are associated with poor depth perception and fixed peripheral vision.

A Siamese cat cross eyed sometimes must cross her eyes in order to see clearly.

This is just something that they do, and they don’t feel uncomfortable doing because it feels completely natural to them.

They are still our favorite little kitties, and there is no reason they can’t enjoy a happy life playing, climbing, meowing, and purring.

What If My Cat Isn’t Born With A Cross-Eyed Condition? 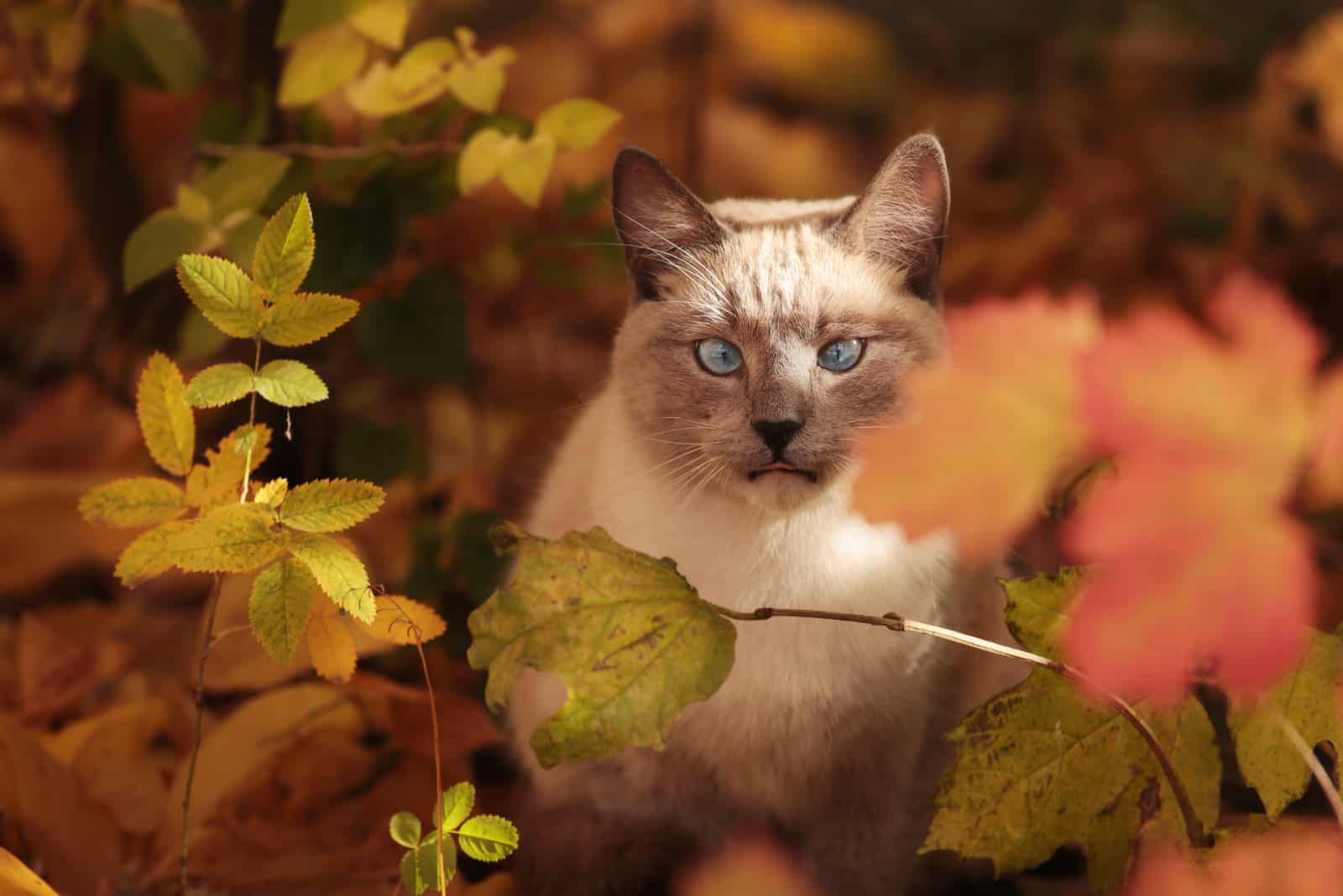 If you have a cross-eyed Siamese cat who suddenly becomes cross eyed, you can go to the veterinarian who can give you a diagnosis. For that, you will need to have the cat’s full medical record so that the vet knows everything that might be relevant to their condition..

After the vet has carried out any necessary examinations, you will have a better view of any biological and neurological requirements your cat may have.

As the owner of a Siamese kitty, you have to pay attention to these changes because it is possible that these problems are in the eye, ears, or reflexes.

Several things may lead to a cross-eyed condition so blood tests should be carried out to rule out leukemia or cancer.

There is another common problem that Siamese cats may develop with their eyes, and that is nystagmus.

This is a condition that causes the unintentional and rhythmic shaking of the eyeballs, meaning that the eyes move involuntarily back and forth.

History Of The Siamese Cat 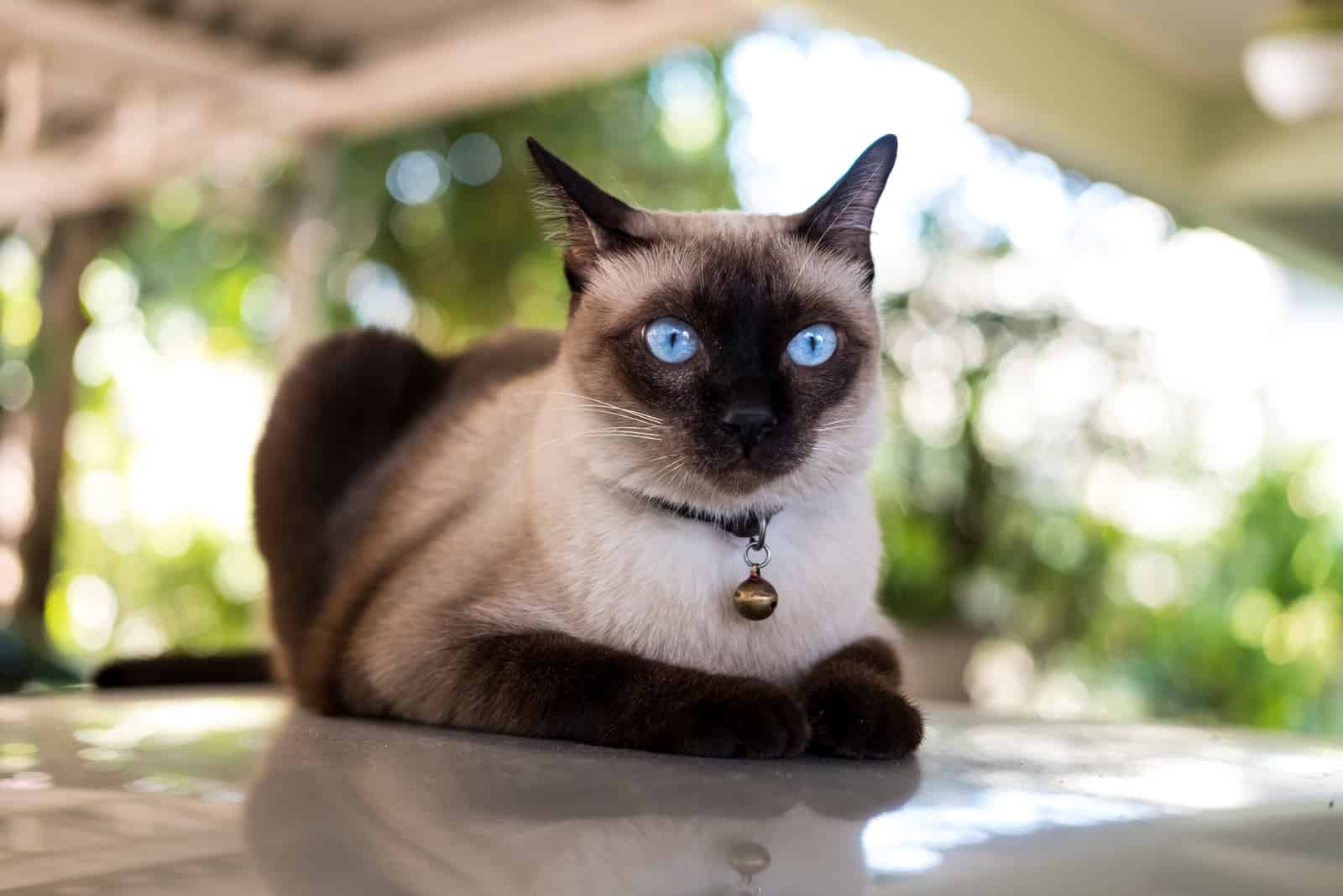 Despite the fact that the origin of Siamese cats is not certain, they are popular around the world for their magnificent looks and clever mind.

It is believed that Siamese cats first appeared in ancient Thai manuscripts in Thailand close to the 14th-century, which means they can be considered one of the oldest cat breeds.

According to The International Cat Association (TICA), the name Siamese comes from Siam’s ancient manuscripts where these cats were first noted.

Throughout history, it was believed that Siamese cats were special companions to royal and prestigious people.

It was considered an outstanding privilege to be given a Siamese cat as a gift. However, if you found yourself stealing one it was considered to be a most horrific act and the punishment would have been death.

Another important role that Siamese cats fulfilled was to guard the sacred Buddhist temples.

The Legend Of The Siamese Cat 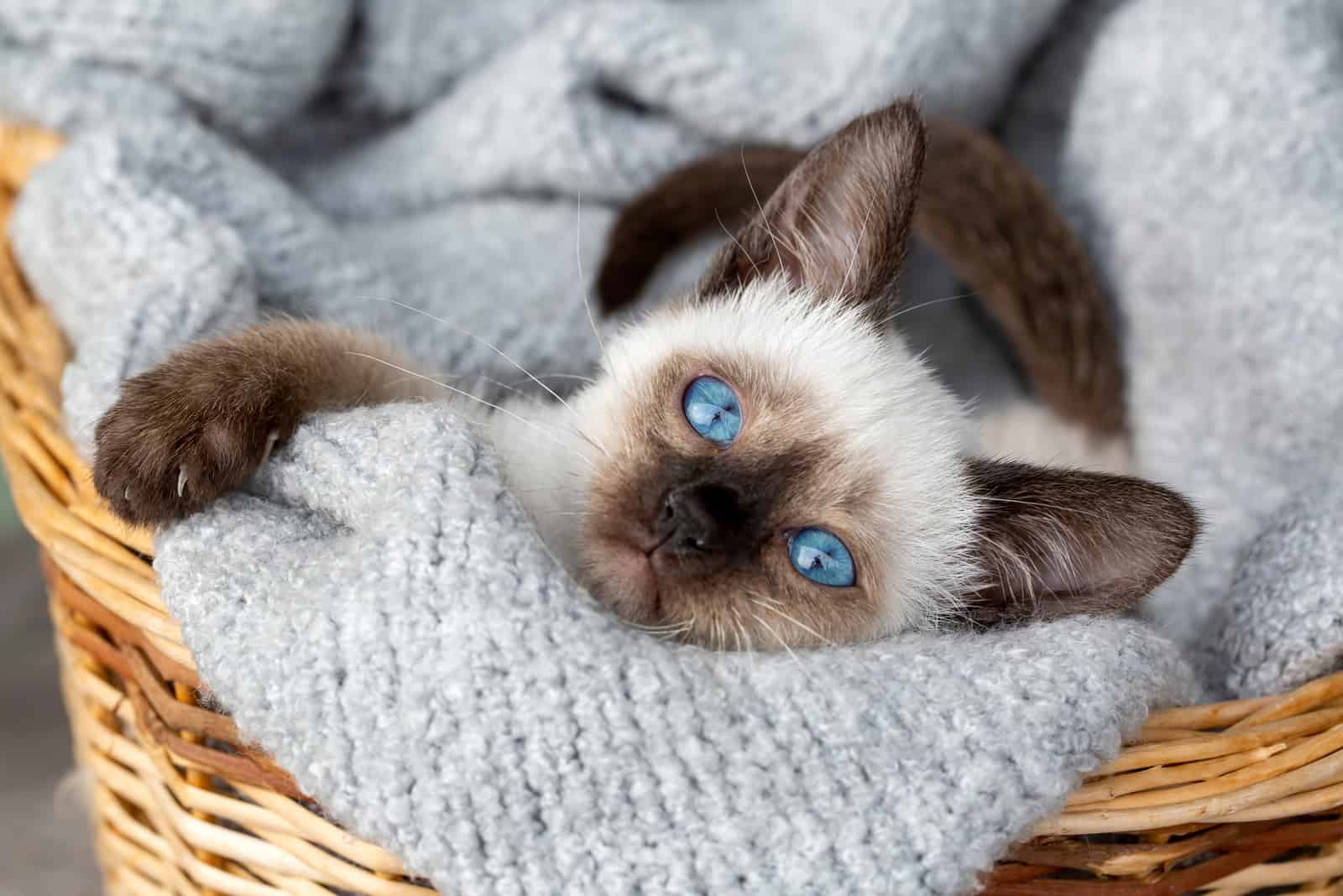 There are a lot of legends surrounding Siamese cats, especially their crossed eyes and kinked tails.

The first legend dates back to the cats of Siam. The King of the Siam kept Siamese cats as pets, and their role in his kingdom was to provide extra security and keep the royal goblet safe.

Legend says that the Siamese cats were so bewitched by the goblet that they gazed at it all the time and protected it with their long tails and powerful presence. Therefore, their eyes stayed crossed, and their tails became kinked forever.

Another legend which also dates back to ancient Siam tells of angry Barbarians who were intruding on the holy temples with the sole goal of stealing the holy jewels and other precious items.

It is said that the Siamese cats rushed in to help and successfully protected the holy treasure and won the battle. It is because of this that the monks glorified and honored them.

As a reward for their bravery, they got their very own pair of jewels for eternal honor; their gorgeous bright blue eyes.

There is no doubt that the Siamese cat breed is exceptionally stunning, as well as loving, and affectionate.

A fun fact is that some cat owners specifically seek out Siamese cat cross eyed variety because of their unique resemblance to the traditional Siamese cat.

If you properly socialize your Siamese kitten it could be the most playful and friendliest cat you ever came across.

With crossed eyes or not, overall, I don’t think that matters after everything you know now.

Whether you already own a Siamese kitty or not, it would be a shame to reject one just because it’s cross-eyed.

4 Main Types Of Siamese Cats That You Will Adore

[…] Siamese cats may often have conditions like the crossed-eye look and crooked tails. There are not a lot of explanations for these features, and there are a few cat […]

The Most Popular Cat Legends And Myths

[…] cats with kinked tails and cross eyed Siamese cats are very common. These conditions happen due to genetic […]

Siamese Cat Price Range – This Is How Much They’re Worth

[…] You might also want to check out: Siamese Cat Cross Eyed – Why Your Meezer Looks Like That […]

[…] Siamese Cat Cross Eyed – Why Your Meezer Looks Like That […]