Cats have a very strong hunting instinct, which means that pouncing on a small, escaping animal is a thing of their nature.

Do cats eat lizards? You bet they do! These slippery, quick amphibians are a prime source of entertainment for both wild and domestic cats.

Even though most activities that give your cat the opportunity to enjoy the thrill of the hunt are good for their activity levels and for keeping them entertained, you should probably stop your cat from eating lizards.

There is a plethora of poisonous lizards, and your cat’s health can be severely damaged if they ingest one. 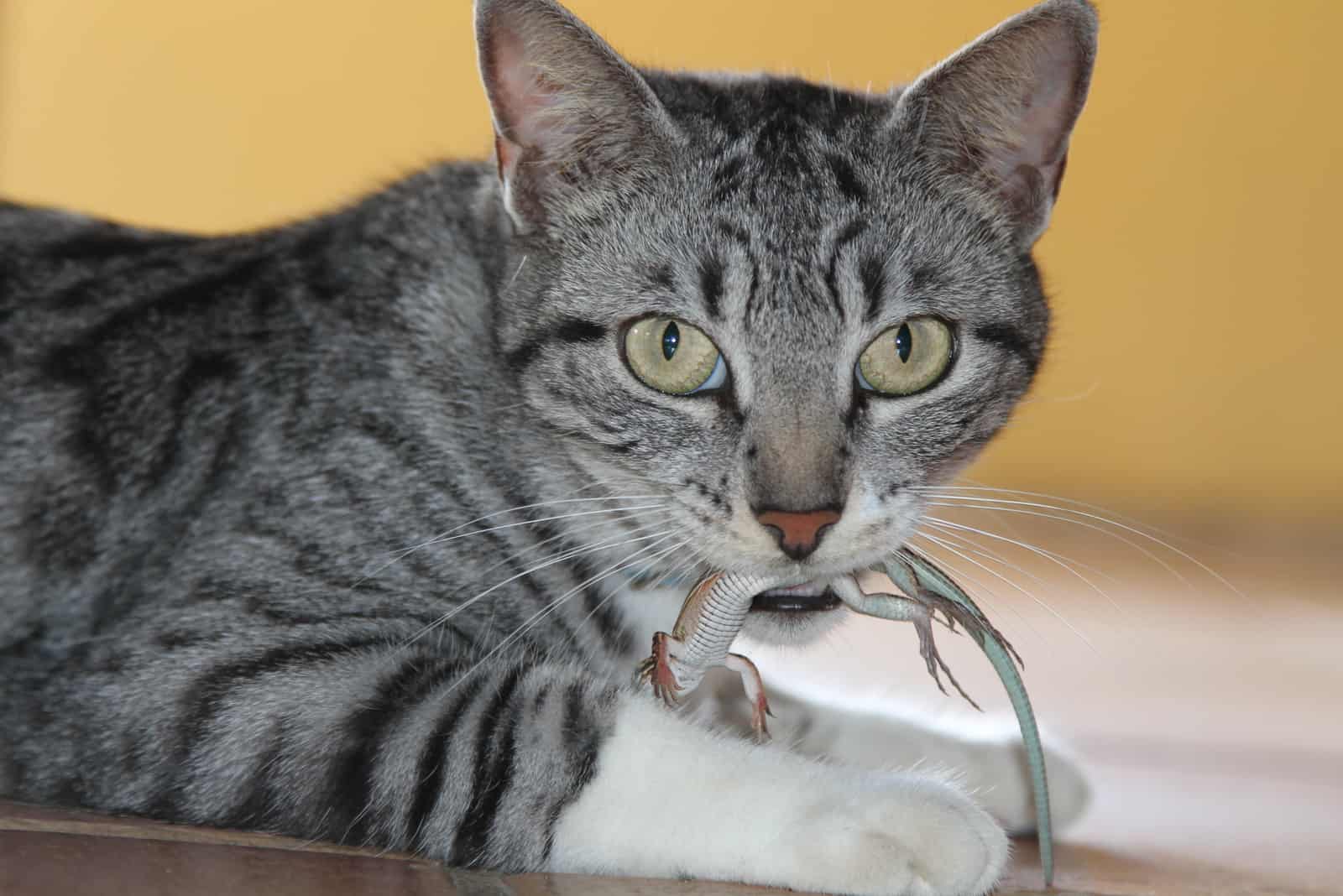 Small animals, like small lizards, mice, toads, etc., are all very interesting creatures that your cat likes to hunt.

Even though they have been domesticated for a long time, cats still have a natural instinct to hunt. Many cat owners, especially those that have indoor cats, know how important it is for a cat to hunt.

Salamanders, geckos, and other species of lizard are all perfect animals for your cat to hunt.

They are usually non-confrontational, and will run at any sign of danger. This, of course, will reinforce your cat’s understanding that these live lizards are prey, which means that it will go out of its way to pounce on them.

So, if you have any pet lizards, we suggest you keep them separate from your cat, since this combination can only end in disaster.

Of course, if you have a bearded dragon, as opposed to some other house lizard, it may be able to defend itself, but we recommend you don’t risk it.

Cats kill lizards out of fun, and they won’t hesitate to do it to your pet lizard.

Is It OK If My Cat Eats Lizards?

Even though it’s perfectly normal for lizards to become cat food, we recommend you stop the feast if you see it happening.

Cats eat lizards that they play with, and this should be discouraged, since many lizards carry parasites that can negatively affect your cat’s health.

This doesn’t mean you have to stop your cat from chasing lizards. As wild animals, cats are natural predators and they need to engage in hunting activities to keep themselves occupied and entertained.

If your cat is chasing tiny lizards, like anoles, it only means that it’s acting naturally. However, if you have an outdoor cat, don’t let it exterminate the lizard population entirely.

Most lizards feed on small critters, like cockroaches. This means that the more lizards your cat kills, the more cockroaches will be entering your house.

So, if your question is “should I stop my cat from eating lizards”, our answer is YES.

Lizards do quality work around your house, and your cat can suffer severe health consequences if it eats them.

Recommended Read: Do Cats Eat Snakes? The Answer Might Surprise You 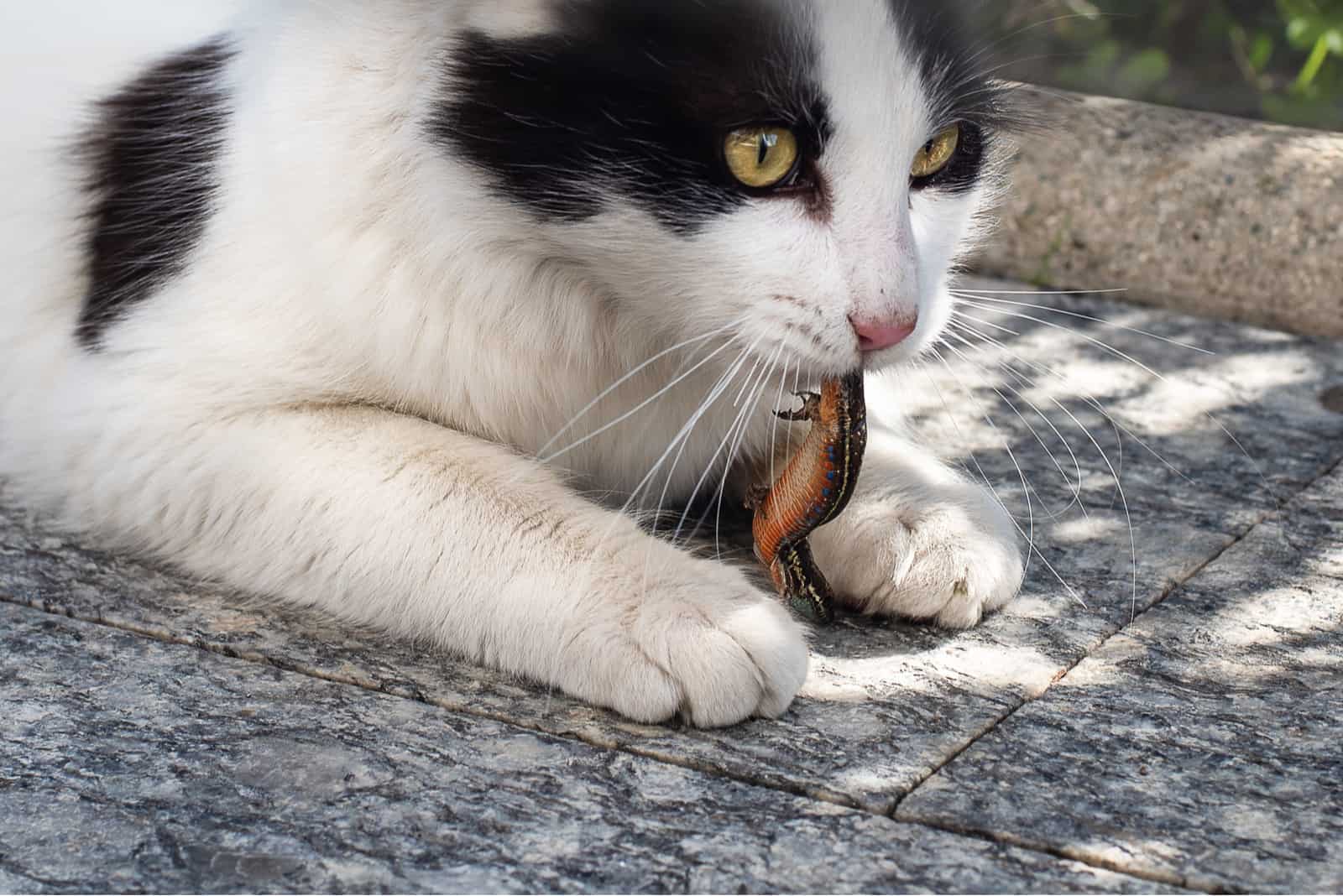 There are many dangers for a cat engaged in a lizard hunt!

Lizards like Gila Monsters and Komodo Dragons can grow to huge sizes. Although your cats cannot eat these monsters, they will certainly be in danger if there are any nearby.

Venom or poison can usually deal the most severe damage to your cat’s health, depending on the species of lizard.

Some lizards may also be carrying parasites, which will make your cat ill.

Continue reading to learn more about the toxins and possible diseases your cats can contract from lizards.

Although many species of lizard don’t exude toxins that can affect humans, this doesn’t mean your cat is not in danger. Small North American lizards can often be very poisonous.

Poisoning is very common and the toxicity will result in the following symptoms:

– Coma or lack of responsiveness

If you notice any of these symptoms, you should take your cat to the vet immediately!

Poisoning should always be taken seriously, and you won’t be able to do anything to help your pet without professional help.

Lizards like blue tailed skinks and salamanders can be very dangerous for your cat.

They are small and relatively easy to catch, but they have an anti-predator toxin which can result in poisoning, so beware which lizards you allow your cat to play with.

If your cat likes to regularly catch lizards, it could be in danger of contracting a serious disease.

Many reptiles and amphibians carry harmful bacteria that can easily be transferred to your cat if it ingests the infected animal.

The most common diseases your cat can contract by eating lizards are liver flukes and salmonella. Let’s take a look at these problems and their symptoms.

Liver flukes are a parasite that often infects reptiles and parasites in Hawaii or North America.

Since many of the smaller lizards, like newts, can be affected by this virus, your cat is in serious danger of ingesting liver flukes if it chases and eats these small prey animals.

This is especially true if you have an outdoor cat which probably spends a large part of the day catching these small victims.

This parasite can cause serious liver inflammation, and can also spread to the bile duct and gallbladder.

Here are the possible symptoms of liver flukes:

– Distention of the abdomen

If any of these symptoms are present in your cat, take it to the vet immediately!

Liver flukes can often be fatal, so consulting a professional is always the best bet.

Another bacteria that can infect your cat is salmonella, which is often contracted from consuming raw meat.

Even though most cats have the metabolism to fight off salmonella, it is important to take your cat to the vet to make sure.

These are the possible symptoms of salmonella:

Since the option of cooking the meat is not available for cats, they are very likely to contract salmonella. Most cats will fight off this bacteria without problems.

Indoor cats can be in more danger, since they aren’t used to processing raw food, as opposed to outdoor cats who hunt food more often.

However, if your cat has been sick recently and its immunity is low, contracting salmonella can have severe consequences. We recommend a prompt visit to the vet!

Can My Cat Die Of Lizards? 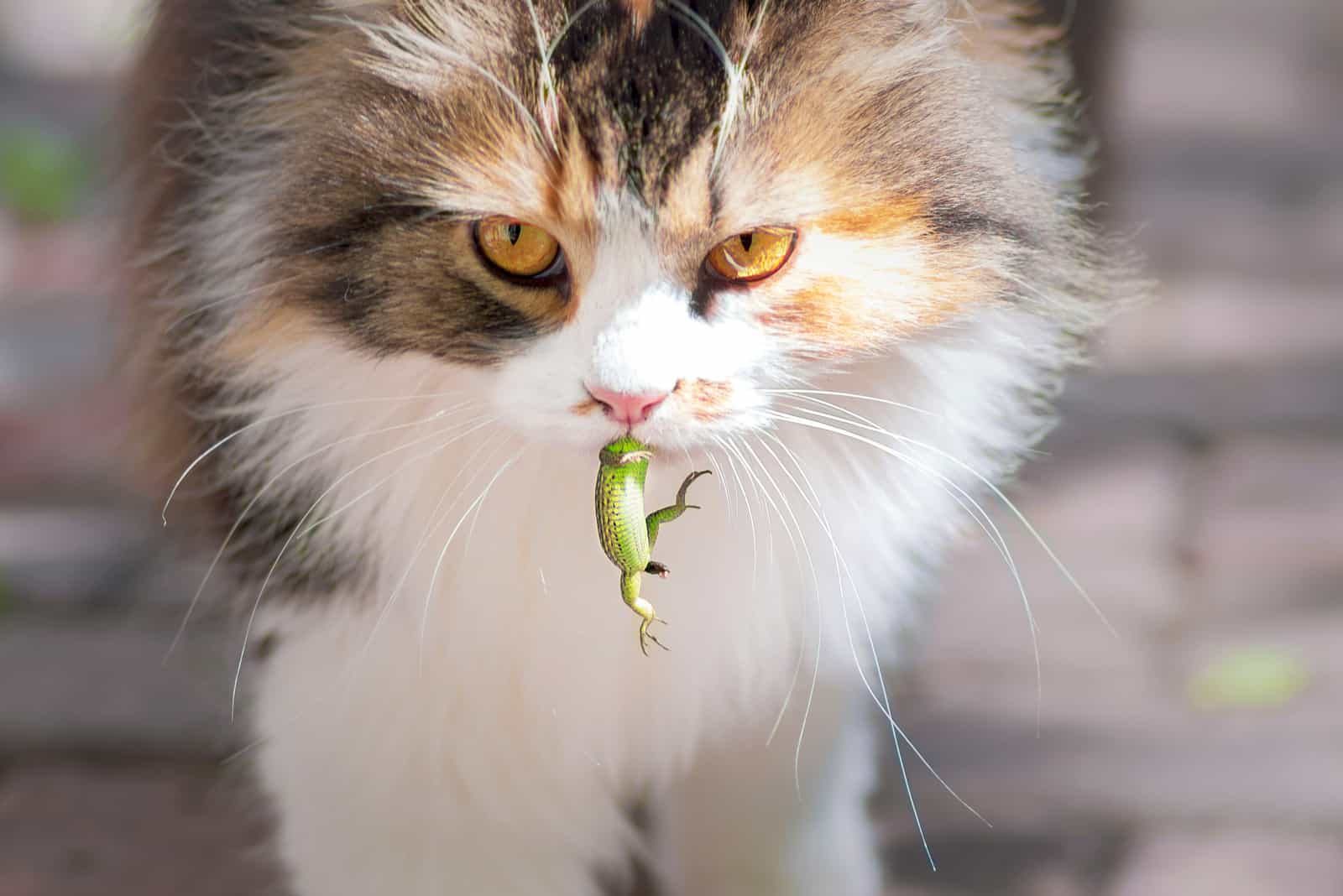 The short answer is Yes, there is a chance your cat might die if they encounter certain lizards.

Let us first address the group of lizards that your cat cannot kill, but can be killed by.

Mexican Gila monsters, Indonesian Komodo Dragons, Nile River monitors, and Bearded dragons are all species which are probably too big for your cat to kill.

However, your feline friend might still be hostile to these species, and most of them won’t take it lightly.

Larger specimens like Komodo Dragons could kill your cat in one swat without even having to use their venom.

Smaller species, however, won’t be able to defend themselves from your cat. In most cases, after the cat has had its fun, it will probably eat its prey, and this comes with a risk.

Many of the smaller species of lizard, like salamanders and skinks, are poisonous, which means that your cat will be poisoned upon ingestion.

Poisoning can have severe consequences. If your cat is poisoned and you don’t take it to receive professional help, it will most likely die from poisoning.

This is also true if your cat has consumed a lizard that’s carrying a parasite. The lizard does not have to be poisonous; if it carries dangerous bacteria, your cat could be in danger of dying.

Liver flukes affect several organs, and can result in death in as little as three months.

Your cat can also contract salmonella, but this probably won’t be fatal if the cat was healthy prior to this.

Why Is My Cat Bringing Me Live Lizards? 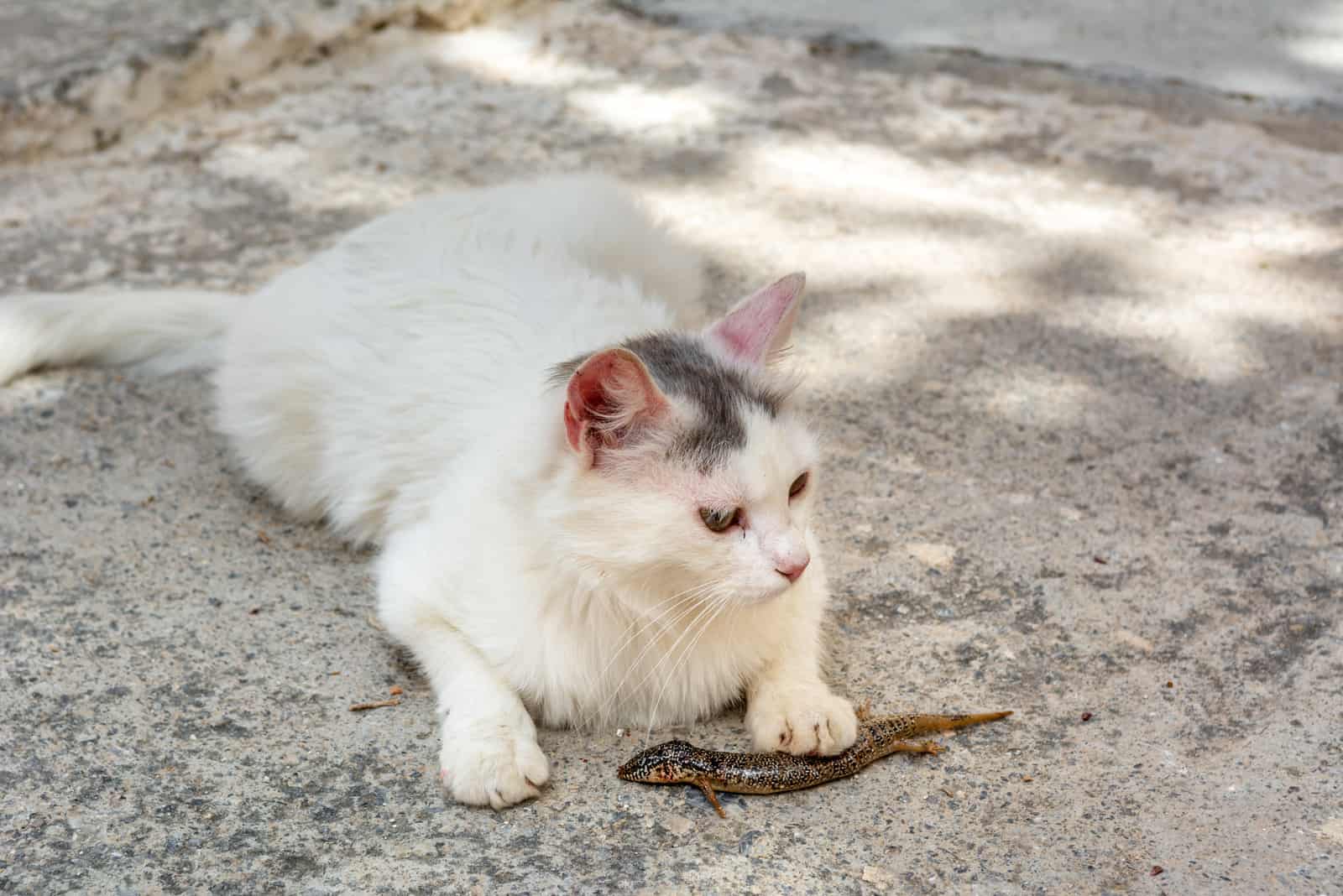 There are several answers to this question, but the most likely one is because they care about you.

We mentioned earlier how important a hunt is to a cat. Felines are master hunters and they need the opportunity to indulge in it regularly.

Most pet cats do not have to hunt for food, since their human masters provide them with it daily. This means that the hunt for a domestic cat is no more than entertainment!

If they bring their catch to you, it means they hold you in high esteem.

Your cat might be proud of the catch, so they’re bringing you this live trophy to showcase their skills to you, who they respect very much.

They also might be bringing you a gift to show their affection toward you.

Cats differ from a lot of pets when it comes to how they demonstrate their affection. The act of bringing live prey home shows that your cat loves and cares about you.

Lastly, your cat might think that you’re a terrible hunter.

Mother cats often bring live prey for their cubs to train with. So, if your cat is bringing you live lizards, it may want you to use them as a training utensil.

Or perhaps it just wants to provide something for the household.

Either way, if your cat brings you live lizards, don’t get mad, because they do it with the best intentions.

All in all, cats eating lizards is nothing out of the ordinary. Any small animals running quickly in the opposite direction are sure to prick up a hunter’s attention.

We recommend you do a bit of research to find out if there are poisonous lizards in your area. If there are none, you are safe to let your cat have all the fun in the world.

Just make sure that your cat doesn’t eat all the lizards, since they can be very useful in controlling unwanted pests around your property.

Do Cats Eat Ducks? Things You Need To Pay Attention To

Do Owls Eat Cats? 6 Ways To Keep Your Kitty Safe