Cat lovers, like myself, often ask about the prevalence of male orange cats. So, I’ve done some research on it!

A cat’s color comes down to genetics; so Bombay cats are always black cats because this is the only genetic possibility. Orange cats, whether they’re mackerel tabby or classic tabby, are mostly male.

If you know any ginger or marmalade cats they are much more likely to be male than female.

So, let’s investigate and find the answer to the hotly debated question, are all orange cats male? While most orange cats are indeed male, not all of them are.

The orange tabby cat can be female as well, but it happens a lot less often. The mix of an orange color and a tabby pattern is sex-linked, so let’s see why there are fewer female orange tabbies than there are males.

Are All Orange Cats Male? 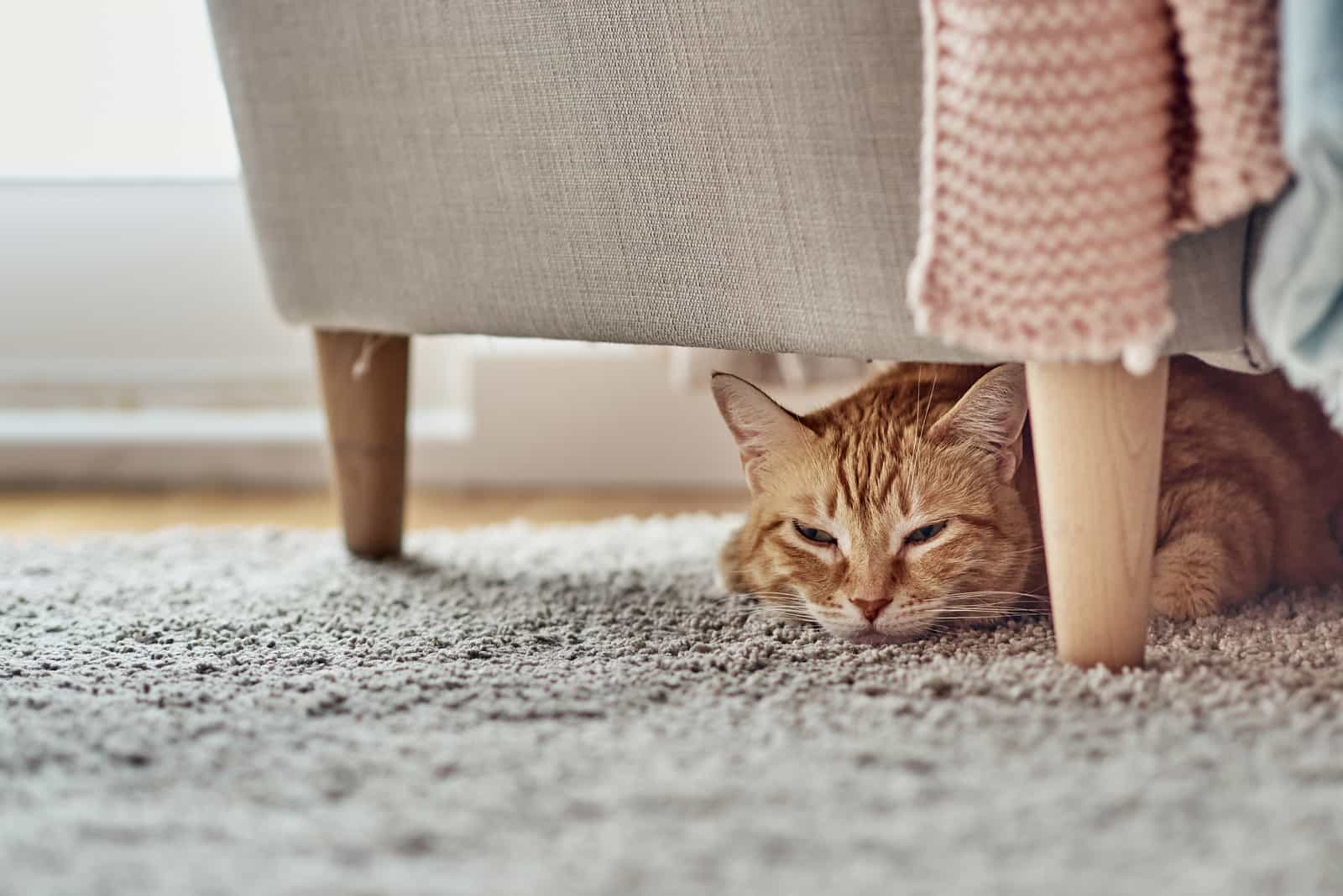 Coat color and coat pattern are two different things. Just like the spotted Bengal, the Abyssinian cat breed, which is known to have a unique ticked pattern but is mostly solid orange, or Siamese cats which are color point and usually have a cream color as a base.

Cats who carry the agouti gene are orange, and all orange cats are typically tabby, but this doesn’t mean all cats with a tabby pattern are orange-colored.

Most of these beautiful cats with orange fur are male, but not all of them. Let’s explore why.

There are many studies that have investigated whether all orange cats are male. On a basic level, the cat will be orange if it carries the orange gene; it has nothing to do with the specific breed of cat.

The reason why orange cats are more likely to be male and why female ginger cats are rare is that the female cat needs to carry this ‘orange’ gene on both her X chromosomes in order to be orange, whereas male cats will be orange if they carry any orange gene.

It is much less likely to carry the orange gene on both X chromosomes than it is to carry it on just one. Essentially, it comes down to simple probability.

As far as kittens are concerned, if the mother cat is orange, then you know that her male kittens will come out as orange as well.

It doesn’t matter what color the father cat is, the male kittens will always be orange-colored. If you wanted to get a female orange tabby kitten, both parent cats would have to be orange. 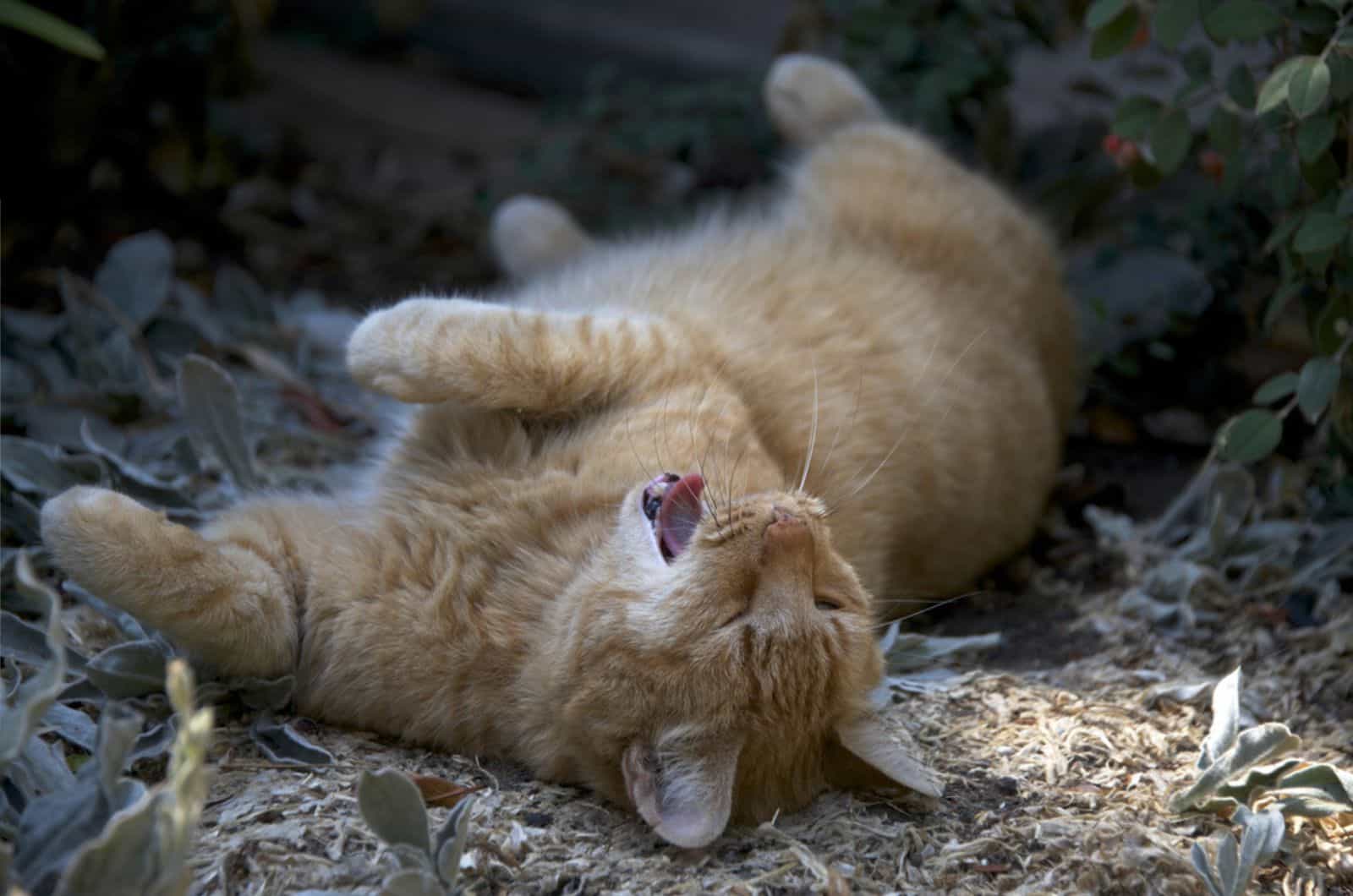 There are many orange cats that are famous or well-known. The first one that comes to mind is Garfield, the chubby, lasagna-loving cartoon cat. Then there’s Crookshanks, Milo, or even Puss in Boots.

There are probably many more once you start thinking about it, but even with just these few examples, it’s quite clear that orange kitties are incredibly popular!

Many cat owners claim that orange cats generally have loving personalities (if you’re a cat person you might argue that all cats have lovely personalities!). Orange cats are often considered to be friendly and loving.

How can this be true? As it turns out, there may be an element of truth in this reputation, even if it isn’t in the way people might expect.

Male cats have been found to be slightly ‘nicer’ than female cats, yet data remains inconclusive. As there are a lot more male orange cats, it would make sense that people would have noticed a tendency for these cats to be ‘nicer’.

There you have it! In some cases (like this one) a cat’s gender is connected to its coat color. Orange cats can have different color-pattern variations, but they are mostly tabby with different shades of orange.

The source of this orange color in their fur is pheomelanin, which is the same pigment that causes people to have orange (or red) hair.

Most orange cats are in fact tabby, as that is the coat pattern, just like calico. Calico cats resemble tortoiseshell cat coat patterns, and they usually have orange and black colors mixed together.

Male cats can have calico colorings if a mutation happens to occur somewhere in the process of growth in the womb. A male calico cat is likely to be infertile. 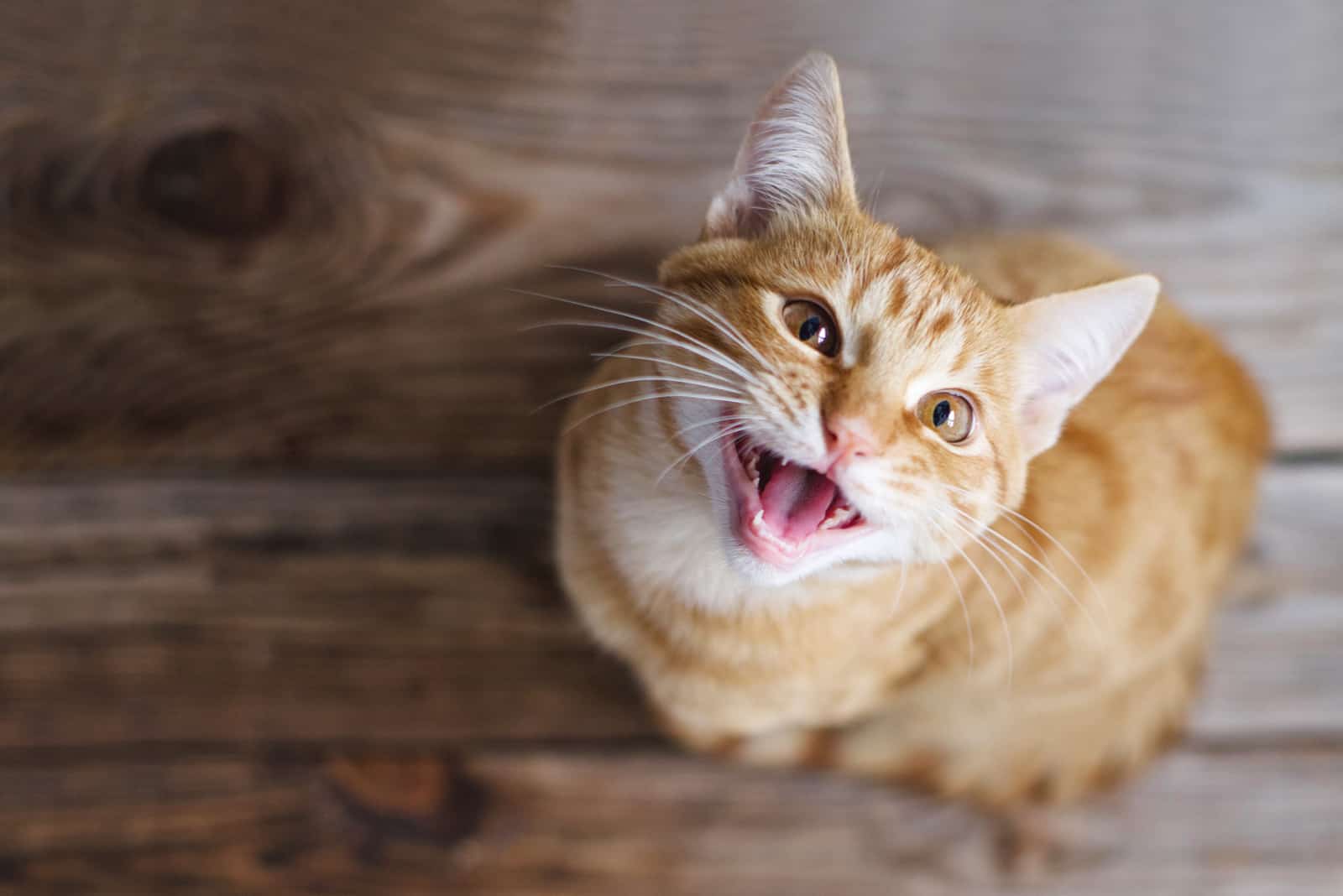 A cat’s coat color or pattern is due to its genetic makeup. Melanin is the deciding element in whether a cat has an orange coat. An orange coat develops when an individual cat’s melanin function changes, resulting in black pigmentation becoming orange.

The orange coat trait is determined by a gender-linked gene in cats. If a female cat is born orange-colored, she carries two orange genes that she had to inherit from both her parents, while for a male cat to be born orange, he only needs one.

As a result, roughly around 80% of all orange cats are male and only 20% are female.

Tabby cats have a very common coat pattern. Although orange is a common Tabby color, the ginger cat has a variety of colors and coat patterns, ranging from red to cream.

They are also distinguished by an ‘M’ mark on their foreheads. The eyes are commonly lined in black and sometimes the paws and lips of tabbies are splotched with black freckles. Thin lines of color may also be seen on the face.

The pink-colored nose is often outlined by a darker color as the color pigment is uneven. The basic stripe pattern is established by the tabby gene, which causes various coat pattern varieties.

Tabby cats are popular with cat enthusiasts because they have a classic look that people are fond of. Even cats that appear to be black are thought to possess the tabby gene. It is thought to be present in all cats, even cats from different breeds.

To learn more about the difference in coat colors and patterns in male vs. female cats, check out: How Different Are Male Vs Female Cats? Pros And Cons

Why Are Most Orange Cats Male? 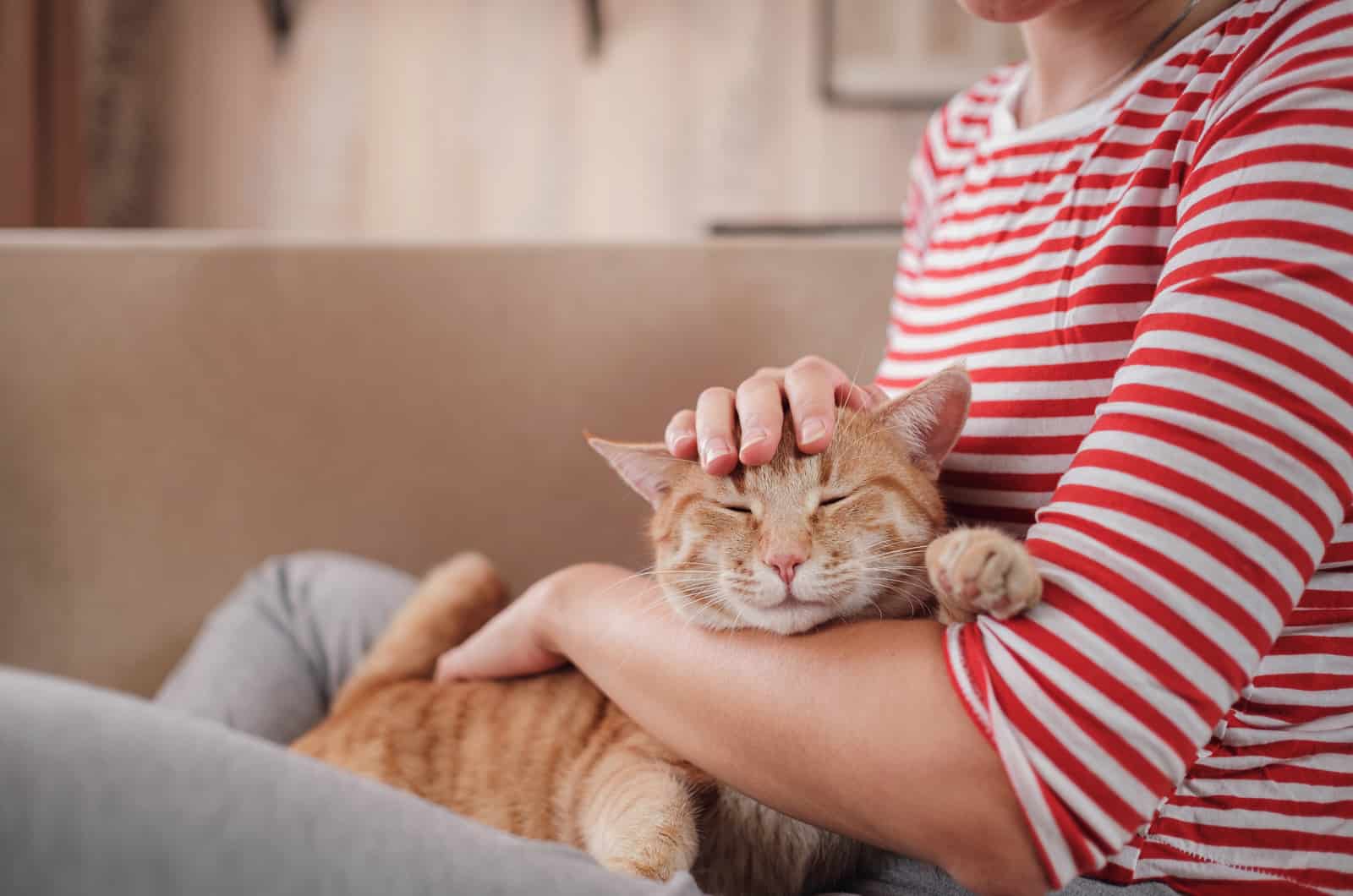 A cat’s color is determined by various genetic factors. One gene can be altered to change black pigment to orange by a change in the expression of another gene.

A female tabby can only be orange if she carries two orange genes (which she needs to inherit from both parent cats), while an orange male cat only needs one. This is why male orange tabbies are far more common.

A wide range of colors and coat patterns such as the traditional orange stripes, ticked tabby, spotted tabby, patched tabby, or even a mackerel coat pattern are all possible with an orange color variation.

As kittens mature, their eye color typically changes from blue to green or even brown or hazel.

How rare are female orange cats?

They are fairly rare; the overall percentage of orange cats that are female is just 20%, which leaves the remaining 80% male.

Scientists have discovered that the color of orange cats is associated with gender genes, with the X chromosome being responsible for the orange coloration.

No, orange and white cats are not always female. Cats that have orange in their fur coloring are usually male, but it is possible that a cat with orange-colored fur is of the female gender.

What is the scientific name for orange cats? 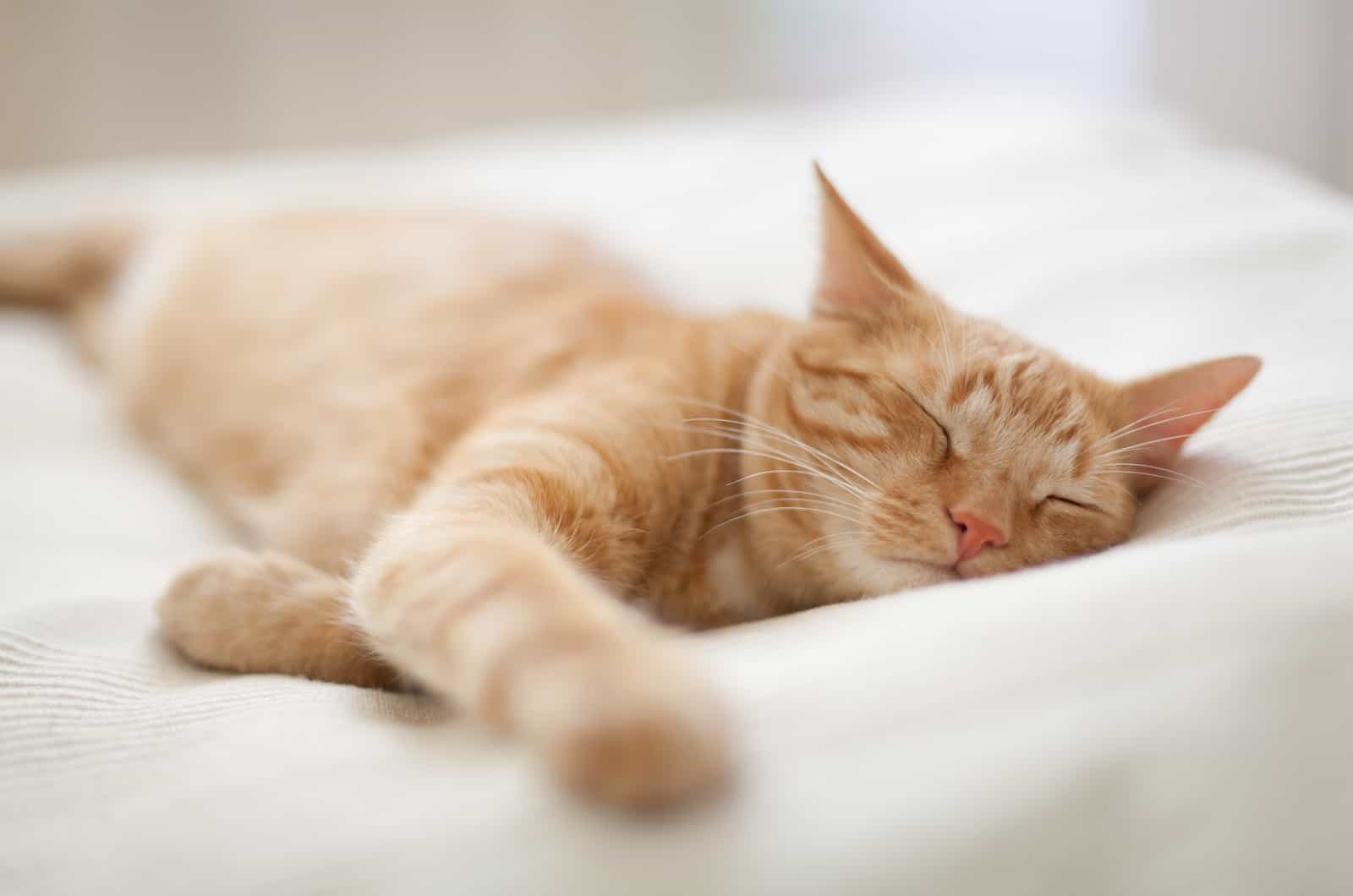 Tabby cats are domestic cats who have the ‘M’ mark on their foreheads, which is typical for orange-colored cats.

What is the percentage of orange male cats?

Around 80% of the total number of orange-colored felines are actually male, so female cats with orange coats are quite rare.

Is there an orange cat in the world that is female and not sterile?

There are no fertility issues with orange females because it is merely a color, even though the orange color here is linked to the cat’s gender, it has no connection to sterility.

However, there are sterility issues with males with extra chromosomes, as there generally are when any cat has an odd number of chromosomes.

So, if you’re picking a new best friend and you’d like an orange female kitty, take a close look at the breeding cats. Whatever you choose, I believe that no matter the gender or color, your life will always be better with a furry friend by your side.

The cat you choose will be the best cat for you because you’ll simply love it. However, if your heart desires an orange kitty, talk to a reputable breeder. Good luck!

• 17 Orange Cat Breeds And Interesting Facts About Them

• Orange Maine Coon – All About This Fascinating Color

What Are Those Black Spots On Cat's Mouth - Freckles Or Not?

[…] I find orange cats quite an interesting group of cats – they have many unusual characteristics, such as that most orange cats are male. […]