Himalayan Cats are a hybrid of the Siamese cat breed and the Persian cat breed, believed to have been created in the mid-20th century. Himalayans combine the Persian’s luxuriant coat with the iconic colors of the Siamese.

The Himalayan cat is a medium-sized cat but it appears larger than it really is due to its fluffy, long hair. This beautiful hybrid breed is long-haired with a colorpoint pattern, and with its doll-face and beautiful blue eyes, Himalayans are sure to win anyone over.

Himalayan Siamese cats are easily recognized by most people, so let’s see if there’s something that will help you to immediately recognize the breed in the future.

The Origins Of The Himalayan Siamese Cat 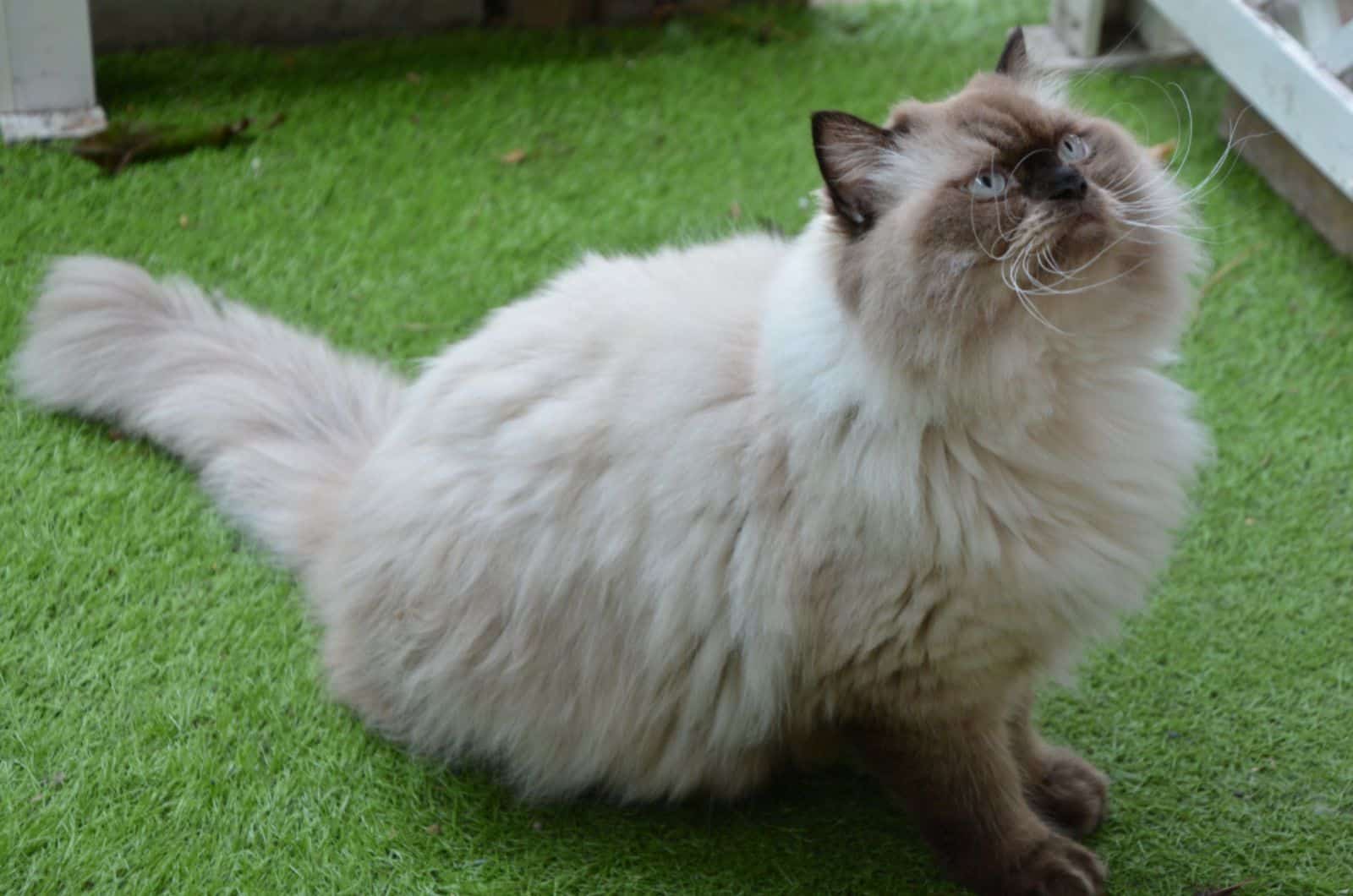 As early as the 1930s, researchers Clyde Keeler and Virginia Cobb wanted to mix the beautiful Siamese and Persian cats, because they wanted to combine the cobby body type, long hair, and colorpoint pattern of the two breeds.

In the mid-20th century, Persian and Siamese cats were crossbred to create Himalayan cats, which are now recognized by some breed registries as a distinct breed.

A woman named Margherita Goforth preserved this new breed, which was recognized by the CFA (Cat Fanciers Association) in 1957.

One of the world’s most distinctive and immediately recognizable cat breeds, they are beloved by many people across the globe.

Some cat associations recognize Himalayan cats as a colorpoint subcategory of Persians, while others categorize them as a longhair variant of the Colourpoint Shorthair breed.

Aside from the beautiful Himalayan Siamese cat, we know that cross-breeding cats is nothing new or unusual. There are many hybrid breeds.

While we all know that Siamese cats come from Thailand, there is no detailed origin story for this crossbreed. 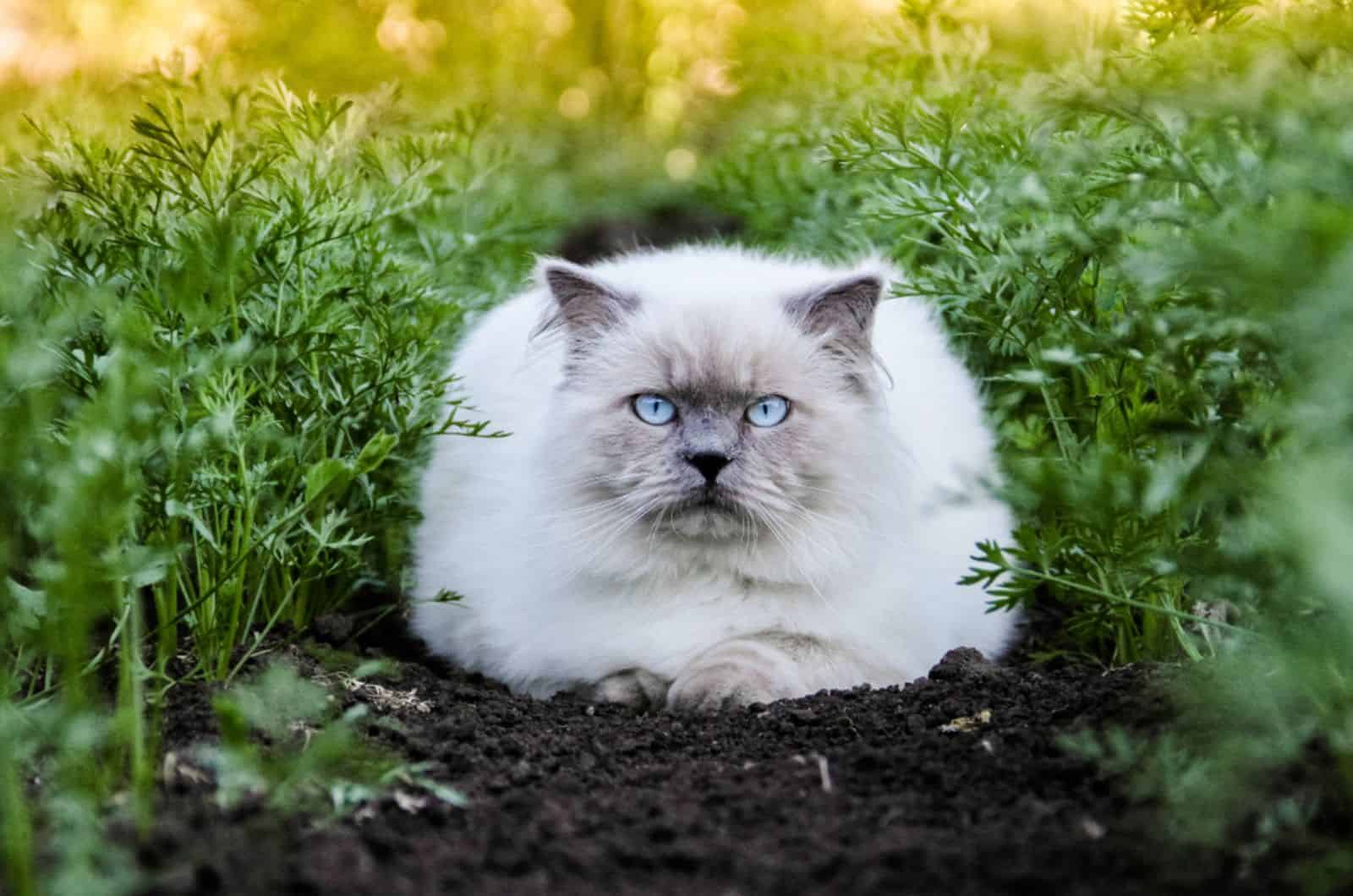 Himalayan cats are known to be affectionate, friendly, active, and social. They are also considered to be a particularly intelligent breed, never missing anything and learning commands and tricks very quickly!

Himalayan Siamese cats, just like Ragdoll cats, are often described as ‘dog-like’ cats because they’re easily trained and can learn to perform tricks, which has made them popular acting cats. For example, the cat from the movie Homeward Bound,Sassy, is a Himalayan.

Then there’s the most popular Himalayan Siamese cat named Jinx. You probably know which movie I’m talking about. Meet the Fockers!

This is a hugely popular comedy, and it’s not surprising that Jinx is one of the most popular cats in the movie industry, as he has acted side to side with Robert De Niro.

Himalayans are energetic cats so they need plenty of opportunities to be physically active, play, solve problems, and interact with their human family. At the same time, they love to be lap cats as well.

If they’re not satisfied with their surroundings or they aren’t getting enough attention from you, they are more likely to engage in unwanted behaviors such as vocalizations and scratching.

Siamese cats are known to be chatty, so the Himalayan mixed breed tends to be vocal. Himalayans are best described as a mix of talkative Siamese and quiet Persians, so after many generations of cross-breeding, they are still always somewhere in between.

Himalayans are also quite lazy, but what’s good is that they easily adapt to life changes; they are quite laid back and don’t get as stressed by change as other cat breeds might.

Himalayan cats and Siamese cats have a lot in common in terms of personalities, so it’s likely that your Himalayan kitten will be the same.

Himalayan Siamese cats could have been milder, i.e. quieter, than the Siamese if both their parents were calm, but the addition of fresh Siamese genes brings the vocal side back. So you may hear your Himalayan kitty meow when you least expect it.

These cats seek out physically and mentally stimulating experiences and will go to great lengths to reward you with luxurious affection if you can provide it. The Himalayan Siamese cat is an approachable, social, and friendly pet.

They do best in homes where people have time to cuddle and play with them each day and where they’re not left alone for long periods of time. They may be distressed after long periods alone, and may scratch furniture, make noise, or try to escape.

They appreciate the company of another cat to keep them entertained.

Any Special Needs When Grooming?

However, kittens of later generations of Himalayans could have a mix of long-haired and short-haired siblings.

Himalayan Siamese cats are not hypoallergenic since allergies are caused by proteins in saliva that migrate into the coat during grooming.

Therefore, no cat breed is hypoallergenic. If you are allergic to cats, the Himalayan Siamese may not be the right pet for you since longer hair requires a lot of licking and self-grooming. 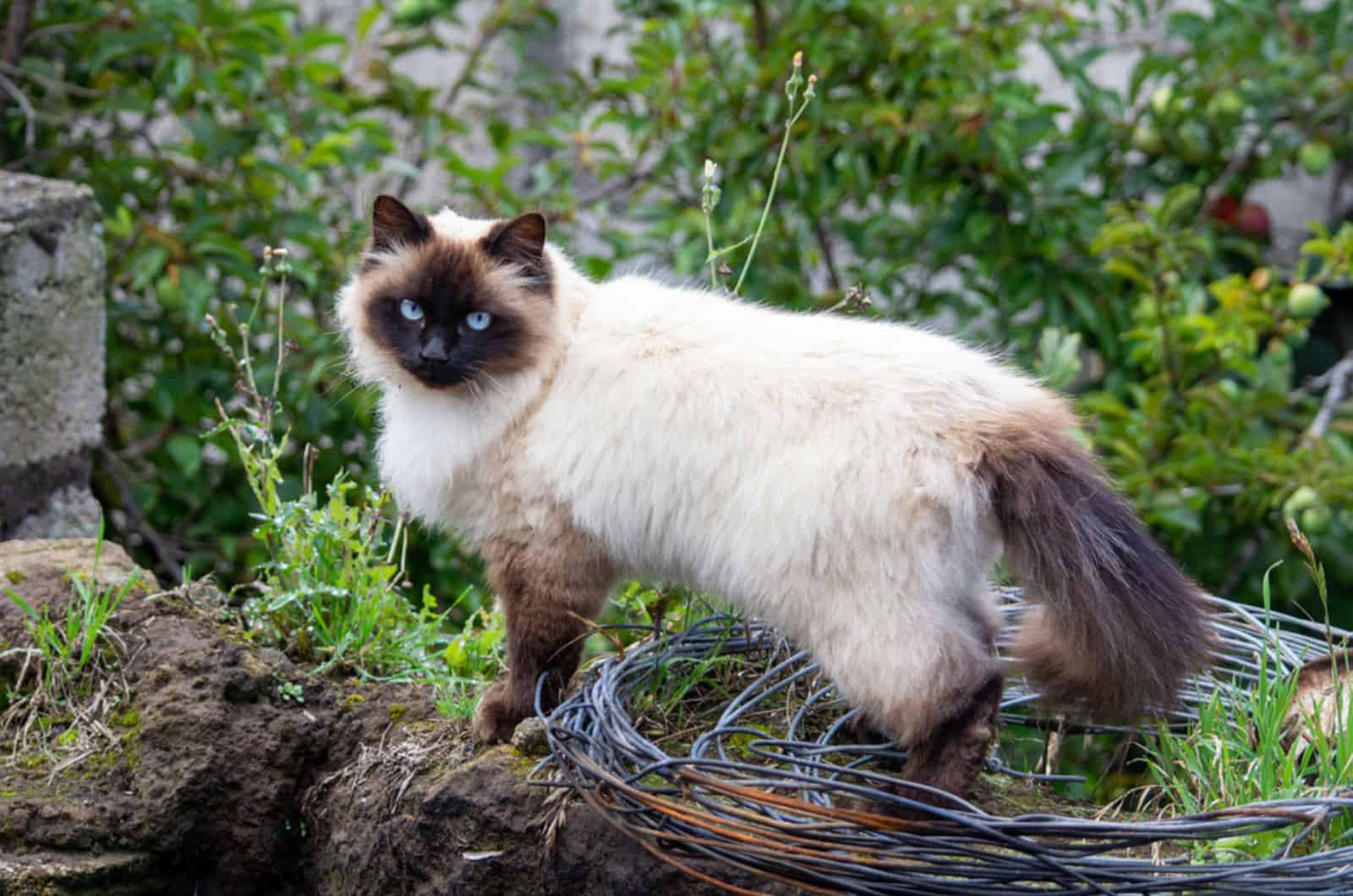 Both Siamese and Himalayan cats are slender and compact (although you can’t tell with Himalayan cats because of their fluffy fur). Both breeds typically weigh between 8 and 14 pounds.

Females are generally toward the lower end of the size range while males are typically bigger, as is the case with many cat breeds. Himalayan and Siamese cats are usually around the same weight.

Factors that influence adult weight include gender and whether the parent cats are particularly tall or short.

Himalayan and Siamese are both colorpoint breeds. This means there is darker coloration on the nose, ears, feet, and tail – known as the color point tips.

There are four colors accepted as the standard for Siamese cat points; blue, chocolate, lilac, and seal point.

Himalayan cats are most likely to have a beige color base, looking a little like Persian cats dressing up as Siamese cats for Halloween! Some people refer to them as Persian cats wearing a coat in point colors.

Some people mistake Himalayans for a Birman Siamese hybrid. They’re both long haired cats, but if you have a closer look, you will notice that the Birman Siamese cat has a more traditional Siamese appearance, whereas the Himalayan takes after its Persian parent side.

Therefore, Himalayan Siamese hybrids can inherit all sorts of colors and patterns, depending on the coat color genes carried by each parent.

Just like their parents, Himalayan Persian kittens are born white and develop speckled pigment about one month after birth. Color development can continue to develop for up to three years.

Another great thing that Himalayan cats inherit from their Siamese parent’s side is their striking blue eye color. You cannot fail to notice these incredible round eyes that look like they were painted in a sky-blue color. 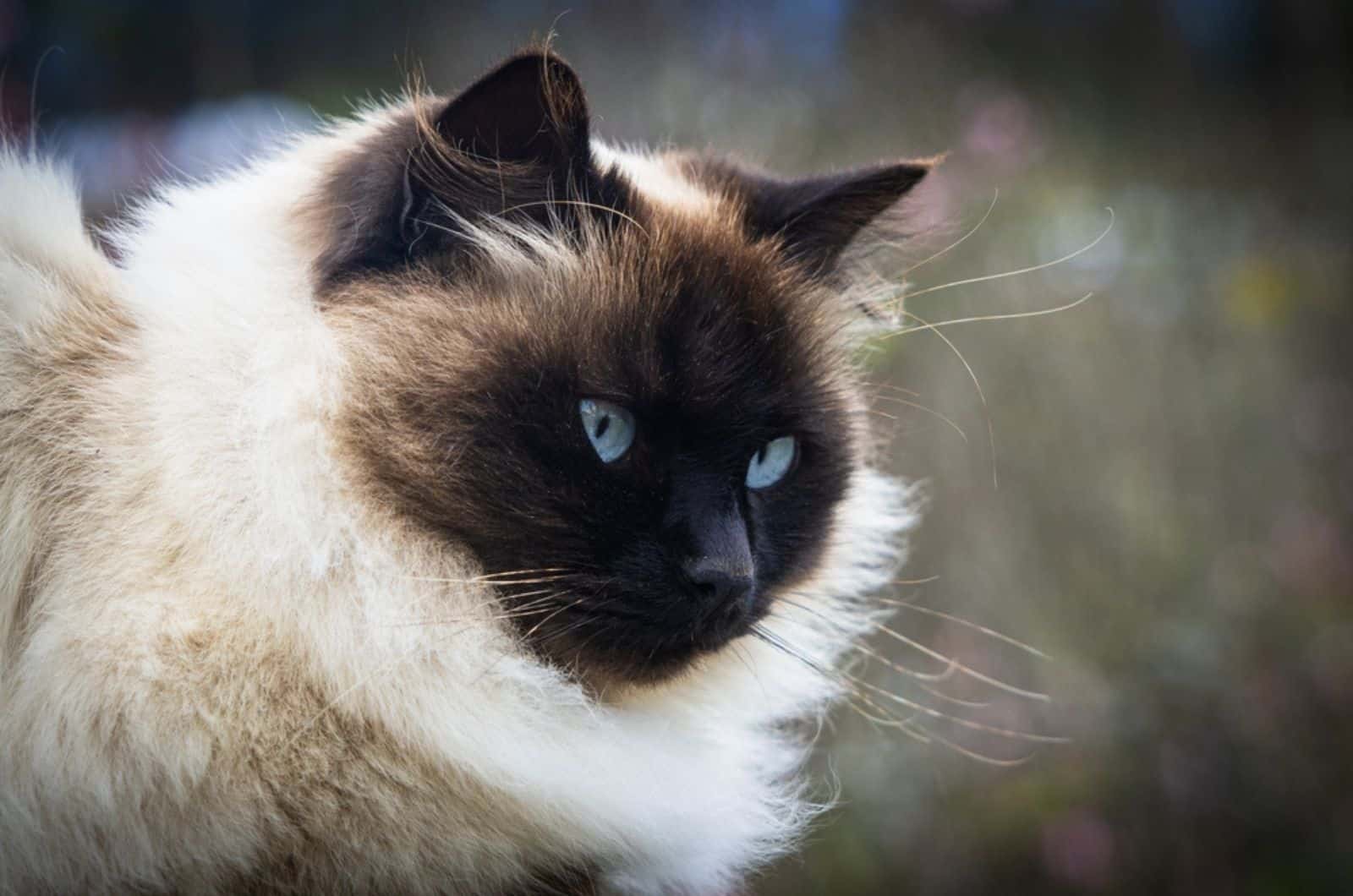 Himalayan Siamese cat hybrids are generally a healthy breed. However, they can be prone to several genetic health issues that they may inherit from their parent breeds; e.g. progressive retinal atrophy (PRA) or polycystic kidney disease (PKD).

As these conditions are quite common in Persian cats, they can also occur in Himalayan cats and later on in their babies as well.

Like all cats, this hybrid cat breed is ​​prone to lifelong acquired health problems, including obesity, parasites, upset stomach, dental issues, disease of the respiratory tract, and urinary tract infection.

If you decide to get a Himalayan kitten, you will most probably buy it from a breeder as these cats aren’t likely to be found in shelters or rescue centers.

You can ask your Himalayan cat breeder all about health screening the parent cats may have had, grooming your himmy, proper nutrition, accessing health records, etc.

Always look for reputable breeders since they take great care of their breeding cats and kittens, and you’ll get registration papers and health records for your kitten, plus, you can see the health records of the parents as well.

Most Siamese cats live between 10 and 18 years. In fact, Siamese and Persian breeds both have an average life expectancy of 16 years.

The Himalayan Siamese Cat also has an average lifespan of 16 years. However, more and more pets of all breeds are outliving the average and reaching their early twenties, as veterinary care and screening improves. 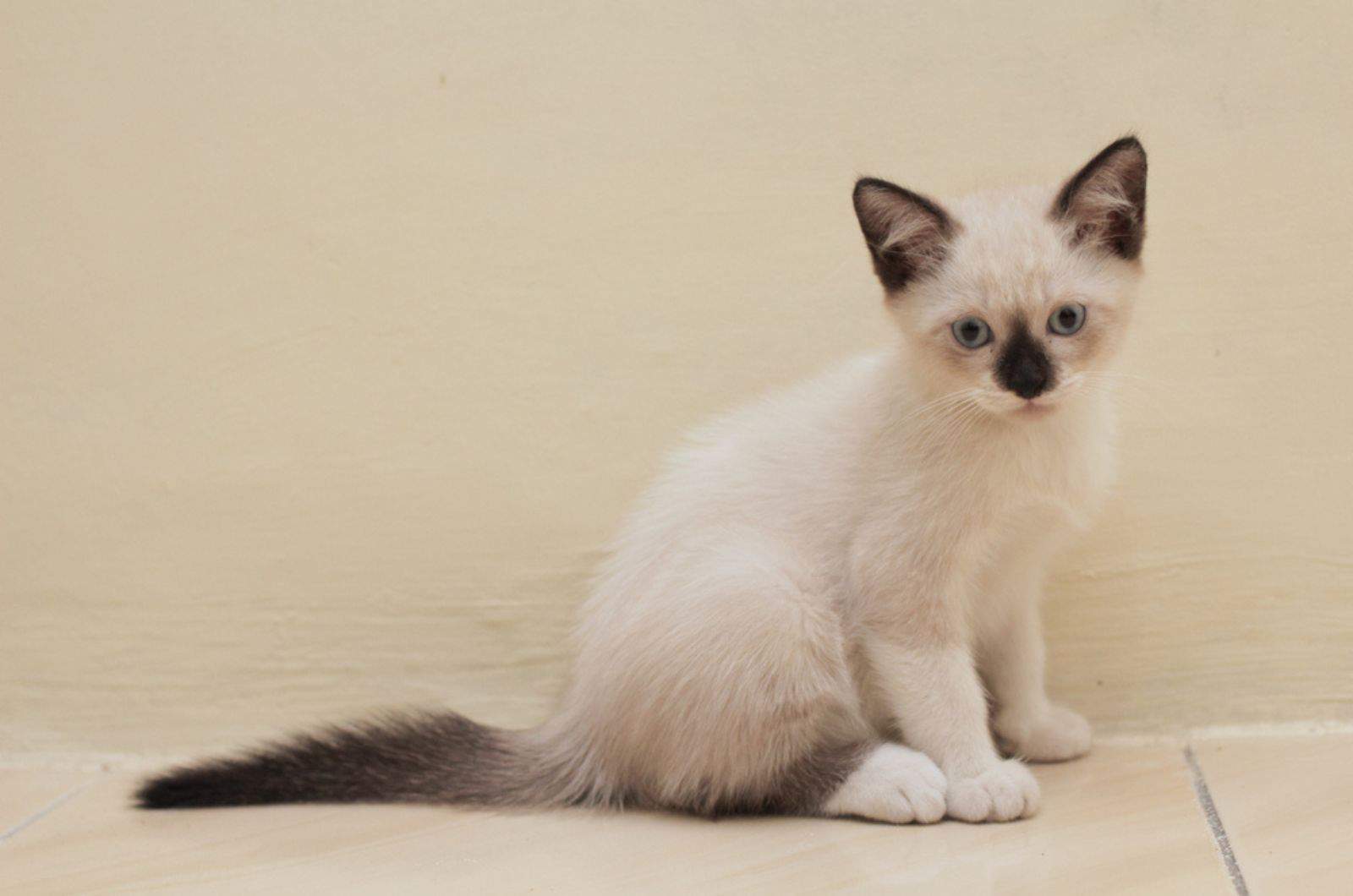 We have seen that Himalayan Siamese cat hybrids are hard to find abandoned in shelters or up for adoption in rescue centers, which is good news for the cats.

However, it means you’re probably going to have to pay a bit more for a Himalayan kitten than you would if you found a cat in a shelter. If you’re a responsible pet-owner, you’ll be willing to pay a fair price for your new cuddle buddy.

Buying from breeders is always best, as reputable and ethical breeders take great care of their breeding cats and kittens, they provide new owners with health records and are there to provide any other info you might need.

The prices are not excessively high for Himalayan kittens, there are often kittens for sale at around $1000. Depending on different breed standards and factors, you may even find one for a lower price, as low as $250.

Let’s recap! The Himalayan cat’s coat length comes from its long-haired cat parents, the Persian cats. Their coat pattern and color come from the other side, the Siamese cat parents. These cats are the cutest offspring and they make a great pet for any family.

The Himalayan breed of cat is a hybrid of two types of cats that are somewhat different in their temperament, levels of vocalness, and playfulness, which makes Himalayan kitties somewhat vocal, moderately playful, but always smart and affectionate!

What’s even better, the Himalayan Siamese cat will be vocal when he/she needs something (which makes responding to your cat’s needs even easier, once you get used to it), they’ll be playful but at the same time happy to cuddle and nap in your lap.

• Ragdoll Vs. Siamese Cats, Is Beauty Their Only Similarity?

Ragdoll Vs. Siamese Cats, Is Beauty Their Only Similarity?

Cat Breed With No Tail – The Manx Cat + Other Tailless Cats