Isn’t it adorable seeing two littermates being always together, playing around, cuddling and making all sorts of trouble together?!However, you may have wondered if it is possible for littermates to become overly attached to each other, to the point that it creates problems for both them and their owners.

This can happen; hyper-attachment between littermates is commonly known as littermate syndrome!

When talking about littermates, most of us immediately think of either cats or dogs.

So, who is more prone to having littermate syndrome: cats or dogs?

Although both kittens and puppies can form strong bonds with their littermates, one of them is more prone to developing “overly-strong” bonds that actually interfere with their ability to develop proper social skills.

If you want to know if I’m talking about cats or dogs – read on to find out! 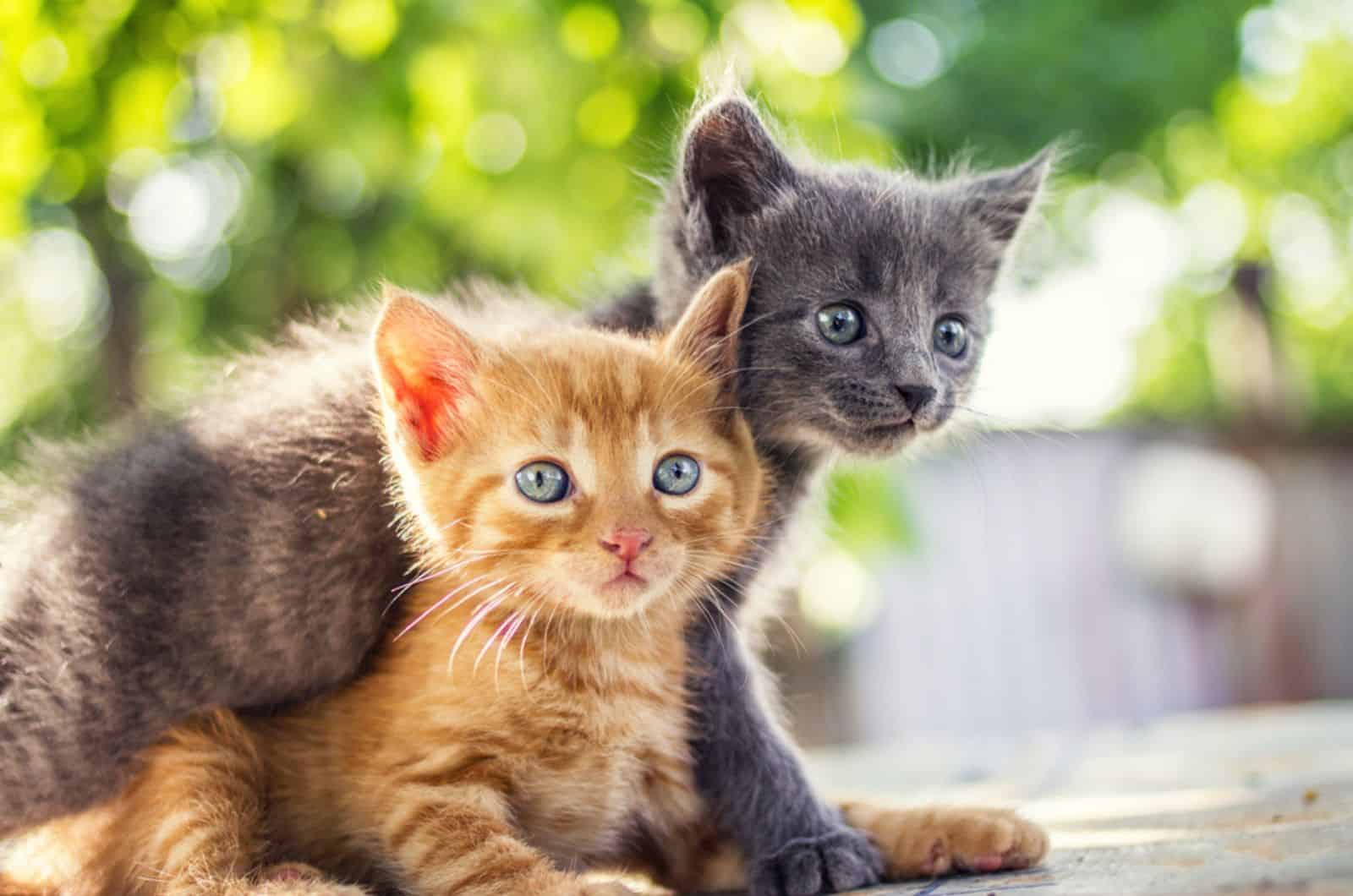 As we will discover, littermate syndrome causes a lot of issues for pets and their owners.

However, in order to understand why that’s the case, let’s first understand what exactly littermate syndrome is, what are its symptoms and consequences, as well as why cats are not prone to develop it, while dogs are.

What Exactly Is Littermate Syndrome?

In a case of littermate syndrome, the littermates are often so involved in interacting with one another, that they forget the world around them exists. This can reach a point where they don’t respond to their owners’ voices or commands, which makes for very disobedient, unruly pets.

Littermate syndrome is a term that describes the behavioral issue of littermates that become overly-attached to each other, to the point that they cannot function normally without each other.

It is possible for littermates to develop such a strong emotional bond that even brief separations can be quite upsetting. When littermates are separated, they often experience great anxiety, which can even result in destructive behavior.

Socialization is a huge part of an animal’s development; it helps them form social bonds and learn valuable social and communication skills.

On the contrary, animals that don’t develop these skills in early life will likely suffer in their adulthood as a result.

Is Littermate Syndrome A Myth? 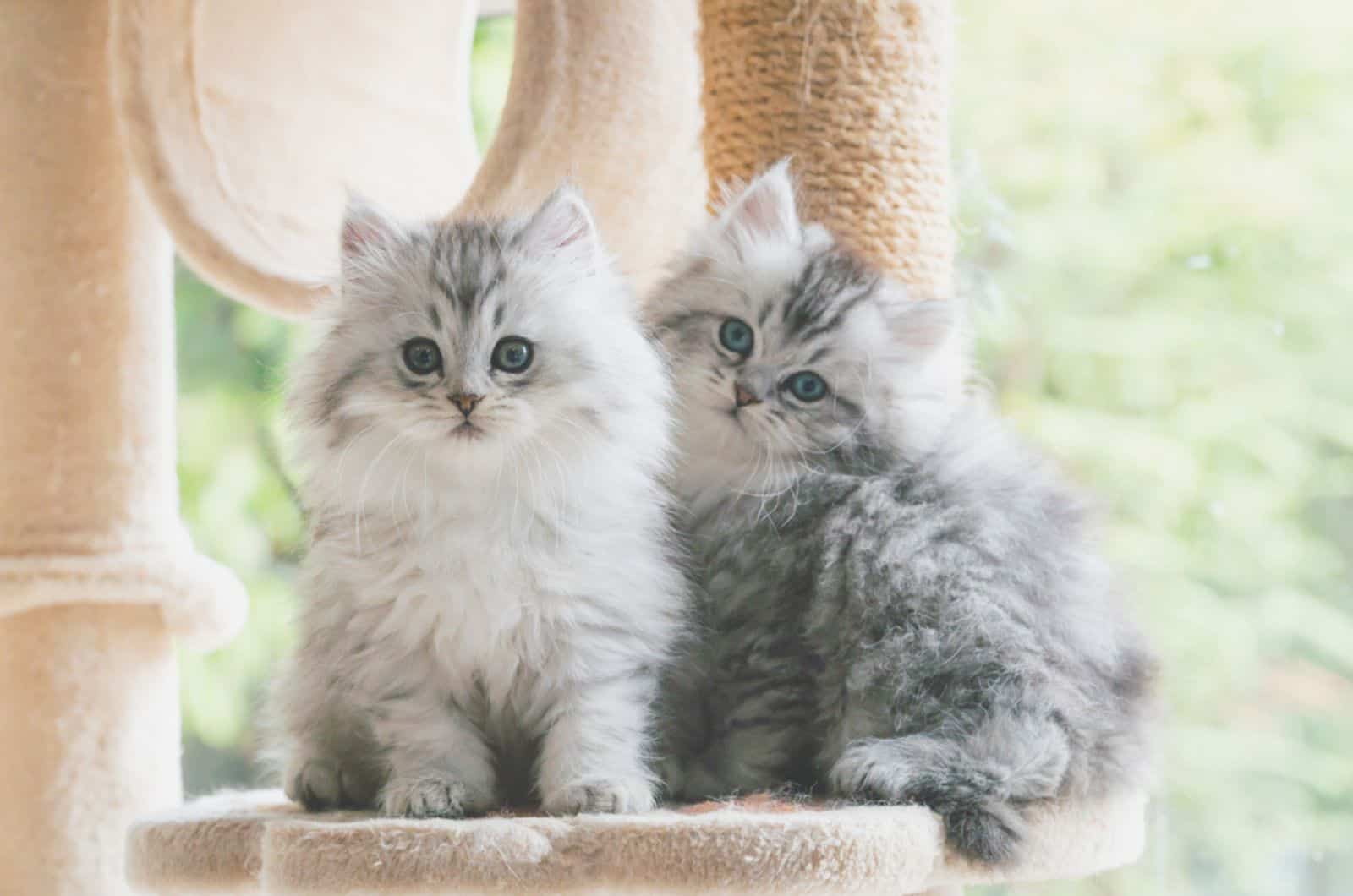 I must mention that this syndrome has no actual scientific research and evidence to back up its existence. In fact, its existence and symptoms have only been described using anecdotal evidence.

Nevertheless, lack of scientific studies does not mean it does not exist – maybe there is simply no research being done on this topic!

Many pet owners and breeders can confirm that littermate syndrome is very real!

At the end of the day, it’s up to you to decide whether to believe (or not) in the validity of information regarding littermate syndrome.

What Are The Signs Of Littermate Syndrome?

There are many signs of littermate syndrome, and they are usually observed early on, when the pet is still just a kitten or a puppy. However, if not managed on time, the symptoms will persevere into adulthood.

The symptoms of the littermate syndrome include the following:

🐾 Eating too much when separated

🐾 Not eating at all when separated

🐾 Urinating and defecating in improper places

🐾 Destructive behavior (such as destroying the furniture or carpets)

🐾 Trying to escape the home or garden

🐾 Excessive excitement when seeing each other

🐾 Failing to interact with people or other pets

🐾 Being afraid of people and other pets

🐾 Having trouble being obedient

🐾 Owners not being able to train them

🐾 Not paying attention to their owners

🐾 Not paying attention to other pets around them

🐾 Being aggressive to the rest of the litter or other pets

What Are The Consequences Of Littermate Syndrome? 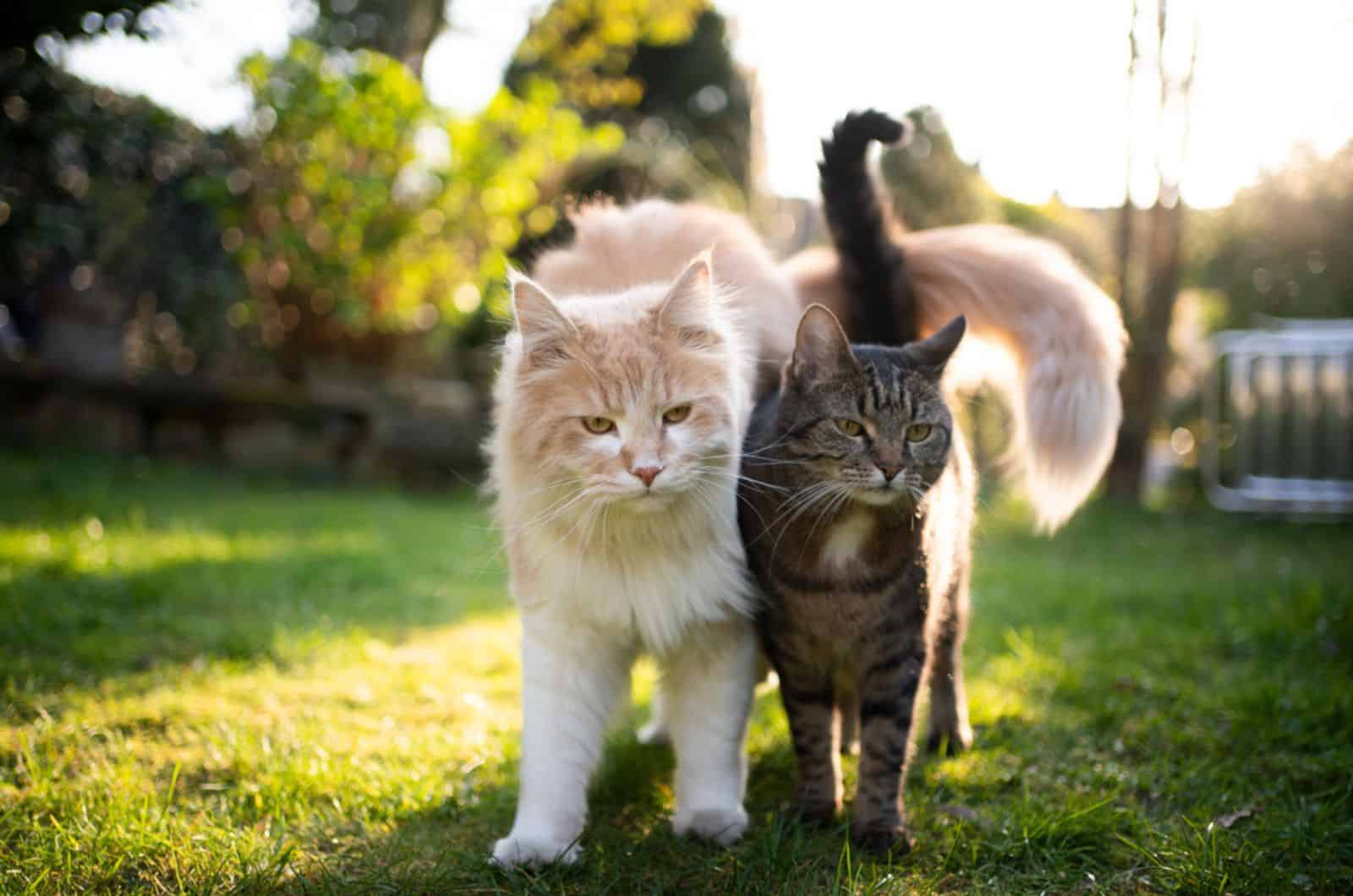 When pets develop littermate syndrome and their owners or breeders do nothing about it, it’s more than possible that the pets will experience consequences in their adulthood.

Pets with littermate syndrome often have:

None of these issues should be taken lightly; a pet with these issues is not a perfectly happy pet, therefore time should be devoted to helping them before they grow up.

Can You Reduce Littermate Syndrome Symptoms?

Yes, littermate syndrome symptoms can be reduced! It is highly recommended that the pet owner or breeder act to deal with this issue as soon as the first symptoms arise.

In order to reduce the symptoms of littermate syndrome, it is recommended to slowly start separating the two buddies for brief periods of time, and then gradually increase the time spent apart. This allows them to slowly adapt to not being constantly together.

If the owner or breeder cannot deal with the issue alone, it’s a good idea to consult a pet behaviorist to help with reducing the symptoms of littermate syndrome. They will be trained in this area and will offer you their professional opinion, advice, and skills.

In some extreme cases, it may even be recommended to rehome one pet from the pair. Of course, this is much easier said than done, but sometimes it’s the best option to create happy, healthy pets.

I know it is not an easy road and littermate syndrome cannot be “fixed” in a day or two, but every pet parent wants nothing but happiness and wellness for their beloved pets, so taking care of their needs should always be a priority. 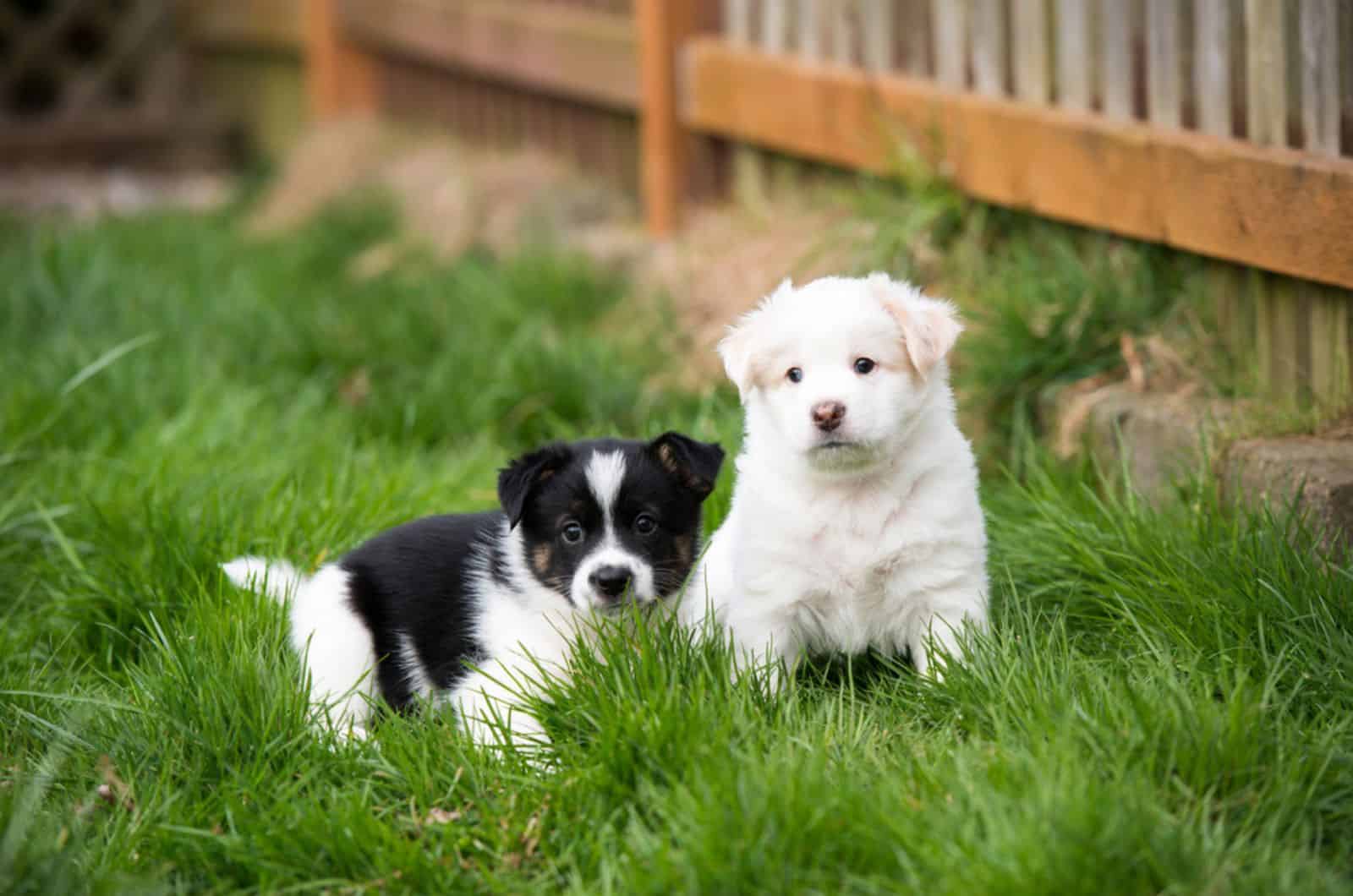 Now you know all about littermate syndrome.

If you know a little bit about the behavior and personality of cats and dogs, you might not expect cats to develop littermate syndrome!

This is a fairly natural conclusion to come to, after all, cats are much more independent than dogs!

(The Lack Of) Littermate Syndrome In Cats

What Is The Nature Of Cats?

In order to fully understand the nature of cats, we have to look at the ancestors from whom they were domesticated – the wild cats.

Wild cats are solitary creatures that don’t need to rely on anyone. They hunt alone as this brings the best results because they rely on stalking, hiding and being very quiet when hunting. Imagine hunting like that with five other cats… it would not be a successful hunt!

Although cats are able to form social groups, at the end of the day, they hunt better when they’re alone because it means a better chance of survival. This is why it’s not in a cat’s nature to be dependent on anyone.

Even though cats have been domesticated for a long time, some of their wild traits still remain with them today, including being largely independent.

Although cats can and do form strong social bonds, this does not often turn into hyper-attachment; they are not prone to becoming dependent on anyone – not even a littermate. 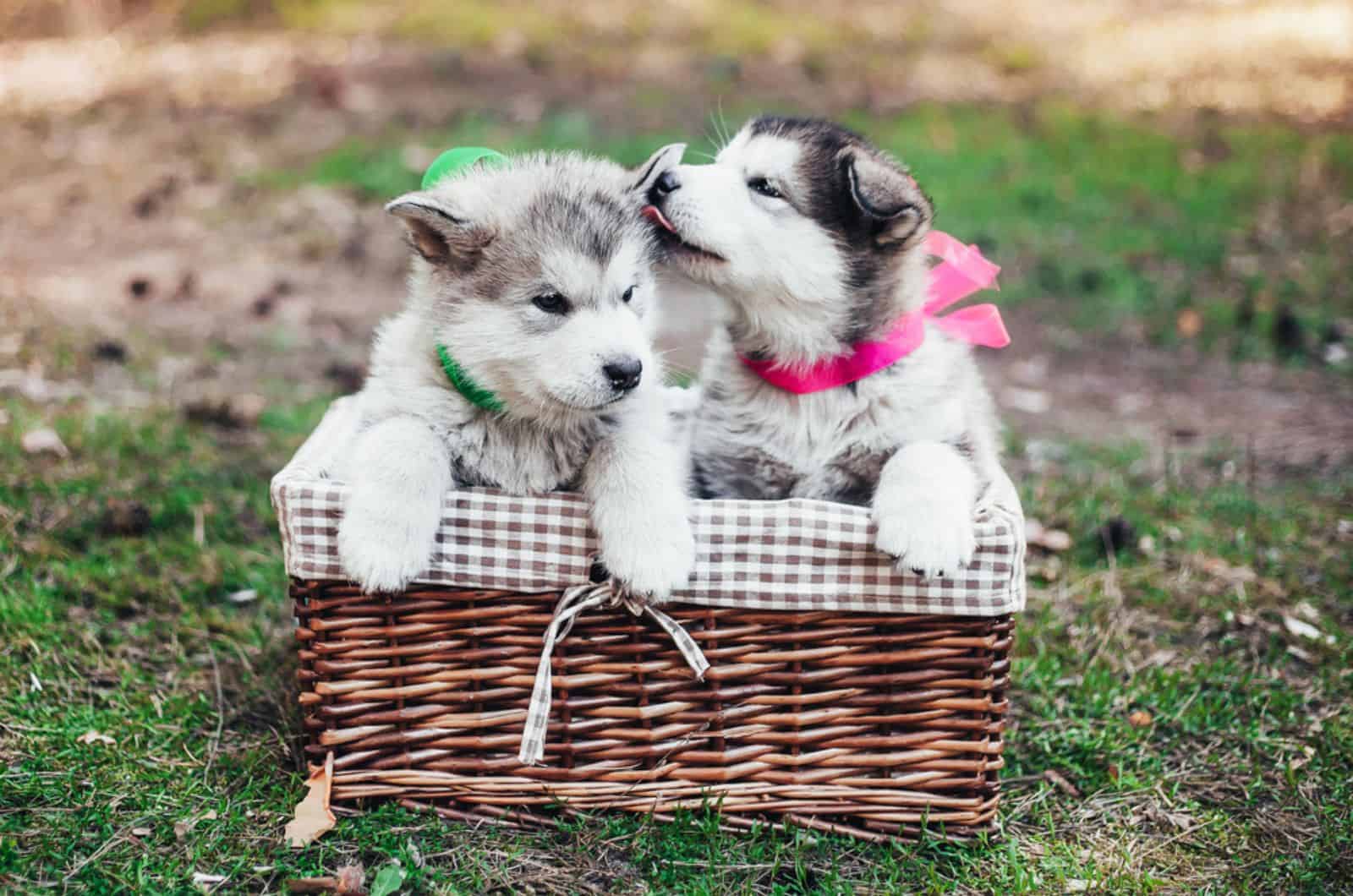 Although it might seem great that two puppies are inseparable friends and playmates – that is definitely not always the case.

It’s bad for puppies to get overly bonded and spend all of their time together, including when they eat, play, and cuddle. As explained earlier in this article, it can lead to bad behavior and lack of social skills.

You probably already know that dogs are known for liking (and needing) social interaction, which can translate into them being overly-attached to a littermate, but also to their owner and other family members.

Many dog owners will tell you their dog is very attached to them and needs their presence and attention daily. The same thing can happen with a littermate.

Sibling puppies that have developed hyper-attachment should be gradually separated from one another in order to learn how to socialize and behave normally as adults.

Although cats are largely independent, that does not mean they will not interact with their littermates. In fact – cats absolutely love interacting with one another, but they simply don’t develop codependency in the way that dogs do.

Now, let’s briefly answer some commonly asked questions that can help you understand cat behavior and personality better, as all of this information can be a bit confusing.

Do Sibling Cats Get Along? 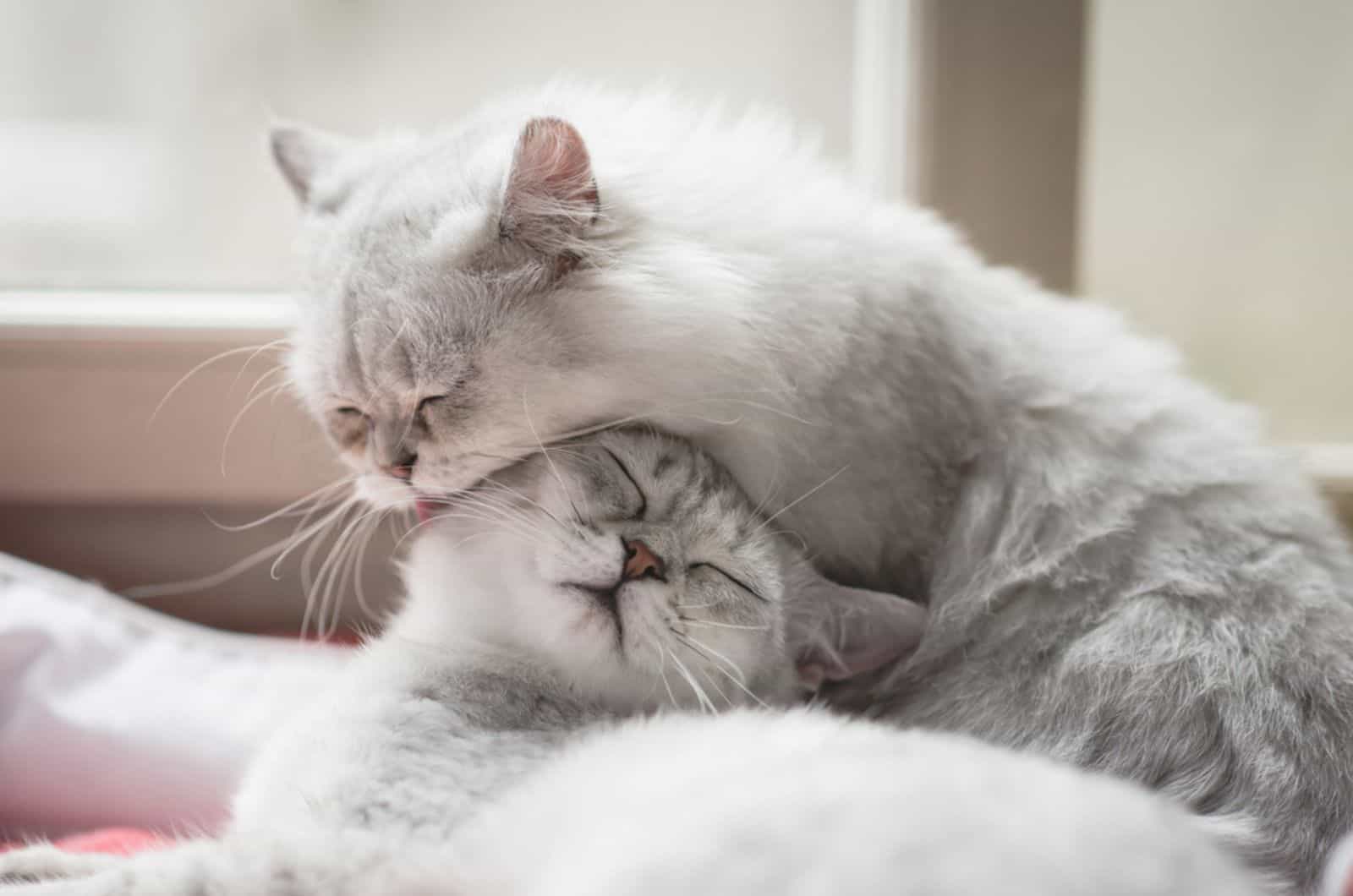 It is also possible for cats to get along sometimes and not other times! In the cat world – everything is possible when it comes to the relationship between two cats!

Can Sibling Cats Live Together?

The answer here depends on how well they get along.

Do Kittens Miss Their Mom And Siblings?

It is possible for cats to miss their mom and littermates after they’ve been separated from one another. This may be displayed as symptoms of separation anxiety as they have trouble adjusting to a new environment.

However, cats do adjust to a new home and a new family relatively quickly, and they do stop missing their mom and siblings.

Do Cats Remember Their Littermates?

It is possible for young cats to remember their littermates if they were just recently separated from each other. After some time passes, the littermates will most likely not recognize one another.

Is Separating Kittens From Their Siblings Okay? 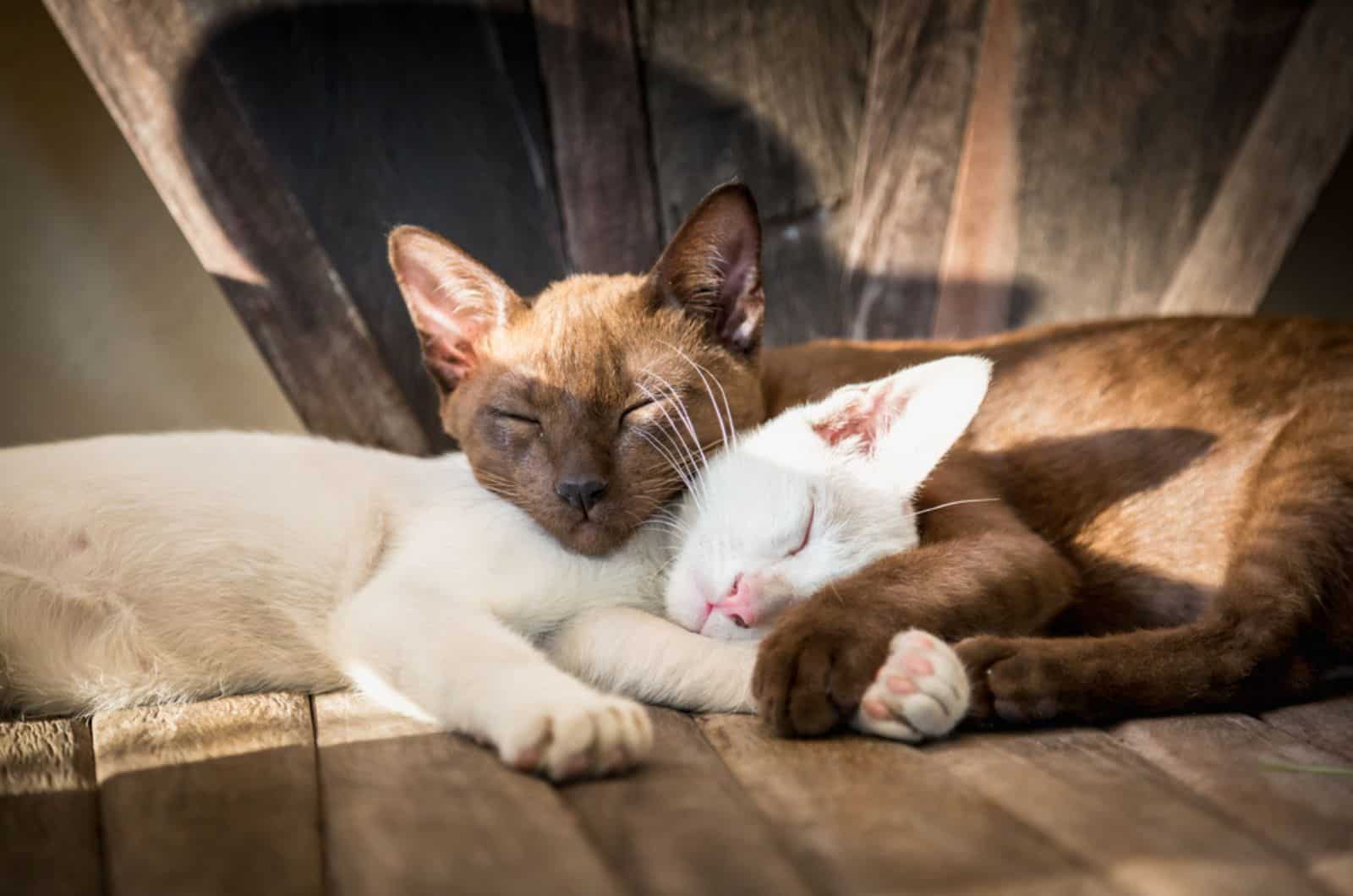 Yes, separating two kittens from the same litter is perfectly fine. Cats don’t create such intense bonds between each other, therefore they handle separation very well.

At the end of the day, the separation of kittens from the same litter has to be done for practical reasons. Not many cat owners are willing to adopt an entire litter!

Should I Get Two Kittens From The Same Litter?

It can be good to get two kittens from the same litter simply because they will have one another to play with, pounce on, and snuggle up with so they will never be bored. It’s simply a matter of practicality.

I would recommend getting a pair of littermates if you are considering getting two new kittens as pets.

Littermate syndrome is not as commonly talked about in the cat world as it is in the dog world, because dogs are more likely to be affected by this issue than cats. In fact, I’ve never heard a cat owner complain that their kitties have littermate syndrome.

Cats are not prone to developing littermate syndrome as it is not in their nature to become overly-attached to anyone – they are very independent creatures! Forming hyper-attachment to a littermate is far more common for puppies, and a number of dog owners struggle with it.

If you are worried about your kittens developing the littermate syndrome – don’t be! The probability of that happening is very low.

Now you know all about littermate syndrome: cats vs dogs. I hope you liked getting to the bottom of this subject and have learned something new!

• Do Cats Forget Their Owners? Here’s The Answer!

• What Do Cats Think About? Let’s Solve The Mystery!

• The 15 Best And 22 Worst Dog Breeds For Cat Households

Single Kitten Syndrome - Why Two Kittens Are Better Than One

[…] Suggested: Who Is More Prone To Littermate Syndrome: Cats Or Dogs […]