There is simply something so special about cute little domestic cats that have the pattern of a wild cat. Having little wild-looking feline friends as cuddle buddies is both unusual and adorable!

Some cat owners prefer their pet cats to look like cute stuffed toys so they love cats like the Munchkin, while others love the idea of having a mini version of a tiger running around their home, and so they love the Toyger cat breed.

When talking about domestic cat breeds that look like leopards, Savannah cats are the first ones that come to mind for people who know about cat breeds.

However, there are actually other cats that have coat patterns which resemble the beautiful coat patterns of a leopard, and an Asian leopard cat.

The Savannah cat was created by mixing African Servals in the breeding process, and that is where its unique leopard-looking coat pattern comes from. Let’s see how these other 10 beautiful cat breeds got their wonderful wild looks… 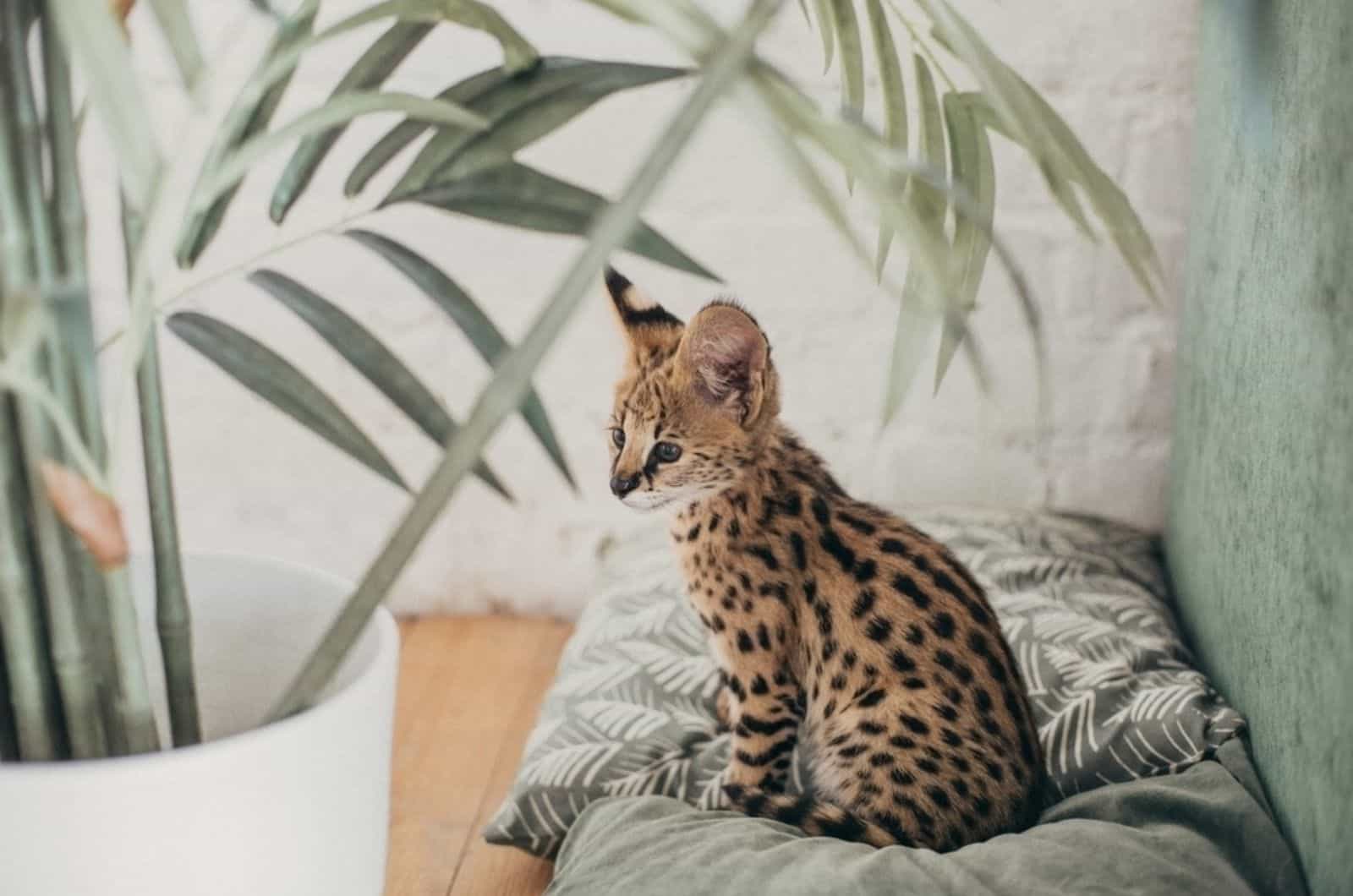 The Savannah cat was first bred in 1986. It is a crossbreed of the domestic cat and the African wild cat, i.e. Serval. The breed’s name is the same as the name of the first kitten of this breed.

Savannahs are tall, elegant, powerful-looking cats with long legs. They love to spend time up in the trees as well as on the ground. They are one of a limited number of cat breeds that enjoy being in the water.

As a pet, the Savannah cat can be very affectionate and incredibly loyal. Savannah cats are very intelligent, and they love to play.

They are easy to maintain with minimal grooming requirements and are usually friendly with people and other cats, dogs, and pets within the home. Their love of water means that you will need to watch them around your toilet, pond, bath, or shower!

There are several domestic house cats that, due to their coat pattern or color markings, resemble jungle cats like tigers or have a similar appearance to a wild breed of cat such as a lynx, bobcat, or cheetah. 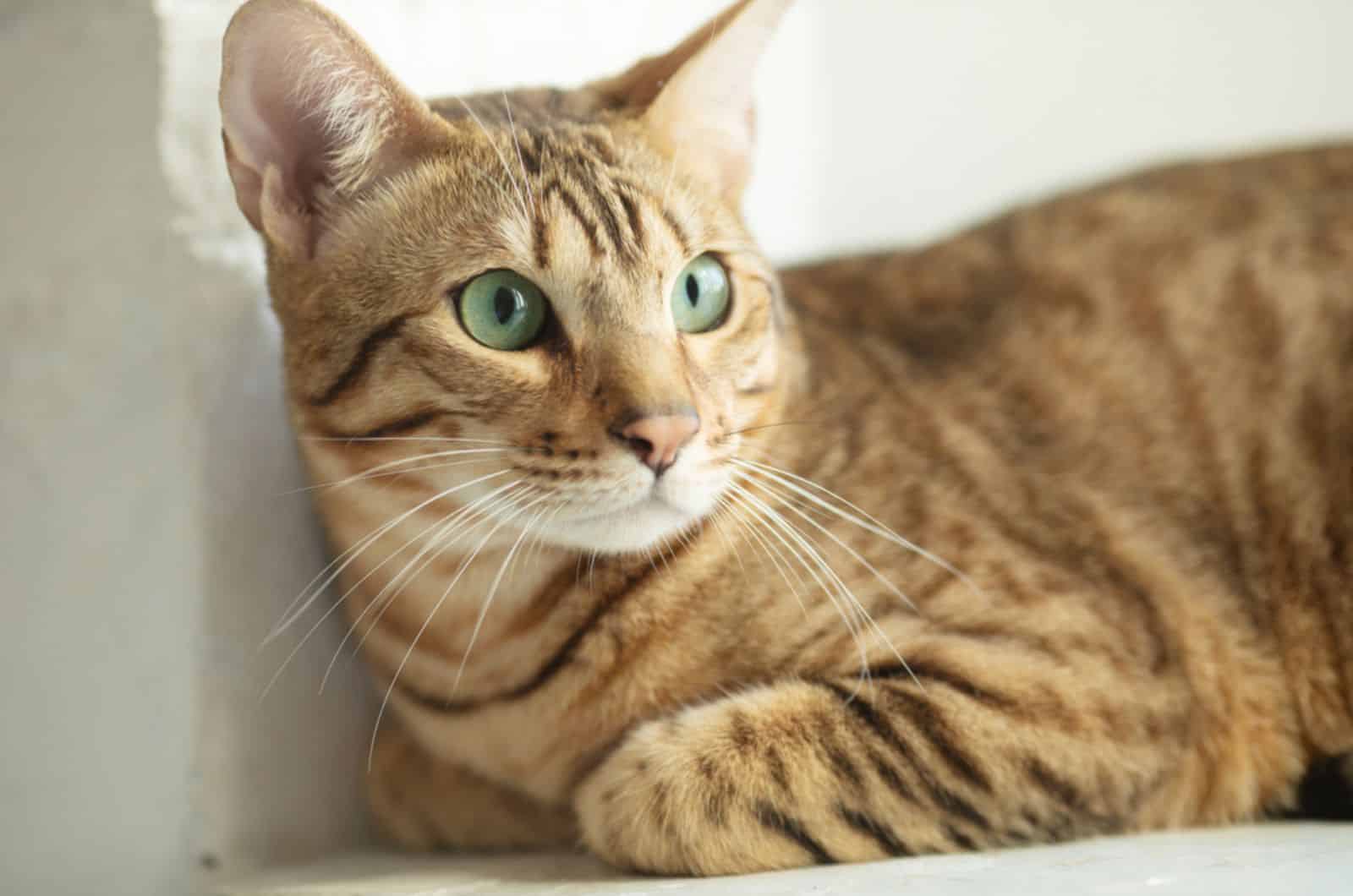 The Serengeti cat is a hybrid between the Bengal Shorthair and the Oriental Shorthair. The breed was developed in the 1980s by conservationist Karne Sausman who created this wildcat-like domestic cat breed.

The breed is not yet recognized by cat associations, but breeding programs and breed examples are known to exist around the world.

The Serengeti is a very friendly domestic cat. It is shy at first, but as it gains confidence, it becomes a very playful, energetic, and active feline.

Serengeti cats get along well with all family members and will happily spend time with you. Your Serengeti will talk a lot, so be prepared for frequent conversations! 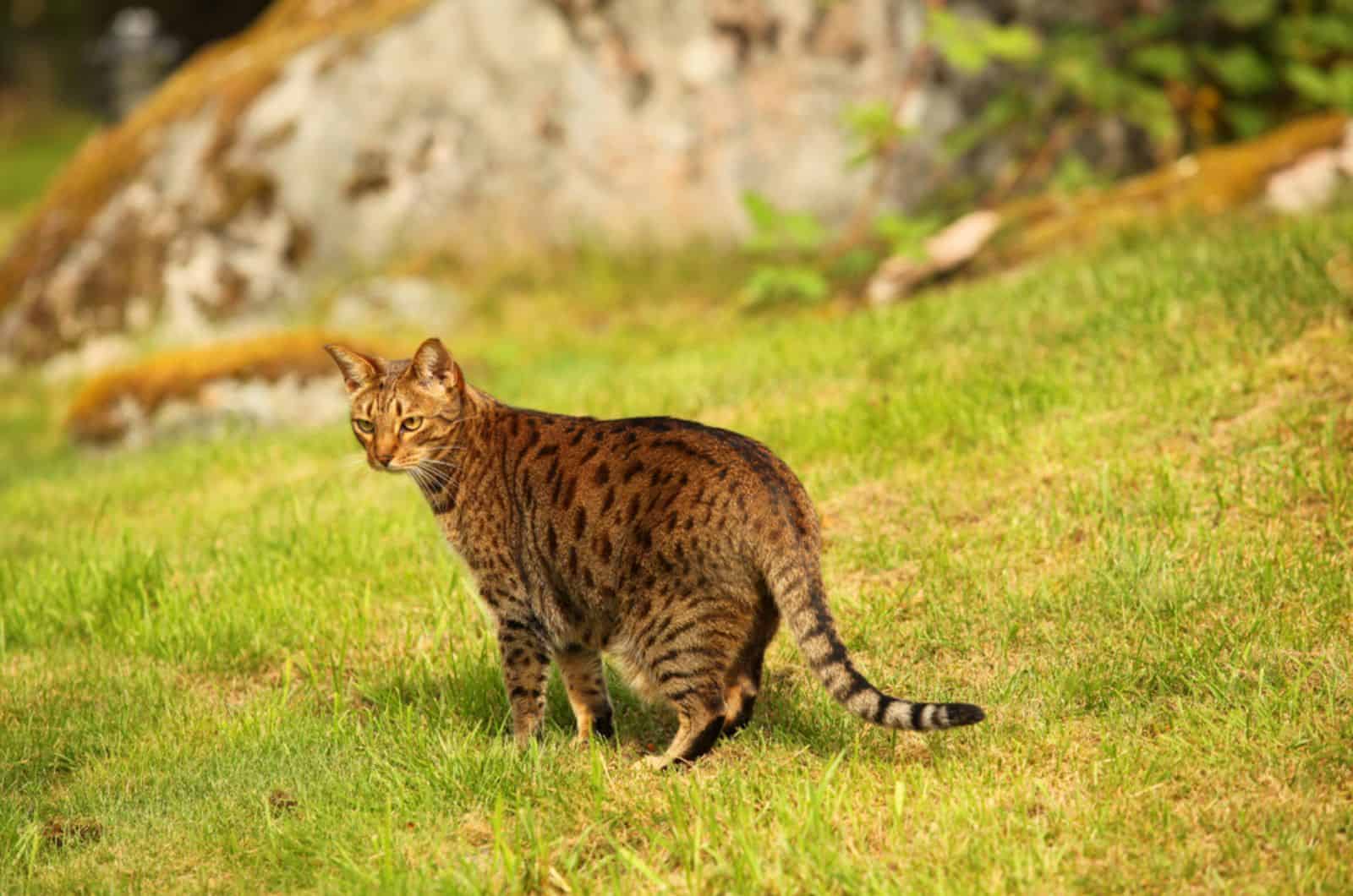 The Ocicat is a cross between American Shorthair, Abyssinian, and Siamese cats. The only thing this cat species gets from wild ocelots is the name!

The breed was created by chance in the 1960s by breeder Virginia Daly. However, once the attractive markings were noted, they were deliberately bred. This breed has been recognized since 1987.

As pets, Ocicats are extremely affectionate and loyal. They form very close bonds and commonly follow their favorite humans around the home. They also get along well with visitors, children, cats, and even dogs.

This breed does not like to be left alone and can be considered quite demanding due to its need for company. Other than that, Ocicats make great pets. 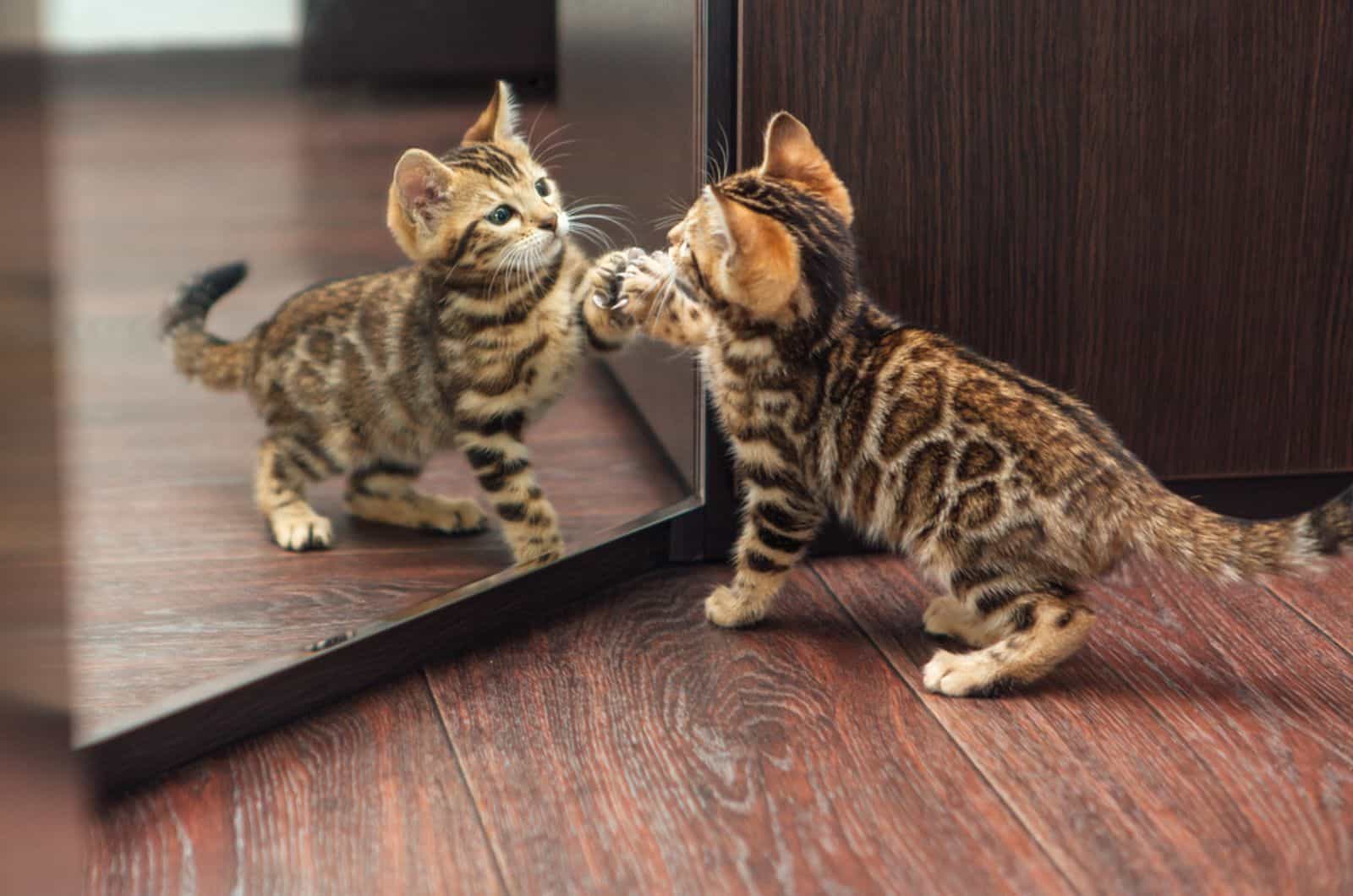 The Bengal is another hybrid cat. It is actually a very affectionate domestic cat, despite looking like a ferocious leopard. It was first bred in the 1960s by combining an Asian leopard cat with a native shorthair breed.

The breed has been fully recognized by TICA since 1983. The Bengal’s dense coat is typically spotted or marbled.

This breed is very energetic and strong, so it needs a lot of exercise. Owners often find that they stay active through interactive play and exercise with their Bengal kitty!

Bengals are one of the few cat breeds that like to spend time in the water, so you’ll need to supervise them around any pools, ponds, and other water sources they might encounter. 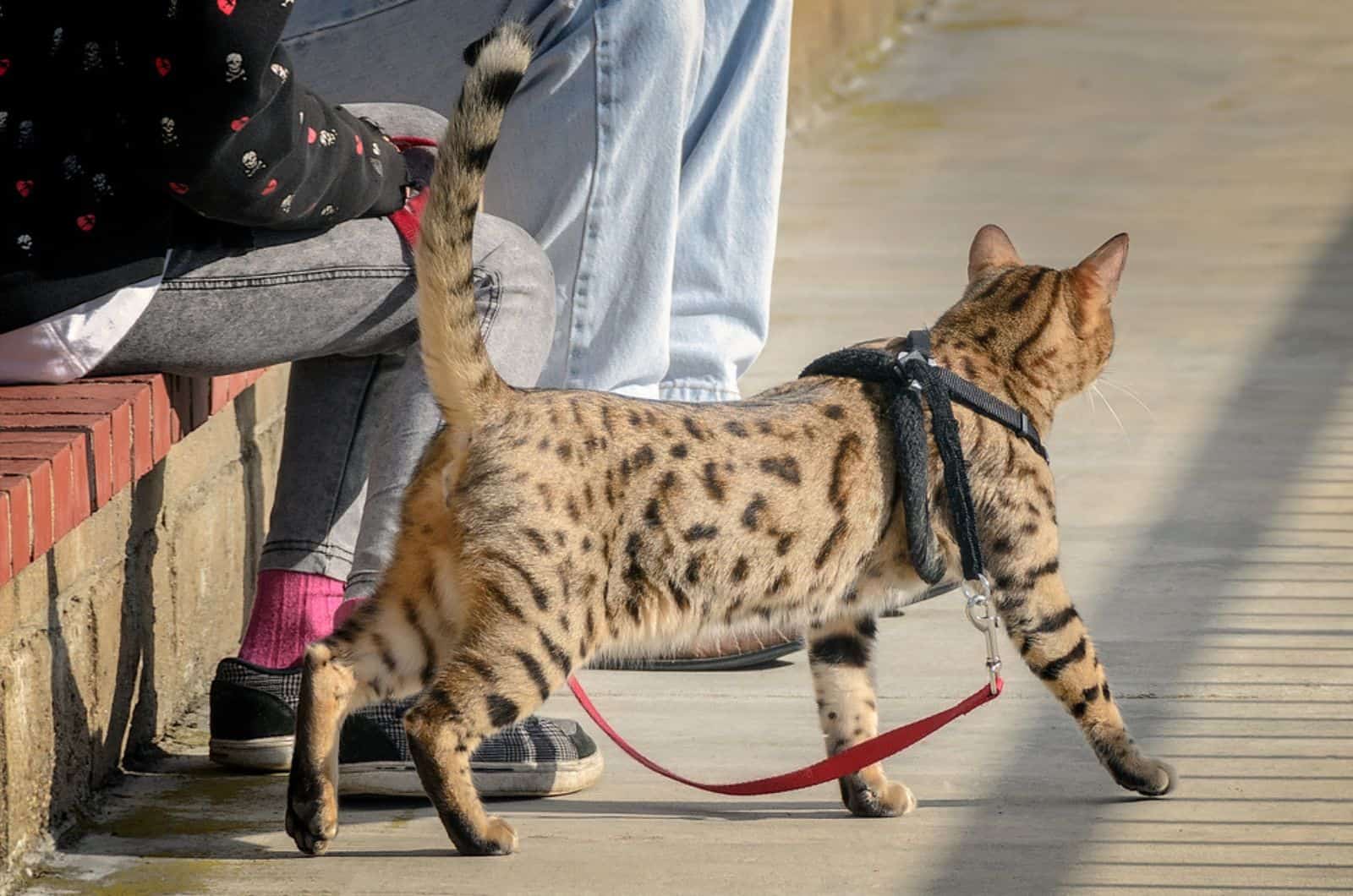 Cheetohs were created by crossing Ocicats and Bengal cats, so it’s no surprise that this breed has a pretty wild appearance. The Cheetoh is a fairly new breed that was intentionally created in 2001, which is one reason why it remains a difficult breed to find.

As they tend to be very big cats, Cheetohs look ferocious, but they love to run, jump, and play in any room of the house. This breed is talkative and makes a good companion.

Cheetohs also like to curl up and sleep on top of their favorite owners when it suits them! They can be very affectionate, sweet, and good-natured. 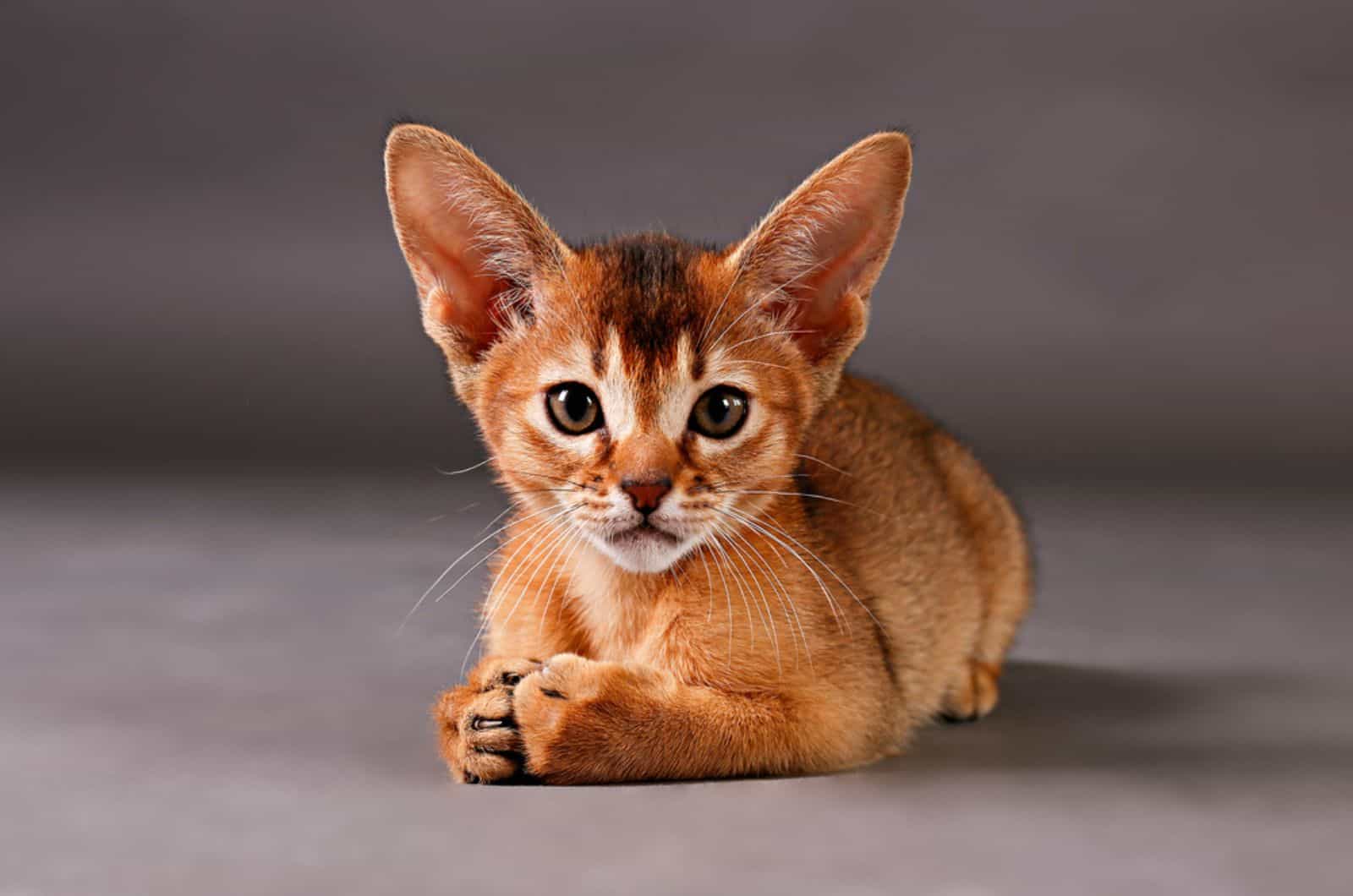 The exact origin of the Abyssinian cat is unknown, but the earliest recorded entry dates back to the 1871 Crystal Palace Cat Show.

Today, this breed is known for its love of heights! You are just as likely to find an Abyssinian perched on top of your closet or kitchen unit as you are to find it curled up on the carpet

This breed is very energetic; it loves to play, and it adores the attention of family members. It can, however, be a bit shy with strangers.

See also: 17 Orange Cat Breeds And Interesting Facts About Them 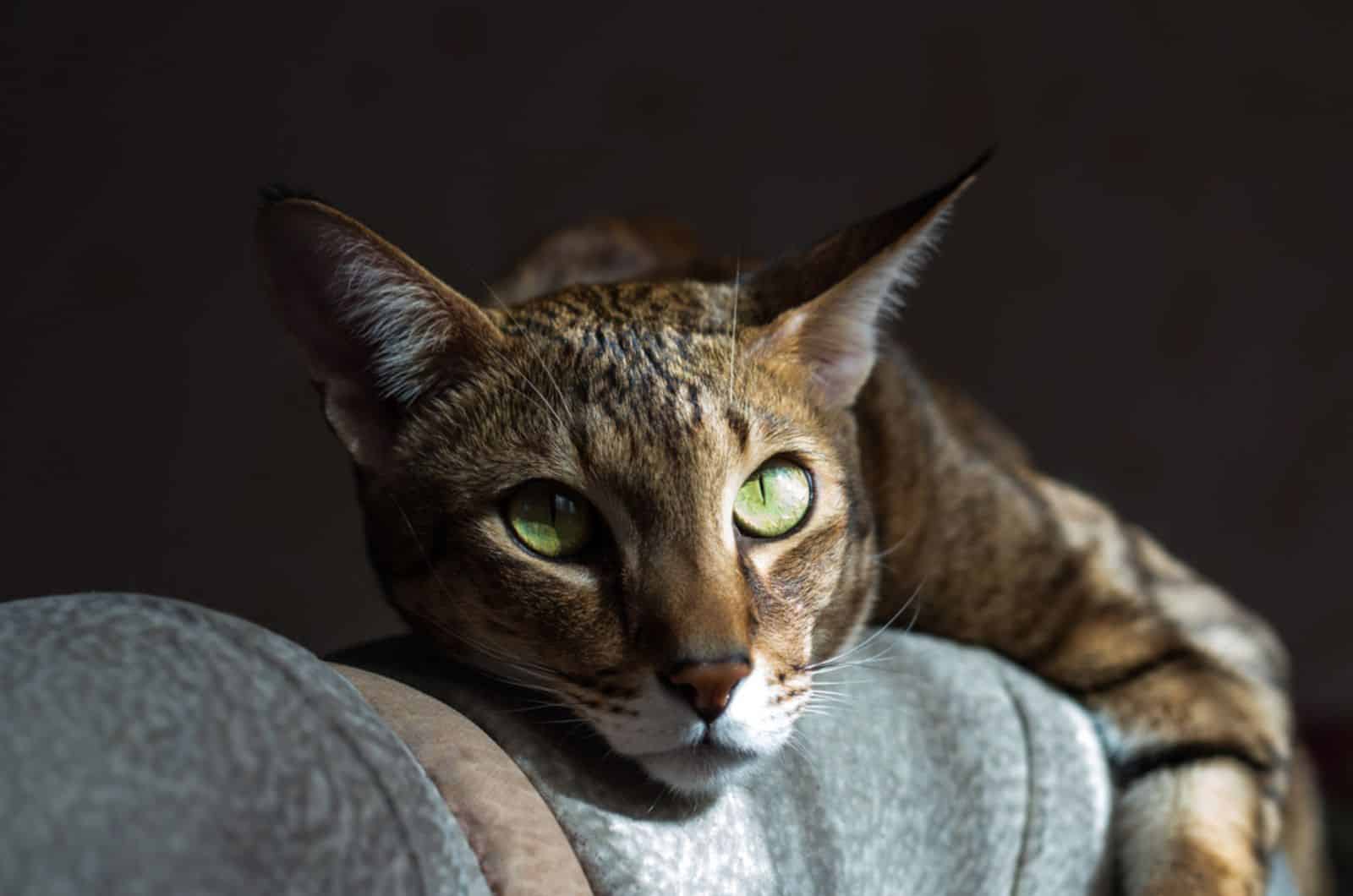 This is a very large breed. Some Chausie cats can reach a weight of 30 lbs (!), but the average weight is 19 lbs.

It is important to note that first-generation males are usually infertile. Potential owners should also be aware that having a wild strain has its own set of challenges and only 4th or 5th generations are suitable for pets and shows. 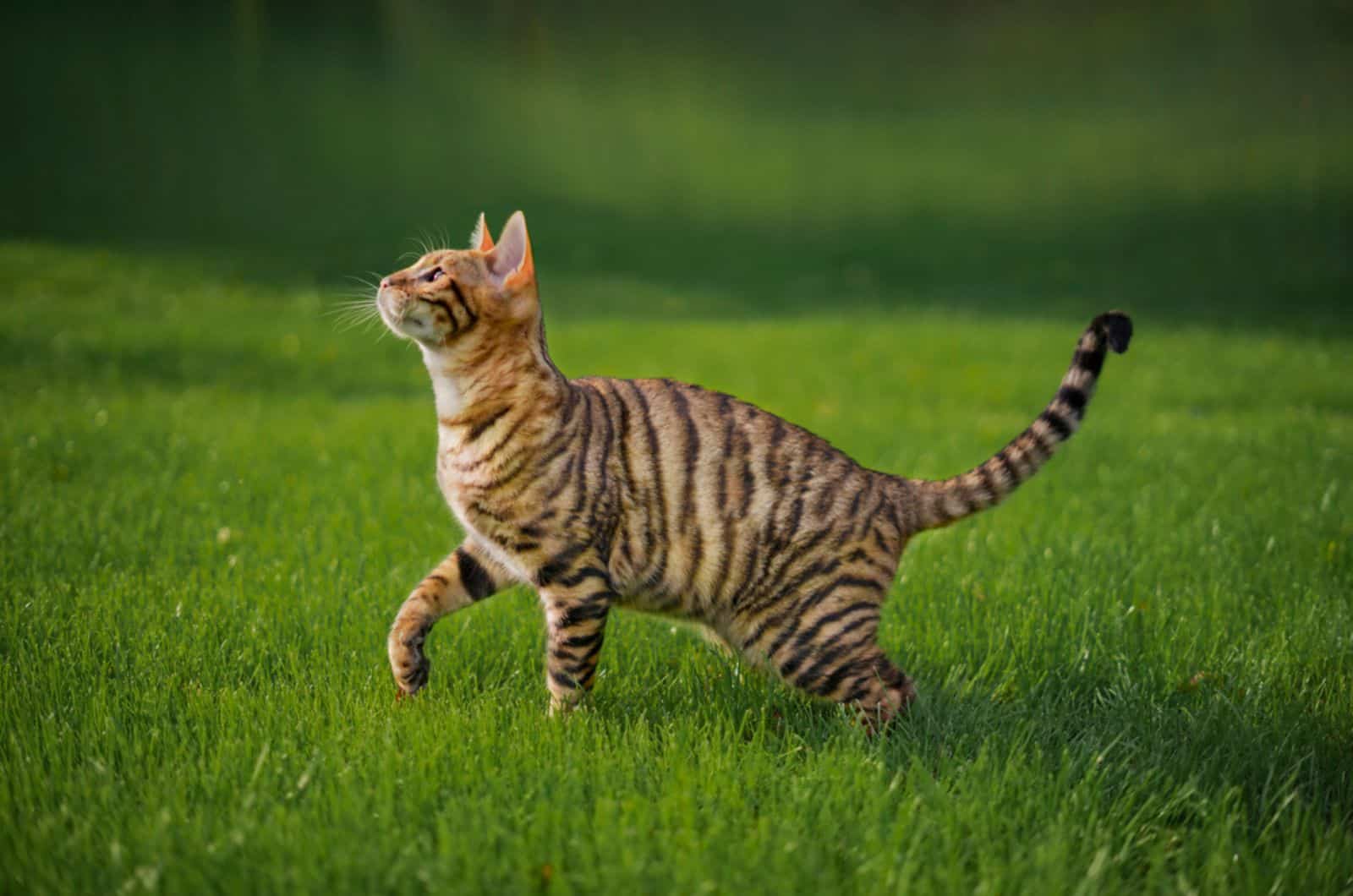 The breed was first developed in the 1980s by breeder Judy Sugden and was created by deliberately breeding the Bengal cat with striped domestic shorthairs.

The goal was to create a breed that looked like a wild cat but which had the traits and characteristics of a domestic cat, which was a success.

Like many breeds on this list, Toygers are very affectionate and form strong bonds with all family members, including cats, dogs, and other pets. This breed is very active and needs regular exercise, and it can get lonely if left alone for too long.

Toygers are an intelligent cat breed and can be trained to fetch, which is a trait that many people adore; hardly surprising, I mean, how cute is it to play fetch with a kitty?! 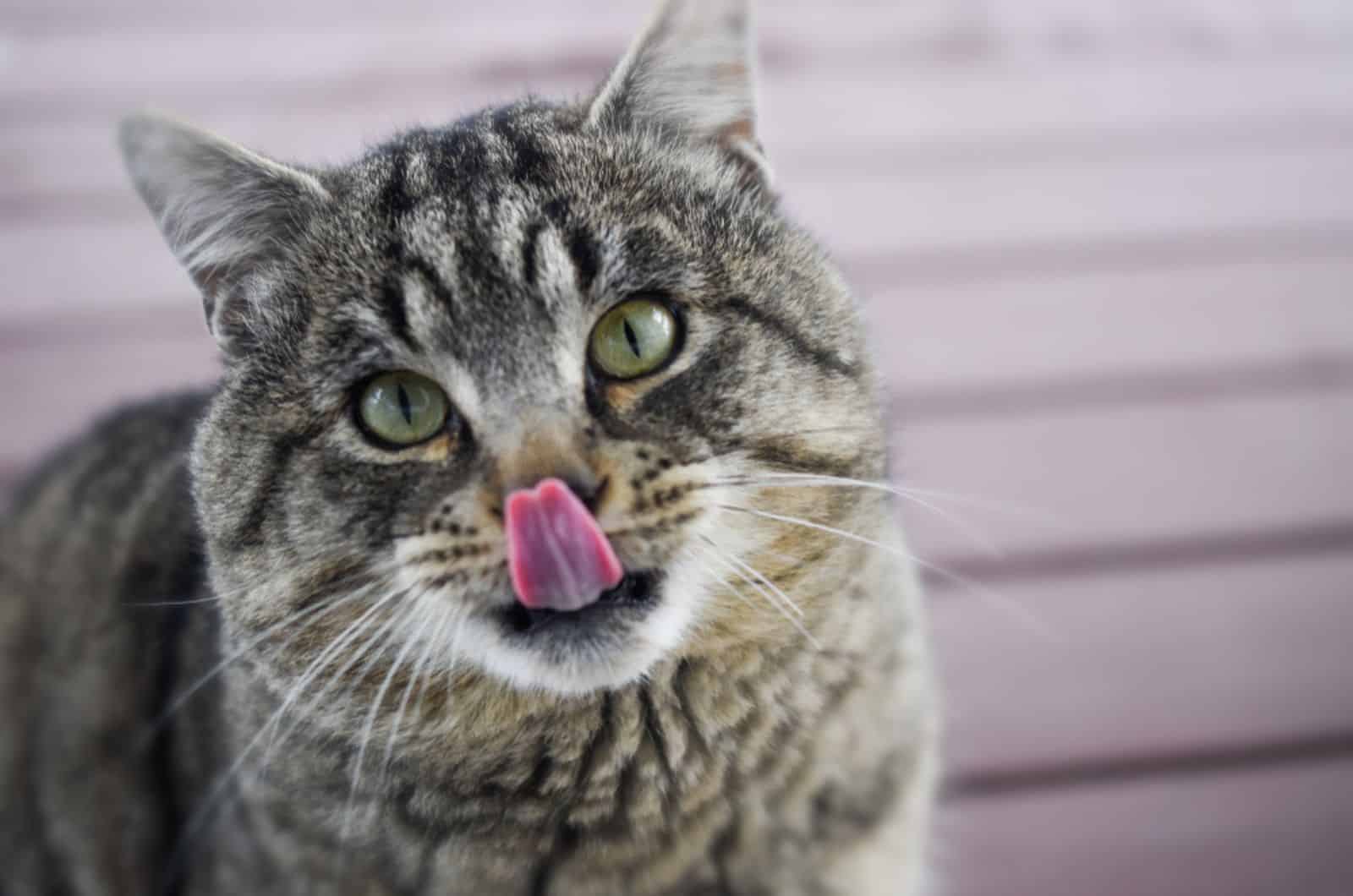 The Pixie-Bob cat was the result of an unplanned crossbreeding between a Bobcat and a domestic shorthair cat. As unplanned as it might have been, the Pixie-Bob is now much loved and sought after.

While it looks wild, the Pixie-Bob is calm, gentle, and affectionate. This breed of cat is very devoted and loyal to its human family and gets along well with everyone else, including the pet dog!

Check out: Why Do Cats Have Tails? 13 Questions & Answers 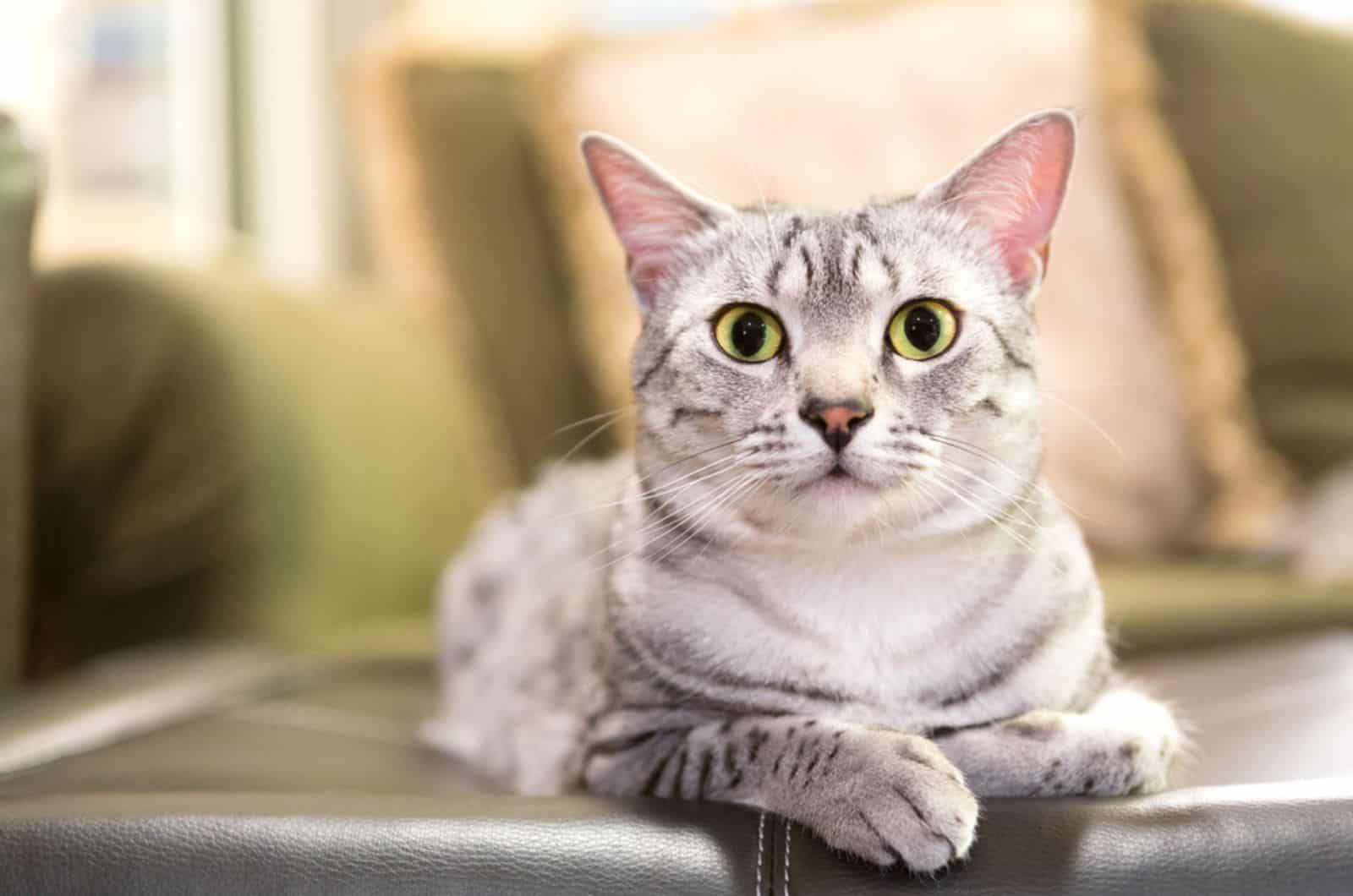 The Egyptian Mau is the only domesticated cat breed that has a naturally spotted coat.

The Egyptian Mau has long, thin legs and the personality of an Egyptian god/goddess, so it’s not only the name that reminds us of Egypt, it’s the cat’s majestic appearance and royal-like behavior.

They love to climb and perch on high spots to observe their “kingdoms and subjects”. They are also quite active and energetic, and they run fast, so owners have to provide plenty of room for them to run around and play.

This wild-looking cat is incredibly sweet in nature. The American Bobtail cat will show love to anyone who pays attention to it and enjoys its company, be it a human, another cat, or even a dog. American Bobtails are laid back, sociable, and adaptable.

These cats get along very well with everyone, and they have a calm and friendly demeanor, which makes them great travel and therapy cats.

If you’ve always dreamed of having a cat with a dog-like personality, but which is also trainable and adjustable to any circumstances, then the American Bobtail could be the perfect cat for you.

As you can see, there are several domestic cat breeds that resemble wild cats like leopards, tigers, cheetahs, etc. All of them are extraordinarily cute, without a doubt!

The domestic cat that looks like a leopard which we are most familiar with, is the Savannah cat. The Savannah’s coat pattern truly looks like that of a leopard. Other cats, like the Toyger, for example, look like mini versions of the wild tiger.

I hope you’ve found the answers to your questions and that you found this summary of domestic cats that look like leopards useful.

The Breeders List Of Best Savannah Cats For Sale In UK

[…] • Savannah: Only Domestic Cat That Looks Like Leopard, Or Is It?• Savannah Maine Coon Mix – Talk About A Majestic Cat! […]

[…] cats aren’t the only hybrid cat breeds that have a strong wild element, with their looks resembling leopards. However, these wild characteristics might fade with each new generation, resulting in a wide range […]

What Is A Bengal Cat's Lifespan? Health Overview