Cat lovers often say that Ragdoll cats are distant cousins of Siamese cats since they look like Siamese in long coats, lol. That is not actually true, but both breeds are exquisite and the Ragdoll seal lynx pattern does resemble the pattern of a Siamese cat.

Ragdoll cats almost always have a stunning sky blue eye color. This is somewhat of a rule for purebred Ragdolls, whereas Ragdoll hybrids may have a different eye color, varying from green to copper.

These cats may be different colors and patterns, and the seal-lynx combo is one of the rarer optionse.

As the Ragdoll seal lynx color-pattern mix is quite rare, let’s see what is so special about it, and what other color patterns are possible for a Ragdoll cat. 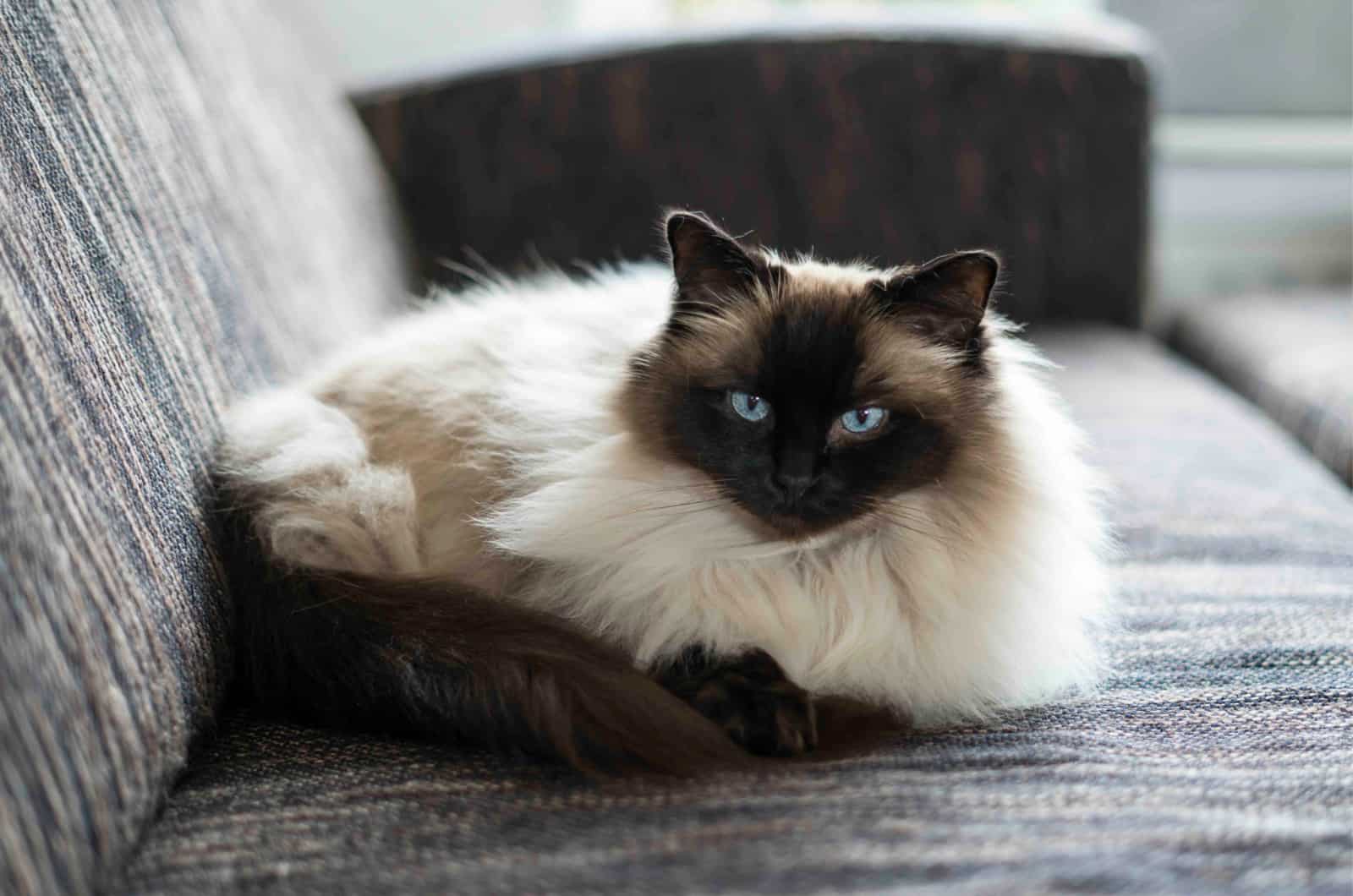 Purebred Ragdoll kittens are always solid white when born. They have a genetic defect that causes their pigmentation to appear gradually when they reach a particular body temperature.

Possible cat colors and varieties of the Ragdoll breed include red, seal, blue, chocolate, cream, and lilac (which is the rarest one).

All lynx Ragdoll cats can be referred to as lynx bicolor since the body is one color and the lynx points are another, usually in a darker shade.

The colorpoint Ragdoll tabby patterns are caused by a gene known as the agouti gene. The seal lynx ragdoll will have black lines all over its face, body, and tail. 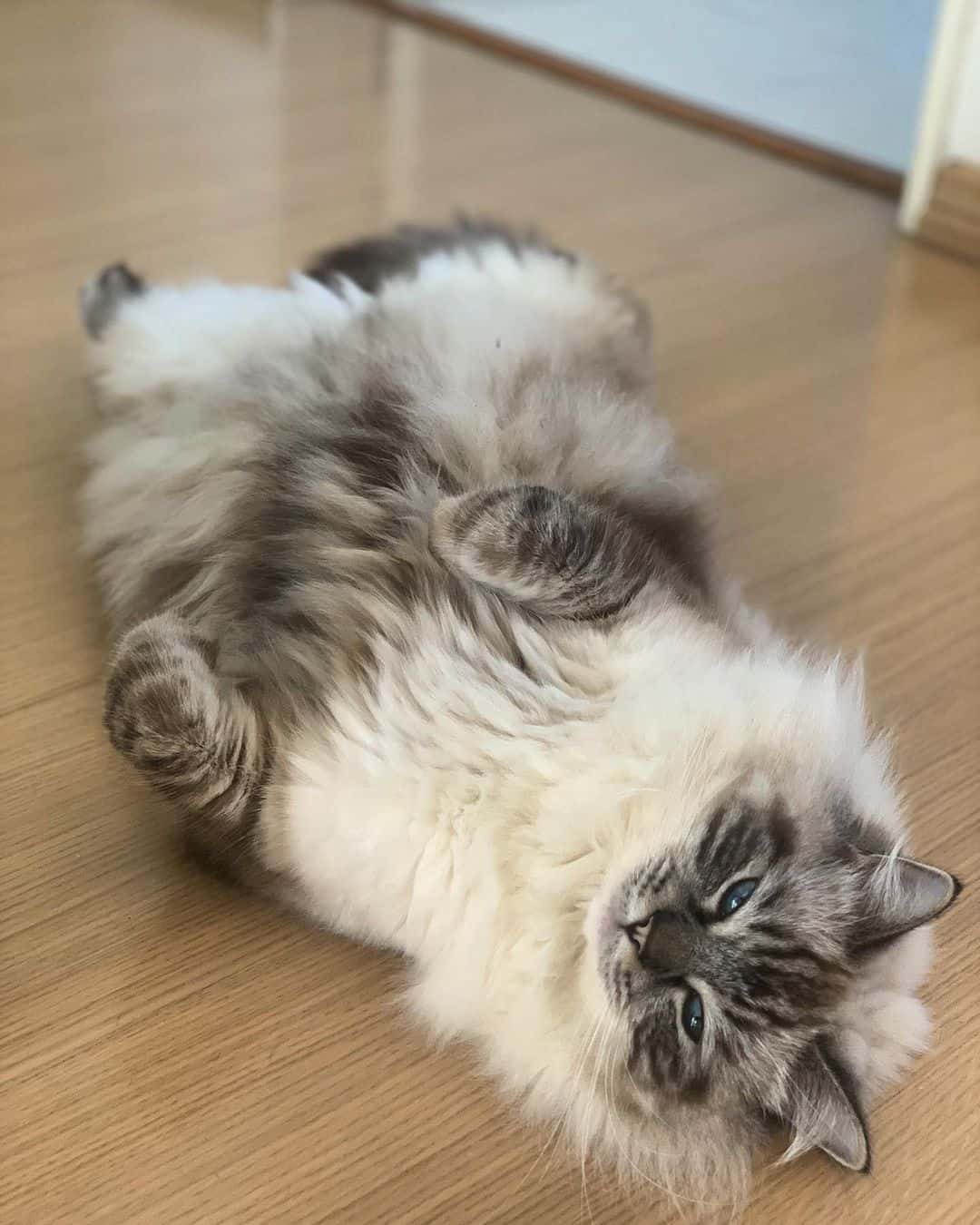 The Ragdoll seal lynx pattern is a ragdoll cat variation distinguished by its dark brown tabby points and black lines over its face, body, and tail.

The body of a seal lynx Ragdoll cat is cream in color, with a lighter shade on the stomach and chest. The points have well-defined seal brown bars separated by a lighter backdrop hue. It will have seal brown ears with a lighter imprint in the center.

The cat’s nose leather will either be seal-brown or pink with a seal brown edging, and it will have seal brown paw pads.

A Seal Mitted Ragdoll has very dark brown points on its ears, nose, legs, tail, and body. It has a white chin and white paws that make it look like it is wearing cute mittens. There are also be seal lynx mitted Ragdolls.

Seal is one of the various colors possible in Ragdoll cats. A seal Ragdoll’s body color can range from light to medium to dark brown – the depth of the brown can vary due to nutrition, genetics, and region.

The Seal Bicolor Ragdoll has an eye-catching pattern of dark and light hues. The cat’s coloring is seal i.e. dark brown markings, and the pattern of the marks is bicolor.

They have dark brown seal coloration on the ears, tail, and half of the face.

They also have the seal color on a portion of their back. This pattern of coloration on their back always reminds me of a little saddle! The pattern is in the form of a horse saddle, but the intensity of the colors varies from cat to cat.

The body of the Seal-Tortie Ragdoll cat is pale fawn to cream in color, with lighter colors on the belly and chest area. In senior cats, the body color may be speckled with cream.

The tips are seal-brown in color with red and/or cream mottling. The leather of the nose is seal-brown with pinkish mottling.

Other Ragdoll Lynx Point Variations Include:

The body of a lynx blue point Ragdoll is white-blue to gray in color, with brighter colors on the cat’s belly and chest. Body shading may be known as ghost striping or ticking. The points are distinctive deep blue-gray bars separated by a lighter backdrop hue.

It has dark blue-gray ears with a lighter imprint in the middle. The nasal leather is either slate-colored or pink with slate edges. The paw pads are slate gray.

Blue Ragdolls with this pattern have bodies that range from bluish-white to platinum gray. The colors are cool in tone, with softer shades on the cat’s tummy and chest. The pattern on the cat’s body may take various forms, such as striped or ticked.

Their focal points are prominent deep blue-gray bands with a lighter backdrop color. Their ears have a dark blue-gray tint with a lighter imprint in the middle. Blue Lynx Point Ragdolls typically have blue eyes, as do all purebred Ragdoll cats.

With a few exceptions, the blue-mitted Ragdoll cat is generally similar to the colorpoint pattern. The Ragdoll’s mitted pattern means it has pure white front feet ťhat resemble lovely white boots. The white boots on the rear feet extend all the way up the back legs.

This pattern also features a little white chin patch that extends all the way down the abdomen to the tail. The white patch on the stomach might be either thin or broad; this differs from one cat to the next.

The mitted Ragdoll cat also has a magnificent white ruff (chest), which is one of my personal favorite traits of the breed.

The lynx chocolate point Ragdoll has ivory fur. The body shading may be ticked. Its points are made up of warm milk-chocolate bars on a lighter backdrop hue.

Its ears will be milk-chocolate in color, with a paler fingerprint in the center. The nose leather is either fully cinnamon or pink with cinnamon edges.

See also: The Beauty Of The Chocolate Point Ragdoll Cat

The Red Lynx Ragdolls are commonly known as Flame Point Ragdolls, and they have white-colored bodies. Their points have clear deep red bars separated by a lighter backdrop hue.

The ears have a dark red color with a lighter imprint in the center. The nose leather and paw pads are either dark pink or coral pink.

The Lilac Lynx Ragdoll’s body is glacier white. The shades of the cat’s body color may be in ghost stripes or ticks. It has icy gray points with distinct pinkish stripes that are separated by a lighter backdrop hue.

A Lilac Lynx Raggie will have frosty gray ears with a pinkish tone and a paler imprint in the middle. Its nose leather will be lilac-pink or pink with lavender-colored edges.

The Cream Lynx Ragdoll’s body color is mostly bright white. The body shades may be visible stripes or may appear ticked, and are separated by a lighter backdrop shade.

The ears range from light-pink/cream to pale beige with a lighter imprint in the center. The nose leather and paw pads may range in color from dark pink to coral pink. 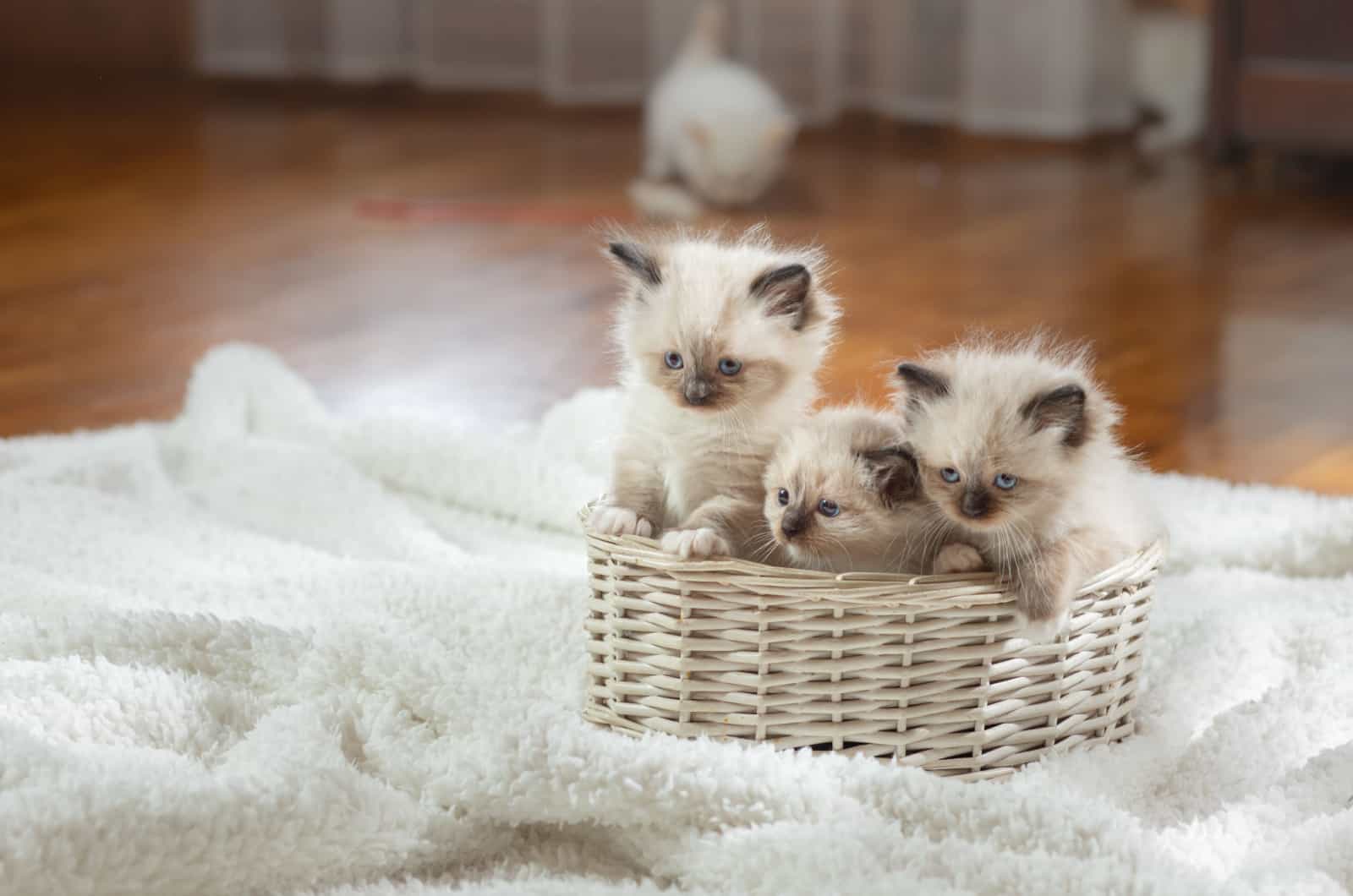 There are many Ragdoll cat breeders across the USA, but not all of them are reputable and registered. I can recommend a few great breeders I’ve done research on lately, so you have a few options if you’re looking for a cattery to adopt a Ragdoll kitty.

The Ragdoll cat breed is quite unique, and whether you’re looking for a rare purebred Ragdoll seal lynx or even a Mink Ragdoll, you’re sure to have some luck with one of the breeders from the following list:

2. 7 Best Ragdoll Breeders In Massachusetts: Check Them Out!

Ragdoll cat prices typically range from $800 for a pet to $2500 for a purebred Ragdoll. However, prices vary depending on the breeder, region, and whether or not breeding registrations are purchased.

You may even find Ragdoll kittens for sale for as little as $450. These will come with a spay/neuter agreement, ensuring that you’ll only keep the Ragdoll cat as a pet. Breeding cats always cost much more.

Spay/neuter agreements are almost always requested from buyers as most reputable breeders only sell breeding cats to other registered and ethical breeders.

How much is a lynx Ragdoll?

Lynx point Ragdoll cats usually cost around $1.3k. However, the price will depend on the cat’s age, breeder, breeder’s standards, and registration papers as well.

How big do lynx point Ragdolls get?

The size of a lynx point Ragdoll cat is the same as that of any variety of Ragdoll cat. The lynx point is simply the cat’s pattern, and this doesn’t affect the cat’s size.

Ragdolls usually weigh from 11 to 20 lbs, with males being generally bigger and heavier than females. Their height ranges from 9 to 11 inches when they reach their adult body size.

What is the lifespan of a lynx Ragdoll?

The natural lifespan of a lynx Ragdoll cat is approximately 16 years, but it can be anywhere in the range of 13 to 18 years.

What are the colors of a seal lynx Ragdoll?

The color points of a Ragdoll seal lynx have distinct seal brown bars separated by a lighter backdrop hue.

They have seal-brown ears with a lighter imprint in the center. The nose leather will either be pink with a seal brown edging or fully seal-brown, and the cat’s paw pads will also be seal-brown.

How long are Ragdolls?

Ragdolls typically weigh between 11 and 20 pounds, and when they reach adulthood, their height ranges from 9 to 11 inches. Their length range is typically between 17 and 21 inches.

Siamese cats also have the seal lynx combo, and both these breeds can pull it off so well!

To conclude, Ragdoll cats may have many different patterns and many different colored coats. The beautiful Ragdoll seal lynx will have deep brown points with lighter Lynx stripes or bars.

Their bodies can have lighter-brown stripes and ticks on top of their cream-colored fur. Their noses are either seal-brown or pink with seal-brown margins at the edges, and their cute little paw pads are of the same color.

Hopefully, this has answered all your questions about the Ragdoll seal lynx pattern!

How that you know all about the Seal Lynx Ragdoll, let me introduce you to 6 Things That Make The Ragdoll Blue Lynx So Special!

All About Fever Coat Kittens And Their Magical Color-Changing Ability

Introducing You To The Charming Blue Bicolor Ragdoll Cat