Cats tend to rub their face against furniture, objects and their humans. They also like to sleep with us, watch us, and so on. However, you may be wondering, why do cats flop?

There are many reasons for cats flopping down in front of their owners. It may indicate a sign of trust or affection, or it can even mean that they’re preparing to clean themselves!

I know, cat’s behavior is one big interesting mystery after another!

Check out the text below to find out more about the most common reasons why do cats flop down.

Why Do Cats Flop In Front Of Their Owners?

Cats communicate with their owners in many different ways. Some cats are more vocal, while others are more physical.

When flopping down on their side or on their back, cats expose their bellies. This is the most vulnerable part of their bodies.

A cat’s belly is the most vulnerable part because this is where many of the most important organs are located, and if the cat is hurt in this area, it can be serious.

Adult cats are aware of this as they’re grown up and their natural instincts are stronger than the developing instincts of kittens.

When a cat is lying with its belly exposed, it means that it trusts its owners to protect it, and also it probably wants to be pet.

So, why do cats flop in front of you? Continue reading to see the 10 most common reasons why cats flop to the side, or throw themselves on the floor when they see you. 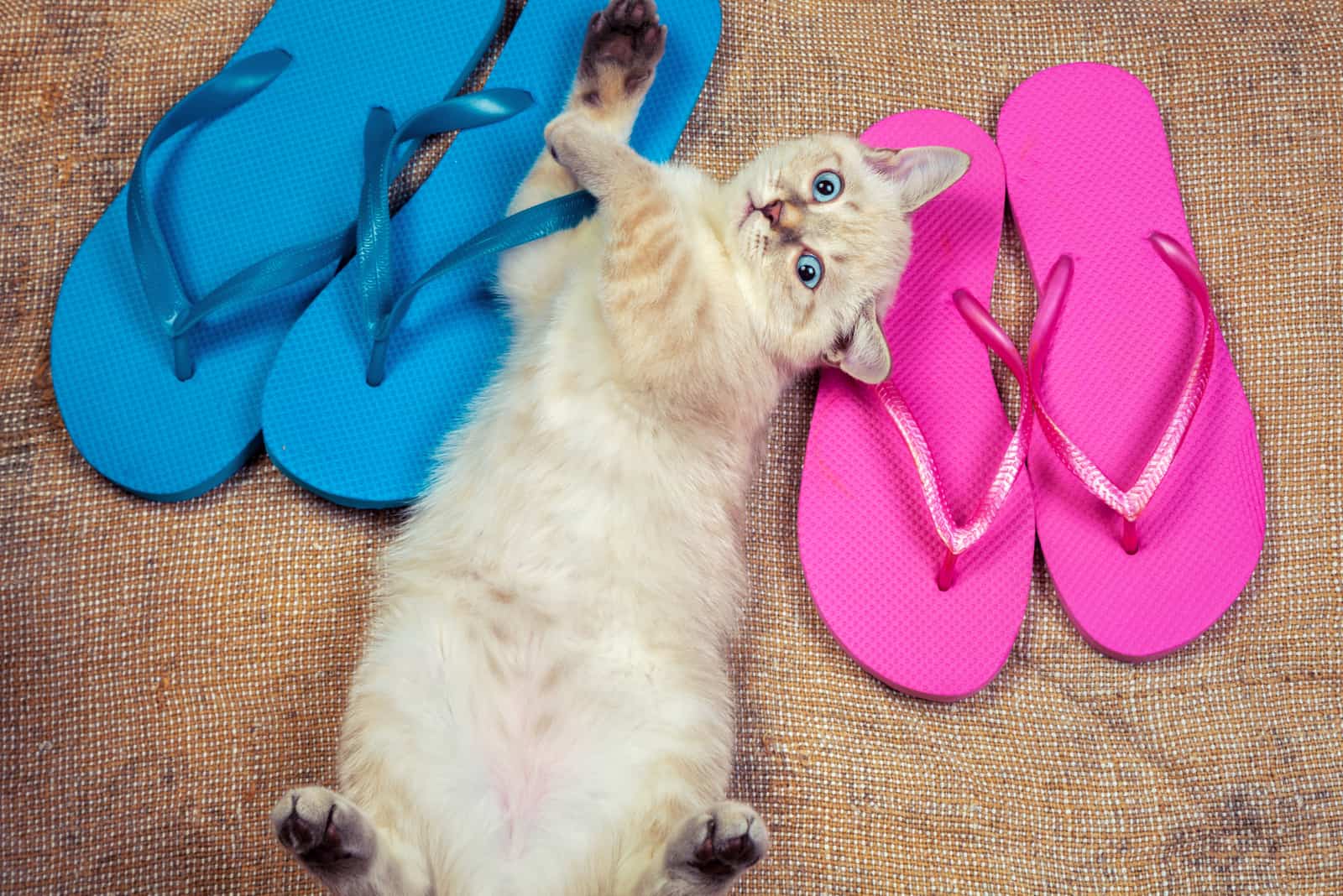 You can try giving your cat a toy or playing with it to see if this is the case when it flops in front of you.

Later on, how your cat behaves will depend on how you usually react to your cat flopping down in front of you. If you immediately start playing with your cat, it will probably expect this to happen again the next time it flops.

2. Your Cat Loves And Trusts You

It is a known fact that when cats lie down with their stomachs exposed, they’re expressing trust. It means that they are relaxed and that they trust their owners.

When a cat flops in front of you, it also indicates that it trusts you and feels comfortable and safe enough to flop around and expose its belly.

This is another one of your cat’s ways of showing love and affection towards their humans.

Exposing their bellies and flopping on their backs is the ultimate sign of love since cats aren’t capable of defending themselves in this position. It means your cat trusts you to protect them from any danger.

3. Your Cat Wants Your Attention 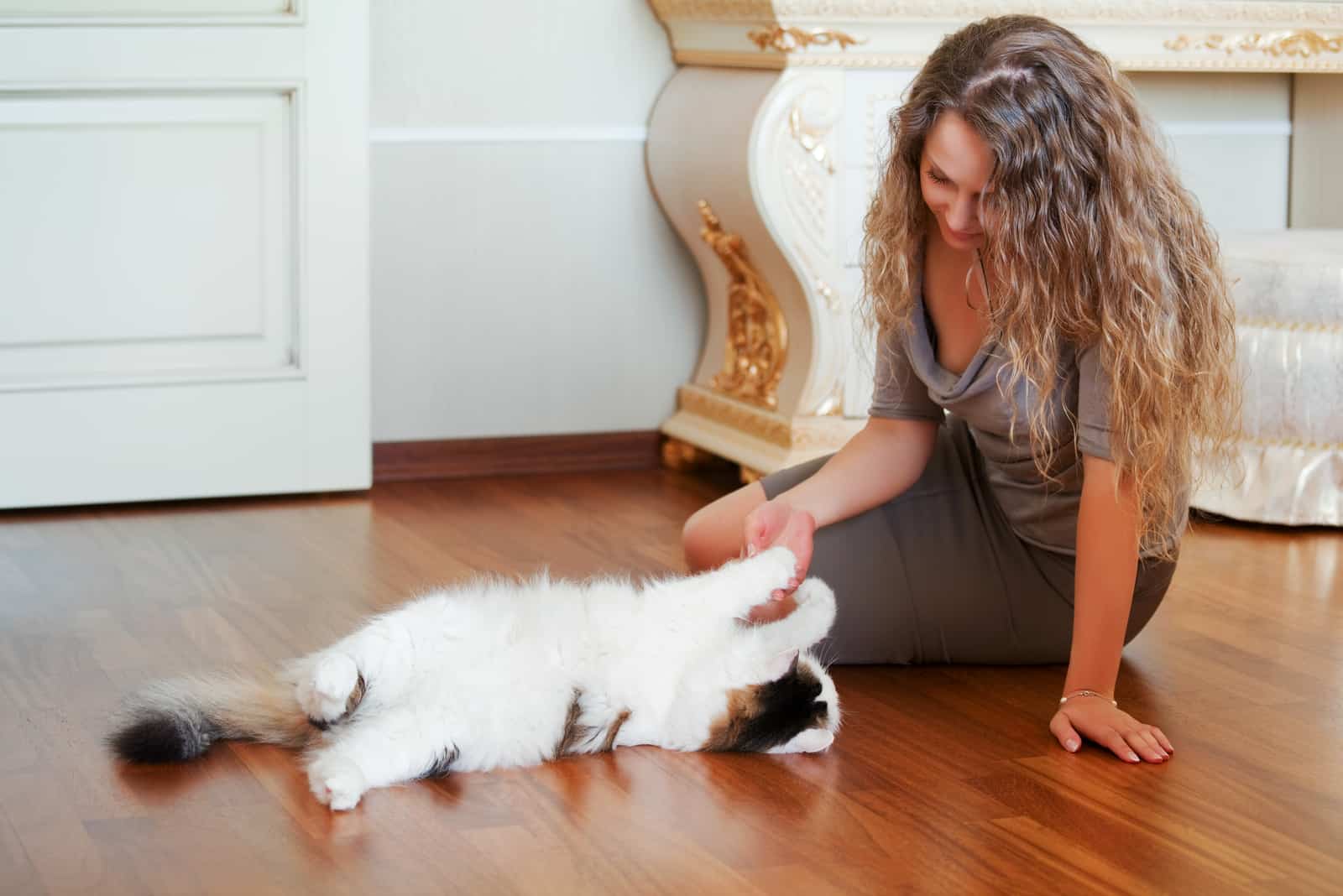 Your cat might be asking for your attention because it wants to play, but it can also be because they’re hungry, or they’ve just missed you and want to talk to you.

Cats also flop down in front of their owners as a social roll, as a way of greeting you when you come home.

One of my cats, surprisingly a male cat, always does this when I get home from work. He flops down and rolls over on his back, purrs like there’s no tomorrow, and meows like crazy. He doesn’t need me to pet him, he just wants to have a conversation.

I always joke that we tell each other everything that happened to us that day!

4. Do Cats Flop Down To Cool Down?

You bet they do! Cats will flop down to the ground in order to cool themselves. While this may be surprising to some cat owners, others will be used to it.

Cats often go and roll around in the dirt, especially during the warmer summer months. Cats, and dogs both tend to do this; they dig around a bit, and then flop down in the dirt.

While the upper layer of dirt is usually warm because of the hot weather, the dirt underneath is cool, so cats tend to scratch and dig a bit, and then roll around in the cooler layer of dirt.

However, if your cat seems to dig around a lot to constantly try and cool itself, you should consult with a vet.

Even though they can stand the heat pretty well, cats can suffer from heat stroke or fall ill due to being too hot.

Always monitor your cat to ensure they are drinking enough water, especially during hotter days. You can also brush them and then wipe them with a damp cloth to help them to cool down a bit. 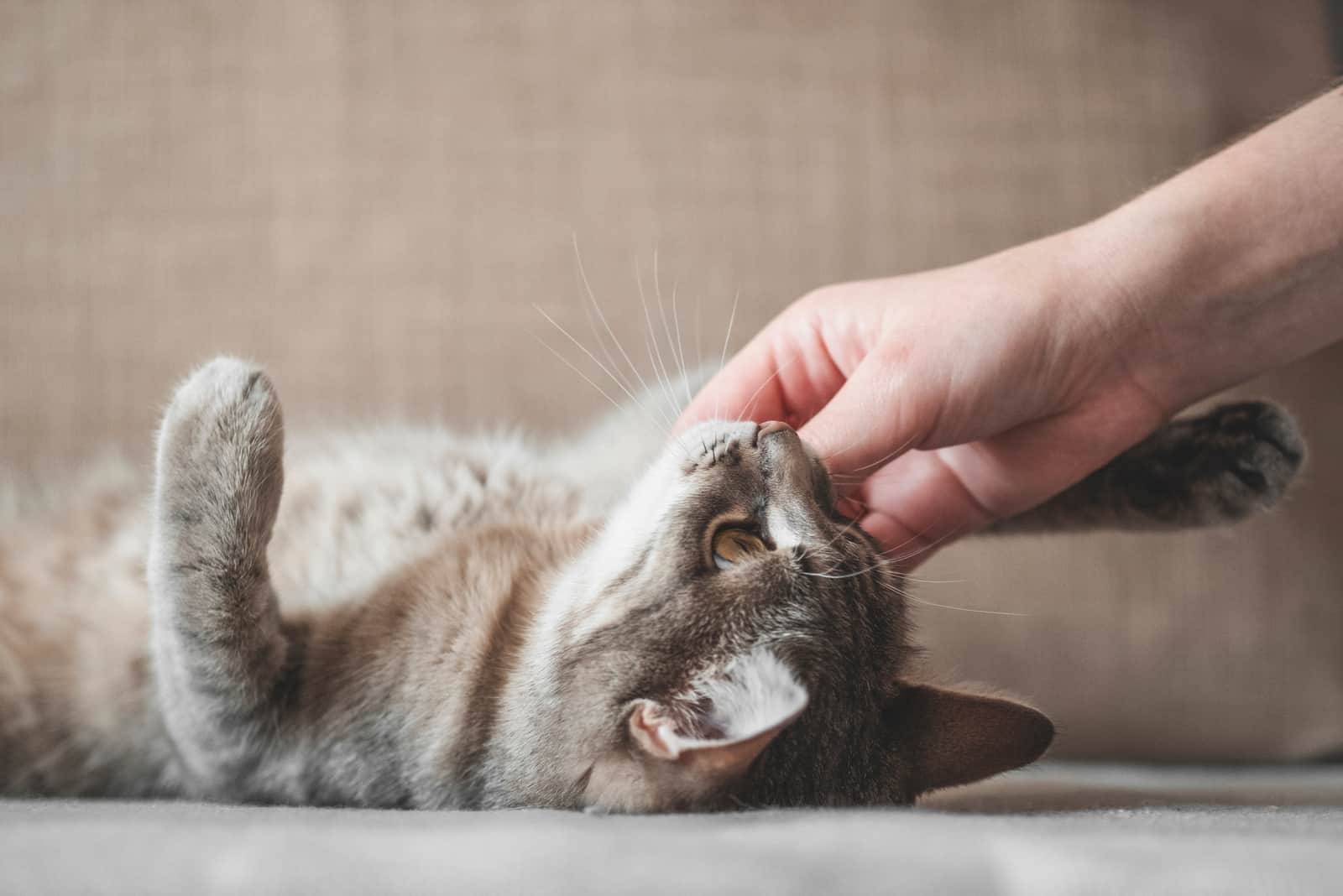 If your female cats are spayed, then this is not the reason why your cat flops down in front of you.

However, if you have a female cat that is intact (not spayed), it is highly likely that she is in heat. Female cats often flop down and meow loudly so male cats know that they are ready to mate.

When cats are in heat, they are usually more affectionate too. Your cat will want more back scratches and it might even head butt you more frequently because it won’t know what to do with all that love.

Ah, what a truly amazing thing a cat’s body language can be!

6. Your Cat Is Leaving A Mark

Why is my cat flopping and rolling around, if it’s not love, playfulness or a demand for cuddles? Well, your cat might just be leaving their mark.

Cats have scent glands in many places on their bodies, and by rubbing them, they release pheromones, which mark their territory.

The main reason cats do this is to let other cats know that the designated area is theirs, and even to mark their humans.

When cats flop down and roll around, they’re also spreading their scents on the ground they’re rolling on, leaving their mark there for other cats to sniff around, so they know who is boss!

Another reason cats may roll in dirt is to groom themselves. This appears to be somewhat of a paradox, however cats often indulge in these ‘dust baths’.

Flopping down and rolling around in the ground is similar to their usual cleaning session; i.e. cleaning their bodies with their tongues.

The dirt they are rolling around in can remove more persistent filth or excess oils in the underlayers of their coats; Maine Coons are highly prone to this type of cat behavior.

After this, cats can clean any dirt that’s left much more easily, which eventually results in a super clean coat.

Rolling around on the ground is also very effective for removing pests. When your cat rolls on the ground, a large area of their body is massaged at the same time, whereas when they lick themselves, they can only clean a small part at a time, section by section.

You should always pay attention to this type of behavior, as cats tend to do it when they’re infected with pests, such as fleas, etc.

If you notice your cat flopping down onto the ground outside and rolling in the dirt more often than usual, consider taking it to the vet and getting it checked out for unwanted guests.

Cats looove to cuddle! It does depend on the individual cat’s personality; some enjoy snuggling more than others, but what I know for sure is that almost every cat will sometimes ask for cuddles.

When a cat flops in front of you it might indicate that a cuddle session has been scheduled: and it begins right now lol!

Cats indicate their needs in different ways, and this is true of their need for cuddling too. Your cat might be purring loudly, jumping up to nap in your lap, or flopping down in front of you.

If you’ve tried playing and your cat’s not interested, then it’s most likely that your cat rolls from side to side because it wants a belly rub or a cuddle.

9. Did Someone Say Catnip? 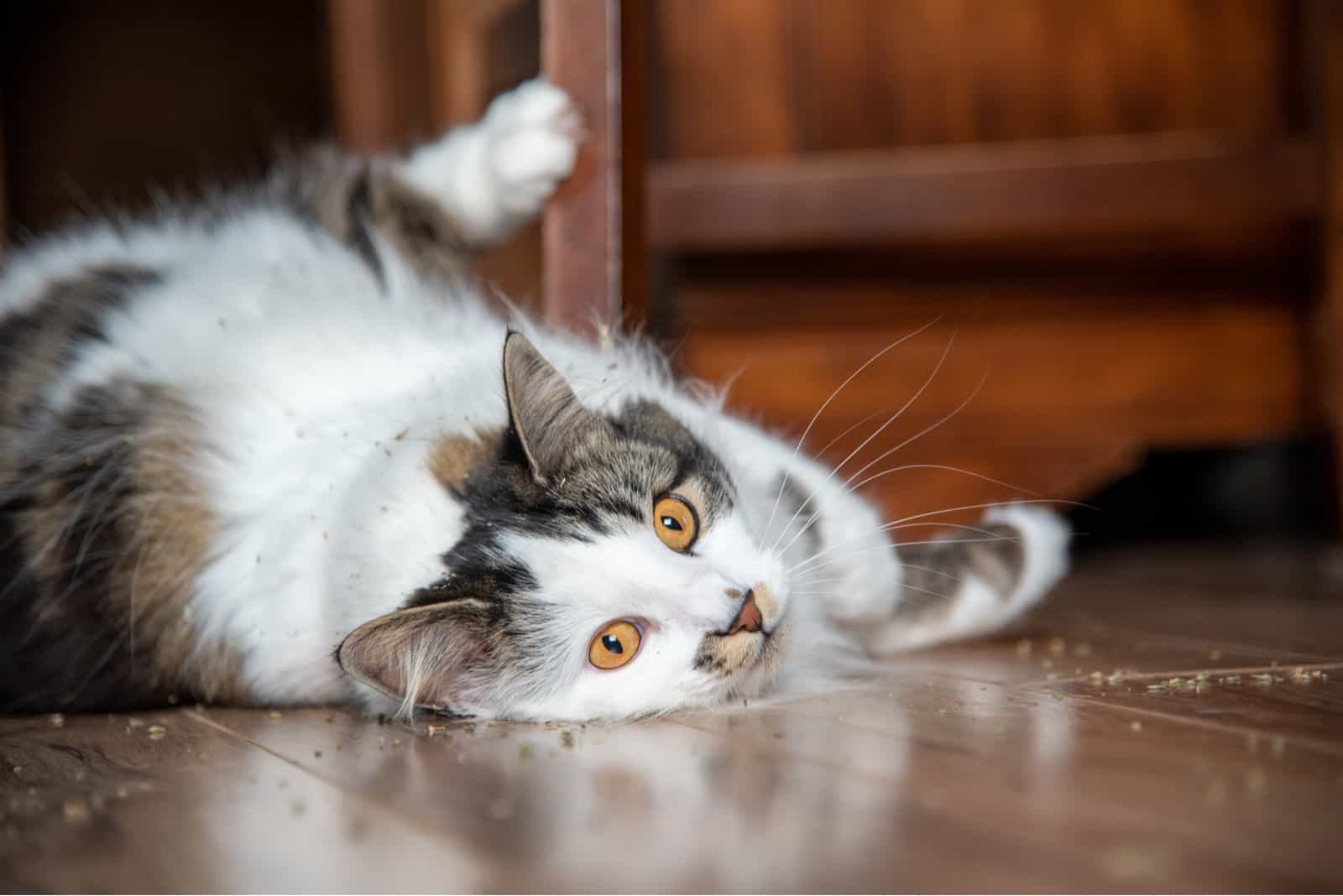 Catnip can affect cats in many different ways. It contains nepetalactone, which has something of a psychedelic effect.

Your cat might be feeling “high” for a little while after ingesting catnip. Even if you didn’t give any catnip to your cat, it may have still ingested it from some toys or other cat products that you have in your home.

This might mean your cat is reacting more slowly than usual or flopping around in front of you… in any case, catnip results in happy cats, and there is rarely anything to worry about.

Most cats will flop down and zone out after ingesting catnip, but rarely a cat will become even more active and they might even display some aggression or loud vocalization for a couple of minutes until the catnip effect wears off.

10. Your Cat Simply Loves To Flop

Cats flip over because they like the sensation of having their back scratched.

They may have an itch that they’re not able to reach, or they may find that stretching their bodies provides all their muscles the stretch that they wanted.

It can also be important where your cat tends to flop down the most. The material of the floor can help them scratch or stretch.

If you pay more attention to when and where your cat flops, and what it does next, you’ll get a better idea of exactly why do cats flop in front of us.

Cats tend to rub their face against things or against their humans, just as they like to sleep with us, watch us, and so on. So, why do cats flop?

As I’ve said, there are many reasons for cats flopping down in front of their owners. It may indicate a sign of trust, or affection, or it can even mean that they’re cleaning or scratching themselves! Cats truly are interesting creatures!

How your cat behaves will depend on how you have reacted to its previous behavior. So how you react to your cat flopping will influence how often they do it.

If you start petting your cat or playing with it, your cat will expect that reaction from you the next time it flops. Cat lovers will love this too as it is a great indicator as to when is the best time for a cuddle session with your cat!

• How Do Cats Choose Who To Sleep With? (Best Explanation)

• Why Does My Cat Not Sleep With Me Anymore? Possible Reasons

• 6 Reasons My Cat Keeps Meowing And Rubbing Against Everything