If you own a cat, you will notice that your cat licks itself a lot. This is their main method of cleaning themselves and maintaining their fur, especially during shedding season.

If you have a multi-cat household, you’ve probably also wondered why do cats lick each other? There are four main reasons for this. Usually, it means that cats like each other and that they care about each other. However, it’s more complicated than that.

So, if you own more than one cat and wonder why do cats groom each other, read on and learn more about this cat behavior!

Why Do Cats Lick Each Other? 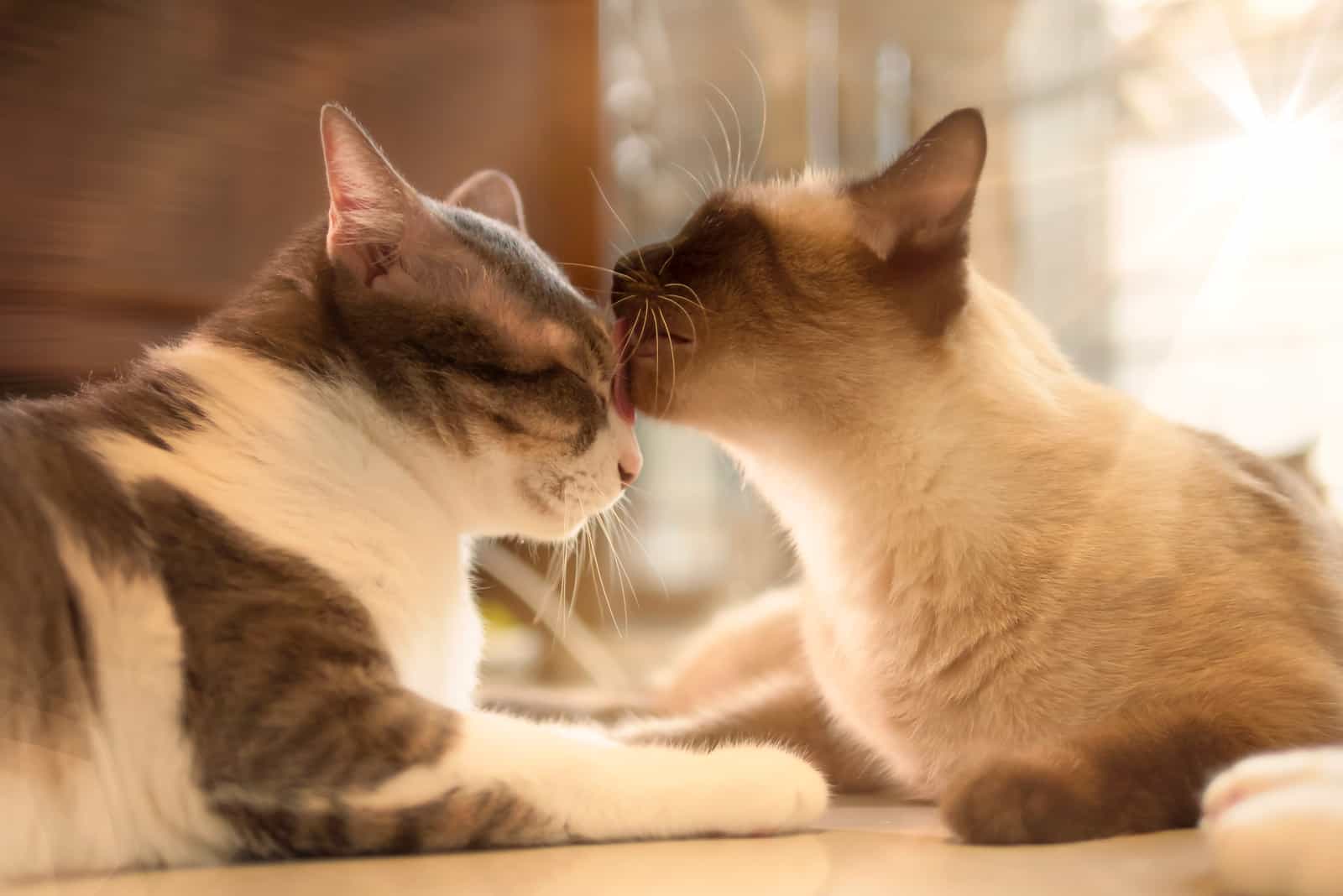 If you don’t know why do cats lick each other, worry not because I’m here to help!

Licking or grooming is a natural instinct in animals, especially cats. When a cat licks itself, usually it means it’s having a wash. This feline behavior is called self-grooming or autogrooming.

However, when cats groom each other, that behavior is called allogrooming. Allogrooming starts from a young age. For example, a mother cat licks her newborn kittens to clean and warm them. There are also many other things that influence allogrooming.

A lot of time, cats lick each other because they’re siblings or mates; in this case, you may notice that grooming behavior between them is more frequent.

Why Do Cats Groom Each Other? 4 Possible Reasons

Here are the 4 common reasons for mutual grooming among cats, most of which are pretty sweet and give us important insight into how cats show love to each other. 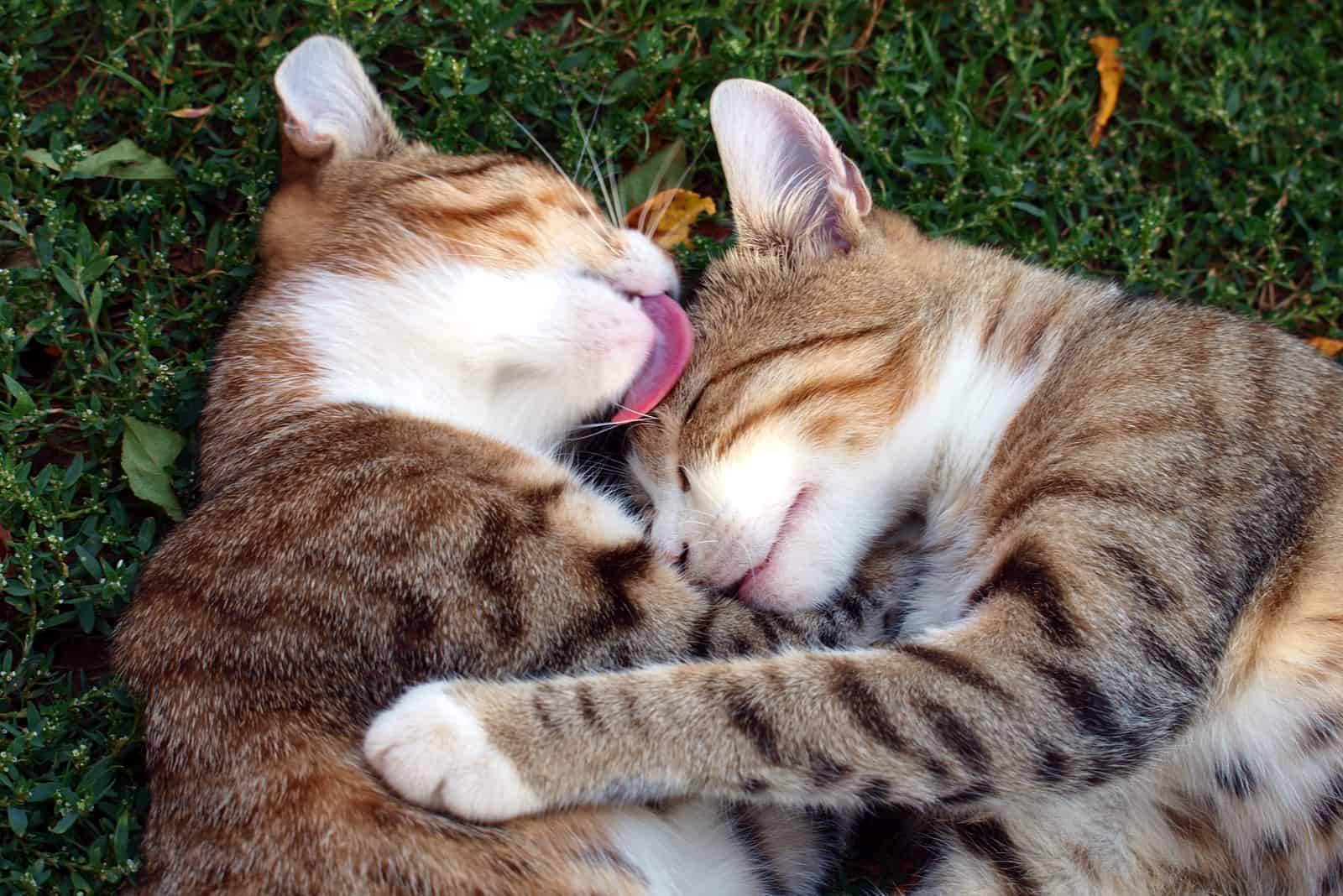 You have to admit that nothing can compare to a mother’s love. One of the ways mother cats show affection to their kittens is by licking them.

When kittens are born, their mother immediately cleans them by licking them to remove fluid and tissue that can put them in danger by attracting predators.

Kittens are born blind and they require constant help from their mother. Their mother licks them in order to warm them, clean them, and stimulate their defecation and urination. As they grow, she may even bite the fur in order to find fleas.

Kittens continue to practice this behavior toward their siblings or other cats as a sign of affection, comfort, and protection. However, if you adopt a stray kitten, and wonder why does my cat behave differently? It means it lacks that understanding of grooming behavior from its mother, and the best thing you can do is mimic it.

Usually, kittens without littermates may show inappropriate behavior toward other cats or pets. In that case, you might want to call an expert to advise you – especially if you don’t have experience with dealing with behavioral issues..

When it comes to cats, grooming is usually a sign of affection. They help to clean one another, especially around areas that are tricky to reach.

In doing so, they show how happy they are in each other’s company.

While grooming they also exchange their scents and enjoy warmth and affection. While this is really sweet, you shouldn’t leave all the grooming to your cats. You still need to groom your cats and show them your love, as well as providing them with appropriate health care. 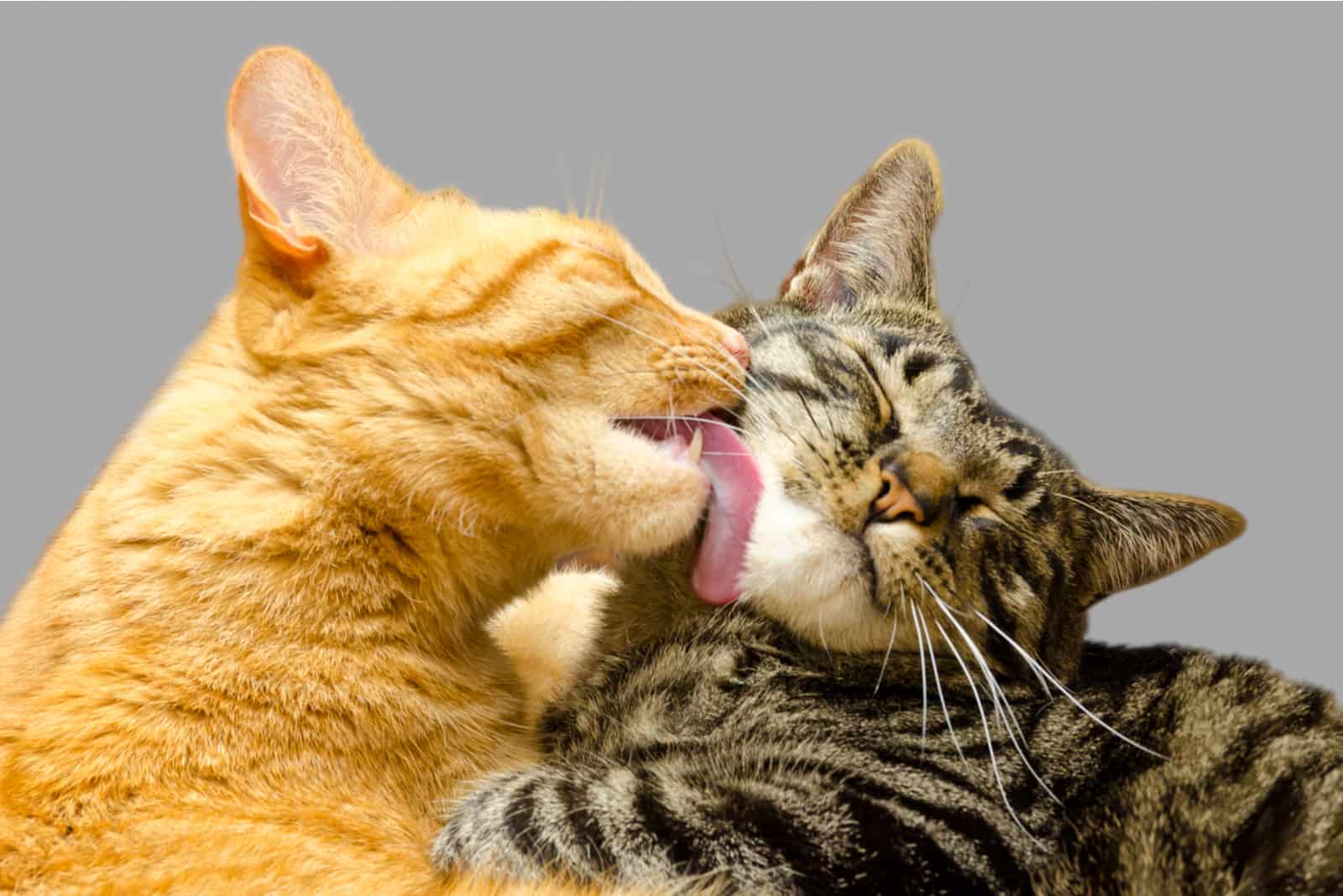 If you own two adult cats from kittenhood, they usually develop a pretty strong bond. They’re together all the time and show each other love and affection.

If they’re purring, you’ll know that they’re relaxed and that they’re enjoying their sweet time, so you don’t have to worry.

Social Bonding With A New Cat

Bringing a new cat home can disrupt or upset your first cat, especially if it’s an indoor cat. The new family member disrupts her routine and invades her personal space. Don’t worry! There are several things that a cat owner can do in order to create a bond between two cats.

• You can use a synthetic pheromone spray in order to reduce the tension between the new roommates.

• You can neutralize their scent in order to make cats more comfortable in each other’s surroundings.

• You can use the same combs or brushes on both cats in order to get them close to each other.

If this helps, it means that your cats accept each other and eventually they will engage in social grooming.

If you wondered why do cats lick each other, well, apart from the sweet reasons we have discussed, another reason is as a way of showing dominance.

So, how does it work? Who grooms and who is being groomed?

It might seem a bit unusual, but studies show that cats have a social hierarchy where higher-ranking cats usually groom lower-ranking cats, the less dominant ones.

The most interesting thing is that these dominant cats usually lick the other cat’s head, face, and neck area, because that is their vulnerable area. By licking that area, cats show their dominance without causing any harm, making it clear who’s in charge!

This sign of dominance is the most common in a multi-cat household, so in order to prevent fights, you should provide your cats with a lot of space and make sure that every cat has its own litter box, separate bowl for food, and a unique place to sleep.

However, if you own spayed or neutered domestic cats, you probably won’t notice the difference between female and male cats and their allogrooming. The most active groomers are intact female cats during the breeding season, which you’ll certainly notice. 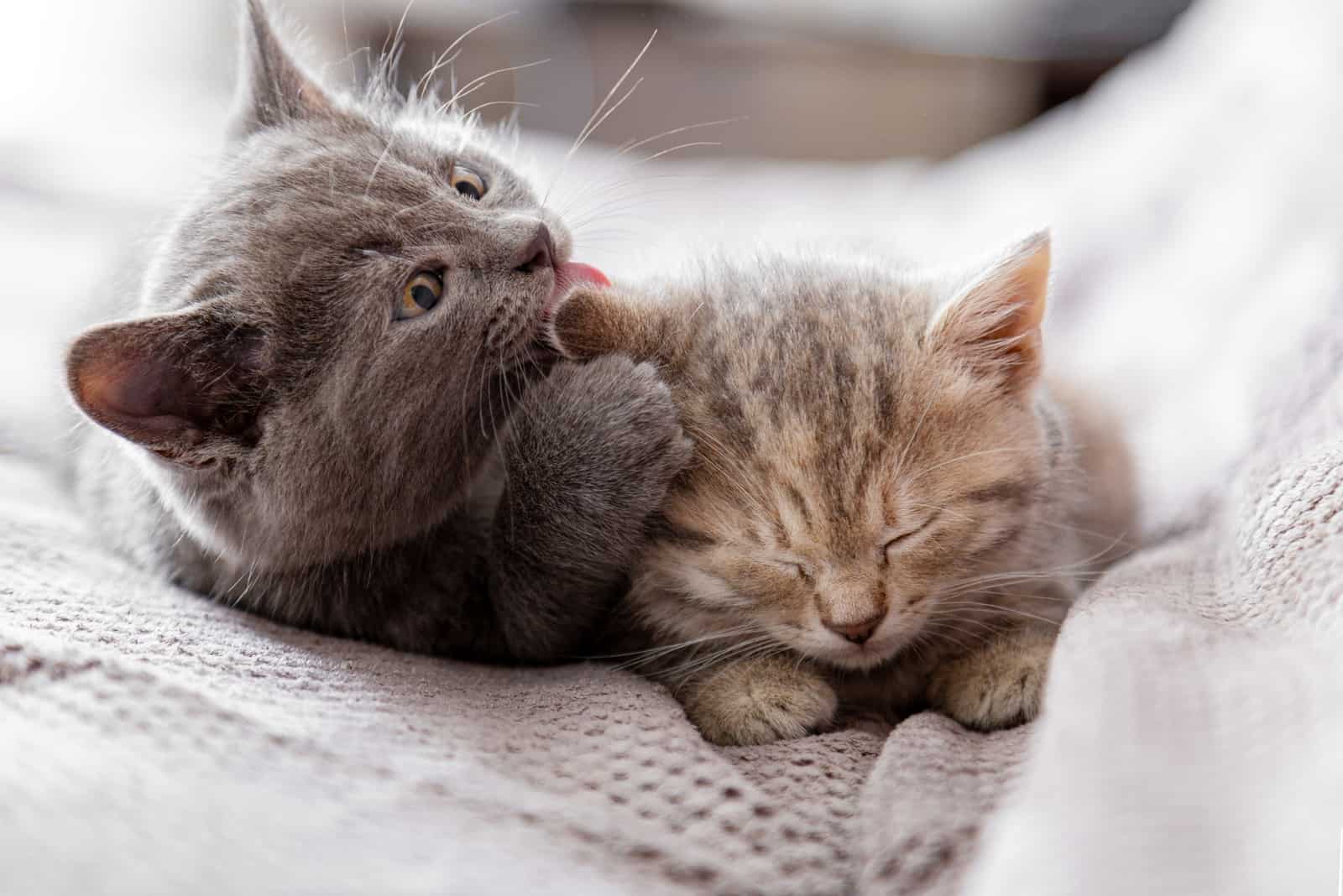 Why Do Cats Lick Each Other And Then Fight?

If cats lick each other and then suddenly start a play fight, it means that the licking led to over-stimulation. Some cats are not very affectionate and may become irritated when touched or groomed for too long. This may cause an aggressive reaction or even a catfight.

Is It Normal For Cats To Lick Each Other’s Privates?

Yes, it is natural for cats to lick each other’s privates, especially because some cats aren’t able to reach that particular body part. In fact, they’re helping each other out!

Is It Possible That Grooming Can Cause Health Problems?

The answer is yes. Overgrooming may cause health issues; the most common problem is hairballs. So, as a good pet parent, you have to pay attention to that and try to brush your cat frequently in order to reduce the amount of hairs they ingest by licking.

Hopefully now you are more familiar with the topic of why do cats lick each other.

Allogrooming is one of the ways cats express their feelings. In this case, it may be their way of expressing affection, dominance, or even bonding. It is a natural behavior for cats and they learn it from their mothers at a young age.

It’s the sweetest thing to see your cats bonding and enjoying their grooming time together, but make sure that you also brush them and show them affection.

Why Do Cats' Tongues Feel Like Sandpaper? Fun Facts To Know

Warning Signs When Introducing Cats And How To Do It Properly!

[…] Cats licking each other means they are spreading their scent on each other. Not only is it the cutest thing ever, it also means that your cats are finally becoming affectionate towards each other. […]