The commencement of the breeding season always has the whole neighborhood on full alert. Yowling, hissing, and screaming are all integral parts of cat behavior during ovulation.

During the start of a heat cycle, female cats will often send out signals to inform nearby male cats that she is open for business. Male cats during that time will become even more aggressive than usual as they compete for mating rights.

Any pet owner that has witnessed the mating process of cats may be left wondering “Why do female cats attack males after mating?”

The following paragraphs will answer that question, along with others, so you can learn valuable information about the mating process of domestic cats.

Why Do Female Cats Attack Males After Mating? – Is it Normal? 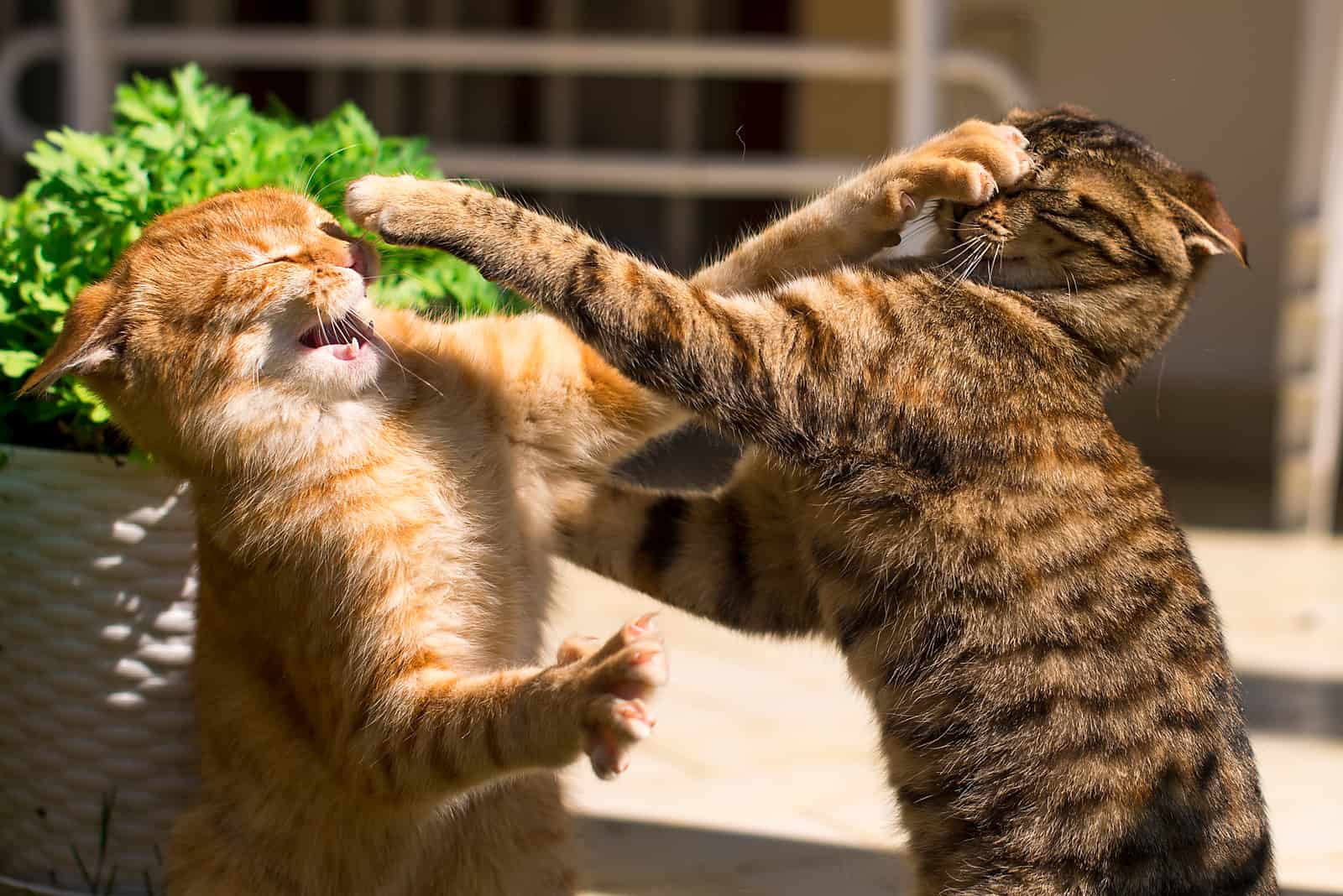 This is a perfectly normal cat behavior.

Female cats attack male cats after mating because the act of pulling out the genitals hurts the recipient.

Tomcats have small, outwardly-pointing spikes on their genitals. When the mating process is finished, the tomcat pulls out the genitals, which causes pain to the female cat.

After mating the female cat’s eyes dilate, and she will scream loudly, and proceed to lash out at the tomcat.

Sometimes, if both cats know each other well, the tomcat might be spared the attack.

Does A Male Cat’s Penis Have Barbs?

A spined genital has an important part in the copulation of cats. Scientists claim that the main purpose of barbs is to get the ovulation process started more quickly.

It was previously thought that the purpose of a spined penis was to eliminate any sperm from a Tomcat that may have already mated with the female.

However, upon further research, this has been refuted. Scientists have discovered that a single litter of kittens can be the product of different fathers.

The barbs on the male cat’s penis are instrumental in starting the ovulation process. The female cat’s ovaries require the mating process to release an egg.

Why Do Female Cats Roll After Mating? 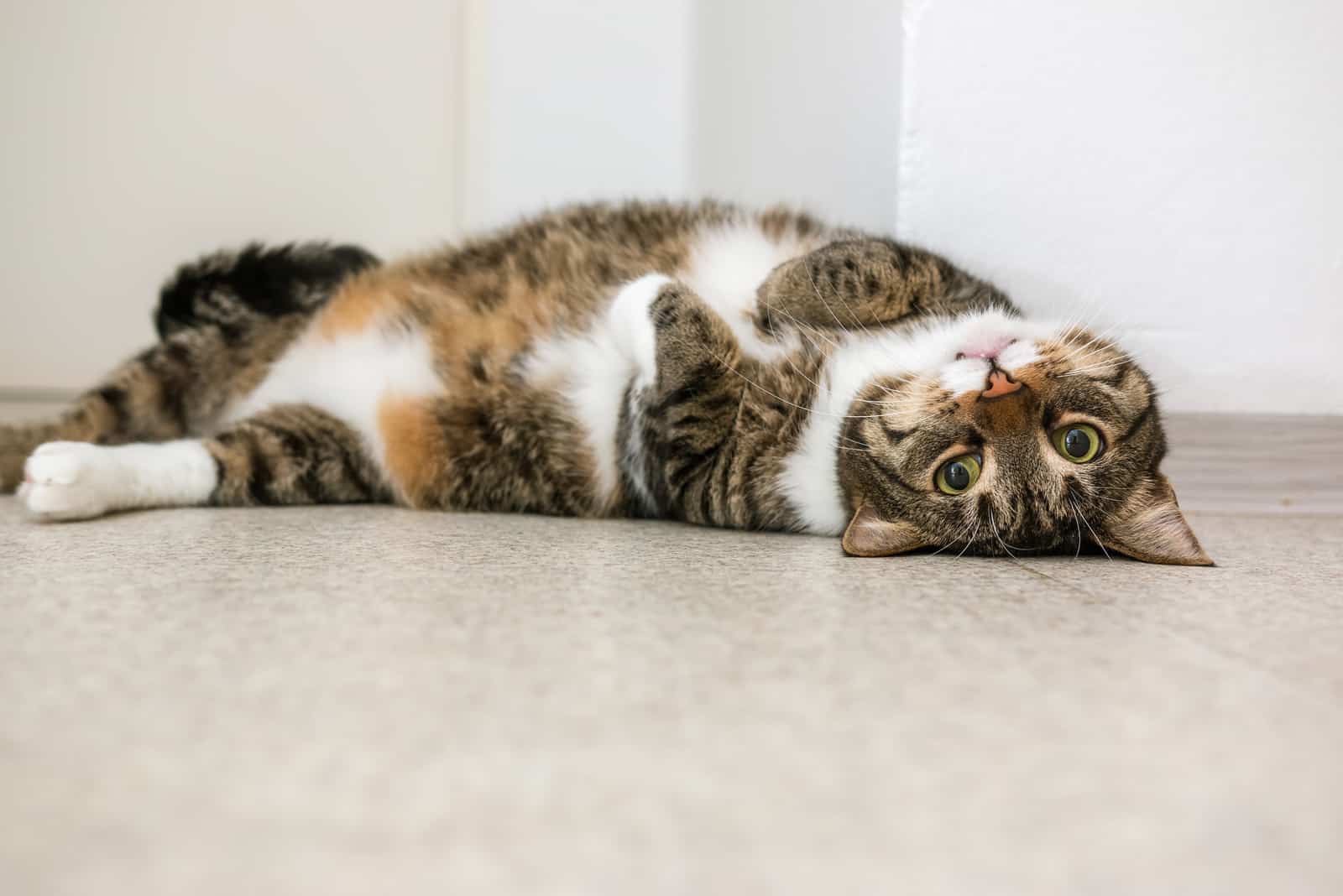 This has still not been concluded by scientists.

Many claim that rolling is connected with the hormones that are released in a mated cat’s system upon ovulation.

Some also say that rolling is done to dull the pain of mating, to release the pheromones that will attract other suitors, and to attempt eliminating the scent of the previous tomcat.

If you’re a cat owner, don’t be worried, because this is perfectly normal cat behavior.

How Do Female Cats Act When They’re Ready To Mate? 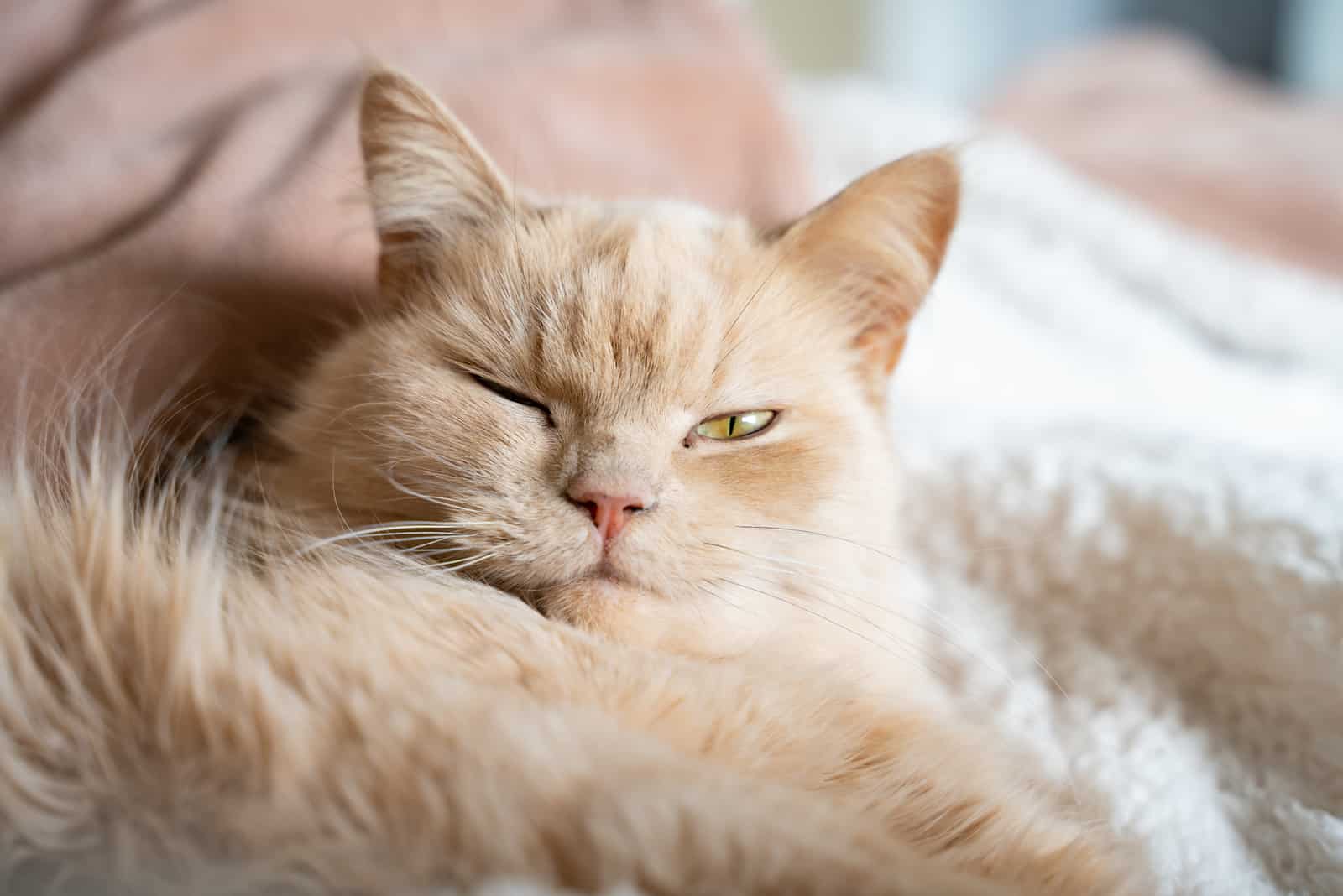 Female cats are very open when it comes to announcing their sexual maturity. Their actions and body language rarely leave any room for doubt.

Female cats will start catcalling, which entails rolling and loud yowling. This is how a cat announces that she’s in estrus, and the display may be more intense if a tomcat is around.

When a male cat approaches, the female will raise its tail and lower herself on her front legs (this stance is called lordosis).

The tomcat will grab the female by the scruff of the neck (to ensure balance) and proceed with insemination.

Then, the female cat rolls on the ground, meows shrilly, and waits for other potential suitors.

How many times a female can enter the estrous cycle depends on what breed the cat is.

Breed is also important for reaching sexual maturity. Some breeds need only several months to be able to mate, while others require at least a year.

Additionally, indoor and outdoor cats have different timelines for the estrous cycle.

While outdoor cats are usually in heat from January to August, indoor cats can be in heat non-stop.

Cats that don’t have an instinct to mate are almost non-existent, apart from spayed females and neutered males, of course.

We have mentioned earlier that female cats can birth kittens from different fathers at the same time. Various suitors will sense the female cat’s receptivity, and will be interested in mating.

When several tomcats wait for their opportunity to mate, it’s called a “brotherhood”. These new cats will wait for the initial mate to grow tired, so they can take his place.

Since the mating process lasts only a few minutes, cats can mate up to 10 times an hour.

When the first cat is finished, the female cat will choose an adequate male out of the “brotherhood” and invite him by assuming a lordosis pose.

How Did My Cat Get Pregnant? 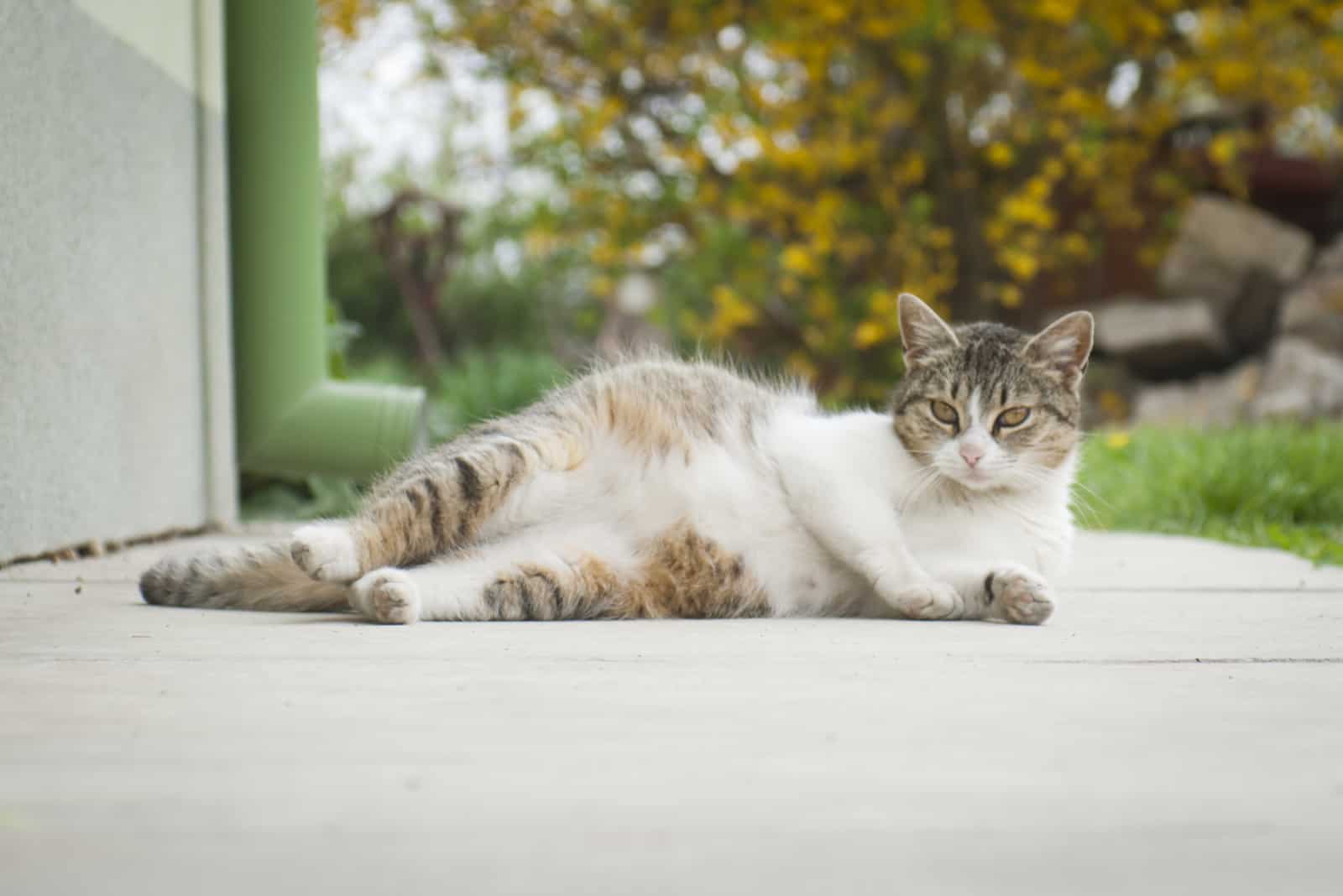 This probably happened because you didn’t spay your female cat. Your cat’s heat cycle started which prompted an unneutered male cat to seek your cat out and impregnate her.

Neutering has been the topic of many debates. It is essentially done to control cat pregnancies, especially in the case of feral cats.

Since cats can mate a few times a year, the best cat care for your female cat is to have it neutered. This is especially true if you have an outdoor cat, since it will attract the attention of feral cats, and you don’t want that.

Many breeds reach sexual maturity at around 4 months of age, and professionals suggest you neuter your cat at that time.

Breeders usually keep their cats unneutered, so they can keep supplying pet shops with kittens.

How Long Does A Pregnancy Last? 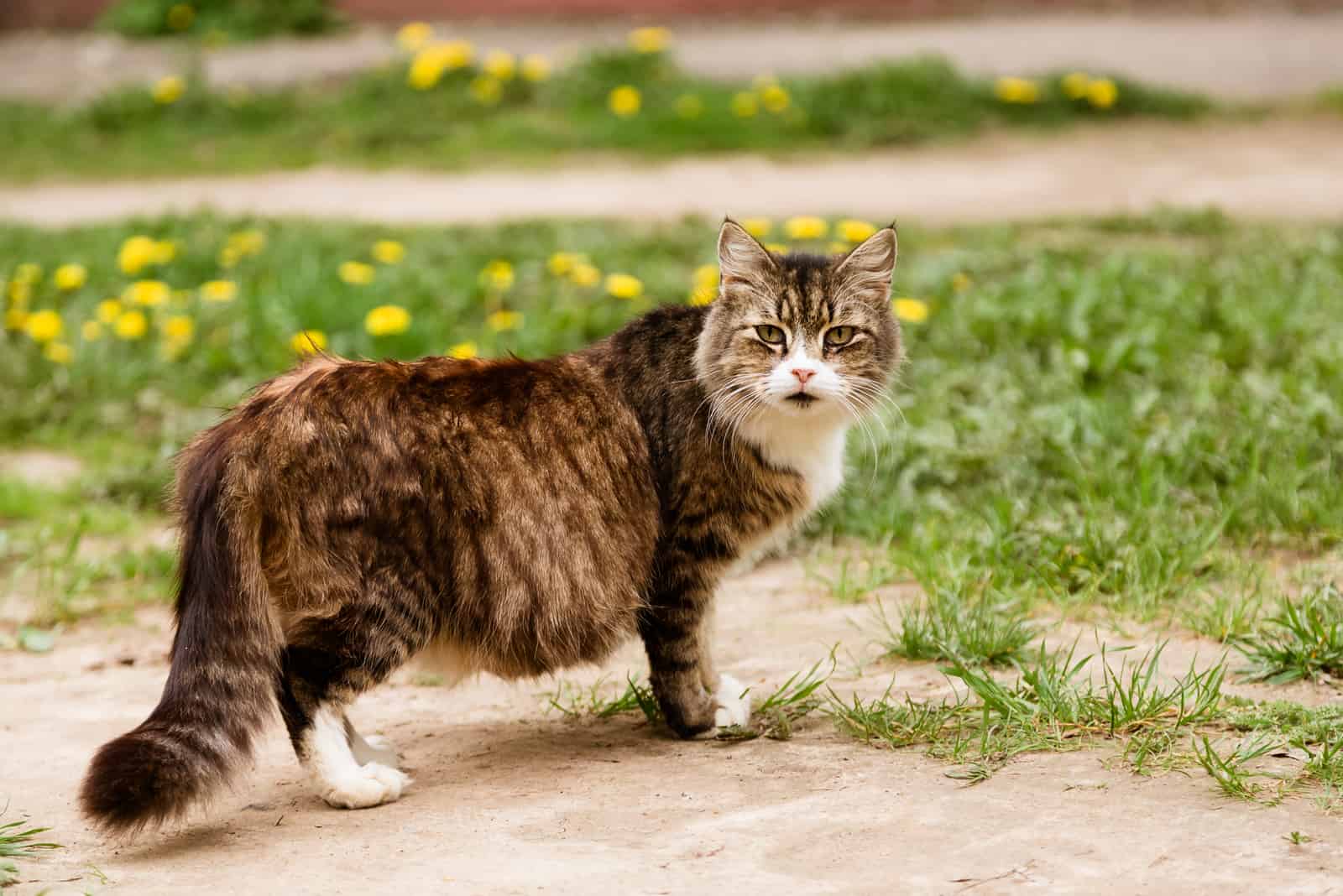 A typical pregnancy lasts about nine weeks. There are some variations, but you can usually expect newborn kittens in about 63 days.

You will notice your cat’s body growing in size. This will be gradual, and the first real sign you will notice will be the pinking of nipples.

When you notice the pinking and increasing prominence of nipples, you can be sure that your cat is due to give birth soon. This will be followed by a significant increase in size.

This would be the right time to inform your vet about the situation.

The first phase of birth can last from 12 to 36 hours. During this time your cat may appear restless, with excessive meowing and pacing.

However, you may not notice these signs.

The second phase is the actual birth itself. Your cat will go into labor, with obvious strain on her body. The first kitten will probably not appear before thirty minutes have passed.

The third phase consists of the after-birth protocol that a mother cat performs. Your cat will break the sac and cut the umbilical cord with her teeth. The birth of a kitten will always be followed by the placenta, which will be eaten by the mother cat.

Be advised, if your vet is not attending the birth, you have to check that your cat passes placenta after each birth.

The newborn litter of kittens will often be at least four little ones, so make sure you check each birth for placenta.

If you’re wondering “why do female cats attack males after mating,” don’t be worried.

This is perfectly normal behavior. The female cat feels pain from the barbs on a tomcat genital, which is why she responds aggressively.

If your cat still isn’t in heat, we suggest you prevent it happening by neutering her. This will make sure that you don’t have any unwanted feral cats hanging around your house.

If however, you want a litter of newborn kittens, or you didn’t manage to prevent a pregnancy occurring, we suggest you call a vet.

A professional’s help will make sure that the mother cat and newborn kittens get the proper care.

We hope this article helped answer some of your questions. Good luck!

How Do Cats Mate? A Full Guide To Feline Reproduction

How Different Are Male Cats Vs Female Cats? Pros And Cons - happywhisker

[…] Check this out: Why Do Female Cats Attack Males After Mating? Learn Now […]

How To Know When A Cat Is Done Giving Birth: 7 Signs

[…] Why Do Female Cats Attack Males After Mating? Learn Now […]