All cat lovers have wondered about their cat’s eye glow. I have often asked myself whether it’s normal for my cat to have glowing eyes!

Read on to find out more about this and learn more about cats with laser eyes that can glow in different colors.

Cat‘s eyes glow in the dark, this is a known fact, but why does this happen and what do different colors of eye glow mean?

All this is discussed in the text below, but I also briefly wanted to note some things about laser eyes kitty cats and their popularity.

There are many funny cat videos, stickers, memes and gifs called laser cat eyes or laser eyes cat, cute cat with laser eyes, or something similar, which have gone viral at some point.

There are compilations of the funniest cat videos reaching 3m views, even 17m views. My guess is that this is probably largely because of SNL’s episodes of Laser Cats. Many fans have made funny animal videos, t-shirts, posts etc.

SNL made their first digital short which received over 1m views, (you can check out the full video on youtube), and no one knows why exactly this went viral.

All this started in 2005, and later on, continued by having the star of Saturday Night Live, Bill Hader, talk about it for the fans. 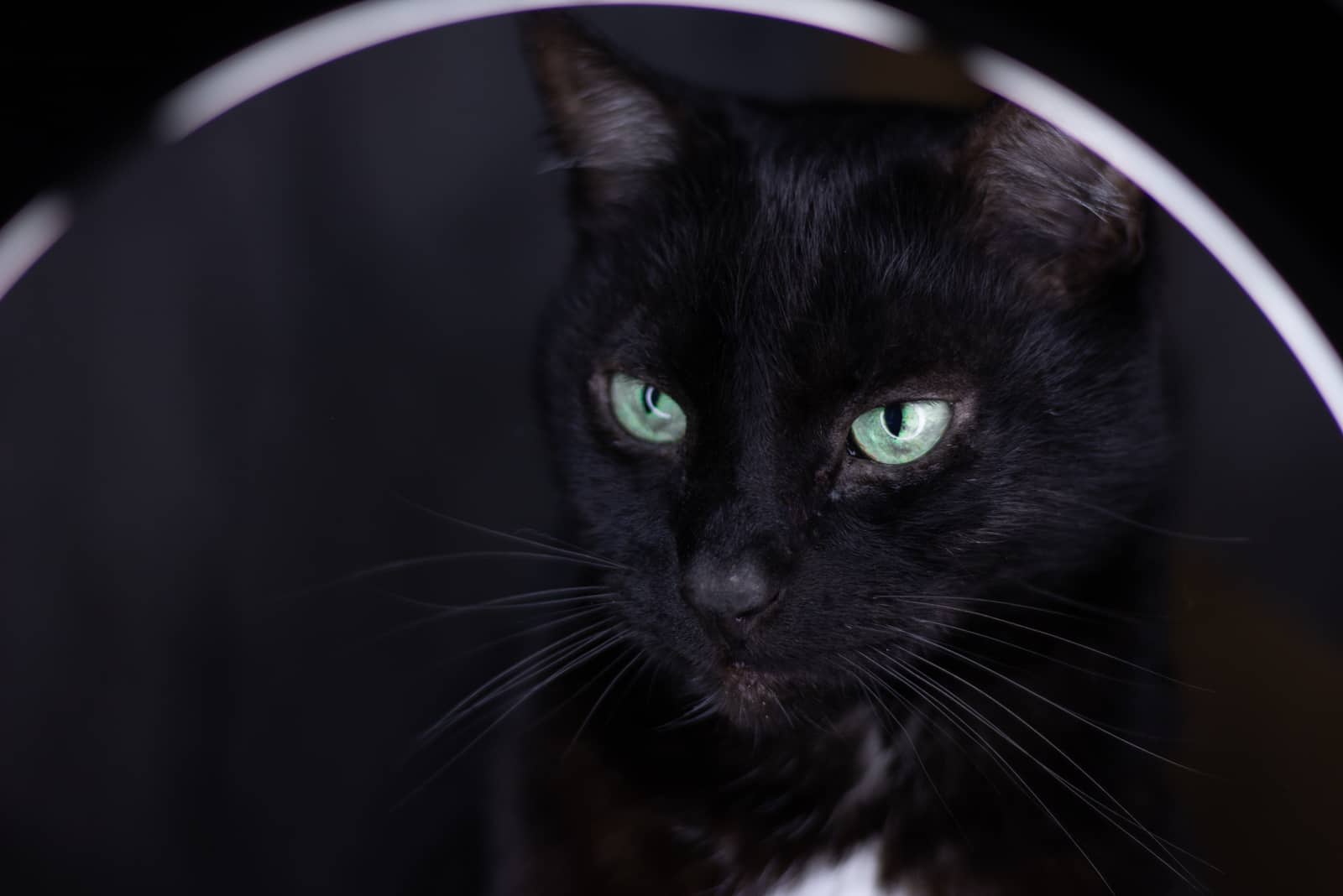 Cats’ eyes glow due to eye cells that reflect light. Cats, dogs, deer, and some other animals have these cells which are officially called tapetum lucidum.

The tapetum lucidum serves cats to see better when it’s dark by reflecting light through the retina of an eye, increasing the light that is available to the photoreceptors.

Basically, the tapetum lucidum increases vision sensitivity which further allows cats to see the light that we humans cannot see.

However, cats being able to see in complete darkness is a myth. Cats can’t see when it’s absolutely dark, but they do see much better than humans in lower levels of light.

Cats can see extremely well at nighttime, under low light, which is a trait inherited from their wild cat ancestors, but they don’t have full night vision.

Cats’ eyes can glow in different colors: red, green, yellow… So what determines the color of the eye glow?

The color in which your cat’s eyes glow varies from cat to cat and it depends on many factors. Fur and eye pigmentation are the factors that influence the color of the gleam the most.

There are two elements that are most commonly found in cat’s tapetum lucidum, they are called riboflavin and zinc.

Riboflavin is most commonly present in cat’s eyes, and the excess of any of these two elements, or the lack of them, will have an impact on the cat’s eye color when glowing.

This is the most common color when it comes to how a cat’s eyes glow in the dark. This is because the most common cat eye color is green. Cat breeds that are known to have green glowing eyes include:

Other eye colors in cats can also glow green, and sometimes if a cat has green eyes their eyes might glow in a different color. Sometimes there are differences between kittens and cats of the same breed.

Cats that have blue eyes, e.g. Siamese cats, usually have yellow glowing eyes or eyes that glow in golden shades. This is natural and there is no need to worry.

In some other cat breeds, yellow glowing eyes could also mean that the cat has ingested too much riboflavin, probably through their food.

When this vitamin is ingested in large quantities it can damage the cat’s liver. However, this rarely happens, but if you have any concerns you can change your cat’s diet or talk to your vet.

Primarily consult with your vet, and then you can add more animal-based food filled with fats, protein, and taurine.

However, don’t exclude riboflavin, since a lack of it is even more harmful than an excess of it.

When it’s dark and a cat’s eyes glow in red color, it is most usually a sign that the tapetum lucidum is failing. This commonly happens to old cats because the cat’s eyes are slowly degrading as they get older.

However, a cat’s eyes can sometimes glow red when a cat is surprised by a sudden beam of light. When cats don’t expect the light, their eyes quickly dilate and their eyes show a red-colored glow, which is only temporary.

It is a known fact that all kittens have blue eyes when they’re born, so all young cats have blue glowing eyes.

A cat’s eye color changes when they reach adulthood, but there are many cat breeds that remain blue-eyed, e.g. Siamese, Persian, Javanese, Birman, Balinese, and so on.

When cats have blue eyes which also glow in blue color, this is quite a normal occurrence, but when a cat is white with blue eyes, it might mean that they are prone to early blindness.

This later usually changes to their eyes glowing red in the dark, and this suggests that their tapetum lucidum has lost its proper functionality.

However, if this happens suddenly, it might suggest that your cat’s vision might be failing, and usually, this happens in one eye. 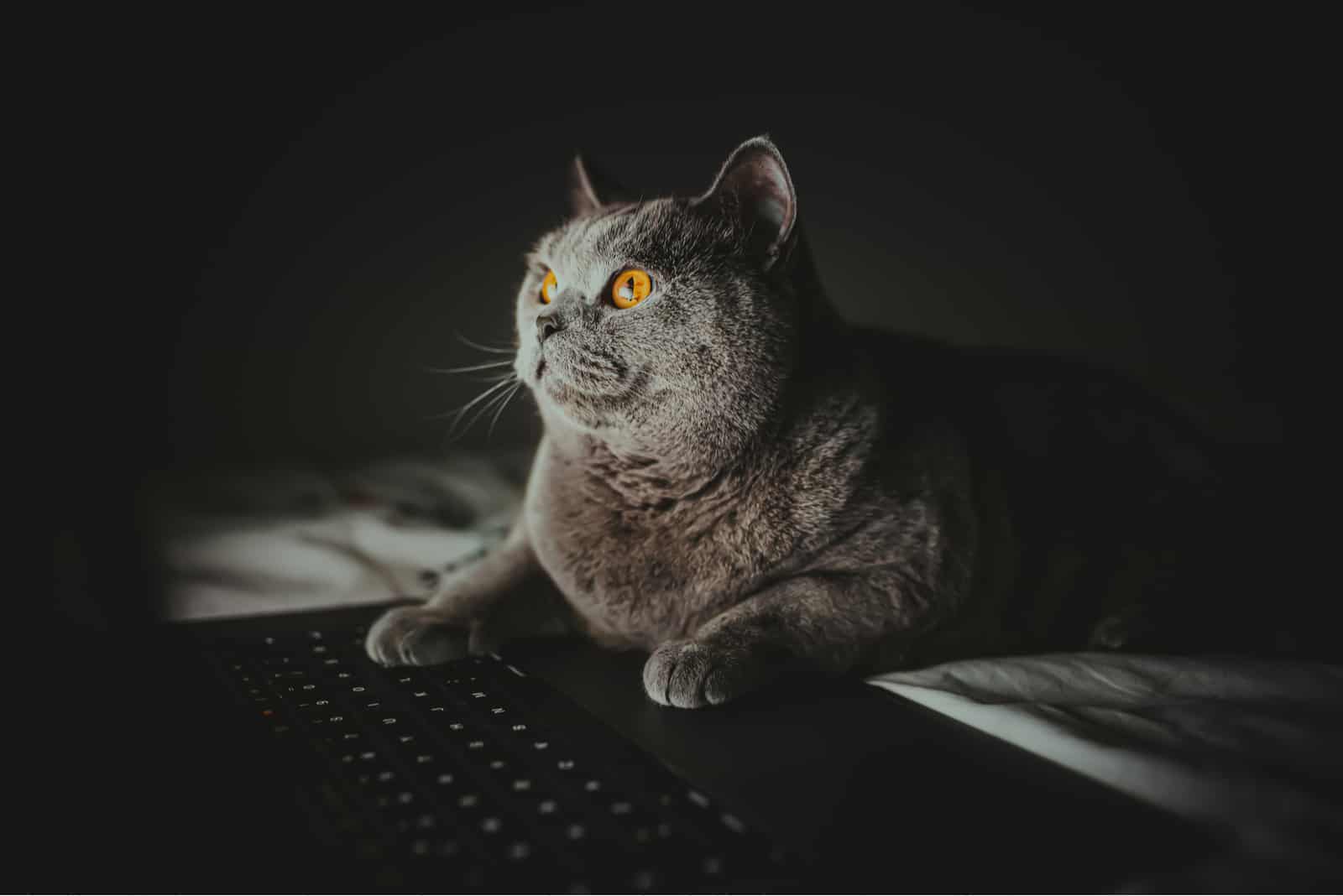 A cat’s eyes should be glowing whenever it is dark, or whenever a cat is exposed to lower light conditions. If a cat’s eyes aren’t glowing, it might mean that they can’t see very well either.

If a cat’s eyes aren’t reflecting light, it means that the light isn’t getting to their tapetum lucidum and this may mean they are not able to see in the dark at all.

There are different reasons for cat eyesight issues, including:

🐾 Cataracts (one or both eyes)

🐾 Deficiency of vitamin A

The light needs to reach the tapetum lucidum in order for a cat’s eyes to glow, i.e. for it to reflect the light. If you have any doubts about your cat’s vision and overall health, it is always best to see the vet.

You can also test your cat’s vision at home. While your cat is alert, during daylight, you can try dropping something light on the floor, something that won’t make a sound e.g. a feather, and see if your cat will try to catch it.

You can also shine a laser light in front of your cat’s eyes to see their reaction, or you can shine a dim torch into their eyes to check whether your cat’s eye will contract.

Another thing to do is to monitor your cat’s usual behavior. When they’re climbing cat trees or stairs, watch how they move or how they get to their cat food or water bowl.

Cat’s eyes should glow when a cat is exposed to low light or when it’s dark, but if they glow during daylight, then something might be wrong.

If a cat’s eyes glow in daylight, this usually suggests that the cat’s pupils are dilated and are therefore attracting more light, even if it isn’t necessary.

During the day, a cat’s pupils should narrow in direct light.

If their eyes glow in daylight, it might mean that your cat has ingested toxins, their blood pressure is too high, their eyesight might be diminishing, or your cat is stressed or anxious.

When a cat’s eyes glow in daylight but only sometimes, or shortly and rarely, it is not worrying. This might happen when they widen their eyes due to playfulness, interest, or when they’ve spotted their prey.

Cat Playtime With Laser Pointers: Smart Or Not?

All cat owners have probably tried playing with their cats using laser pointers, at least once. It is fun to watch your cat following the red dot, but all good owners will also wonder whether it is safe or not.

Cats require exercise and playtime, some cat breeds more than others, but all of them at some period of their lives need playtime.

All cat owners try different methods and games, and laser pointers can be particularly fun, as long as they are used properly and safely.

Cat’s protective reflexes, and their eye protection i.e. blinking, is not enough to protect their eyes from laser light.

When you use laser pointers for playing with your cat, use them safely in the following way: never shine laser beams directly into the cat’s eyes, only use a laser with a maximum of 5 milliwatts power, and store the laser so your cat doesn’t get hold of it.

It is so important to follow this advice in order to protect your cat’s eyes from damage.

These safety instructions are also applicable to other light sources, or anything your cats like to chase or play with that has light.

Additionally, if you’re not sure about laser pointers, you can simply avoid using them.

There are many different toy options and playtime ideas. Cats tend to be demanding in other things, but when it comes to playtime they are fairly easy to please.

Cats love boxes, and they will chase anything you can find if you make it move. Shoelaces? Bring it on! There are also different cat toys designed for cats, such as toy mice, balls, tunnels… There are plenty of choices to replace lasers!

As we have seen, there are many different reasons why, when, and in what color cats’ eyes glow. A cat’s eyes can glow green, blue, red, or yellow. They can also glow in two different colors, as cats can have each eye in a different color.

The color of the eye glow is impacted by a cat’s fur and eye pigmentation, or a cat’s age since the older the cat gets, the less effective the tapetum lucidum is.

The main thing that influences the color of your cat’s eye glow is the cells that are present in the tapetum lucidum.

Tapetum lucidum are cells that enable a cat’s eyes to reflect light, and this helps cats to see better when it’s dark.

These cells reflect the light through the retina of the eye, increasing the amount of light that is available to the photoreceptors.

I hope that this expands your knowledge and answers your questions about your cat with laser eyes.

I‘ve shared some interesting facts about the cat‘s eye color glow but also some important information about some possible issues that might be associated with it.

I hope you liked this article and have learned something new!

The Meaning Behind Cats Pupils: Understand Your Kitty Better

[…] eyes have some amazing features. They are incredibly efficient, stunningly beautiful, and they glow in the dark! They are also closely connected with a cat’s […]

What's A Cat's Favorite Color? Do Cats Even See Colors?